From the beginning, the public saw the civilian Jeep as a multi-purpose vehicle. In addition to its off-road talents it was probably the most versatile vehicle for tight urban traffic and difficult parking. In the countryside and suburbs it could handle the most inclement weather and sometimes go where no other vehicle dared go. With a good top it was a perfect vehicle for small deliveries. Hard top makers saw the potential and some began advertising their tops as just right for delivery vehicles.

Some manufacturers took their tops more seriously than others. This S & B all-steel panel truck body, seen in the 1949 Willys Special Equipment catalogue, transforms the Jeep into a vehicle almost unrecognizable as a Jeep. Apparently some serious cutting away of the tub was necessary to install this panel body (see how EASY it is to install, 40K GIF.)

However bizarre this top appears, it represents an attitude of Jeep owners and suppliers. A Jeep can do, or become, anything you can imagine. See also a proposed Willys large-bodied delivery truck (50K JPEG), one of many Jeep designs which was never put into production. 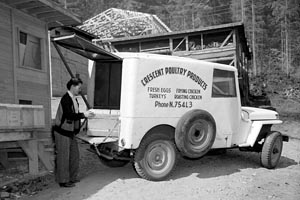 This 1947 photo shows a similiar enclosure on a CJ-2A in the Vancouver BC area. It appears to have a lengthened frame rather than the overhang on the rear, and this example has no door on the passenger side. An interior view photo (80K JPEG) shows wooden slats to provide roof strength, and a sliding door for the driver. Photos by Jack Lindsay, courtesy of the City of Vancouver Archives. 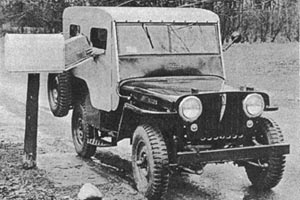 Laurel C. Worman, Inc. advertised their Jee-Cab as a rural postal delivery cab. Typical of lower priced aluminum hard tops, their door windows were very small and I think totally inadequate for efficient rural mail delivery. Worman tended to advertise their Jee-Cab tops as being whatever the market wanted. This photo shows a 2A with a Worman Jee-Cab aluminum full cab. 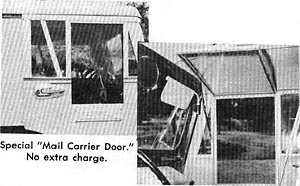 Another hard top maker, the Carson company of Oklahoma City, made a genuine effort at designing a functional mail delivery full top. Carson, in 1949, featured an optional postal delivery door on the passenger side of its CarCraft Jeep Top. While probably not the best solution, it offered the delivery person reasonable access to the rural mailbox and indicates that hard top manufacturers were getting serious about rural mail delivery possibilities. 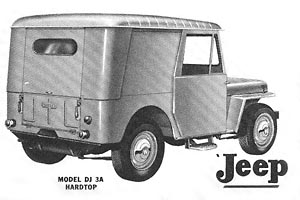 The Dispatcher was introduced in 1956 as a two-wheel-drive light delivery vehicle (80K JPEG). The lack of rear side windows suggests that this was meant to be a standard delivery vehicle, although it of course could also be used for rural postal delivery. Doors were available either as sliding or hinged.

Comparing this Willys top with other brands, it comes off as arguably the best-thought-out top for delivery purposes. Sliding doors and easily operated rear door make it ideal for small package delivery. The rear panel slides up under the roof for easy access to the cargo area. 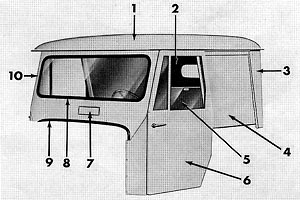 This diagram from the 1962 Jeep Universal Parts List shows the DJ-3A Dispatcher enclosure with integrated windshield. Although the top could be removed, a standard CJ-3A windshield frame would have to be purchased to replace the DJ windshield. The sliding door has a manual lift (non-cranked) window.

For more on DJ hardtops, see the The DJ-3A Dispatcher on CJ3B.info. 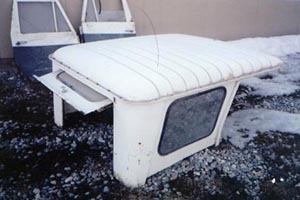 Willys offered a similar top for the CJ-5, but this time with large rear side windows. This example owned by Bill Mentz, shows the garage-door-style rear gate and plastic roof. The roof ribs were used on many Jeep vehicles into the 1970's. On Bill's hard top the doors are hinged. Certainly this is the most sophisticated removable full top ever sold for civilian Jeeps. Jim Allen and other authors have mentioned that this top was built for Willys by Koenig, although it carries no Koenig identification and was apparently sold only through Willys dealers. 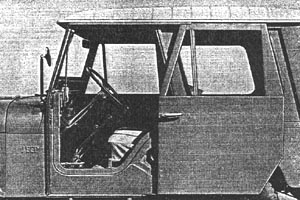 An advertisement for these tops shows one on a 1955 CJ-5. It states that sliding doors are available as a "factory installation only," while swinging doors are for "factory or field installation." Both models have sliding door windows and a rear door panel that is self-supporting in the open position. 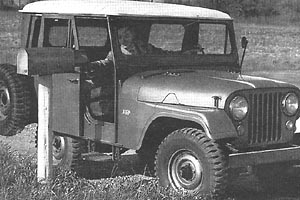 An early CJ-5 with Willys Motors hard top and sliding door option was about as close to a perfect postal delivery vehicle as it was possible to get, prior to the development of the actual Post Office Jeep. Some rural mail carriers bought these to better do their job long before the government postal Jeep became official. Even with left hand steering it appears fairly easy to reach across and into the mailbox. One would think though, that the spare tire should be removed from the passenger side. This factory photo is found in Patrick R. Foster's Story of Jeep. 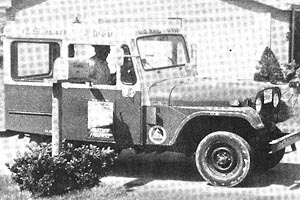 The DJ-5 Dispatchers were built from 1965-70 by Kaiser. These two-wheel-drive delivery vehicles had either right-hand or left-hand steering, and used the same Hurricane F4 engine used in the CJ-5. Pictured is a DJ-5A Dispatcher 100 built for the Post Office starting in 1968. It had a Chevrolet 4-cylinder engine and PowerGlide automatic transmission and did not require the extended radiator guard found on the later DJ-5B. It also did not have the reflectors, mirrors or vented roof that became standard on postal Jeeps. 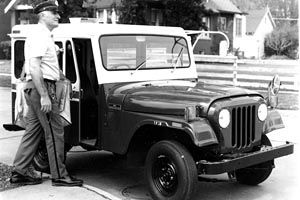 The DJ-5B and subsequent postal Jeeps built by AM General (American Motors' division for government contracts) have the characteristic bull-nose grille, fender-mounted parking lights, and mirrors galore. Instead of redesigning the front end, only the radiator guard was extended, to allow space for the American Motors straight six-cylinder engine. These Jeeps were built by AM General in South Bend IN.

In the 1950s the Post Office switched from olive drab to a red, white and blue paint scheme for its vehicles. The white top was intended to reflect summer heat, the blue was supposed to show less dirt than other colors, and the red reflective stripe was to make the vehicle more visible. 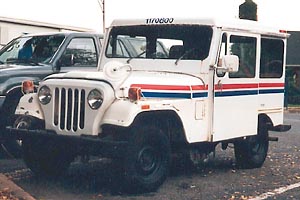 In the late 1970's the Post Office decided to cut costs and perhaps improve safety, by painting their vehicles all white, with narrow red and blue stripes. By the 1980's the short wheelbased postal Jeep suffered from bad press as a dangerous vehicle, and although the U.S. Postal Service was supportive of the postal Jeep as a safe vehicle when driven as designed, the negative publicity forced them to begin retiring them.

I bought one (left hand steering) for $800 and had several years use out of it as a family car and delivery vehicle for my small business. In the summer I would often open both sliding doors, the side vents and the roof vent, and travel fairly comfortably in my non-air-conditioned Jeep. As the last of the Post Office Jeeps were being retired they were scrapped rather than sold to the public. A sorry end for a fine vehicle.

It is interesting that, after the demise of the Post Office Jeep, American Motors lost interest in the Jeep as a small delivery vehicle. Some rural mail deliverers, however, are still eager to find working ex-Post Office Jeeps to more comfortably do their job. -- Bart McNeil 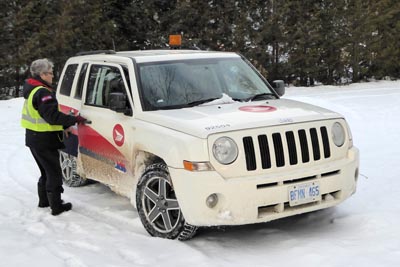 A 2017 update: Canada Post has some right-hand-drive Jeep Patriots in use by rural letter carriers, including Betty who brings the mail to CJ3B.info. -- Derek

Continue to Carson Car Craft Jeep Body or return to the Table of Contents.

Thanks to Bart, and to Dan Fedorko, Steve Bovee, Joe Caprio and Todd Kerzic for pictures for this article. -- Derek Redmond