Laurel C. Worman, Inc. was possibly the first manufacturer of aftermarket Jeep hardtops. Roy Worman, the grandson of Laurel Worman, was surprised and delighted to see his grandfather's name on this brochure on CJ3B.info. The surprise to us was when he revealed that Worman was a Toledo car dealer, and the manufacture of hardtops was a sideline. In his Packard/Willys dealership he discovered soon after World War II that there was a market for hardtops, and began building and selling them through Willys. 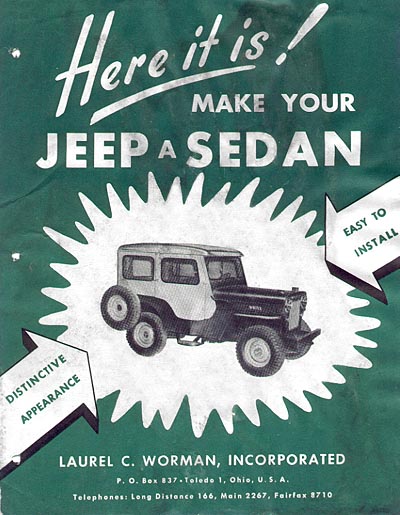 This early-1950s brochure advertises the "Jeep Sedan Body" built by Laurel C. Worman, Incorporated, Toledo, Ohio, also makers of "Jee-Cab" aluminum hardtops. The cover image shows their top of the line, which they refer to as a "Sedan Body." It was available in either steel or aluminum, with roof made of plastic. Although using the term "sedan", they also suggest that it has the features of a "station wagon."

The text reads in part: "For the past five years we have been planning and engineering this completely new Jeep Sedan Body... built in response to the many requests and practical ideas presented by satisfied Worman JEE-CAB owners during the past five years. This body has many features never before incorporated in any Jeep body or metal enclosure. The Jeep Sedan Body will change the appearance of the Jeep and definitely make it have the characteristics of a station wagon. It will make any owner proud because of its individuality."

The open brochure (180K JPEG) has a detailed description of the features, and also describes the "regular" Jee-Cab models. The term "regular" differentiates them from the more expensive and newly designed Sedan Bodies.

The Sedan Body was an attractive top, but either it didn't sell well or tended to deteriorate with age, as we have found no examples of this top on or off a Jeep. Possibly the plastic roof might have broken down prematurely in sunlight. 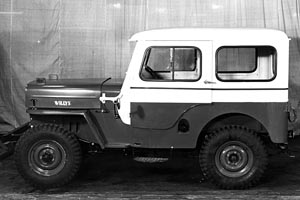 Willlys apparently incorporated a Sedan Body as part of a 1953 proposal to sell the CJ-3B to the U.S. Post Office. The windows with two panes of glass sliding horizontally on tracks, would likely have been inconvenient for mail delivery, and in fact it's strange that the Sedan Body did not feature the vertically-opening windows which Worman had already incorporated into an earlier "Mail Carrier Jee-Cab."

See also a rear view (100K JPEG) which reveals that the top is actually just sitting inside the Jeep's body for these photos. See more details in U.S. Mail Via CJ-3B on CJ3B.info 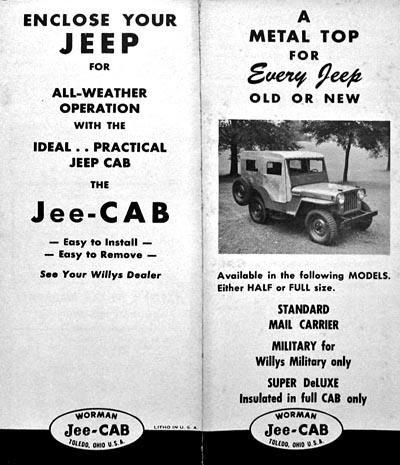 A 1940's Worman brochure shows the earlier Jee-Cabs. They are all-aluminum and are strikingly similar to Koenig's less expensive steel hard tops and most of the Sears steel and aluminum tops.

The open brochure (130K JPEG) describes the features of the Jee-Cabs, including the "Mail Carrier" with vertically-opening windows, the "Military", and the "Super Deluxe" insulated version shown on the cover.

The identifying features of these Jee-Cabs seems to be the bottom silhouette of the aluminum sides which is roundish starting in front of the door and following the curve of the body opening fairly closely. Most other tops are either angular or have a sharp corner where the bottom of the door begins its rise. This minor difference is about the only feature that sets them apart visually from other less expensive hard tops of the time. 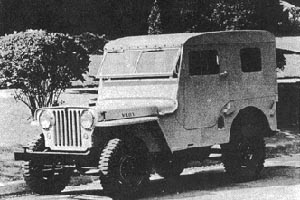 Willys showed Jee-Cabs in its 1949 Special Equipment Book, including this full-length top (140K GIF) on a CJ-2A.

See also interior views of the Super De Luxe Jee-Cab (140K GIF) which was a standard cab fitted out with insulation. 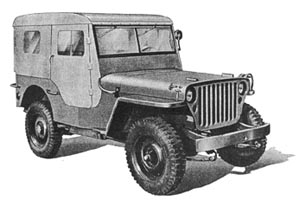 The military Jee-Cab was designed for the Willys MB, and had removable doors and lift gate. The weight of the full aluminum cab was 55 pounds. 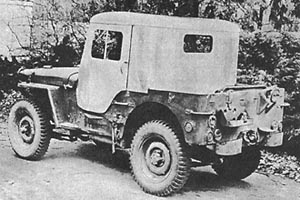 The military half Jee-Cab had a similar rounded top. All versions, early and late, appear to have had the distinctive rounded door.

See also the civilian half Jee-Cab (140K GIF) with a larger rear window. 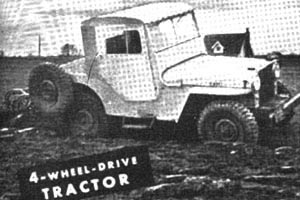 A pre-1950 Willys-Overland advertisement seen in Patrick Foster's Jeep has two images which are worth examining. Both hard tops pictured on CJ-2As are Worman Jee-Cabs although there is no mention of Worman tops in the advertisement. See the full page ad (200K JPEG.)

Research by Dave Eilers for his article on Laurel C. Worman in The Dispatcher magazine (Winter 2016/17) shows that Worman ended his relationship with Packard and Willys in 1955, and opened a Pontiac dealership. This left the hardtop market to various other manufacturers of steel and aluminum tops.

Continue to Sears Steel and Aluminum Tops or return to the Table of Contents.

Thanks to Bart, and to the Bovee family for the Willys-Overland 1949 Special Equipment Book images. The 1950s Jeep Sedan brochure is from Bob Stewart. -- Derek Redmond