Although I've seen references to the use of jeeps as fire engines during World War II, several 1940's U.S. military fire apparatus manuals (collected by Portrayal Press in the publication U.S. Army Fire Trucks at War) do not mention the use of jeeps. There were trailer-mounted pumps (40K JPEG) built by Hale Fire Pump Co. and other manufacturers, but James G. Davis, who served in a WW II Army Engineer Fire Fighting Platoon that had both Jeeps and Class 1000 Trailer Mounted Fire Fighting Pumpers (TMFFPs), comments that "From personal experience I can tell you the jeep was not suitable to tow the Class 1000. There was a limitation of 1000 pounds as a towed load for the jeep while the Class 1000 weighed 3500 pounds."

U.S. military fire trucks were generally painted olive drab rather than red, and Jim adds, "Our jeeps (OD, of course) mounted a red light and small siren and carried a few extinguishers and hand tools, but were scarcely what one would call a fire fighting vehicle." 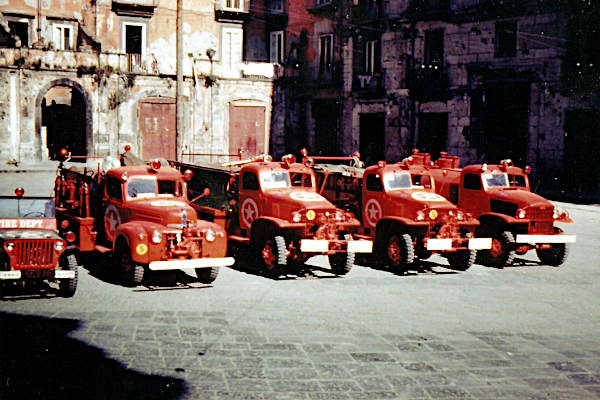 One of the few jeeps seen in the photo galleries of WWII Army Fire Fighting Platoons at Fire Trucks At War, is the Chief's buggy of the 1201st Engineer Fire Fighting Platoon in Naples, Italy at the end of the war in 1945. Photo copyright James G. Davis, from his book Fire Fighters In Fatigues.

The jeep stands alongside a fearsome lineup of Ford, Chev and GM CCKW trucks. 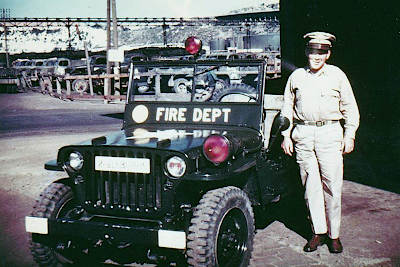 Lt. Robert T. Burns was Commanding Officer of the 1201st Engineer Fire Fighting Platoon (and later a Battalion Chief with the Philadelphia Fire Dept.) This photo from the Don Perry collection shows Lt. Burns with his jeep at Oran, Algeria in 1944. It's probably the same jeep seen above, prior to its postwar repaint.

Chief Burns described the adventures of the 1201 EFFP in North Africa and Italy during WWII in his book Burns on Blazes. 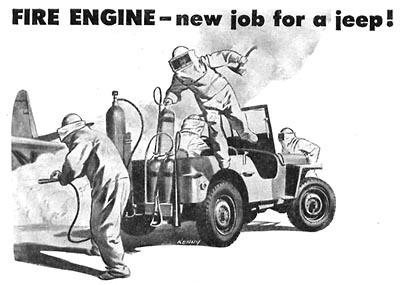 A September 1944 advertisement for Walter Kidde & Company (found by Brian Gough in Popular Science) shows an example of a Willys MB or Ford GPW carrying extinguishers. The text in the full page ad (150K JPEG) reads:

"Coast Guard airports find a new job for the versatile jeep. They've manned it with asbestos-clad fire-fighters, loaded it with Kidde carbon dioxide extinguishers. This tough little 'fire engine' can rush right up to crash-fires or other blazes, hit them hard and fast with fire-smothering carbon dioxide gas." 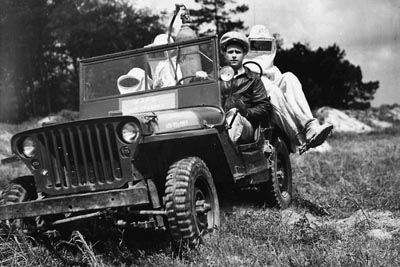 A photo found by Gary Urbanowicz seems to confirm that the Kidde advertisement was closely based on U.S. Coast Guard practice. The only noticeable difference in this 1944 picture from Elizabeth City Air Station in North Carolina, is that the driver is not suited up in asbestos. 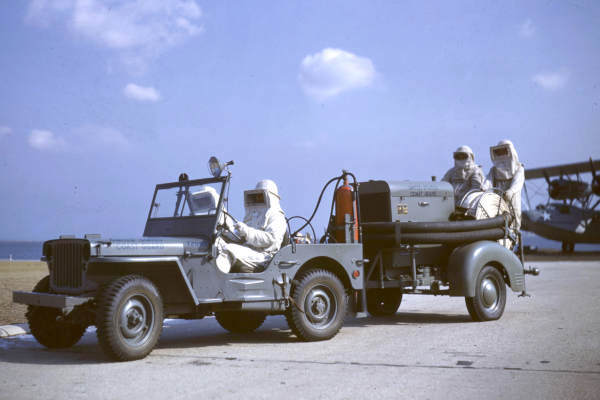 Four firefighters in proximity suits (one with bolt cutters in hand) man this Coast Guard crash unit in an amazing 1943 photo found by Federico Cavedo at the Smithsonian National Air and Space Museum. The jeep loaded with CO2 pulls a trailer equipped with pump, suction hose and plenty of attack hose.

In the background is a Hall PH-3 flying boat, used during the war in an anti-submarine role, as well as search and rescue. 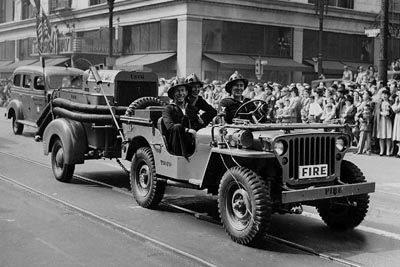 Here's a similar USCG unit, with a radio-equipped jeep and trailer, in an undated photo of a Los Angeles parade. Can anyone provide more information on this? Judging from the petty officers' expressions, maybe it's a VJ Day parade. 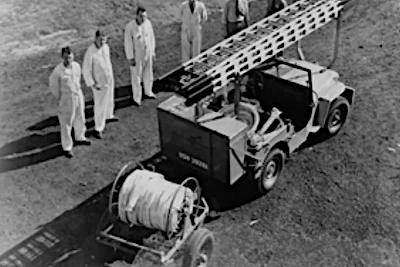 This just might be the first fire Jeep equipped with ladders. This GPW was converted by the Fire Department at the U.S. Naval Ordnance Plant in Indianapolis. It's seen here pulling a hose reel, although it doesn't appear that the Jeep carries a pump. 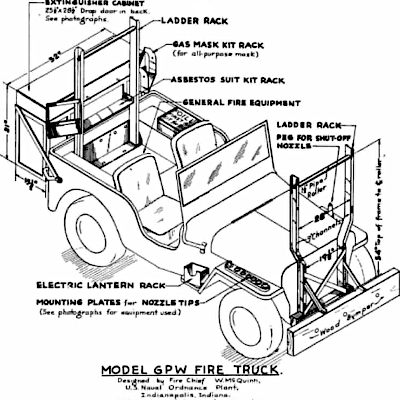 An undated drawing of the design by Fire Chief W. McQuinn shows the ladder rack, extinguisher cabinet on the rear, and brackets for equipment and asbestos suits. The purpose of the wooden front bumper isn't clear. Possibly there is room for a small portable pump behind the seats. 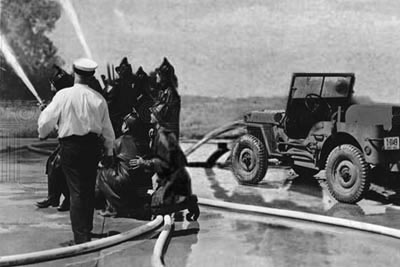 Willys was already experimenting with pump-equipped MBs during WWII. A photo in the February 1944 Popular Mechanics was captioned, "At the Willys-Overland Motors plant, the jeep performs many of the duties of a full-sized fire wagon. Built for for quick dispatch to factory areas that cannot be reached by larger apparatus, it is equipped with a 500-gallon-per-minute pump, and carries 375 feet of fire hose." 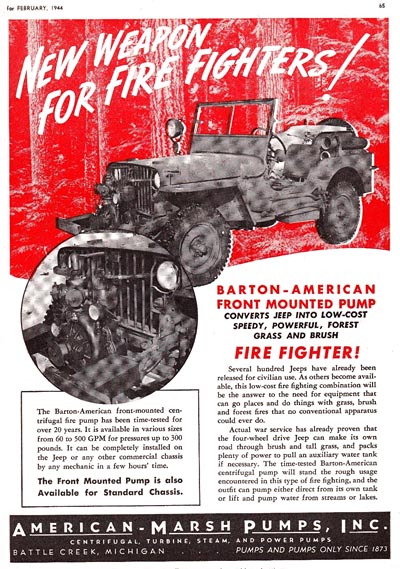 American Marsh Pumps, who provided the pump, were also quick to promote the use of the jeep for firefighting. The early slat-grille MB shown in their 1944 ad is possibly the same jeep seen in the photo above, which also seems to show a spotlight mounted on the passenger side. 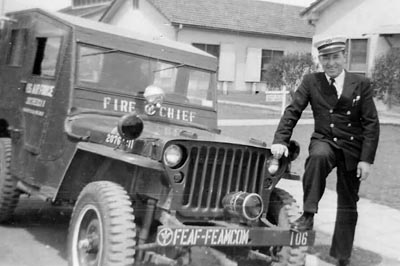 The civilian Fire Chief with his hardtop USAF MB at Tachikawa Air Base in Tokyo, circa 1953. Tachikawa had been a Japanese airfield and aircraft factory during World War II, and became a U.S. Air Base from 1945-77, serving Far East Air Force (FEAF) and Far East Air Materiel Command (FEAMCOM) and playing a major role in troop and material transport during the Korean War. Japan's National Emergency Response Center is currently housed in the extensive system of underground bunkers built under Tachikawa during World War II (Wikipedia). 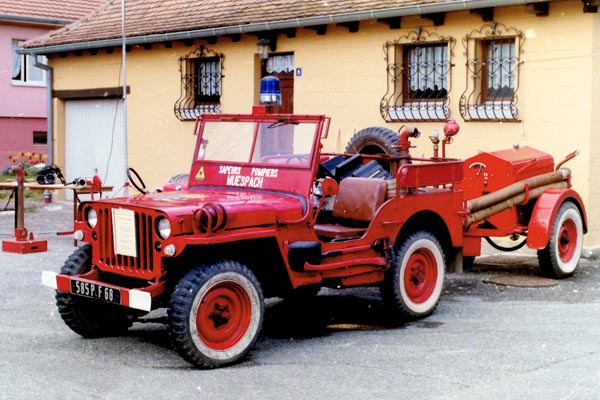 The French fire service made extensive use of WWII surplus jeeps (and the later M201 version built by Hotchkiss) to carry hose for a pump trailer.

This M201 from Muespach in northeastern France is seen at a fire apparatus display. Photo courtesy turbex44 at autotitre.com. 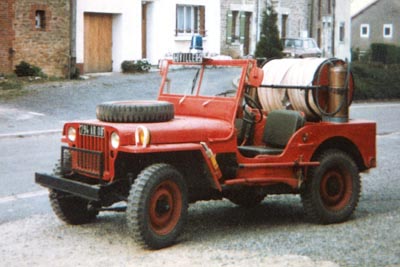 French fire Jeeps were referred to as VLTT (Véhicule Léger Tout Terrain or "light vehicle all-terrain"). They frequently had the spare tire on the hood, to improve accessibility to the hose in the rear. This example has also had a large hose reel mounted. I'm not sure of the location of the photo -- there are a number of towns in France called Villers. 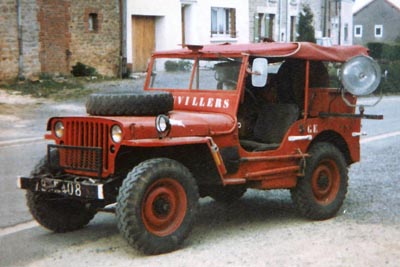 Another Jeep in the same town had an unusual setup with two large floodlights, and in the rear apparently a generator and a large reel of cable or hose. 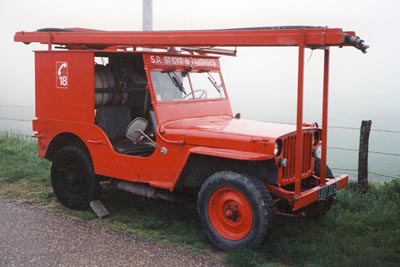 Saint-Cyr-de-Valorges is in the Loire Valley, where Jeeps seem to have been very popular with the fire service. Their M201 has a hardtop and an overhead rack for ladder and suction hose. 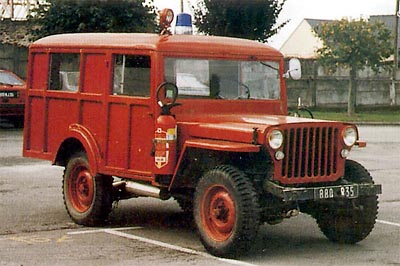 Another hardtop is this conversion in the enclosed hose wagon style that is more traditional in Europe than North America. I don't have any details on this particular piece of apparatus; the photo is courtesy of Francois Chevestrier, from Old Woodies. 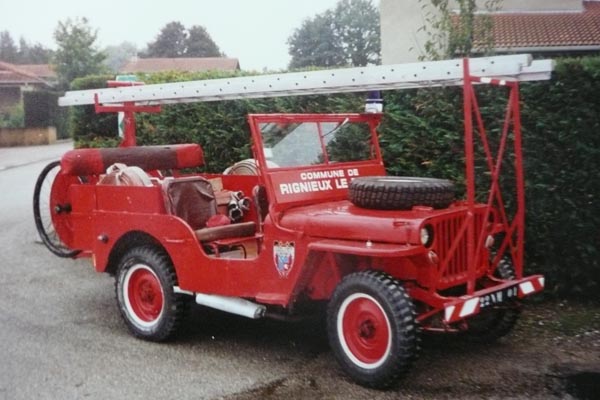 This elaborate conversion has an overhead rack, rear body extension, huge hose reel hanging off the back, and a trailer hitch extending out past the reel. It must have struggled to pull a trailer on the steep roads around Rignieux-le-Franc in the French Alps. 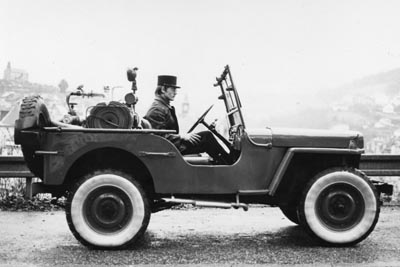 This beautiful photo (150K JPEG) was taken in Villeneuve Sur Lot in southwestern France, and is courtesy of Véhicule de pompier ancien.

There are a number of toys based on French fire jeeps -- see Willys MB Fire Jeep Toys on CJ3B.info. 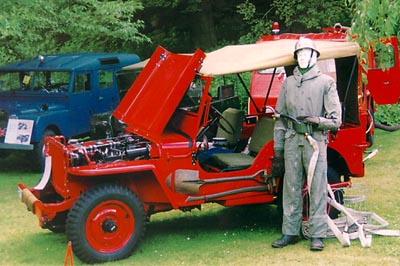 This 1944 Willys MB belonging to Ola Svensson came to Sweden as surplus in 1946 and served in the Brandstorps fire station in Hjo. It reportedly had a pump installed at the front, and pulled a trailer with a 500-liter water tank. The photo taken at a military vehicles show appeared in the 2001 calendar of the Willys Jeep Klubb of Sweden. 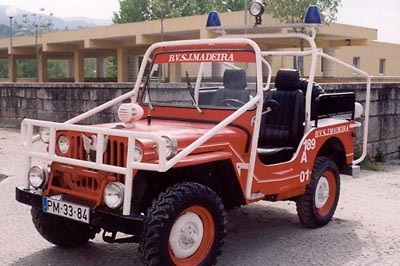 In St. Joäo da Madera, Portugal this MB is classified as a Command Car, but the full brush cage and extra lighting suggest it sees some off-road use. Photo by J.M. Tomàs. See Historical Fire Engines Europe for more Willys Jeeps in Portugal. 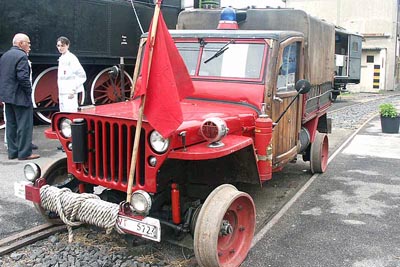 These two photos were spotted by Legori Paolo Armando at Le "Giornate Fiorentine" 2006, documenting a 2006 convention of the Fiorentini Railway Modellers Group and the Leopolda N Scale Museum in Italy. 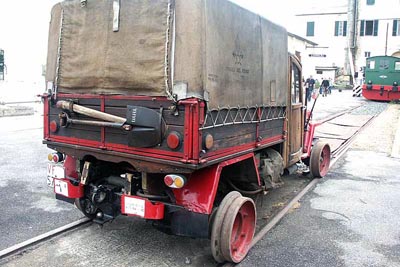 The comments there are a nice summary of the importance of preserving things like old Jeeps: "A museum makes us realize how far we have come, step by step, perhaps without noticing the continuous small changes taking place around us. If things of our past are properly maintained, we can clearly see this long journey traveled in little steps. The fire service once counted on this not very modern, but uniquely charming vehicle, a World War II jeep adapted for use on rails and equipped to the nines." 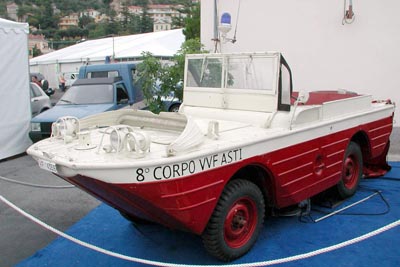 The years since World War II are only a drop in the bucket for the city of Asti in northwestern Italy, whose recorded history goes back before 174 BC, when the area was captured by the Romans from Celtic tribes (Wikipedia). Their Vigili Volontari del Fuoco ("volunteer fire department") was happy to have this Ford GPA for use in the Tanaro River which flows through the city.

Postwar conversions of surplus jeeps into fire engines were less common in North America, where new CJ-2As were more available, than in Europe. 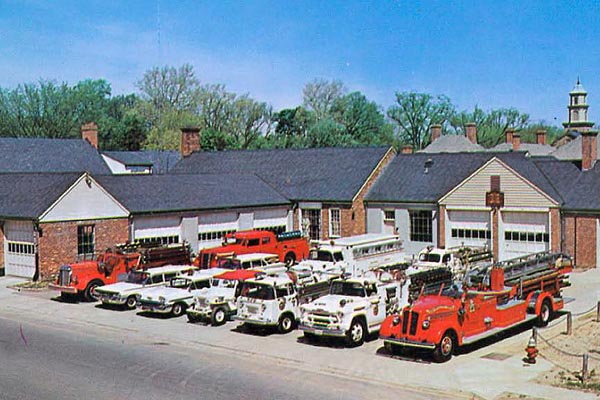 This postcard from the collection of Gary Urbanowicz shows the Williamsburg, Virginia FD. Gary puts the date at probably the early 1960s.

Apparently the department had switched to a white livery for its new apparatus, but hadn't repainted the older trucks -- with the exception of their little jeep which looks like a surplus Willys MB. It still has red canvas which makes it look very sharp. Beside it in the front row is a Jeep Forward Control which is probably one of the newest vehicles in the photo. 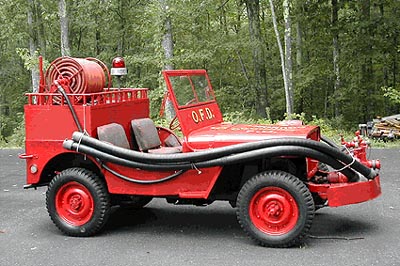 This 1945 MB, sold in 2004 by Army Jeep Parts, was used in Ogunquit, Maine. Plumbing from the water tank to the front-mounted pump and back to the booster reel, runs outside on both sides of the jeep, where the suction hose is also jury-rigged. See a front view (40K JPEG.)

A shot of the L-head engine (80K JPEG) also gives a good look at the siren installed on the left side of the jeep (60K JPEG). An interior photo (80K JPEG) reveals that just about everything, including the steering wheel, got painted when the jeep was sprayed red. A rear view (60K JPEG) shows a nice job of lettering the name of the town, which is on the southern coast of Maine. 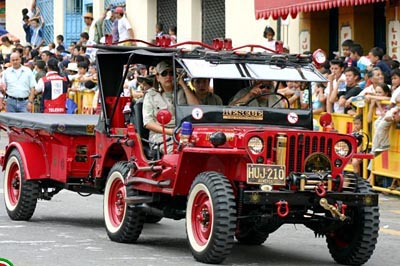 This jeep was never likely in service, but was dreamed up for the Yipao parade in Calarcá, Colombia. The photo was taken in 2006, and a 2005 photo shows the same Jeep from the left side (200K JPEG). See also more photos from the Yipao Festival in Calarcá on CJ3B.info. 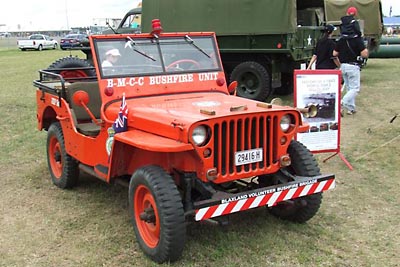 Wayne Ellard photographed this Willys MB on display in Australia in 2006. It had been used briefly by the Blaxland Volunteer Bushfire Brigade in New South Wales. See more details in Willys Fire Trucks in Australia.

Also in Australia, an early apparatus photo (50K JPEG) of the Sutherland Rural Fire Service shows a jeep among their military surplus equipment (photo courtesy of the Headquarters/Heathcote Brigade.)

Last updated 8 May 2020 by Derek Redmond redmond@cj3b.info
https://cj3b.info/Fire/FireMB.html
All content not credited and previously copyright, is copyright Derek Redmond