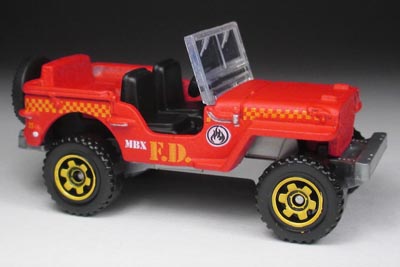 Matchbox released a "MBX FD" version of its '43 Willys in 2013. It's labelled as 1/52 scale. Part of an Outdoor 5-pack (50K JPEG), it has no specific fire Jeep features, and suffers from the lack of paint on the clear plastic windshield casting. (Photo by mbx64 at Swifty's Garage.) 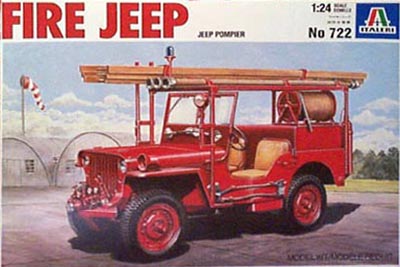 This 1:24 Fire Jeep by Italeri (#722) is a late-1970's Italian-made kit depicting a European fire jeep conversion. The instructions state: "In the Forties and Fifties a large number of US Army Willys Jeeps remained in Europe. These were the basis of fire fighting and rescue vehicles which are all individually equipped units. The Willys Jeep was used as the basis because it had the sturdiest and simplest four-wheel-drive vehicle design of its time." 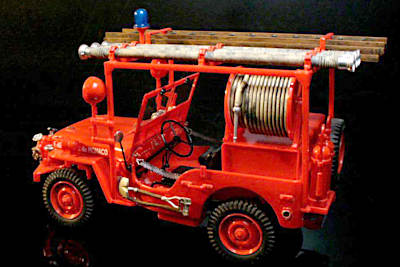 Here's the kit as built by Mauricio Alvarez. See also a front view (80K JPEG) and in Jeep Art From Flores see Roberto's illustration of himself building this kit.

Paul Seabury notes that the kit comes with decals for fire departments in Switzerland, France and Monaco. 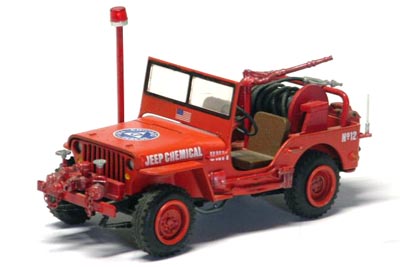 Gary Urbanowicz spotted this unique model for sale on eBay in early 2008. It's a customized 1/25-scale MPC model kit with scratchbuilt parts added, including hose, nozzle and deck gun. It's apparently based on a unit used at the Chicago municipal airport in the 1950s, and has a "Chicago Fire and Rescue" Civil Defense logo on the hood. The top view (50K JPEG) shows the identifier "Jeep Chemical Unit No. 12" on the side, although the model has a front-mount water pump rather than a dry chemical cylinder.

See also a view with the hood up (50K JPEG). Anybody know who built this model? 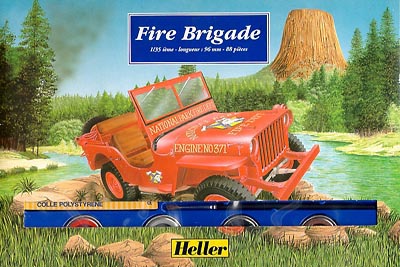 This 1/35 kit from Heller has a colorful but unlikely "National Park Fire Dept." livery, and a nice illustration on the box. Jarek Skonieczny passed along this information: "Based on Heller's Jeep and Trailer kit #791, the jeep is molded in red and comes with paint, glue and a brush. Since the original kit included soldiers, one of the sprues in this fire kit comes with arms and legs mixed in with the jeep parts." 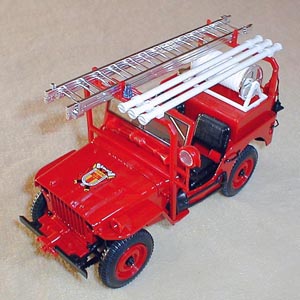 This 1942 Willys MB fire truck is a 1/18 model released in 2000 by the French toy firm Solido. A specific prototype is not identified, but fire service conversions of the MB were common in Europe after World War II. See also a rear view photo (70K JPEG). Thanks to J-L Martin for the photos. 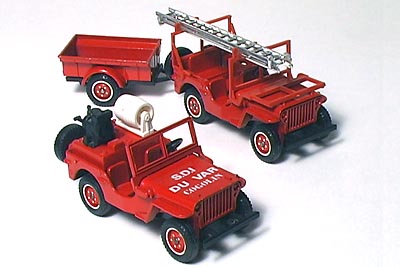 These 1/43 scale (Dinky Toys size) diecast MB's were part of an earlier series of fire apparatus by Solido. The model marked "S.D.I. DU VAR Cogolin" (Service Des Incendies) has a plastic hose reel and gasoline-powered pump mounted above a water tank in the rear. It carries the number 1322 and the date 07/82 on the bottom.

The MB with ladder and Bantam trailer, is based on a slightly less-sharp version of the same casting, but with a rear seat, and plastic windshield and ladder frame added. The number 1322 has been removed from the frame.

A third variation of Solido No. 1322 was a plain MB with no extra equipment (50K JPEG). 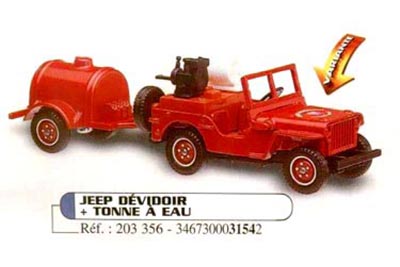 In 2001, Solido re-released the casting (30K JPEG) with the rear-mounted pump, and included a water trailer.

Parent company Verem's 2001 catalogue had similar Willys fire jeeps, including a new release with a boat trailer. Their Kaiser 6x6 tanker is a unique diecast model.

Thanks to Pete, Jarek and J-C Guerry for the photos. -- Derek Redmond