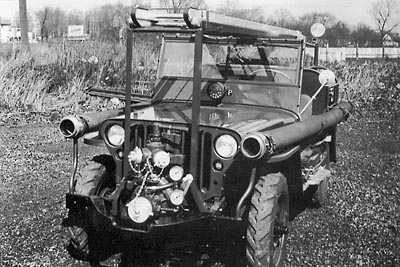 Some 35 or more CJ-2 pilot and preproduction models were produced by Willys-Overland in the last couple of years of World War II, in anticipation of a post-war civilian market for Jeeps. Also known as "Agrijeeps" (a name coined by Willys for the original CJ-1 in 1944,) many of the CJ-2's were sent out for testing as farm vehicles. Apparently at least one of the second series, built in early 1945, was sent to American Marsh Pumps in Battle Creek, Michigan, for conversion as a fire engine.

The Willys-Overland Engineering Dept. captions found on the larger copies of each of these photos indicate they were taken on 26 February 1945, as part of Research Test (RT) 214, which apparently studied the conversion of the CJ-2 for several different industrial purposes. 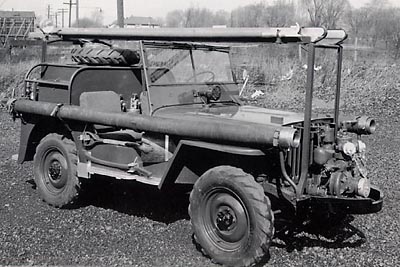 The CJ-2 is immediately distinguishable from the military Willys MB by the raised bronze "JEEP" plaques on the side of the hood and bottom of the windshield (just behind the siren). Another distinctive feature found on the Agrijeep is the spare tire mounted on the passenger side between the door and rear fender, but on this version the spare has been moved above the rear hose bed. Most later fire Jeeps equipped with hard suction carried it on the overhead ladder rack, although Howe Fire Apparatus built some CJ-2As with no ladder rack, and side-mounted hose.

The strainer for the suction hose is stowed between the seats, along with a couple of carbon tetrachloride extinguishers. An additional shovel and axe are mounted on the passenger side of the body. 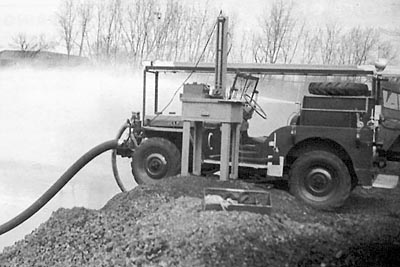 The suction hose was placed in a small body of water for this test of the front-mounted Barton U-40 pump. Apparently the test was a success, because the same model pump was the basis of the later factory CJ-2A Fire Fighter Jeep. The shovel from the driver's side can be seen on the ground just beside the Jeep; it may have been used to help level the Jeep and the table holding the test equipment. 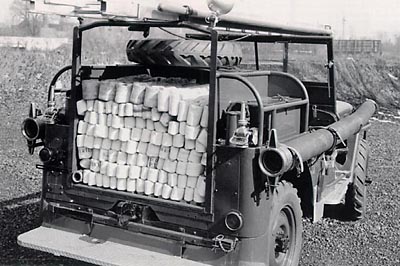 A pike pole and two spotlights are mounted on the ladder rack, and other equipment visible in the rear photo includes a prybar below the pintle hook, two hand lanterns, and two hose nozzles along with a full load of hose. A full-width rear step has been added, with a skirt to protect it from spray by the rear wheels.

The absence of a water tank or booster hose reel on this first civilian fire Jeep apparently set the pattern for most early fire Jeep conversions. Water and hose reel, if required, would be pulled on a trailer.

Thanks to the late Rodger Birchfield for photos from his article "Jeep Fire Apparatus" in issue 2000-2 of Enjine Enjine, the magazine of the Society for the Preservation and Appreciation of Antique Motor Fire Apparatus in America.

Thanks also to Fred Coldwell for photos reproduced by permission from his book Preproduction Civilian Jeeps: 1944-45 Models CJ-1 and CJ-2, and to Todd Paisley. -- Derek Redmond

For more on the CJ-2 Agri-Jeep, see the Pictorial History of the Universal Jeep.