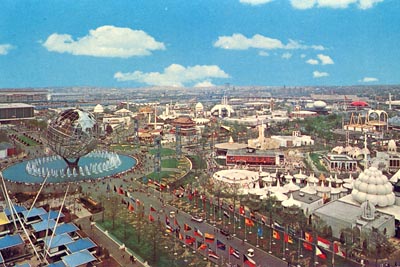 The 1964-65 New York World's Fair is one of those events, along with the assassination of John Kennedy or even the arrival of the Beatles, which seemed to mark the end of a period of innocence and isolation for North America. Held in Flushing Meadows (near Shea Stadium, where the Beatles played in 1965,) the World's Fair celebrated "The Space Age" and was symbolized by the Unisphere which still stands in a park at the site.

This 646-acre exposition, where 250,000 visitors arrived daily to marvel at the potential of technology, was protected from fire by the vehicle which Willys Motors had been promoting since 1956 as the future of 4-wheel-drive technology. Ironically, Kaiser Jeep was about to finally drop the Forward Control truck from its lineup, just as three customized FC's were providing state-of-the-art fire protection for the World's Fair Fire Department (operated by Pinkerton National Detective Agency.) 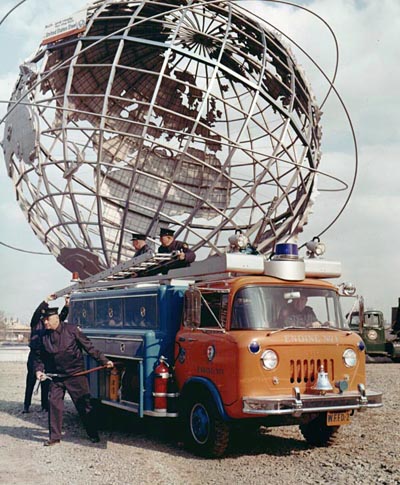 An article from Fair News of January 21, 1963 (re-published in Fire/Police Departments at Bill Young's New York World's Fair 1964/1965 website) announced that "The first of three fire engines, ordered by the New York 1964-1965 World's Fair Fire Department, has been delivered to the Flushing Meadow Park site of the international exposition. The engine, decorated in the familiar orange and blue of the Fair and the City of New York, has the most modern equipment available, including more than 600 feet of nylon, self-drying hose."

Billy Goldfeder, Fire Chief in Mason, Ohio says, "The truck body was built by a company in New Jersey called H & H Apparatus. The World's Fair Fire Dept. was largely staffed by retired and off-duty New York City firefighters. It was essentially a 'fire brigade' that responded initially while FDNY was on the way."

The photo at left confirms the orange and blue paint scheme on Engine 1, a 1962 FC-170DRW. A close look (100K JPEG) confirms that most of the crew members could indeed have been retirees. The photo is courtesy Pinkerton (now Securitas). 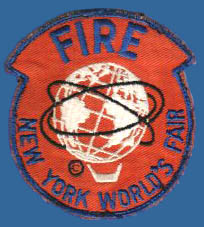 According to the book Badges of the Bravest, a history of FDNY by Gary Urbanowicz, three pumpers and one rescue truck were specially designed by former FDNY Assistant Chief Thomas P. O'Brien who commanded the small department. "They were built on 1962 Willys chassis (original makers of the world famous 'Jeeps') and were equipped with a 500 gallon-per-minute pump, nearly 2,000 feet of hose, ladders and an assortment of fire fighting and rescue tools.

"In addition, the WFFD provided a chauffeur for each of the four ambulances of the World's Fair Medical Department. A far cry from today's modern ambulances, these were little more than station wagon cars equipped with a stretcher, red light and siren. Built by Oldsmobile, they were donated to the Fair by General Motors."

(The full World's Fair Fire Department chapter from Badges of the Bravest is available on the web, and the book is available through FSP Books and Videos.) 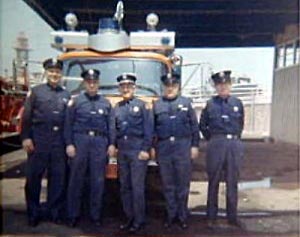 The truck behind some company members in this photo provided by Greg Gottlieb is similar to Engine 1; the only obvious difference is that the small blue lights were located on the ladder rack on the roof, rather than on the front grille. Another photo from the same angle reveals the licence plate "WFFD 3" which suggests this is Engine 2.

The officer and four firefighters seen here may have been the standard size of crew for the trucks, since the Fair News article states that the Department "will be divided into three companies, each consisting of a captain, three lieutenants and 20 firemen. They will operate on a round-the-clock basis to protect the buildings on the Fairgrounds and will stand ready to assist the New York City Fire Departments in fighting fires in the vicinity of the Flushing Meadow Park site of the Fair." 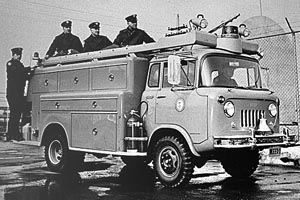 This archival photo appears to be Engine 1 again; it carries the same "WFFD 2" licence plate, but the "Engine No. 1" on cab and doors seems to have been airbrushed out of the photo. The photo clearly shows the small turret gun on the roof, and the dual rear wheels. The heavy duty FC-170DRW had a Dana-Spicer 70 rear axle and was rated for a gross vehicle weight of up to 9000 pounds, so it could carry plenty of equipment plus the 250-gallon tank of the World's Fair engines. 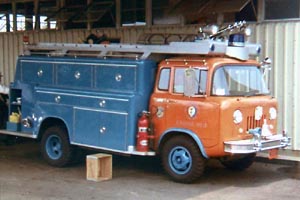 Jack Calderone, editor of Fire Apparatus Journal, provides this photo by Leo E. Duliba, of Engine 3. It appears to be similar to the other two, but with slightly different front-end details and the "WFFD4" licence plate.

Jack says, "The engines were supposed to go to FDNY following the fair's closure but didn't. If anyone has any info as to where they went please forward it to me." Jack has also clarified that the 1964 Howe Apparatus FC used by Edgewater Park Volunteer Hose Co. 1 in the Bronx until 2003, was in fact purchased new by Edgewater, rather than as surplus from the World's Fair as some people have speculated.