Jeeps have often been modified as fire apparatus by individual fire departments; frequently the work is done by firefighters on a volunteer basis. This produces a vehicle that suits the department's particular needs, and usually on a low budget. Some CJ-2As (1946-49) converted in this way can still be seen in museums or fire department collections. 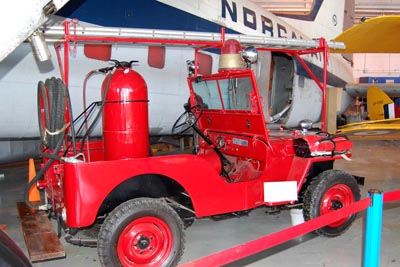 This CJ-2A was converted as a crash truck for the airport at Dafoe, Saskatchewan in 1946/47. Later used at Yorkton and at St. Andrews Airport near Winnipeg, it was donated to the Royal Aviation Museum of Western Canada in Winnipeg in 1990. Photo by AdolfGalland on Flickr, under CC. 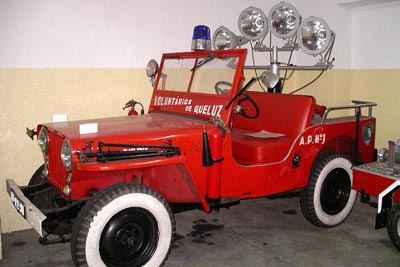 Here's another unusual conversion, in Queluz, Portugal, a small city on the outskirts of Lisbon. The Jeep is equipped as an auxiliary lighting unit, with a generator in the back to power the lights. José Lucena sent this photo, and says "It's the only one of its kind in Portugal, to my knowledge. The original vehicle was built in1946 and was put in service by the Fire Dept, after an in-house fullconversion, in 1956. 'A.P. No.1' stands for Auto Projectores (meaning Floodlight Vehicle) No.1. On the front fender there is a collapsible tripod for placing an extra searchlight on the ground. Cable reels (130K JPEG) were carried in the open rear box. Two CO2 fire extinguishers were also carried."

This 1947 Jeep CJ-2A was previously in service with the Day Heights, Ohio FD, who added the booster tank and used it as a grass fire rig. This department no longer exists, and the Jeep is now owned by the Cincinnati Fire Museum. (Photo by Steve Hagy.)

This CJ-2A, now retired by the Boles Fire Protection District in Franklin County, Missouri, was equipped by the department for brush fire use.