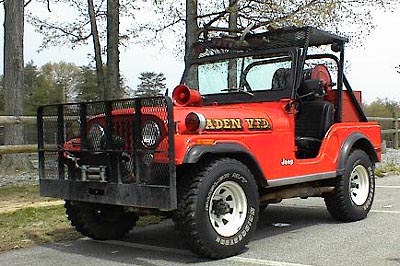 Baden VFD is now part of the Prince George's County Fire Department, and we're sad to hear that PGFD reports the Jeep was severely damaged on 12 November 2008 (see below). Thanks to Robert Francis for letting us know. 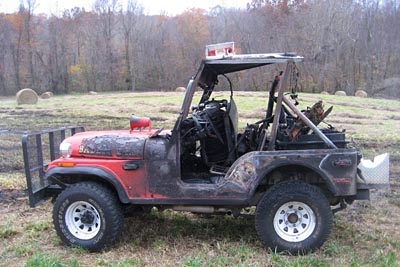 "A hay baler had accidentally ignited dry hay and the fire started to quickly spread. As the brush unit approached the scene, smoke from the fire was lying close to the ground. The smoke obscured the view of the driver and a large rolled bale of hay was in the path of the unit. The brush unit, with two seat-belted firefighters on-board, struck the bale and rolled onto its side directly into the seat of the field fire.

"The vehicle quickly was overcome by the fire, however both firefighters escaped unharmed. The vehicle is considered a total loss."

Factory-built fire Jeeps were given their own series of serial numbers starting in 1955, when both a CJ-3B Fire Engine and a CJ-5 Fire Engine (see an advertising brochure, 50K GIF) were offered by Willys, as well as a 4WD Jeep 6-226 truck (see Willys-Overland Production Figures for details). 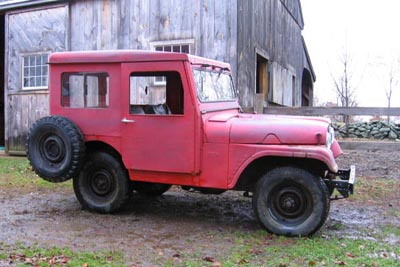 Tremaine Cooper reported that "I just brought home what I was told was a '57 CJ-5. The serial number is 5704802 10001. The prefix is for a factory fire Jeep (see Willys-Overland Production Figures 1945-1961) so it appears to be the first CJ-5 fire Jeep, made in '55. There are a couple odd holes left, but no obvious fire apparatus on it. Much of the chassis is still painted red. I would love to hear any other info if anyone has any." 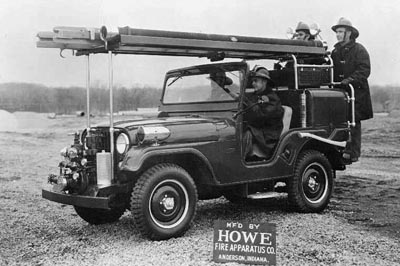 This is the only factory photo I have seen of a CJ-5 Jeep Fire Engine. Like many factory Jeep fire engines, it was assembled by Howe Fire Apparatus of Anderson, Indiana. 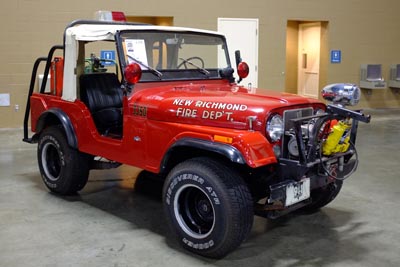 Most fire service CJ-5s were converted or adapted by local fire departments. Brush 36 of New Richmond Fire & EMS in Ohio was simply given a 50-gallon tank and portable pump. The 1983 CJ-5 was still in occasional brushfire service when it was photographed by Bob Christy on display at Toledo Jeepfest in 2016. 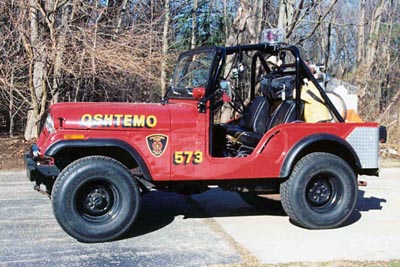 This photo of a 1979 CJ-5 used by the Oshtemo Township Fire Department in Michigan, was sent by Jim Fairweather. The Jeep, on loan from the Department of Natural Resources, carried 80 gallons of water. As of 2015 it has been replaced by a Rubicon. 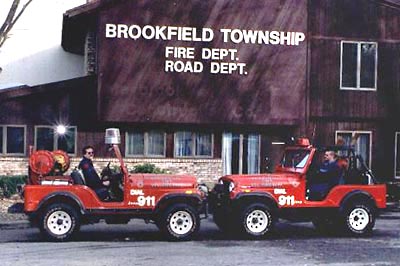 A recent article in Jp magazine suggests that over 3,000 Jeeps are still in service with fire departments in the United States, and here's another department in Ohio that is doing their share to keep that statistic valid. Brookfield Fire Department has had 4x4 grassfire capability since buying a surplus Army truck in 1949, and as of 2018 they still listed two 1977 CJ-5s, Units 18 and 181, on their roster.

Recently refurbished by East Brandywine Fire Company in Pennsylvania, Brush 49 is a 70's-vintage CJ-5 with a 70-gallon tank and a 90 GPM pump. It also carries other goodies, including a chain saw on the front bumper (60K JPEG). East Brandywine is a mutual aid company with Modena FC and West Bradford FC, who both run CJ-7 brush units. 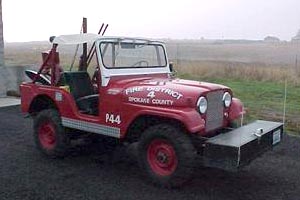 Jim Fairweather spotted an interesting pair of CJ-5 "Fire Plows" on the website of Spokane County (WA) Fire District 4. Jim says, "Plow 44 is an early 5. Plow 41 (20K JPEG) looks like a '72 or later. Unknown if they use purpose-built fireline plows, or Monroe 3-pt. hitch and an agricultural plow. They look to be a disk-type plow." The front toolboxes on the Jeeps appear to be serving as both counterweights and equipment storage. 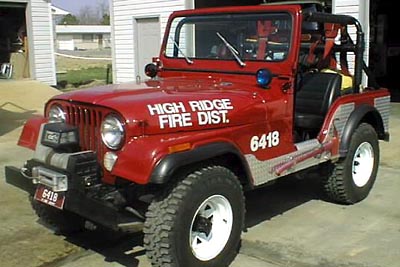 Unit 6418 of the High Ridge Fire Department in Missouri is a 1973 CJ-5 used on brush fires that are inaccessible by other means. In addition to the front winch and the pick head axe mounted on the side, equipment carried includes bolt cutters, hydrant tool, spotlight, leaf blower, backpack-style water tank with sprayer, chainsaw, extra fuel, 55-gallon water tank, 150 feet of 3/4-inch hose, 50 feet of 1-1/2 inch hose, and a rake. 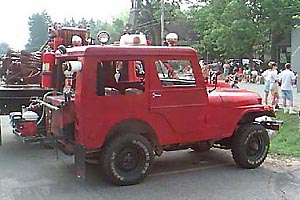 Reiffton Fire Company has been in operation since 1913 in Exeter Township, fifty miles northwest of Philadelphia, Pennsylvania. Their Brush 2 is a 1974 CJ-5 equipped with an 80-gallon tank, chain saw, and 8000-lb. winch. 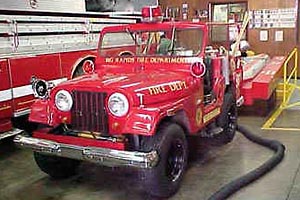 Big Rapids, Michigan, Department of Public Safety Fire Division runs a 1968 CJ-5 as Grass Rig 1-9. The Jeep was surplus from the U.S. Forestry Service, and was rebuilt by the fire fighters. It's primarily used for grass fires, but also allows access to locations other apparatus can't reach, and can tow the Division's inflatable water and ice rescue boat (40K JPEG).