This conversion of a CJ-3B was done in Italy in 1970, so I immediately assumed it was probably a VIASA Jeep built in Spain, where 3B's were produced through the 1970's and often imported into Italy. But David Zidaric (of the Jeep VIASA CJ3B Homepage) and Paolo Armando Legori both pointed out that the rear hubs seen here indicate a semi-floating rear axle as used by Willys, rather than the full-floating axle found on all the Spanish CJ-3Bs (see for example a VIASA Brushfire Jeep in the Alps.)

Willys did build the CJ-3B in the US in small numbers through 1968, although our records of Surviving CJ-3B Jeeps suggest most if not all of them after 1964 were sent as military aid to Latin America. David speculates that this Jeep in Italy may have been built earlier in the 1960s, and been military surplus when it was purchased and modified in 1970.

Thanks to the Fiamme Blu photo collecting and modelling website in Italy, for these photos taken by Ambu. 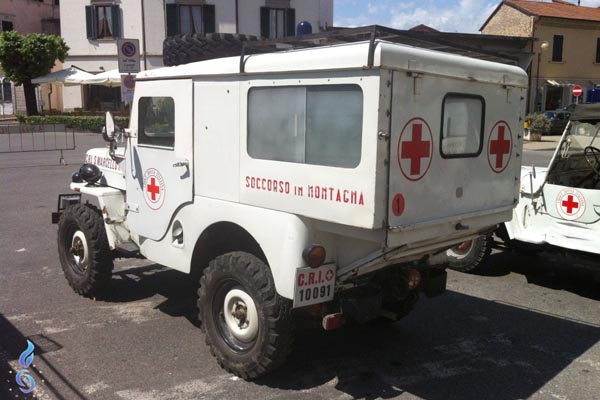 The Croce Rossa Italiana (CRI) is the Italian Red Cross, and the CRI of San Marcello Pistoiese operated this CJ-3B ambulance conversion to provide Soccorsi in Montagna ("mountain rescue") in the Pistoia Mountains of northeastern Italy.

The Jeep with its extended hardtop was converted by Sirecome (Società Italiana Recupero e Commercio Metalli/Macchinari), a firm located about 100 miles away in La Spezia, and purchased by the CRI in 1970. 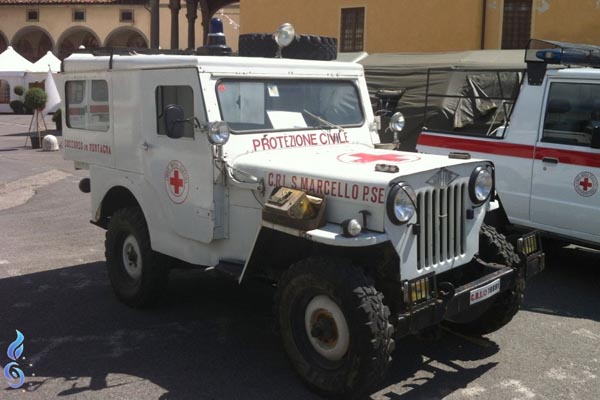 Ambulance and fire protection in the mountains around San Marcello is part of Protezione Civile ("civil defense").

The lack of a WILLYS stamping on the hood or front grille indicates a post-1962 CJ-3B. Sirecome took the opportunity to put their logo on the radiator guard.

David says, "Sirecome was a little workshop in La Spezia, which converted US Army and Navy surplus Jeeps and sold them to private citizens or public institutions. Normally they installed an Indenoor (Peugeot) diesel engine in substitution of the original petrol powered unit." (See Jeeps in Italy on CJ3B.info for details on their S 38 conversion of the M38A1.)

Paolo provided details of the Peugeot Indenoor XDP4/88 engine which may also be installed in this CJ-3B: "The displacement was about 1998cc. 88 means cylinder bore. Conversion kits, flywheel, starter motor on engine right side, flywheel bellhousing and other minor parts were supplied by Matra (not affiliated with French Matra) from Cologno Monzese (Milano). This firm is also closed." 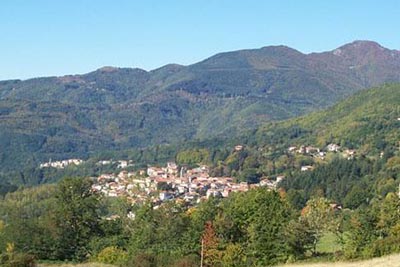 The San Marcello Pistoiese area is the home of the famous Pistoia Mountains Astronomical Observatory. Thanks to Agriturismo.it for this photo of the town. 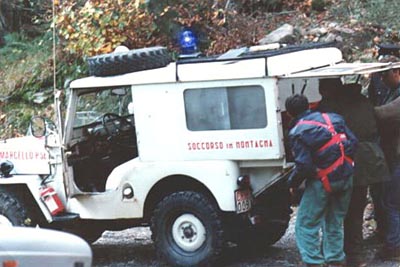 A photo of the ambulance in action is courtesy of Protezione Civile alla CRI di San Marcello, a volunteer organization whose history goes back to World War II. During the postwar decades it has provided relief during a number of flood disasters in the region. 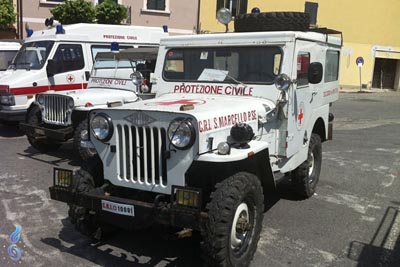 Sirecome built the extended hardtop to accommodate a stretcher, and took advantage of the space up top to install an equipment rack, spotlight, blue beacon light, and the spare tire. The headlight guards may also have been installed by Sirecome.

This photo by Ambu from Fiamme Blu also shows that the 3B was not the first Jeep used by the CRI of San Marcello.

Thanks to David Zidaric and Paolo Armando Legori for details on Sirecome. Thanks to Federico Cavedo for spotting the photos at Fiamme Blu. -- Derek Redmond

Return to Jeeps in Italy.