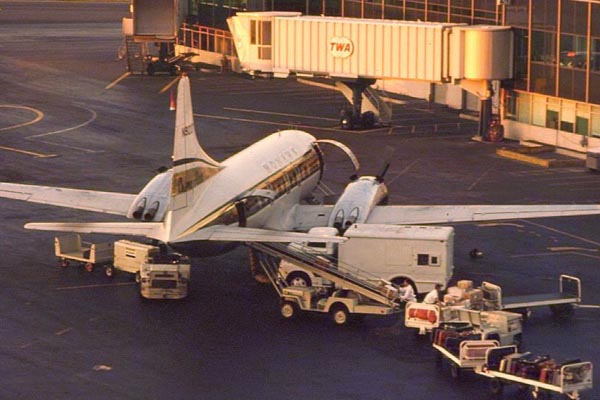 When airplanes paused for servicing at airports during the "golden age of air travel" in the 1960s, there were likely to be Universal Jeeps at work. One of the jobs they frequently handled was carrying and powering the conveyor belts for lifting luggage and supplies onto the aircraft.

See the larger version (80K JPEG) of this beautiful late afternoon shot of the ground crew using a CJ-3B to load freight onto a Mohawk Airlines Convair CV-240 at LaGuardia Airport in New York, taken in August 1966 by John F. Ciesla. 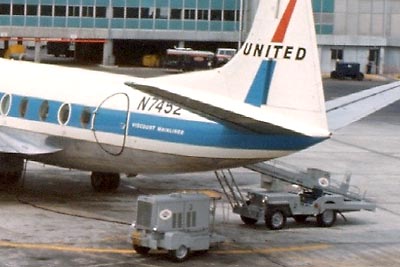 A conveyor belt CJ-3B appears with a United Airlines Vickers Viscount in Atlanta in this May 1966 photo from John F. Ciesla. See the full version (70K JPEG).This Jeep has its door openings intact, while the 3B in the above photo had its body sides cut down to the floor for easier access.

One more CJ-3B is seen in the background of a photo of a Lanica DC-6 at Miami International (90K JPEG) photographed by John P. Stewart in June 1966. 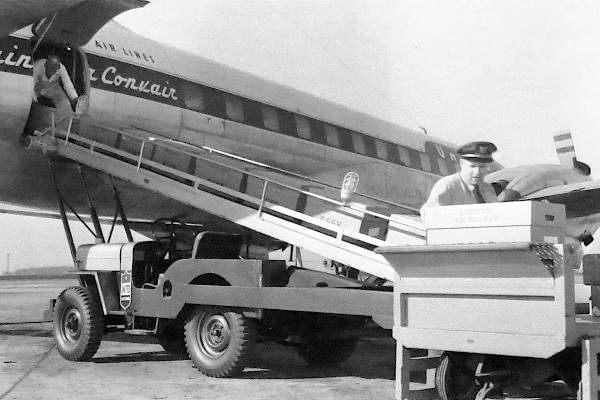 A clever Willys advertising photo shows a delicate cargo of eggs being loaded into a United Airlines Convair by a CJ-3B with a Hogan Conveyor or "Hoveyor", probably at Toledo Airport circa 1954.

But the Hoveyor could also be tough when it was needed. See Jeep Helps Out at Airport Fire in 1958. 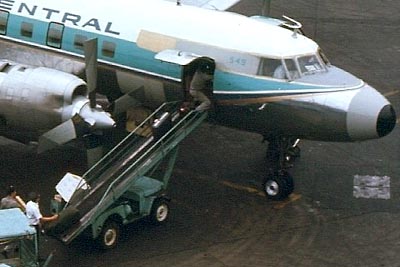 The other Jeep most commonly seen in airport photos from the period is the DJ-3A Dispatcher, which after 1957 was built by Willys with low door openings. John F. Ciesla photographed this action at Chicago's O'Hare International in June 1967. See also another view (70K JPEG) with the Jeep moved to the rear door of the North Central Airlines Convair CV-580.

Another DJ with the low doors is seen pulling baggage carts to a Continental Airlines Viscount at Love Field in Dallas (50K JPEG) in a 1962 photo by Mel Lawrence. 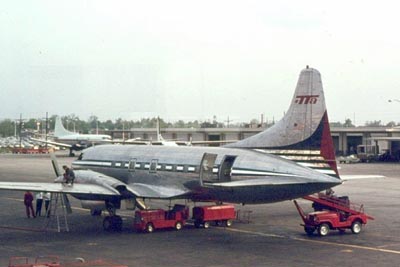 By 1968, newfangled Jeeps like the DJ-5 were converted as conveyors, as seen in this photo of a Trans Texas Airlines Convair CV-600 in New Orleans, by John F. Ciesla.

As far as I know, all these loaders were built at the Phelps Manufacturing plant in South Bend, Indiana, and known as the "Hoveyor". See Building Conveyor Belt CJ-3Bs for more details and photos. 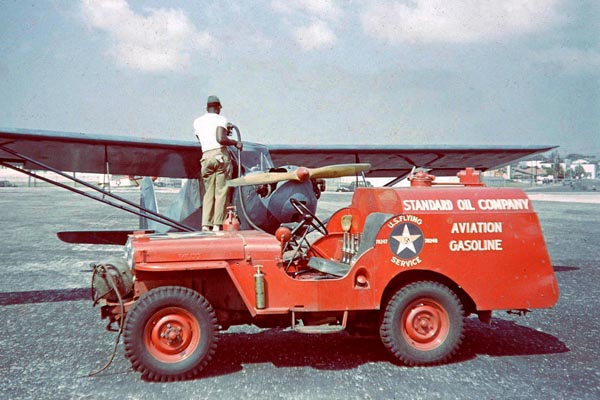 A quarter-ton Universal Jeep could be turned into a gasoline tanker at a smaller airfield. This looks like a CJ-2A, owned by US Flying Service, a flight school in St. Petersburg, Florida. This mobile gas station also has a compressed air tank on the front bumper, and bottles of oil in the cab. The little carbon tet fire extinguisher doesn't inspire much confidence, but there seems to also be a larger CO2 extinguisher on the far side. 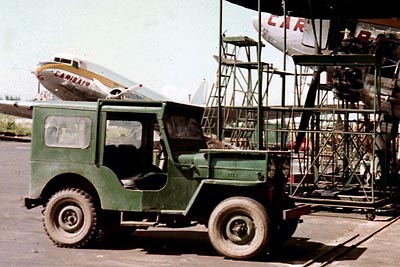 A Jeep hardtop could serve as a handy platform for maintenance work, as seen here in San Juan, Puerto Rico in 1965, with a Caribair DC-3 in the background. Photographer Billy Sierra recalls, "I was a very young teenager when I first drove that Jeep that is pictured. It shook and vibrated like a tambourine. I don't think you could go faster than 50 MPH as you felt it coming apart. There is also a steel platform on the hood of the Jeep that the mechanics used to work on the airplanes." 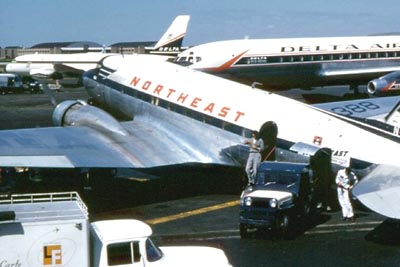 The mixture of jets and propeller aircraft on the tarmac at major airports is one of the things that made the 1960s an exciting period in air travel. This 1960 photo by John F. Ciesla shows a classic DC-3 at Idlewild (JFK) Airport in New York, with a couple of brand new Delta jets in the background. Somebody in the ground crew rides in a classic too. I thought it might be the mechanics' Jeep, but Karl Russell, whose father flew DC-3's for Northeast, comments, "I'd be willing to bet that CJ-3B is for handling baggage since it is backed up to the baggage compartment. While the guys in coveralls could certainly be mechanics, I know for a fact the ramp crew gets very testy if a mechanic parks in their way." See the full version of the photo (60K JPEG). 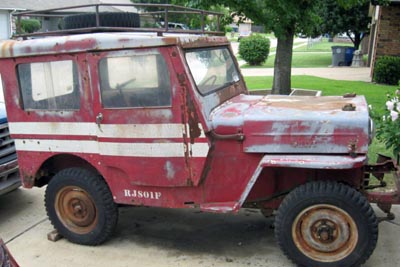 This 1956 CJ-3B was originally used by by Trans World Airlines to pull baggage at the Tulsa Municipal Airport. It was moved to the Tulsa International Airport in 1961 where it was in service until 1979. When sold online in 2016 it still had its original red paint with "TWA" showing on the hood. 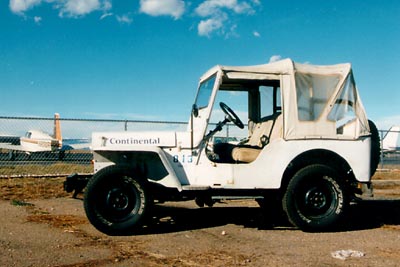 This 1960 DJ-3A was used for the pulling luggage wagons as recently as 1990 by Continental Airlines in Denver. Owned by Steve Mehls, the Dispatcher has now been repainted in its original Continental red and white (35K JPEG) which had been covered up by later re-paints as the Continental colors changed. 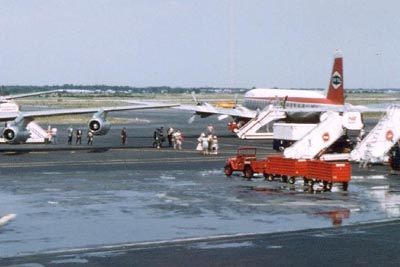 Another shot with propellers and jets side-by-side is John F. Ciesla's nice photo of a Braniff luggage train pulled by a Dispatcher, waiting for the passengers to disembark from a Boeing 707-227 at Idlewild in July 1960, with a Capital Airlines DC-6B in the background. 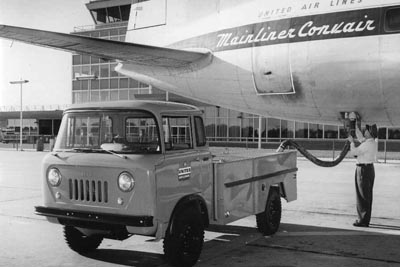 Once the Forward Control trucks were introduced, Willys Motors did promote them as airport service vehicles, including the always important lavatory truck. Willys apparently had a good relationship with United Airlines, because many of the advertising photos taken at the Toledo Airport featured United's Convair Mainliner fleet. 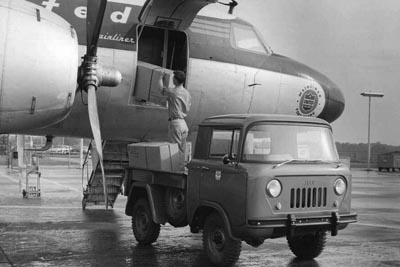 Convair CV-340-31 "Fort Wayne" was in service with United from 1953-1960 according to a fleet list, so that places this photo of an FC-150 prior to 1960. Another interesting detail in this photo is the emblem on the door of the Jeep, which is not the United Airlines shield, but rather a US foreign aid sticker (110K PNG), placed on vehicles destined for export as government aid. 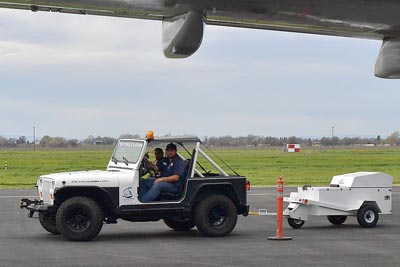 Willys Jeeps at airfields in North America have likely all retired long ago, but you will still see more recent Jeeps at work, and here's an interesting one in Sacramento CA. In addition to hitches front and rear, this YJ is sporting aftermarket fenders, rocker panel armor and front bumper from MetalCloak, in nearby Rancho Cordova CA. Great way to keep a working Jeep looking good, even after a couple of decades of service. 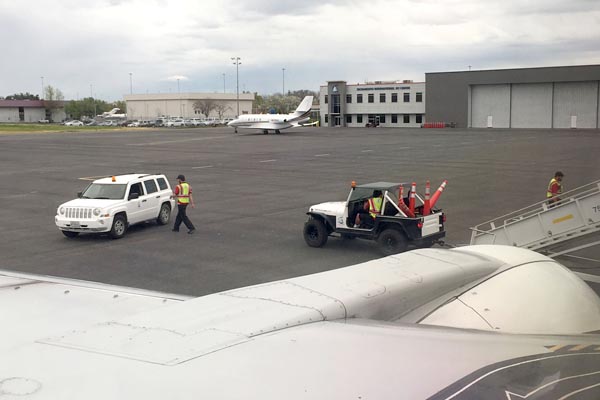 Bob Christy took these photos in early 2017 when he was taking a charter flight through the Jet Center private terminal at Sacramento International, and said, "I was pleased to find this Wrangler serving airport duty, moving steps, hauling baggage carts and such around the jet port."

See more Airport Jeeps Around the World and the Willys publication Jeeps for Aircraft Ground Support.