Here's a good look at a special-purpose modification of a CJ-3B Universal Jeep. This picture from the Images in Time collection at the Toledo Lucas County Public Library looks like it was taken at the same time as photos seen at the bottom of the CJ-3Bs at the Port of Toledo page, showing conveyor belt-equipped CJ-3Bs being loaded onto a freighter.

These conveyor Jeeps were typically used for loading baggage at aiports (see Airport Ground Service Jeeps.) There were varying designs, but the most common had the large rear supporting platform seen here.

The Hogan Conveyor or "Hoveyor" was built at the Phelps Manufacturing Company plant in South Bend, Indiana. Bernard Schaaf sent CJ3B.info his recollections of working there during the summers of 1956 and 1957:

"Once or twice a week, one of the employees would take the early morning bus over to Toledo and pick up two new CJ-3Bs from the Butler lot, right across the street from the Willys plant, hook the two Jeeps back-to-back, and drive them back to the factory at South Bend, where the conversion was done. On several occasions it was I who made the Toledo run. On one occasion we needed some special Willys parts, so I drove one of our CJ-3Bs into the Willys factory, where I was guided to the various locations to pick up the desired special parts.

"Phelps Manufacturing was owned by George O. Phelps and had two factories: one at 1828 South Franklin Street, South Bend, Indiana, which is where I worked, and one at 5951 Sepulveda Boulevard, Van Nuys, California. The South Bend factory was run by Daniel E. Stanley, an engineer, and I was his office clerk. This factory had about 12-15 employees, and turned out 2 or 3 Hoveyors a week. Some of them were scheduled for 'domestic' delivery, i.e.. inside the US, and some were specified 'export.' Each one had been painted by us with the colors of the particular airline.

"Some airlines wanted various extras, such as an engine-hour meter, whereas others did not. I used to make up and send out the invoices to each airline, and the price of a new Hoveyor was usually about $1500-$1600 (there was sales tax on the 'domestics' but no sales tax on the 'exports'). I also made up the weekly payroll and paid all the bills, including the freight bills. Copies of all these items were sent weekly to Phelps's 'main' factory in Van Nuys, to the attention of one Earl O. Fletcher.

"When boss Stanley would drive a finished Hoveyor to the railroad yard to put it on FOB shipment, I would sometimes chase him and bring him back to he factory in one of the CJ-3Bs which was awaiting conversion.

"Phelps bought its CJ-3Bs without a passenger seat. Our factory did cut down the dashboard and rear end; we also built the power takeoff and the hydraulically-operated power-takeoff conveyor belt from scratch. The Hoveyor could be stopped, started, or reversed, by a lever at either end, i.e. either by the workman on the ground or by the workman in the cargo hold of the aircraft. And of course we also provided spare parts to those airlines which needed them." 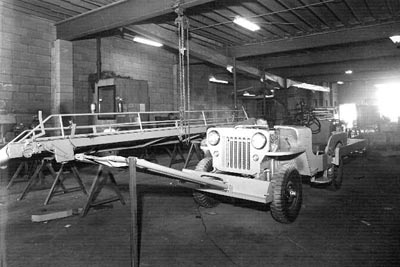 An exceptional picture in the Toledo Library Collection apparently shows the assembly of a Hoveyor at the Phelps plant. The front and rear supports are in place, and in the large copy of the photo (60K JPEG) it appears the cowl is being modified prior to installation of the conveyor. 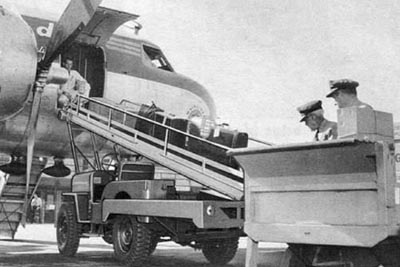 A rear-view photo from the late-1950s Willys booklet Jeep Vehicles in Public Service shows the rear platform wrapping around the side of the Jeep, and enclosing the PTO drive for the conveyor belt. 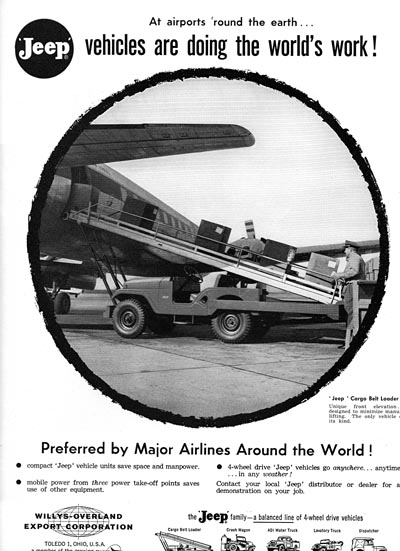 This Willys advertisement circa 1957 promoted the Hoveyor, although not by name, and the photo showed a CJ-5 version. I don't know how Phelps Mfg. decided what Jeep model to bring over from Toledo on a given day -- they used CJ-3Bs, DJ-3As and CJ-5s to build their Hoveyors. Maybe they just took whatever Willys was overstocked with at the time.

Note the ad is from the Willys-Overland Export Corp. The export divison of Willys Motors kept the old W-O name, and their job was to market Jeeps overseas. They were no doubt happy to show off the CJ-5, the most recent Universal Jeep model, although the CJ-3B was probably a bigger part of their export business. 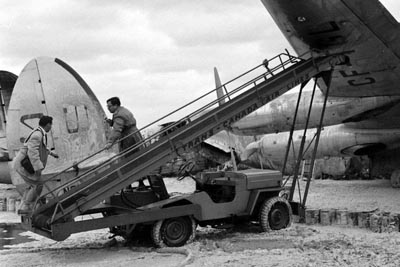 One of the best pictures of a CJ-3B Hoveyor in service is a LIFE magazine photo of a TCA baggage loader helping out after a 1958 Airport Fire at Idlewild in New York. It appears to be supporting a good deal more weight than a normal load of suitcases. 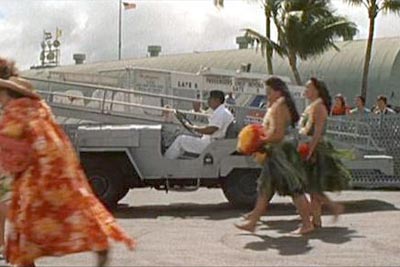 Steve Mehls spotted a glimpse of one of these Jeeps on the tarmac in the Elvis Presley movie Blue Hawaii. This view and the one at the top of this page, make it clear that the hood must have been cut to allow the conveyor to be fully lowered. 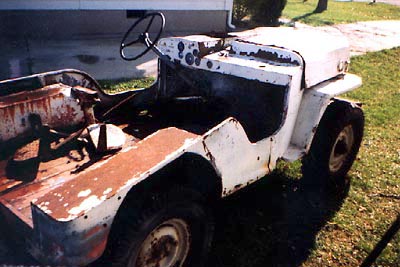 Chuck Watford supplied this photo of a former belt loader which he later restored to stock 3B configuration. The modifications to the cowl and dash are obvious, and there is a channel added in the hood to allow the belt assembly to rest on the dash. 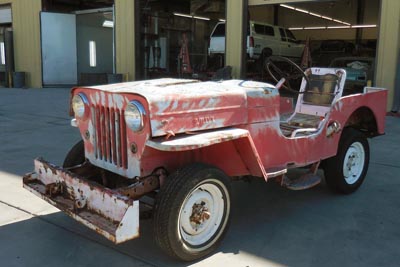 This 1957 CJ-3B Hoveyor was originally owned by TWA in Albuquerque, New Mexico and later used by Texas Air. When it was sold online in 2016 it still had the bumper modified by Phelps Manufacturing to support the conveyor. 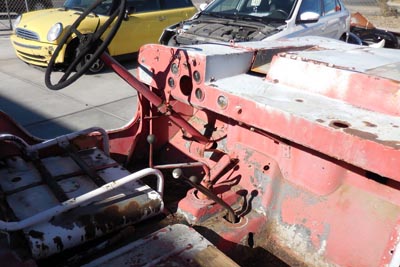 A closer look at the interior of the TWA Jeep reveals the transmission shifter bent into a "Z" shape, presumably to clear the conveyor when it was lowered. The modification to the hood is also clearly visible here. 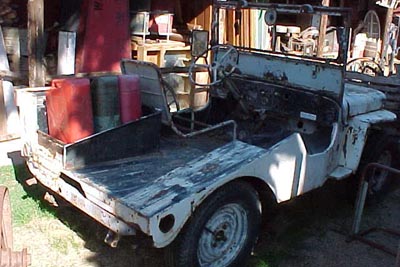 The lower cowl and hood of a DJ-3A didn't require cutting to install a conveyor, and the column shift was probably another advantage. In this photo by Mike Winchester of a DJ-3A formerly used at the Tucson, Arizona airport, a CJ-2A windshield has been added to the surplus Dispatcher. Mike also took a picture of the extra coil overload spring (50K JPEG) added to the right front axle. 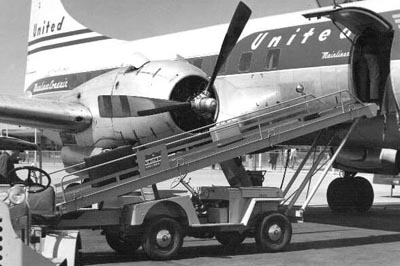 This picture of a DJ-3A baggage loader is one of many Willys promotional photos taken at the Toledo Airport. The DJ here has a different rear platform that doesn't wrap around the rear of the body, and has the door openings cut down to the floor for easier access. Photo courtesy of the Toledo Library Collection.

See more Hoveyors in Airport Ground Service Jeeps and CJ-3Bs at the Port of Toledo.

And a Hoveyor taking on a different job: Jeep Helps Out at Airport Fire in 1958.