Lycoming JB-1 Aircraft Generator:
Is it a CJ-3B?

Jerry O'Neill sent this photo taken in 1954, showing a Jeep modified as an aircraft generator/starting unit. The original photo is black and white (130K JPEG) but I have colorized it here to show what the actual color may have been. 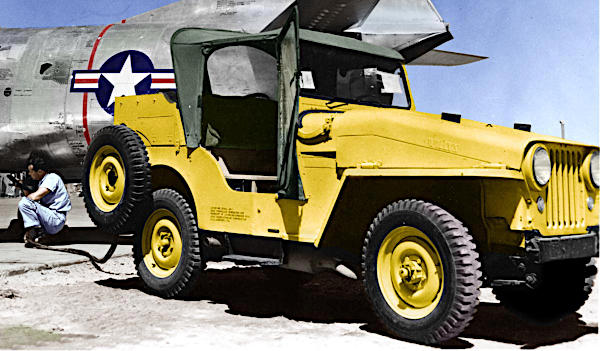 Here's Jerry's description of the photo: "This appears to be a CJ-3B modified by the Lycoming Division of Avco some time around 1954. The photo is stamped from the Lycoming files on the back and dated June 2, 1954. It depicts the right side and front of a CJ-3B with a modified front end, by the tail of an F-86D Sabre. A technician is plugging the Jeep's power cable into the aircraft's belly. The photo is black and white, but the Jeep appears to be all yellow.

"Stenciled on the outside of the passenger side, below the seat is the following: 'Lycoming Model JB-1, Self Propelled Generator Set, Property of Lycoming-Spencer Div., Avco Manufacturing Corporation, Williamsport, Pa.'

"The Jeep has some type of unit mounted in the rear section; no passenger seat, just what appears to be a flat raised board. Here's where it gets good: the muffler comes out behind the right side step like an MB or GPW. The CJ-3B cowl and windshield are there, but it looks as if another CJ-3B cowl section has been added from where the hood would normally hinge, then a CJ-2A hood with the embossed "Willys" has been attached to that, angling down to what appears to be an M38 grill without the headlight brush guards.

"This hood/cowl unit is hinged onto the right fender with two hinges, and is opened by unlatching the left fender holddowns and throwing the hood over from left to right. To fill the angle with the fender, an angled piece has been added to the new hood. Wood windshield blocks are halfway down on the new hood, with a tiedown loop for the windshield. The fenders have been neatly extended forward, and I believe the front axle has been moved forward, but I'm not sure. There is no front bumper. There must be some type of mods under the hood to extend it out so far.""

I told Jerry I thought it looked like the bottom of the windshield frame had been cut, and this Jeep is probably a modified CJ-3A with a raised cowl, rather than a 3B. 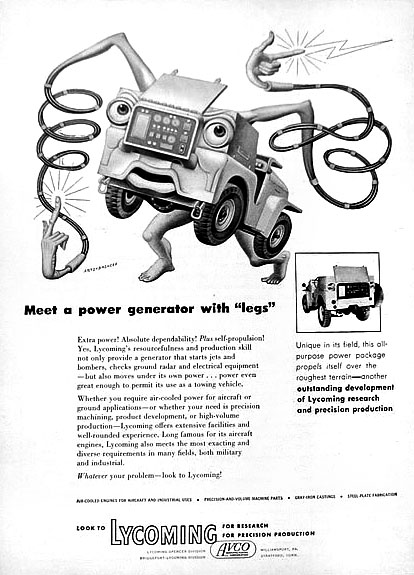 "There was also in the works at that time a 6-cylinder version O-480-G, 200 HP 30V 45KW generator, that was designated LPC-26. I have copies of fliers on both these self-propelled generator sets, including some photos of the engines and the Jeeps taken at the factory.

"There were also some Jeeps that had air cooled opposed 4-cylinder engines with various different fan cooling setups, as well as overhead-valve V4 engines that I believe later became the Wisconsin V4 engine."

Wes K: Actually I believe the only thing Willys had to do with the project is sell Lycoming the CJ-3A. I'm sure Lycoming did its own modification work. Since the F86 has an electric 24-volt starter/generator, the Jeep is supplying at least 400 to 600 amps 28 Volt DC. Lycoming had already supplied converted aircraft horizontal opposed engines for their trailer type generator sets so it makes sense that they would try to offer their product in a self-propelled package. So I'm guessing either a 4 or 6-cylinder Lycoming aircooled aircraft engine driving a very large 28 Volt DC generator or some really inventive drive system using the Willys engine to drive this large generator.

Jerry O'Neill: I'm glad this CJ is of interest to some people. I actually bought the photo on e-Bay in a lot of aircraft photos. The main reason I bought it was because of the Jeep, but the picture on e-Bay was too small to see what the Jeep was. I thought it was just a regular CJ-2A or 3A. When I got the 8x10 in my hands, I knew somebody must know something of this Jeep. If it had an aircraft engine in the front it would have been a 4 or 6 cylinder, horizontally opposed, engine. That would probably not fit into the existing engine compartment. I'm also curious as to what's in the back of the Jeep.

Wes K: Actually a 4 cylinder 135 HP Lycoming flat opposed engine would only weigh 280 pounds and be 30" wide and about 36" long by 25" high. As I mentioned there is also the possibility of an unusual drive or PTO drive system under the hood taking up the extra room and driving a very large (about 16" long by 12" diameter) generator or driving a driveshaft that runs under the raised passenger floor and turning a generator mounted in the box at the rear.

r. Jack: See the book Continental Motors: Its Motors and Its People by William Wagner, 1983. (If you like engines this is a great read.) Lycoming was part of Continental, which became part of Teledyne. I do not see a specific mention of this vehicle. A straight 6 would be logical for the extended front end. Whether Willys 6 or a straight 6 Continental "Red Seal" flat head from the parent. The trailer mounted starter had an aircooled flat opposed engine.

Roger Lion: A Lycoming flat 4 engine might be too wide for the engine bay, and in any case it would have to be mated up to a transmission for ground transport. Could this be a unit patched together from a CJ-3B and CJ-2A grille, or CJ-2A chassis and grille with a CJ-3B tub added, and the frame extended for a longer 6-cylinder engine as others have suggested?

Thanks to Jerry and to everybody else for their comments. -- Derek Redmond


The look of this Jeep made me wonder about whether maybe somebody at Willys-Overland also came up with the idea of a slant-hood Jeep to accomodate the F-head engine. Then a Willys photo from May 1953 turned up, confirming that indeed they had; see Jeep Prototypes Timeline 1948-53. Another Jeep conversion that tried this was the Cournil Jeep Tractor.