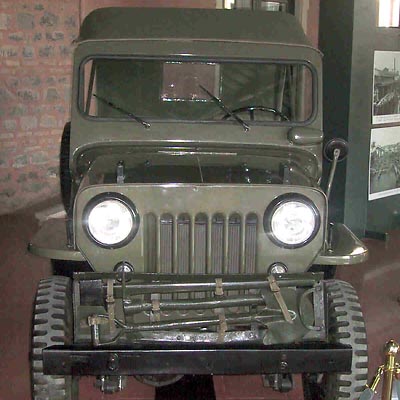 A restored military CJ-3B donated to the Rahmi M Koç Museum in Istanbul, Turkey, was our first concrete example of a Jeep built at the Turkish Jeep assembly plant in Tuzla, near Istanbul. Tony Phillipson, General Manager of the Museum, says, "There was a rumour that the vehicle was built/assembled in Turkey, and that it spent the last 20 years or so derelict in the yard of a local Ford dealer."

The Jeep had undergone a complete restoration before joining the extensive vehicle collection of the huge private museum of industry and technology. Since the details of that restoration process are not yet known, it is possible that some of the details found on this Jeep are a result of that work.

Tony points out one of the most obvious differences from a standard CJ-3B: "The windshield wipers are low and apparently driven from within the frame, by an electric motor in a bulge at the bottom corner of the windshield." Factory photos (see Turkish Jeeps in Army Service) have now shown this CJ-5-style wiper motor to be original, on CJ-3Bs built there in the 1960s and possibly 1970's. 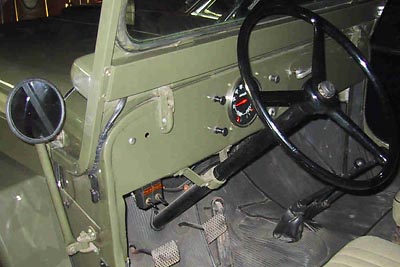 Two other unusual features that appear possibly original, are the leather-style boots on the shift levers, and custom-fitted rubber mats covering the floor and side walls. See also a view of the interior from the right side (80K JPEG).

The dashboard layout includes the parking brake handle mounted high on the dash, a feature introduced on U.S.-built 3B's sometime between November 1960 and February 1961 (see Dating a CJ-3B by Interior Details), suggesting that this Jeep was built in the 1960s. 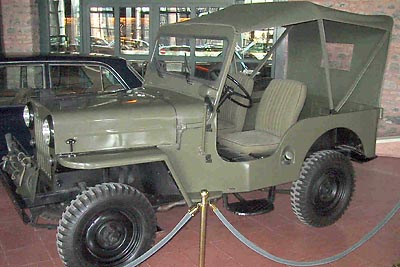 The new military-style canvas top was likely added during restoration, but it may reflect original hardware which was present on the vehicle. The full set of pioneer tools mounted on the front bumper is a distinctive Turkish army feature.

In the U.S., an original hood without a "WILLYS" stamping on the side would probably indicate a civilian CJ-3B manufactured after mid-1963, but might also indicate an earlier military version. This would probably also apply in Turkey if the the Türk Willys facility was primarily an assembly plant using imported parts. 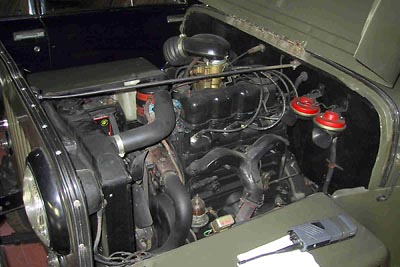 The dual horns mounted on the firewall, rather than a single horn on the left fender, are notable. The plastic overflow bottle inside the right fender, where a metal box containing the voltage regulator would normally be, is also unusual. The Hurricane engine carries Willys engine number 4J20035, which would date from 1953. Given the dashboard configuration which pretty conclusively dates the Jeep from post-1960, it would seem likely that its engine was switched with another Jeep during its military service.

See also the right side of the engine (80K JPEG). 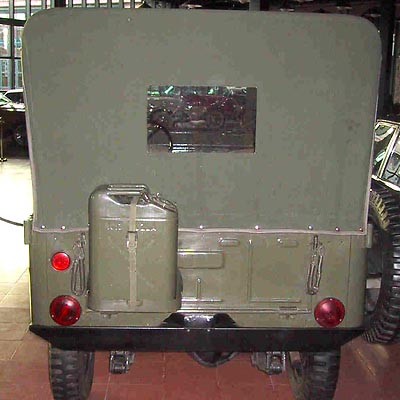 The taillights which are recessed into the body, and the solid rear bumper with no holes, are both features that are typical of later repairs or improvements.

Just visible on the rear-mounted jerrycan is a stamping reading "1013 TUZLA" which is another complicating detail in dating the Jeep. The "1013" apparently refers to the post-1972 military designation for the assembly plant in Tuzla (see Tuzla Jeeps in Turkey). This suggests that this style of Jeep was still built in Tuzla after that date, or it might simply mean this can is a later addition. 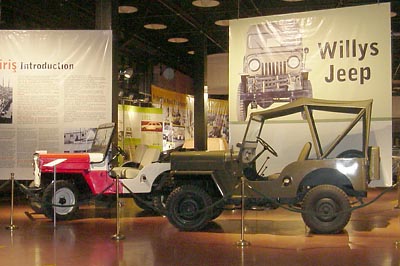 The Rahmi M Koç Museum held a major exhibition in 2004 to celebrate 50 years of the Turkish Car Industry. It featured the military Jeep seen above, and the first Jeep built entirely in Turkey, recently donated by the widow of the owner of Türk Willys Overland Ltd. from 1953-72.

The Museum is well worth a visit on the web, or in person if you're in Istanbul. Tony comments, "We have much of interest to North American visitors here in the Museum, including more than 20 U.S. cars, from a 1898 Malden steam car to 1960 Cadillacs. The aviation collection includes a DC-3, an F104, the front fuselage of a salvaged B-24 bomber, and a Bellanca 7 Citabria (that visitors can sit inside). Coming soon is a 1945 Guppy class submarine -- all 300+ feet of her!"

Thanks to Tony Phillipson for the photos and information. -- Derek Redmond