The Turkish Army used the Willys CJ-3B as a 4x4 utility vehicle for over 50 years! Serhat Güvenç in Istanbul told me in 2011 that the Army only began to retire their last CJ-3Bs in 2009, and may still have some in active service. So I thought we needed to add a new page to our earlier history of Turkish Jeeps in Army Service. 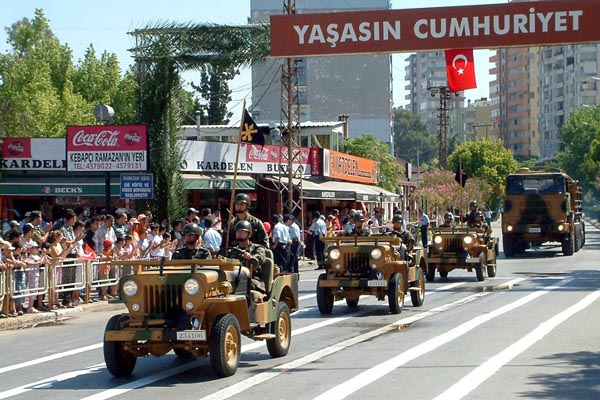 Serhat wrote in 2012, "I have just found an interesting shot of Turkish Army CJ-3Bs in desert camo from a Republic Day parade in 2005. This particular camo and the registration numbers suggest they belonged to VI Corps in Adana in southern Turkey."

Since in 2012 we were hearing about the military buildup along the border with Syria, I thought this photo of VI Corps, who are primarily responsible for that area, was timely. 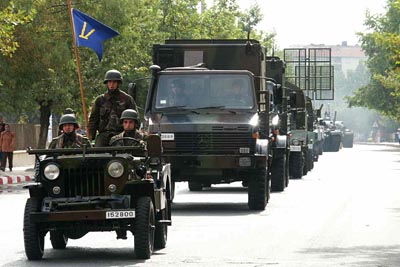 Serhat himself has taken some great photos of Turkish 3B's on parade, mostly in 2002 in Corlu (home of Turkish Army Corps V), and some taken as recently as 2009.

The flag carried by Jeep 152800 indicates it is leading the column of a signals company. 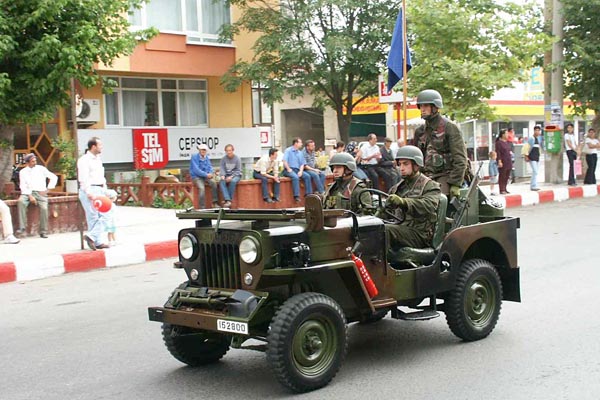 We don't know the date when the last CJ-3Bs were built at the "1013 Military Equipment Main Repair Factory" in Tuzla, near Istanbul. Likely in the 1970's or later, but most of them appear to still have been given the "Willys" stamping on the front grille. 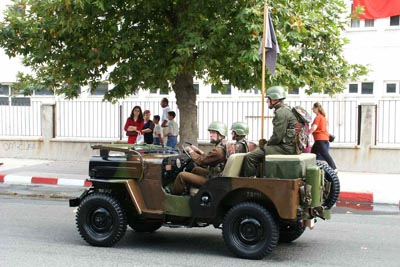 Jeep 176800 seen here is a stripped-down version, missing the blackout lamp, mirrors and fire extinguisher seen on most of the Jeeps. See also a front view photo (230K JPEG). 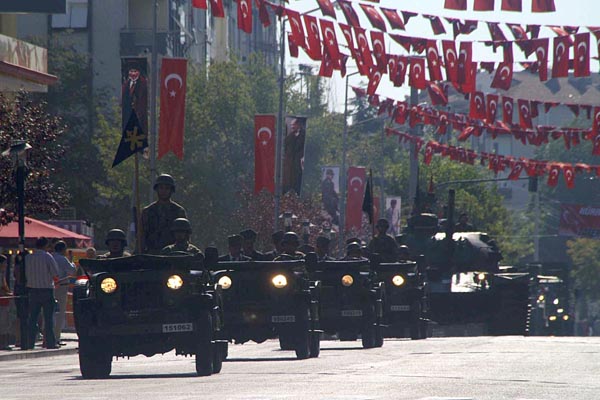 Serhat says this dramatic photo was taken on 30 August 2009 (Victory and Armed Forces Day) at Corlu, where the Jeeps were carrying veterans as well as unit pennants. See a closer shot of Jeep 151062 (160K JPEG) with Mustafa Kemal Atatürk (founder of the Turkish republic) looking down from a banner. 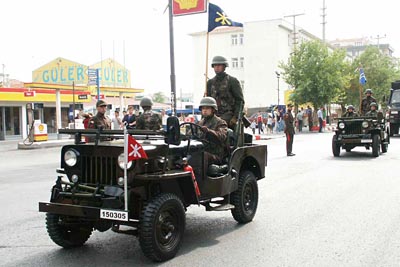 Serhat comments, "Sadly, the Turkish Army ended procurement of parts for the Tuzla CJ-3B Jeep in 2009. Their days are numbered, as without parts the number of roadworthy examples will go down sharply. We will not be seeing them even in parades anymore."

Jeep 150315 seen here is missing the "Willys" stamp on the front, which may indicate it was actually built in the 1960s when some parts were still being imported from Kaiser in the U.S. The pennant on the front bumper identifies the CO of a field artillery battalion. 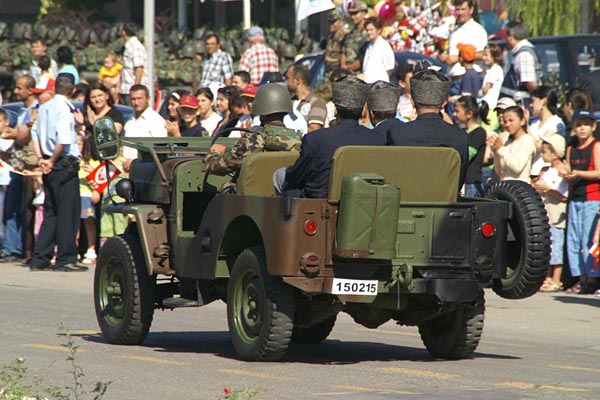 This rear view of Jeep 150215 shows a number of details including blackout taillights (while the front marker lamps are all civilian style.) And something I noticed for the first time in the large copy of this photo, is what appears to be the Tuzla factory designation "1013" stamped on the tailgate. 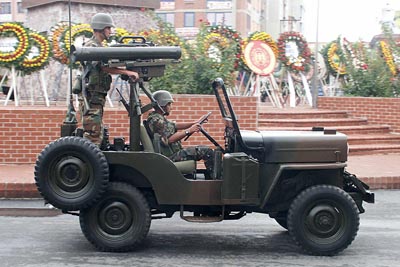 CJ-3Bs were also armed, in this case a MILAN anti-tank weapon of the 3rd Armoured Brigade in a Victory Day parade on 30 August 2004 at Cerkezkoy, Tekirdag. Serhat says, "It was the last time I saw Turkish Army CJ-3Bs in combat configuration. CJ-3B-based MILAN carriers were gradually replaced by another Tuzla product, the T-model." (See Turkish Jeeps in Army Service on CJ3B.info.)

Thanks to Serhat Güvenç and Sinan Nasirli. -- Derek Redmond

See the full story of Turkish Jeeps in Army Service and also the history of Tuzla Jeeps in Turkey on CJ3B.info.