The Swedish Army (Svenska armén) is one of a few military forces (along with Belgium, Switzerland, Spain and even Ireland) to have used the CJ-3A "civilian Jeep" for combat reconnaisance and as a weapons carrier, and possibly the only force to have mounted SS10 anti-tank missiles on CJ-3As in the 1950s. 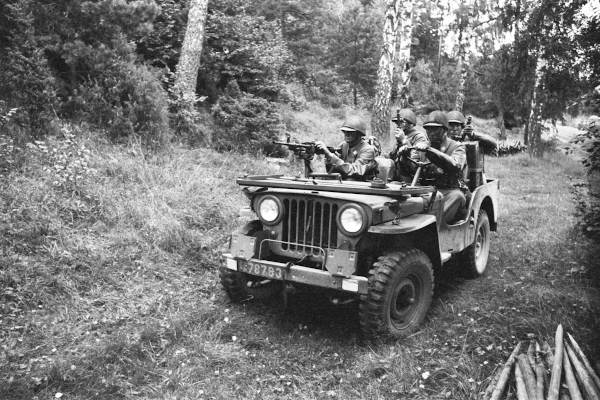 Leif comments, "They were purchased directly through the Swedish agent for Willys, Scania-Vabis AB, and were not received as aid. They received some modest military modifications such as blackout lamps, as seen on this CJ-3A on maneuvers."

Photo courtesy of the Military Archives of Sweden (Riksarkivet). 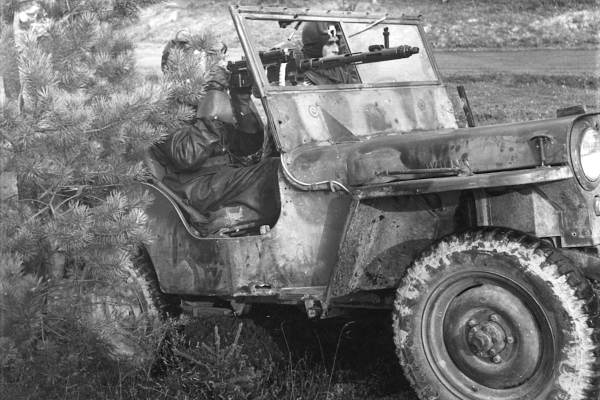 The majority of the Jeeps were CJ-3As. One of the few photos of a CJ-2A Leif ran across in the Svenska armén files was this one with an m/42 machine gun (a Swedish version of the Browning .30-cal) mounted to fire through one side of the split windshield.

Leif notes, "The windshield is fixed with a riveted-on wedge. The Jeep is camouflaged in the 1950-style Swedish camouflage of sand, green and brown. The crew is wearing leather coats, gloves and helmets usually worn by motorcycle couriers." 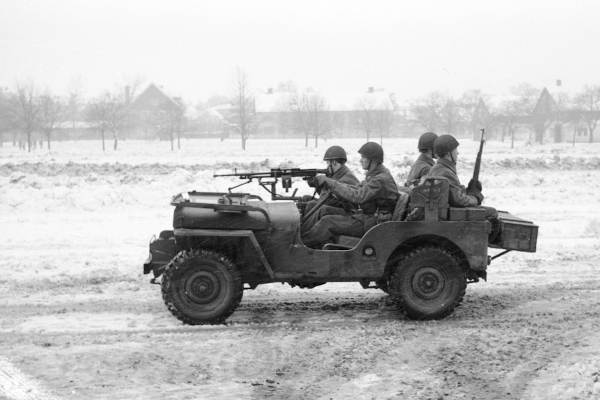 Machine guns commonly appear in Riksarkivet photos of the CJ-3As in service, but the only provision made for them is the lowering of the windshield. 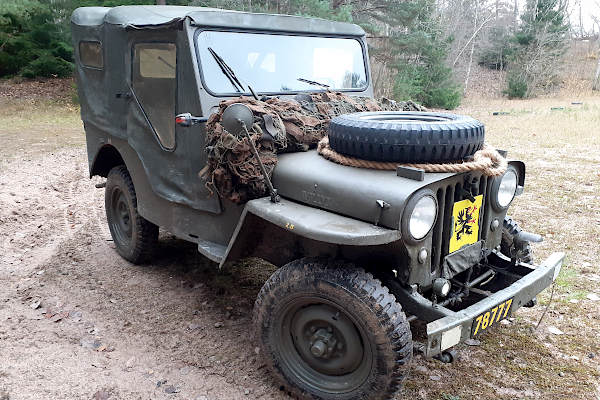 This surplus CJ-3A, serial number 78777, complete with all its Svenska armén details, belongs to Stefan Emilsson. The placard holder on the front grille carries the flag of his regiment, the former Södermanland Armored Regiment.

Blackout and position lights are mounted on the front frame, and the spare wheel on the hood. This hood-mounted spare was installed on many of the Jeeps, which is puzzling since it would prevent the windshield from being lowered for a machine gun. 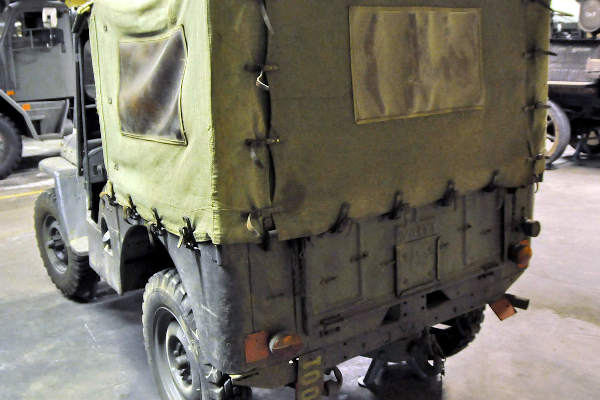 Another CJ-3A, preserved in the Swedish Army Museum (Armémuseum) in Stockholm, has a replacement canvas top. The Jeep was reportedly acquired from an engineering regiment in 1973, although it appears to have been off the books for some time prior to that, and has been given a fake military serial number, 0001. 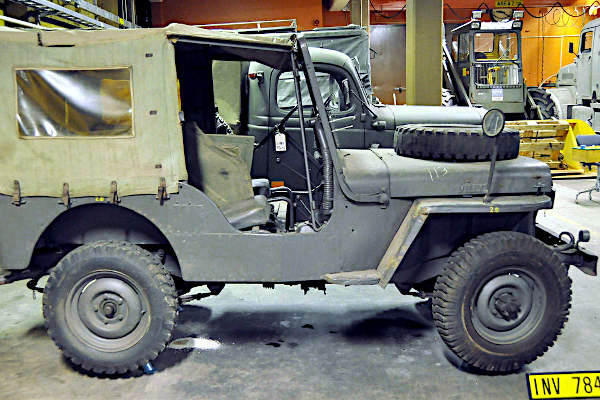 The blackout and position lamps on the museum's Willys are mounted directly on the front bumper, as seen in a front view (220K JPEG).

An archival photo of CJ-3A 78827 (320K JPEG) shows its auxiliary lamps mounted on the front fenders, and an interesting mixture of tires. 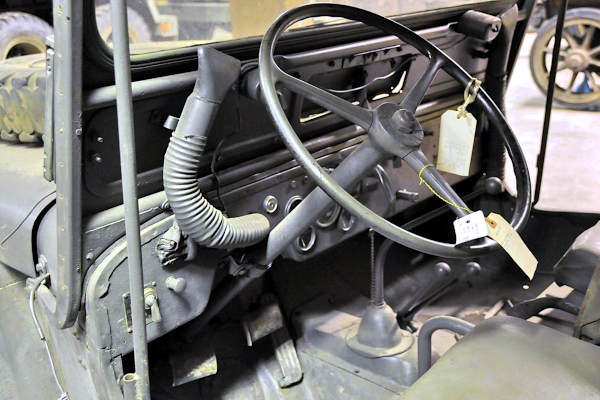 Notable in the Jeep's interior are the dual electric wipers and the dual defroster hoses.

Photos from the Armémuseum used under CC BY 4.0. 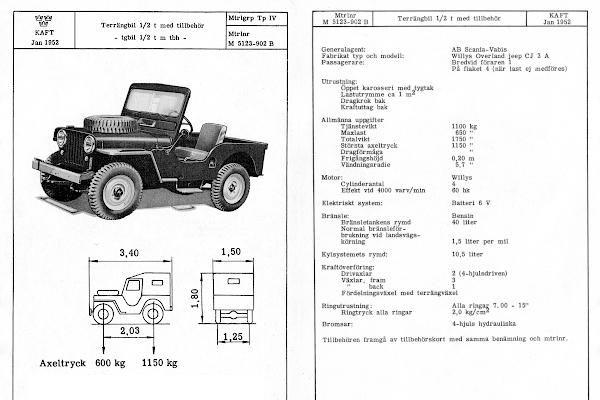 A military catalogue page dated January 1952, for the Terrängbil 1/2 t ("Off-road vehicle 1/2 ton") gives Swedish military type number 902B for the CJ-3A. Leif adds, "It wasn't used in huge numbers but there were enough for it to be considered a standard vehicle. The Terrängbil 1/2 t designation was the same for the MB, CJ-2A and CJ-3A, while their respective Swedish military type numbers were 901, 902A and 902B."

The picture is a Willys-Overland illustration (40K JPEG) with the hood-mounted spare tire added. 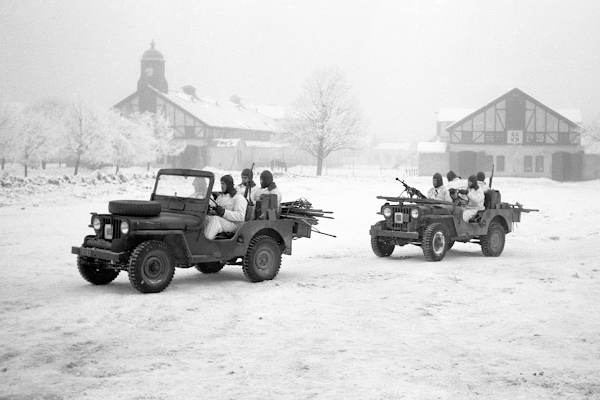 A great Riksarkivet photo shows a pair of 902Bs heading out on snow patrol. Standard location for two jerry cans is on the rear wheelwells, leaving the tailgate free for other gear, in this case the cross-country skis and poles.

The crew of 78787 is probably happy they have to keep their windshield up. But they might want to get 21816 out in front with the firepower. 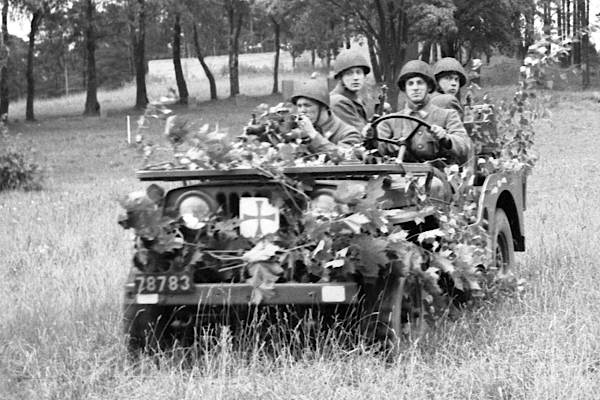 In warmer weather, 78783 has had some foliage applied as cover for its machine gunner. 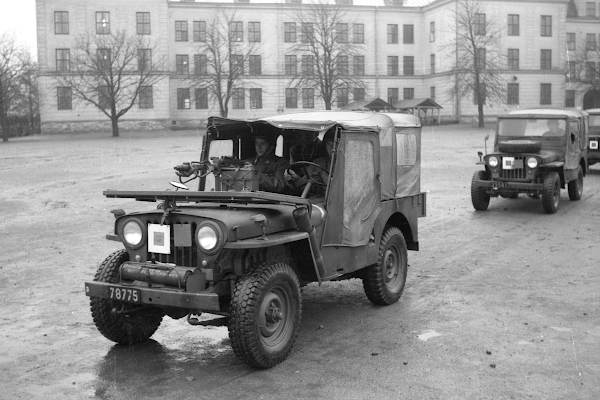 Here's another unusual photo; the rain dictates having the canvas up, but they're going to want to keep the convoy speed slow with their windshield down like that.

In addition to the machine gun, 78775 is carrying multiple ammunition canisters for a Carl Gustaf Granatgevär m/48 84mm recoilless rifle. 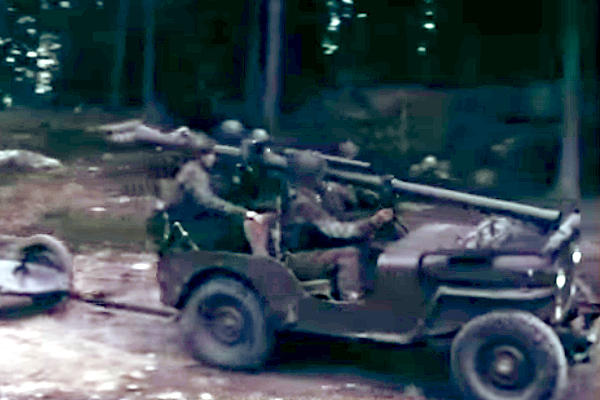 This frame from a late 1950s film shows a Swedish Jeep with a prototype installation of the Bofors 90mm recoilless rifle, later installed on Volvo vehicles. Once again, the windshield has to be down to provide clearance. It's surprising the Army didn't install the M38 split windshield kit from Willys which would have fit the CJ-3A, and was designed with a gap for the barrel. 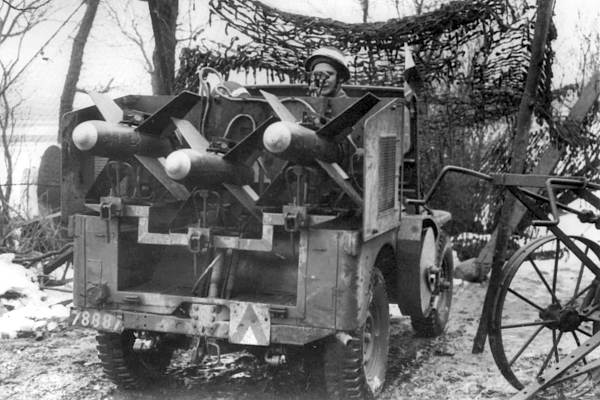 Leif Hellström provides the story on this Svenska armén photo: "Sweden put six Jeeps to an interesting use. They were converted to carry French SS10 anti-tank missiles in 1957-58 and it seems a platoon was set up for testing purposes. The Jeeps are just mentioned as being Terrängbil 1/2 t in documents so they could have been any version, but at least one was a CJ-3A: vehicle 78887 seen here has a 3A windshield." 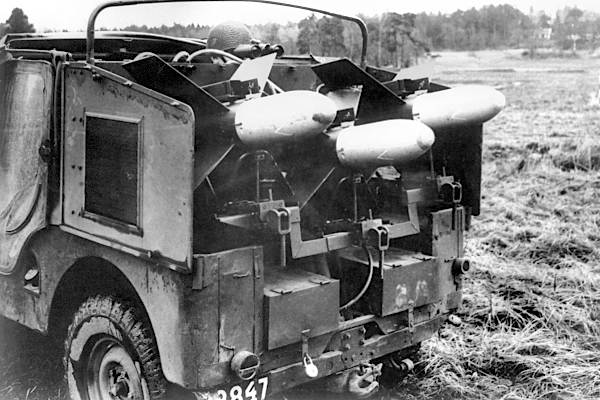 "The same missile mount -- the whole box at the rear -- was also used briefly on Jeeps by other countries, including France on the M201 and the United States on the M38A1C, but it seems Sweden was the only one to use it on CJs."

Note: when France and other countries moved from the SS10 to the next-generation ENTAC missiles, the Belgian Army mounted their ENTAC launchers on The Belgian Army CJ-3A. 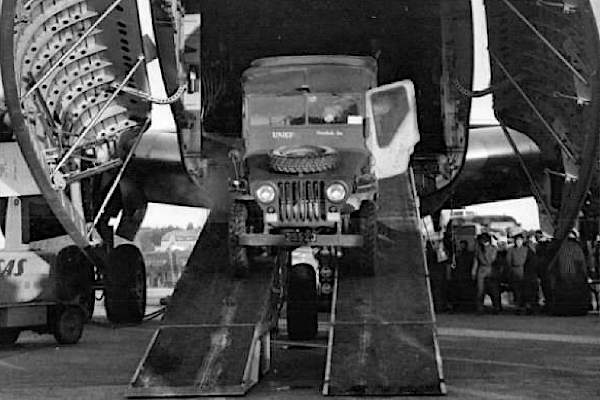 The Swedish Army's first combat in the 20th century was in fact peacekeeping missions in Africa and the Middle East. Leif says, "Only one or two Swedish Jeeps were sent to the Sinai. The other ones used by the Swedes there were provided by the UN."

This photo shows the loading of CJ-2A 25523 for transport to Egypt in 1956. See also UN Jeeps in the Sinai and Military Jeeps in the Congo, Part 6. 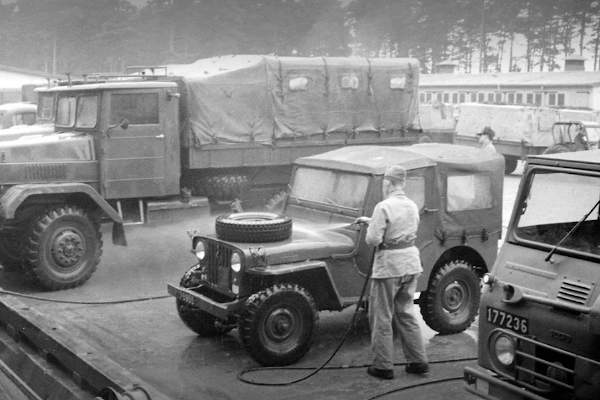 Thanks to Leif Hellström, Stefan Emilsson, the Military Archives of Sweden (Riksarkivet), and the Swedish Army Museum (Armémuseum) for photos used under CC BY 4.0. -- Derek Redmond

The Swedish military ensign at the top of the page was drawn by David Newton and is used under CC ShareAlike 3.0.