The Belgian Army, known in the country's two national languages (French/Dutch) as Armée Belge/Belgisch Leger or "ABL", is one of the few national military forces (along with Sweden, Switzerland, Spain and the Netherlands) to have used the CJ-3A "civilian Jeep" for combat reconnaisance and as a weapons carrier, including their fleet of ENTAC anti-tank-missile Jeeps in the 1960s.

Many U.S. Army jeeps were put out of action during the "Battle of the Bulge" in the Ardennes forest of Belgium in December 1944. Left on the battlefield to later be recovered by the local population, they were then given a new life in farming and forestry. (1) 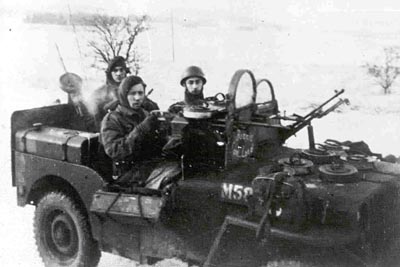 Meanwhile, the 5th Special Air Service (5 SAS) was an elite airborne unit consisting entirely of Belgian volunteers, which saw action as part of the British SAS Brigade in Normandy and northern Europe. Initially trained in sabotage and intelligence gathering, they also engaged in reconnaissance and raiding in armed jeeps (left).

In September 1945, 5 SAS was transferred from the British Army to the newly reformed Belgian Army (ABL) and renamed the 1st Parachutists Regiment. In 1952 the traditions of 5 SAS were continued when they became the 1st Parachute Battalion (1 PARA) of ABL's new Paracommando Regiment. (2) 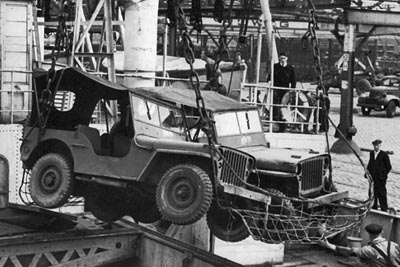 After the war the Belgian Army inherited several hundred Willys MB (and Ford GPW) jeeps which were distributed among various ABL units. 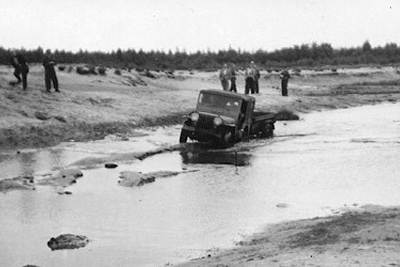 In June 1951 the Army did comparison tests of a Series I Land Rover and a Willys CJ-3A, seen here. (4) Eventually the Land Rover was selected, in part because of the economic incentive of revitalizing the Minerva factory in Antwerp. The Minerva Land Rover (90K JPEG) (3) became the Army's primary light reconnaissance vehicle for the next several decades. 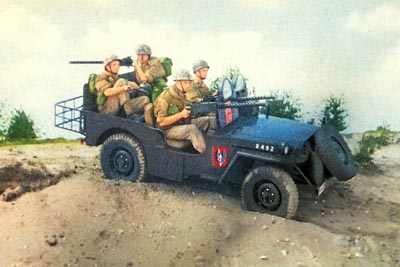 The 1st Parachutists in particular had become attached to the old Willys MB's because of the history of 5 SAS. When ABL replaced the jeeps with the larger Minerva Land Rover in 1952, the paratroopers considered it unsuitable for quick deployment, and continued to use their MB's. They successfully pressured the government to purchase some new Willys Jeeps. (1)

Whether because of cost or American export restrictions, ABL decided to buy CJ-3As, rather than the M38 which Willys Overland had been building in Toledo for the U.S. Army. Initially some units acquired civilian 3As from importers Wilford and/or Berg, but subsequently an order of purpose-built military CJ-3As was assembled in Belgium under license by Ateliers de la Dyle, who took over as Willys importer in 1953. 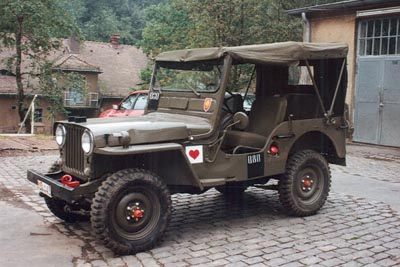 The ABL CJ-3A was designed as a military version of the civilian Jeep, along the lines of Kaiser Jeep's later M606 version of the CJ-3B, built for military export. Unlike the M606 however, the Belgian 3A used a NATO-standard 24-volt electrical system. The front grille had both blackout and normal marker lights, and other details included blackout driving light, grab handles, tow hook on the front, and pintle hook on the rear. 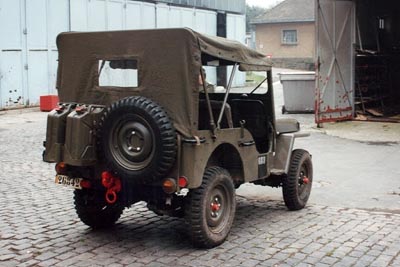 Unlike the M38 tailgate which was bolted shut, the Belgian 3A tailgate was welded shut (185K JPEG, photo by Phillipe Deweerdt), with a distinctive mount for the spare wheel.

The total number of these Jeeps produced is unknown -- it may have been more than a hundred. Serial numbers are spread out within the Willys-Overland 1952 range, with the standard 452-GB1 prefix. Photos courtesy of the ABL History Forum. (5) 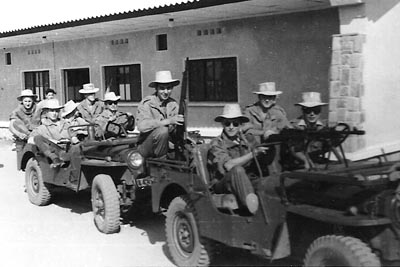 The Paracommando Regiment proudly adopted their new Willys Jeeps, which were soon in use in the Belgian colony of the Congo. (1)

Visible in this 1955 photo from the Congo is another distinctive feature of the ABL CJ-3A -- a raised passenger grab bar, being used here to support a light machine gun. (6)

For more details, including occasional use of CJ-3Bs by the Belgian military, see Military Jeeps in the Congo, Part 1: The Early Years on CJ3B.info. 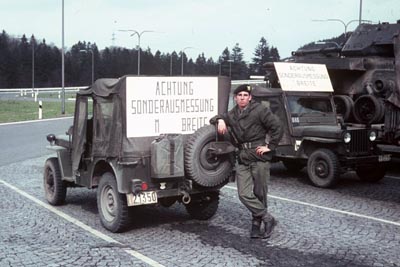 Philippe Deweerdt notes that, "Many of the 3A's were stationed in Germany after the war, as a small part of a larger Allied occupation army. The service was called Belgische Strijdkrachten in Duitsland (BSD) or 'Belgian Forces in Germany.' The BSD had its own purchasing department, which resulted in many accessories in the Willys with the label 'made in Germany.'

"The BSD zone was an extension of the Ardennes, and was notorious for freezing winters. Temperatures below -20°C (-4°F) were common -- and the Willys had no heater!" 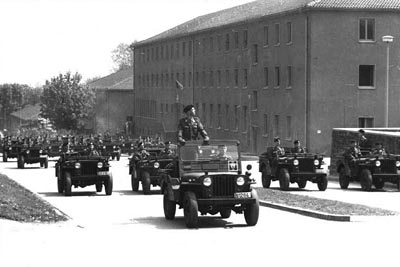 BSD Jeeps on parade at the Reigersvliet Barracks near Arnsberg, Germany on 7 May 1960. This BSD headquarters was named for a 1918 battle between the Belgian and German armies in World War I, and was in use by the Belgians until 1994. 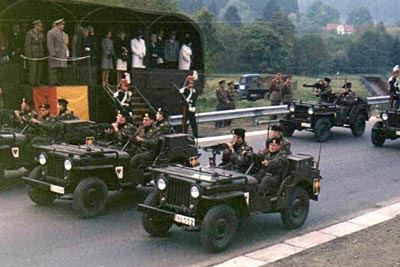 CJ-3As with machine guns, at Reigersvliet in 1968. BSD used symbols such as playing-card suits to indicate battalions, a practice perhaps picked up from the U.S. Army's 101st Airborne. 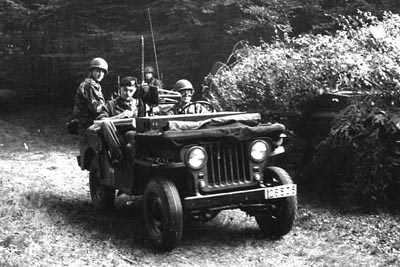 This Jeep on maneuvers in 1969 appears to have a heavier machine gun mounted. The grab bar is removed and the windshield folded down, to make room for a locker -- possibly ammunition. 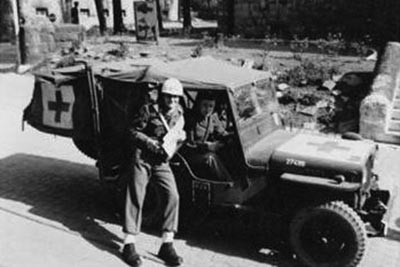 There was also an ambulance variant of the Belgian CJ-3A. I would like to find a better quality photo of the ambulance, and the Military Police version (30K JPEG). 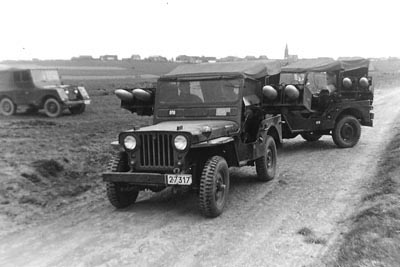 When Belgian forces left the Congo in 1962, the attention of the Paracommando Regiment became focussed on NATO duties in the European theater, and they clearly needed improved anti-tank capability. In March 1963 the ATk (Anti-Tank) Company was created within the regiment, with 129 personnel. (7)

ATk Co. was equipped with the ENTAC (ENgin Téléguidé Anti-Char), a French-built, wire-guided anti-tank missile. Launchers were mounted on Jeeps as seen here. In the background is a Minerva Land Rover. 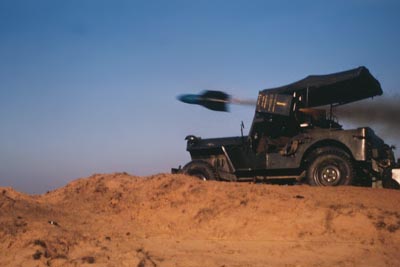 ATk Company's CJ-3A ENTAC configuration was similar to that used by the French Army on the Hotchkiss M201 Jeep. It's not clear where the design originated -- the ENTAC entered service with the French army in 1957, but like the Belgians, their first M201 Jeep launchers were tested in 1963. (8)

This photo taken at the army base at Leopoldsburg in northeast Belgium, shows the rear roof supports removed to accommodate the launchers, which swivelled into the back of the Jeep for transport. 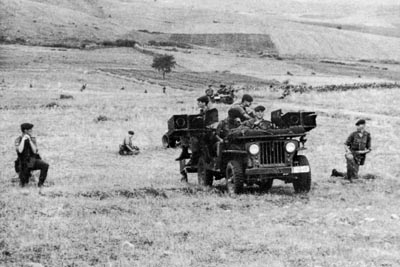 An ENTAC CJ-3A is seen here on NATO maneuvers at Otterburn, the UK's largest firing range. The joystick and telescopic sight used to guide the missile could be operated from up to 100m away. A good deal of practice was required to achieve any accuracy.

The ENTAC was also used by the U.S. Army with the designation MGM-32A, from 1963 until 1968. Reportedly it was mounted on the M-151 MUTT in Vietnam (9) although I have seen no photos of that configuration. 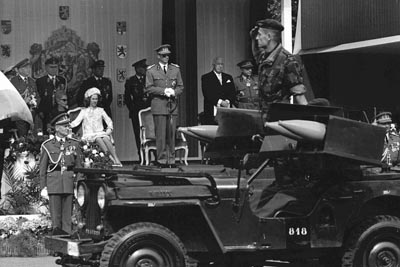 The aging 3A's were probably polished long and hard the day before this parade in front of the King and Queen of Belgium on 21 July 1969, the national holiday commemorating the inauguration of the first King of the Belgians in 1831.

The Jeeps could be driven with the ENTAC launchers in firing position.

But for transport over distances, the launchers folded back into the rear of the Jeep, with some space below for stowing additional rounds. See detail photos of the French M201 ENTAC at M201.com.

This photo of ATk Co. was taken in June 1969 in Greece. The large copy (300K JPEG) reveals what appears to be a CJ-3B in the backgound. 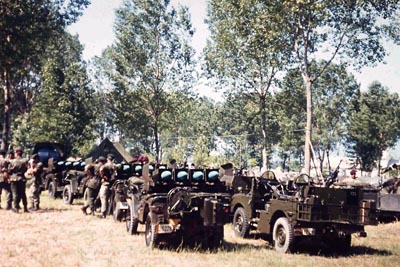 The three platoons of ATk Co. served with the three battalions of the Paracommandos -- a total of perhaps a dozen Jeeps. 2nd Commando Battalion (green berets) is seen here with the 3rd Parachute Battalion (maroon berets) in Greece in 1969. The cable reel seen on the back of this Jeep, carries a 100-meter cable connecting the ENTAC remote guidance control to the launcher.

On the right is an armored Minerva Land Rover.


The Minerva Takes Over 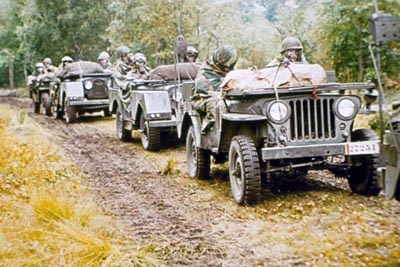 The Willys CJ-3As remained in service with the ABL's paratroopers into the 1970's, but were gradually replaced by the Minerva Land Rover (also made in Belgium, and seen in the background here) and later by the VW-Bombardier Iltis.

See also Military Jeeps in the Congo, Part 18: Land Rovers and Other 4x4s on CJ3B.info. 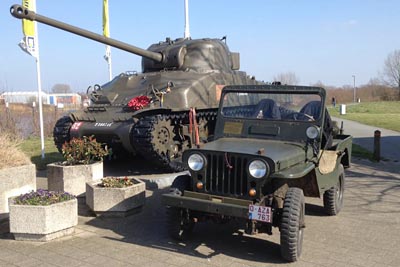 Surplus CJ-3As were sold to the public, but according to Jeep Club BeLux (1), few owners are aware of the unique "made in Belgium" origin of the Jeeps.

This example is being restored by Philippe Deweerdt in the Ardennes area. He photographed it with a British Sherman tank which in 1944 was rushed to a bridge across the River Schelde because Allied Command feared that the Germans would blow the bridge to slow the Allied advance. Under the command of Belgian Lieutenant Vekemans, the tank protected the bridge, allowing the Allies to cross the river and liberate Antwerp, shortly before the Battle of the Bulge.

Thanks to Philippe Deweerdt and to the ABL History Forum. -- Derek Redmond

Elsewhere on the web, see more detail on ABL Jeeps in the blog Belgian Jeep in French.