Mahindra Jeeps in the UK 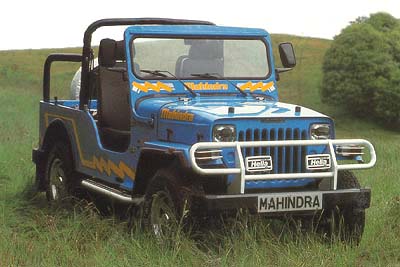 This "CJ Deluxe" model was one of the late-80's/early-90's Mahindra CJ-3Bs built with rectangular headlights (see Updating the High Hood for the 1990's). Another unique feature of these Mahindras was a fiberglass grille and hood. Keith King in East Anglia also reports: "A few of the later imports to the UK of Mahindra Jeeps had front disc brakes, and the parking brake removed from the rear propshaft and operated by cable into the rear brake drums. These models are few and far between."


The Deluxe was one of several Jeep models built by licenced Jeep manufacturers Mahindra & Mahindra of India and sold in Great Britain by importers from about 1990-1995. It's not clear how many Mahindra vehicles were imported in total, but as of 2008 there is still a significant owner community in the United Kingdom, no longer supported by a dealer network. 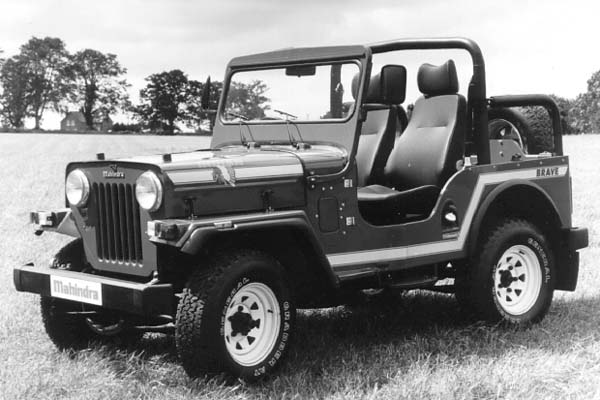 The CJ340 variation of the CJ-3B was the first Mahindra import into Great Britain, arriving from India via an assembly plant in Greece. In a confusing tip of the hat to the Jeep Cherokee Chief and to this Jeep's manufacture in India, the model was dubbed the "Indian Brave" (and the 91" long-wheelbase version CJ540 was the "Indian Chief"). The graphic on the hood, of a native American headdress, is more clearly visible in the larger version of this photo (40K JPEG). The name was later changed to the "CJ Classic". 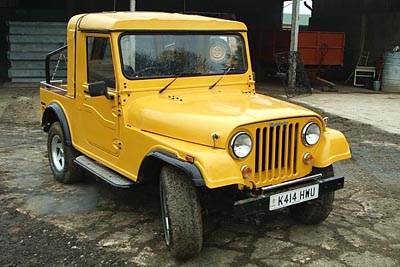 This later MM540 model was dubbed the "Marksman" in the UK. With styling derived from the CJ-7, and different roofs available, it was still basically a variant of the CJ-3B.Martin Gliddon's yellow Marksman finished a two-year chassis-up rebuild and body modification in 2005. He commented at the time, "I said after the last rebuild that I would never do it again, but these things just get in your blood don't they? Anyway, she is affectionately known as Tweety, because she's yellow and very cute looking." 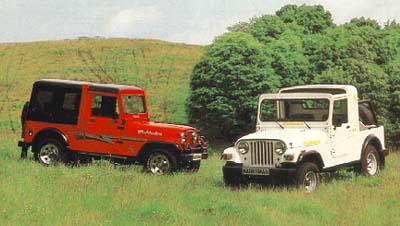 This photo was taken during the production of a promotional videotape showing the "Marksman" and the "CJ Deluxe" in action (see the tire tracks on the hill in the background).

One of the factors which apparently ended the importation of Mahindras into Britain was the number of warranty claims and the question of whether the factory or the importer was responsible for settling them. 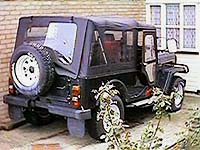 Shane Trafford was a Mahindra owner in Great Britain who was less than happy with his latter-day CJ-3B. In 1997 he told CJ3B.info: "This jeep is only three years old (purchased in May 1994) and it has never been offroad -- it has only done two hundred miles because a number of faults were discovered two weeks after the thing was bought and our solicitor told us to stop using it while he tried to get a settlement from the garage where it was bought." Over twenty specific problems were identified in an Automobile Association inspection of Shane's 340, mainly related to poor quality assembly and painting, missing small parts, loose bolts, leaking oil and fuel, and corrosion.

Thanks to John Carroll for the photos from Mahindra brochures. -- Derek Redmond