Updating the High Hood for the 1990's

There have been lots of minor changes in the Universal Jeep over the years, and some fairly major developments like the new round-fendered sheet metal on the M38A1, the available V-6 and later V-8 in the CJ-5, or the coil springs of the recent TJ. But nothing has ever created the kind of stir among Jeep fans like the change from round to rectangular headlights on the 1987 YJ Wrangler (40K JPEG).

I guess headlights are one of the first things people notice in looking at a vehicle, like a person's eyes. And initially the stir may have been partly due to AMC's clever marketing strategy, in which they first announced the death of the CJ-7. Only after the outcry which resulted, did they announce it would be replaced by the Wrangler, a vehicle as much at home on pavement as on dirt. And oh, by the way, it would have square headlights.

Those headlights still serve as a symbol, in banter among Jeep fans, of a vehicle suitable for use and modification for either of those two kinds of driving, as opposed to "real" Jeeps which would never be truly at home on the road. 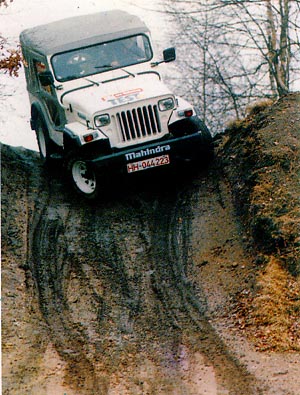 Licenced Jeep manufacturer Mahindra & Mahindra in India has for many years been developing new Jeep variations to suit their own market. These have generally been utilitarian rather than stylistic upgrades, as the continued production of CJ-3B body style demonstrates. However, immediately following the introduction of the YJ by AMC in the United States, Mahindra adopted rectangular headlights (with a fiberglass grille and hood!) for a new CJ-3B model for export sale called the "Bahia."

The name "Bahia" was apparently taken from the Brazilian state of Bahia, and was presumably chosen as something exotic-sounding, not unlike the more recent SUV from Mahindra dubbed the "Bolero."

This photo of a Bahia undergoing an off-road performance test, comes from a "Mahindra Overseas Operations" brochure published in India, featuring photos which appear to have been taken in various European countries. Likely the Jeeps were assembled in Greece for sale in countries including Italy and Germany. See a 1991 Mahindra CJ340 sold in Belgium. 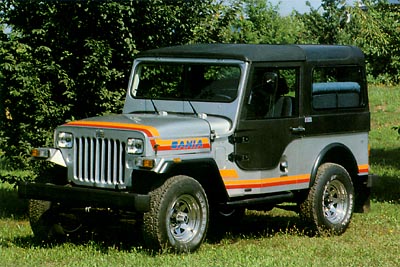 The Bahia models included a long-wheelbase version, referred to as the "CJ4D" in the late-1980's Italian brochure from which this photo is taken. The photo shows the optional hardtop and the silver paint available on the Bahia trim version. The base versions of the CJ4D and shorter CJ3D were offered in only basic red, blue or white, according to this brochure.

A version of the Bahia design was sold in Britain in the early 1990's as the "CJ Deluxe" (see Mahindra Jeeps in the UK). 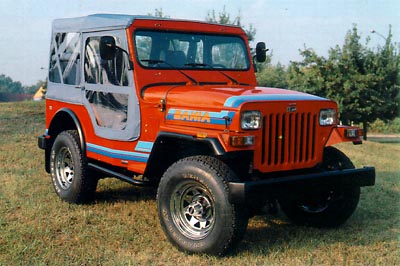 At a second glance, you realize that the changes in this fiberglass front end go beyond just the square shape of the headlights. The sealed-beam lamps project in front of the grille slightly, rather than being recessed as on the YJ. Since the headlights are smaller than the original round ones, an extra slot has been added at each side of the grille (and for some reason those new slots are shorter than the rest). In addition, the new one-piece hood slopes down slightly at the front, making the height of the hood above the fenders less obvious. The resulting appearance reminds me of the CJ-10 truck (30K JPEG), built in small numbers by AMC in the U.S. and Australia. 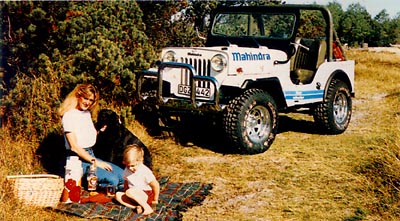 The Bahia was offered alongside the "Classic" version of the Jeep (photo at right), in the 1987 Mahindra export brochure. Oddly enough, Mahindra was using the same "CJ 340" model number for both versions. Although they appear quite different, they were mechanically identical, offered with either a 2555 cc gasoline engine or a 2112 cc Peugeot diesel.

Thanks to Pete Pearson for the Indian and Italian brochures, Mike Albright for the YJ photo, and Srivardhan Srinivasan for additional information. -- Derek Redmond

Elsewhere on the web, the Mahindra & Mahindra web site offers a look at the range of models currently available.