Japan's Mitsubishi Motors reportedly produced some 200,000 Jeeps from 1953-1998, most of them based at least partly on the CJ-3B (see Jeeps in Japan.) They have made their way to some surprising corners of the world. 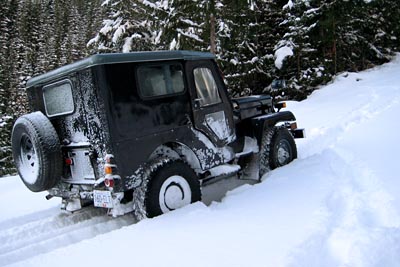 Mat Phelps sent some great shots of his 1988 Mitsubishi 4DR6 Turbo Diesel. One of the final direct descendants of the CJ-3B, which was built in Japan starting in 1953, this Jeep has a 24-volt system, Warn overdrive and locking hubs, plus Mat says, "Mitsubishi put in delayed wipers and a fairly good heater, so you can drive with no gloves at -30. I built the hardtop, making it a good everyday driver." 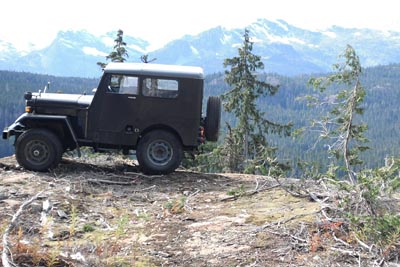 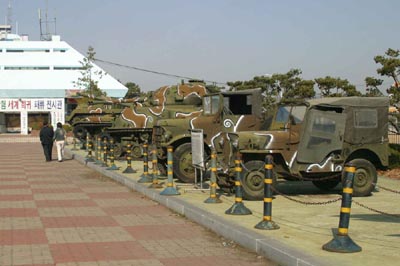 Marine 1st Lt. Jonathan George sent these photos of a Mitsubishi CJ3B-J4C on display with a number of vehicles used by Republic of Korea forces during the Korean war. (It seems unlikely this Jeep was actually used in the 1950-53 conflict.) Jonathan says, "While on a tour of the Demilitarized Zone separating North and South Korea, I stumbled across this display. The Jeep looked to be fairly complete, but was in pretty poor shape from sitting outside for all these years. The display sign is pretty interesting too." 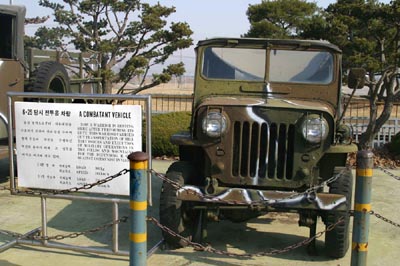 The sign reads: "Now a warrior is resting here after performing its duty. This warrior carried out transportation of military forces and execution of military operations in the fields and mountains for the defending R.O.K. against Communist invasion."

See also an interior photo (50K JPEG). The interior won't be there much longer if they don't fix that roof. Looks like at least somebody's given the Jeep a new coat of camo paint since the fifties. Thanks to Jonathan for sending the photos. 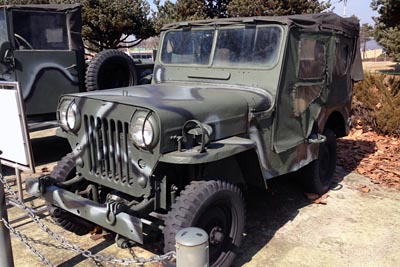 In early 2014, Jonathan was in the DMZ again, and reported, "I had a chance to revisit that old warhorse 3B this past weekend. Sadly, it's seen better days and appears to have been left for dead. It's rusting away. If you look underneath it (180K JPEG) even the muffler has fallen off. The doors are now screwed closed and it appears that every bolt is likely fused or seized. I think it's been repainted though..." 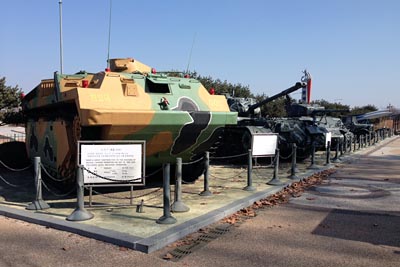 Most of the tanks and trucks in the display now have the simpler, green camo paint job, except for the landing craft at the end of the row, which has received some deluxe three-color camouflage. It looks very bright, but may actually be fairly close to the camo used on some Korean-era U.S. armor. It's not clear whether the other vehicles will receive the same treatment.

This plaque reads, "LVT (USA). Gave a great contribution to the success of Inchon landing operation on Sep. 15, 1950, and following Seoul recovery operation." 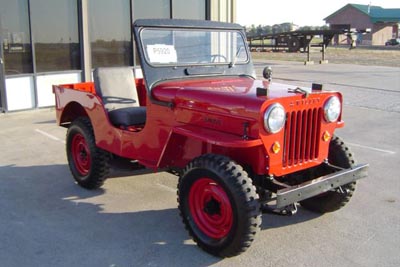 There's a bit of a mystery surrounding this 1958 Mitsu CJ-3B, which was also featured in an Old Iron magazine column by Jim Allen. It was advertised for sale online in 2005 with the claim that it was a prototype produced in the U.S. for Mitsubishi. But by 1958, the Jeeps had already been built under licence in Japan for five years, so this one is more likely a sample sent from Japan to Toledo. Apparently kept at the Toledo Jeep plant for a number of years and then donated to a local cemetery, it wound up in a private collection. The frame number (70K JPEG) is 58CJ3BM12550M, which confirms that it's a 1958 model. The Willys name is stamped on one side of the hood, and Mitsubishi on the other. The grille has both the Willys name and Mitsubishi logo, which also appears on the rear axle (70 K JPEG). 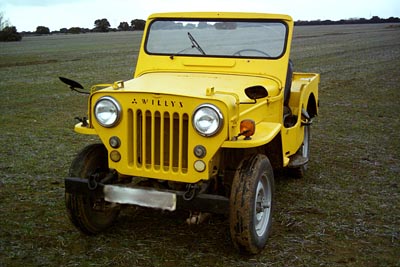 Not long after the orange one was shipped to Toledo, this '59 was headed for Spain. It was apparently first registered in the city of Bilbao in 1959, and had three owners before Willie Cabrero bought it in 2005 in a village near Madrid. He says, "The Jeep is generally good, needs some work on brakes, electrical system, transmission... otherwise the diesel engine runs well and the chassis is also in good condition. I would like to do an original restoration but it is very difficult find information in English or Spanish on these Jeeps. The chassis number reads 59CJ3BM16245." 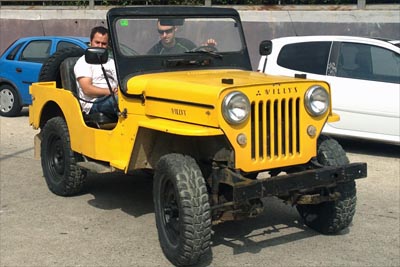 And here's another Mitsi in Spain: "My name is Enric Aragó, from Barcelona, Catalonia (Spain). I have an old Mitsubishi Willys CJ-3B. My grandpa bought it in 1962 in Oviedo (Spain) at a mining industry auction. It was registered in Spain in 1958. My dad and my grandpa were using the CJ-3B every day for 20 years carrying fuel for his bulldozers. It has a yellow body (like a bulldozer) because my father painted it in the 70's.

The main change that it has suffered is the engine: my grandpa changed the original engine (a Hurricane maybe?) for a Barreiros one (the same engine that was mounted in the Willys-Viasa in Spain), because in Spain the gasoil (diesel) was cheaper than gasoline."

"Nowadays we are working on the CJ-3B again. The car is in perfect mechanical condition cause my dad is a mechanical genius (100K JPEG), but it has a little damage on some parts (body, tailgate, paint, soft top and mirrors.) I hope my little son can enjoy it, as me, my father and my grandpa enjoyed the CJ-3B." 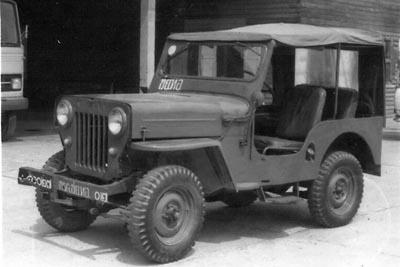 A catalogue of historical vehicle photos on the website of the Directorate of Transportation, Air Support Command of the Royal Thai Air Force, includes a number of Jeeps. This bone-stock early-50's Willys CJ-3B appears to have been maintained in good shape. A Willys CJ-6 (70K JPEG) is more unusual with its front winch and locking hubs, half doors, split-pane ventilating windshield, and rear fenderwell seats. 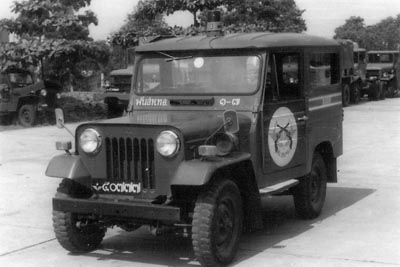 This photo of a Mitsubishi J20 is dated 1970, although the date may not be reliable. The Jeep has a siren, flashing light on the roof, and a logo with crossed pistols, suggesting perhaps a Military Police unit.

Other high hood Jeep photos on the site include a Mitsubishi J4C dated 1959 and Mitsubishi J3R dated 1974 (70K JPEGs). 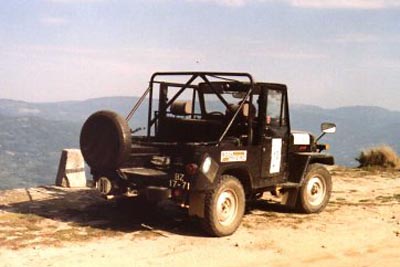 Meanwhile, Luis Enes says his Mitsubishi J25L was sold in Portugal in 1978, which suggests that Mitsubishi continued trying to make some inroads in the European market even as EBRO Jeeps were being built next door in Spain. However, this Jeep has a 24-volt system, so it's also likely it was originally intended for military service. 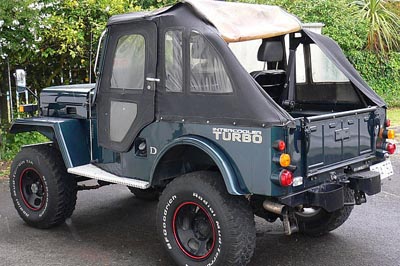 Late model Intercooler Turbo: Ivan in New Zealand wrote, "I recently acquired a 1996 Mitsubishi Jeep 2.7 Turbo Diesel, model J55 with a 4DR5 engine. Have taken it on 4x4 club outings, and there is hardly another vehicle that can get out of situations that this Jeep can! Maybe only the Landcruiser competes! I was told that only 300 units were produced in 1996. I have great difficulties obtaining information on maintenance, re-building, and any other info relevant to the car. In fact, I can not even find an owner's handbook and repair manual." 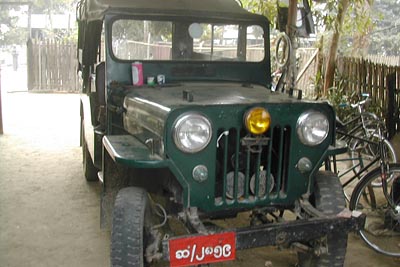 This picture comes from a web album called Burma Jeeps, with photos showing a variety of flatfenders seen in that country in 2006.

The fog lamp on this one reminds me of a Volvo I had back in the 1970's. But the great feature is the dual horns positioned in the grille for maximum volume. 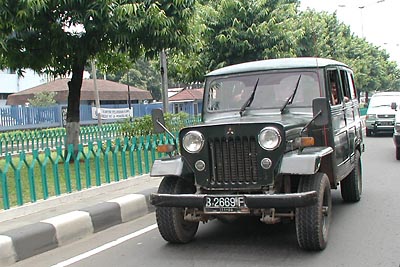 Mitsubishi built more than 30 different Jeep models in Japan between 1953 and 1998. This later station-wagon model, photographed in late 2001 in Jakarta, Indonesia by Roi Permadi, shows the only significant styling change made over 45 years -- the front fender skirts. 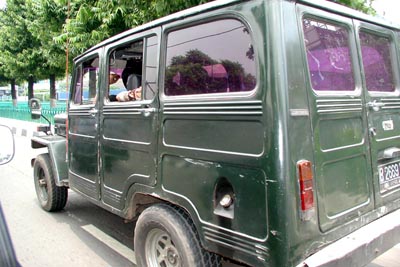 The rear view as the wagon passes, provides a good look at the long wheelbase and five-door body on this model. 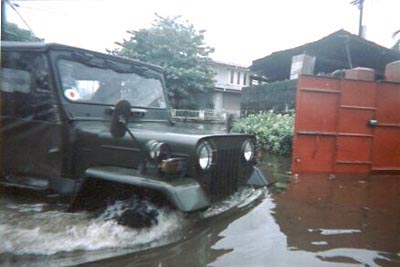 The same front-end configuration, but with military-style lighting instead of the twin horns of the wagon, is seen on this army surplus J24A. It belongs to Edwin C. Go in the Philippines, who says "I bought it in Angeles City from a local used car dealer. It came as surplus from Japan. There are quite a number of the same model running here, and some have already changed their color. I bought it because the road going by our house is a flood-prone area (20K JPEG). The Jeep was a big help to us in getting through it." 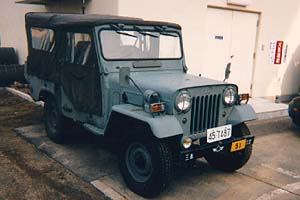 The J24A was also used by the Japanese Navy. This one has a loaded front end, with three wipers, dual blackout lamps and marker lamps, extra driving lamp, dual front mirrors, and headlight guards. The only thing missing is a winch.

Noted high-hood detractor Hobbs sent us these two photos from Japan in 1999, and commented "Note the one nod towards good looks on the Jeeps -- the bent-down fenders!" 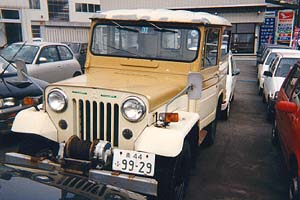 Here's a winch, on the front end of a J20 medium-wheelbase two-door hardtop version.

Hobbs also said, "You can't tell in the pix, but "Jeep" is embossed on the sides of the hoods. They appear to have Dana axles properly offset for a 3B, but I don't know about the rest of the drivetrain." 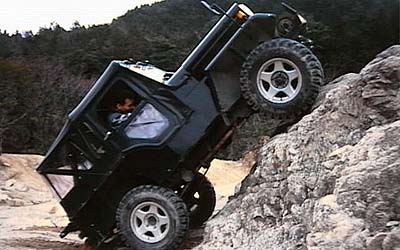 Meanwhile, in Japan (like everywhere else) off-roaders sometimes get a little over-enthusiastic, and may find themselves in a difficult spot. Take for example this photo of Makoto Hirakawa's Mitsubishi J56. This updated CJ-3B clone was one of the last models built by Mitsubishi before they stopped producing Jeeps in 1998.