The Mitsubishi J20 (left) produced in the 1960s is one of over 30 different Jeep models based on the CJ-3B body style, and built in Japan under licence from Willys from 1953 through 1998.

See an illustrated chart of all models at the bottom of this page.

Seven passengers in a CJ-3B looks crowded, even in this J20, which is eight inches longer than a standard CJ-3B. This illustration of its capacity was featured in a Mitsubishi brochure. 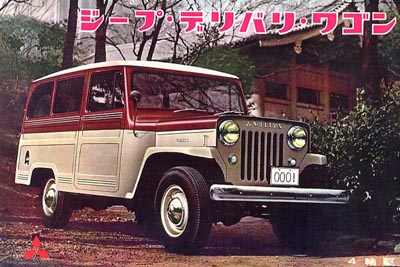 The Mitsubishi Jeeps have been built with short, medium and long wheelbases, with various gasoline and diesel 4-cylinder engines, and even in versions similar to a Willys station wagon with a CJ-3B front end, like this J11 model. Like Mahindra in India, on its later models Mitsubishi added a short diagonal skirt at the front edge of the front fenders. But unlike Mahindra, the Japanese firm never adopted the CJ-5 "round fender" body style. 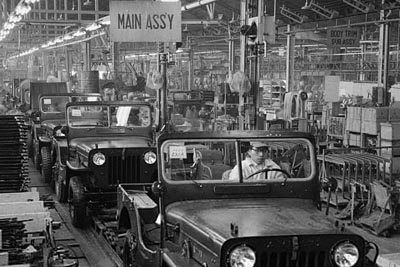 Mitsubishi Motors announced on 4 June 1998 that it would stop production of Jeep models, 45 years after their commercial debut in Japan. The Tokyo-based automaker would make its last Jeep in August, said a company spokesman, explaining the decision was made because the vehicles don't meet new environmental and safety standards. Mitsubishi sold about 200,000 Jeeps in Japan -- many to the government -- since it was first granted a licence to make them in 1953.

After initially assembling some CJ-3As known as the "J1" (6-volt) and "J2" (12-volt) for the Japanese government, Mitsubishi undertook to manufacture a CJ-3B using largely Japanese-made parts. 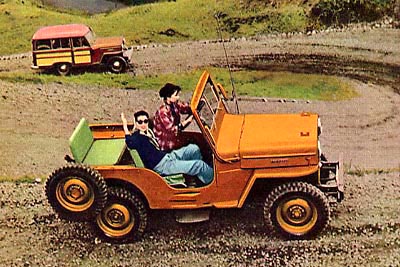 The original CJ3B-J3 was built from 1953 into the 1970's, alongside the CJ3B-J4 Military Jeeps used by both the Japanese Army and the U.S. Army. Even the civilian version was often shown in Olive Drab in advertising. See a colorful CJ3B-J3 Brochure scanned by Makoto Hirakawa. 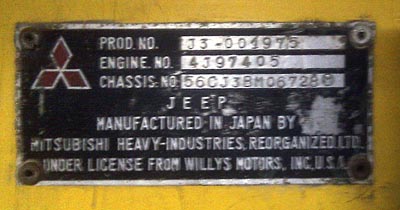 In the mid-1950s Mitsubishi began building versions with medium (87.5 inch) and long (104 inch) wheelbases. In the late 1950s, diesel versions and right-hand drive versions were added to the line.

See a Mitsubishi J32 fire engine on the CJ-3B Fire Engines Around the World page.

Slightly larger engines were added in the 1970's -- the J54 and military J54A used a 2.7L diesel engine, the J56 had a 2.4L gasoline engine, and the J57 a 2.6L. There were also medium and long-wheelbase models available with all of these engines. From the mid-1980's until Jeep production was ended in 1998, only diesel engines were available in the J50 series. Like the Mahindras which were built in India into the 2000s, the Mitsubishi Jeeps had a lot of appeal to people wanting a new vehicle with the no-nonsense look of a flat-fender Jeep. 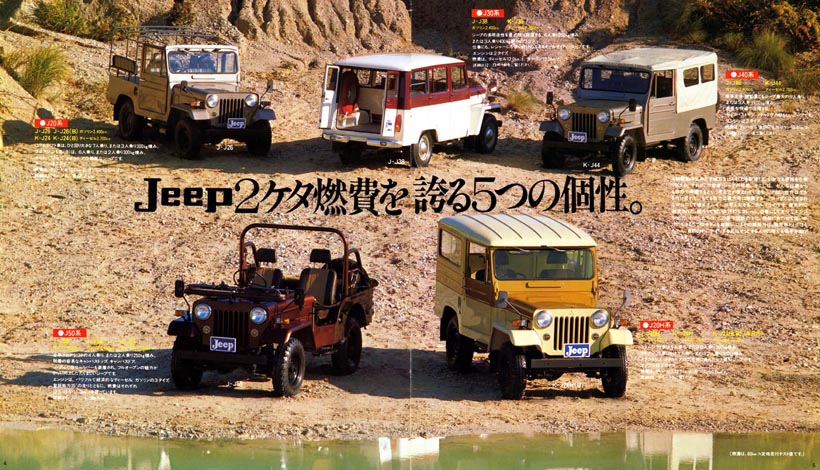 I compiled the chart below from several sources, but it is not complete and may have some errors. Any corrections or additions are welcome via my e-mail address at the bottom of the page.

Notes: an asterisk * indicates Left Hand Drive models. Links in the chart are to photos on CJ3B.info.

Thanks to Mori Ochi, Makoto Hirakawa and 4x4 Magazine in Japan for providing information for this page and chart. -- Derek Redmond