The Colombian tradition of selling coffee and food from mobile Jeep coffee shops (see Colombia Loves Willys on CJ3B.info) has been spreading around the world, and here's a look at the examples I have seen so far. 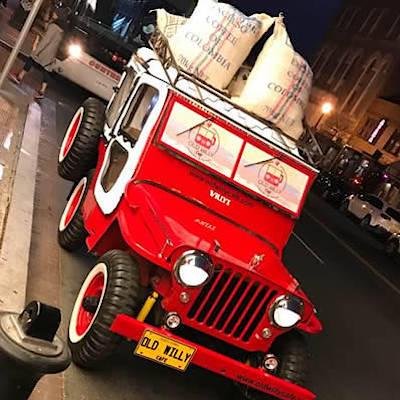 Old Willy Café is a mobile Colombian artisinal coffee and espresso bar in Washington DC. It participates in festivals and markets in the Washington, Maryland and Virginia area, and is available for private and corporate events.

Old Willy is a CJ-2A, a model which was imported to Colombia in the 1940s but is less common there compared to later Willys Jeeps. I don't have any details on the actual background of Old Willy. 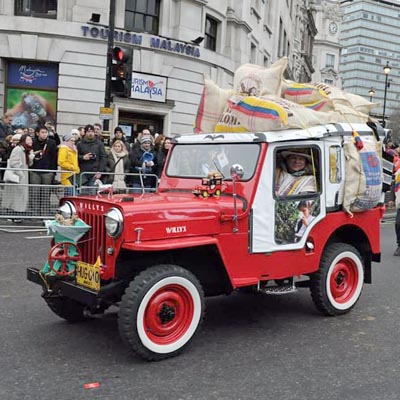 Besides the great name, there are several other cool things about Carlos' operation. First of all, he found that it was going to be too expensive to bring a CJ-3B from Colombia, so he searched in the UK until he found a former Swiss Army Jeep, apparently registered in England since 1961. He then converted it into a perfect replica of a Willys from Colombia. 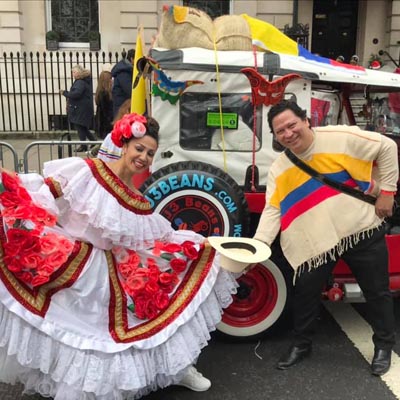 The Jeep was turned into a state-of-the-art coffee truck with the help of an outfit called The Big Coffee.

But what Carlos can provide goes beyond great coffee, to include offering "Colombian Experience" event packages in London, with live music, salsa dancing and Colombian food. He comes originally from Cali, the third largest city in Colombia, known for its salsa music and party atmosphere! 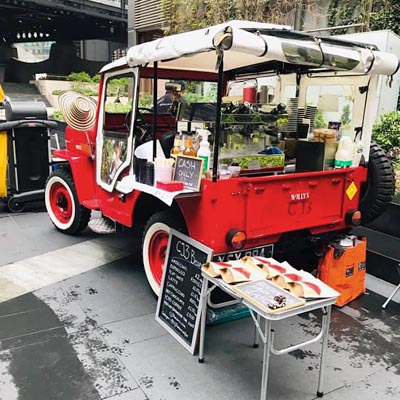 When I caught up with Carlos, he was at Broadgate Plaza in central London, but he likes to move around. He not only sells cappuccinos and espressos brewed in his Fracino machine, but also multiple varieties of the Colombian beans themselves. 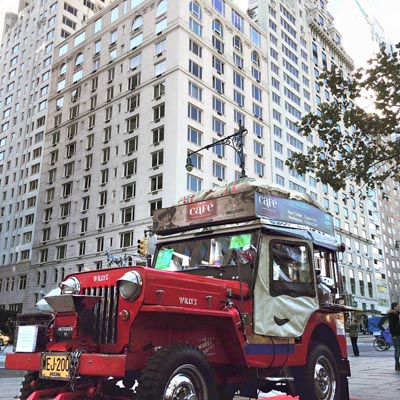 A Camperito del Café, the kind of coffee shop on wheels found in Colombia, where "Willys" and "Café" are so closely connected (see Colombia Loves Willys), is also on the street in New York.

It's a real Colombian Willys, right down to the horse on the hood, coffee beans on the roof, and stencils under the fenders. And special equipment? Of course there's a coffee grinder on the front bumper! 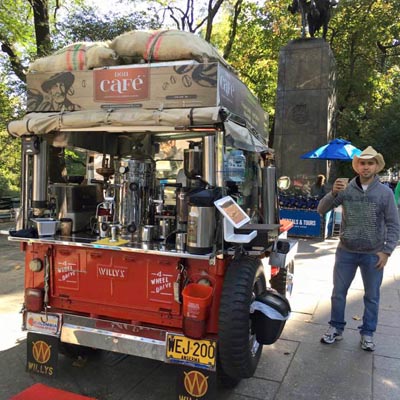 Turns out Don Café has been attending special events in New York since early 2014, and in fall 2015 they got a regular spot on Central Park South near Columbia Circle (right). The Willys has a Colombian license plate, and normally travels around the city by trailer.

There is a great little video (5MB QuickTime movie) which gives you good look at the Willys and the coffee, which has been getting great reviews. 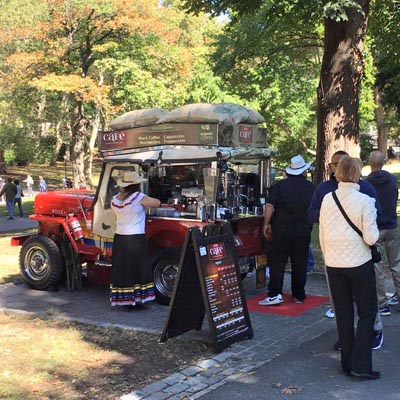 Like the Jeep, the organic Colombian coffee is the real deal, with professional baristas roasting the beans and using a classic Astoria espresso machine.

When the Jeep is packed up at night (100K JPEG) it looks like any Java Jeep in Colombia. 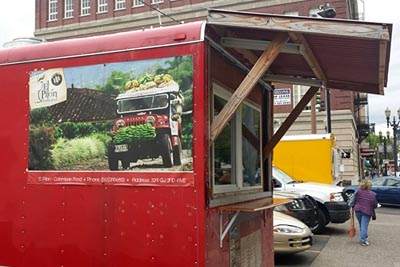 Curt sent this photo with the comment, "Thought this was cool -- I will buy what this guy is selling. A food cart in Portland, Oregon."

What caught Curt's eye of course was the big sign on the side of the trailer, with a beautiful photo of a Willys CJ-3B in Colombia. So I decided to find out the story behind the sign, and the business named El Pilón. 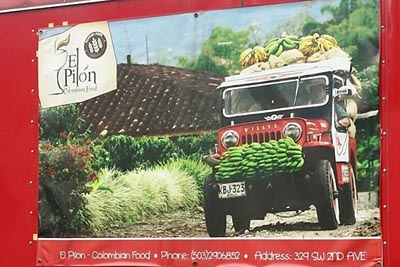 My first thought was that the Willys in the photo was loaded with bananas, but I realized that in fact they are plantains, slightly less sweet than bananas. Plantains are used in El Pilón's signature dish, patacones (pa-ta-con.) The cart also serves other traditional Colombian food such as empanadas, arepas and pan de yuca.

I thought since we've promoted The 3-B's Café in Illinois, and Nabob Coffee for their Willys commercial, we should let people know about El Pilón. 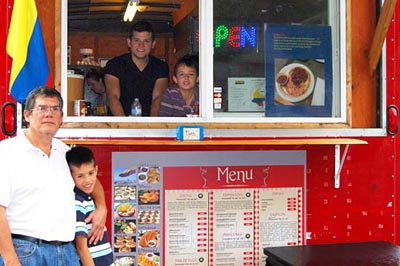 When owner Fernando Montagut came to the U.S. he had years of experience in architectural design, but couldn't find employment with his Colombian diploma. So Fernando pursued his passion for cooking, and launched a food stand business. He secured a downtown food cart location in 2013, and with the help of a loan from Kiva.org was able to upgrade his equipment and marketing materials.

Fernando hopes one day to open a Colombian restaurant in Portland. 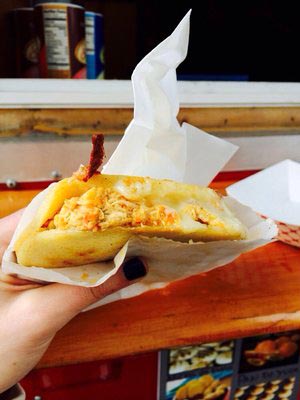 A rave review at Food Carts Portland says, "As an eater and street food fan, I've eaten at more than 500 different carts throughout the city. There are few who truly surprise me, force me to stop and find a place to sit down, maybe a curb or park bench. El Pilon Colombian Food did just that. They served a dish that gave me pause, a pause to enjoy every bite.

"Patacones are traditional side dishes served in South America and Colombia. Fernando uses plantains to create a bowl that is fried twice before the goodies are added. Imagine a flower with cheese at the bottom topped with shredded beef and a thin slice of red pepper. For one, a beautiful presentation and two, it tastes sublime. The plantain is semi-sweet, so with the savory meat and cheese, he creates a memorable combination. Truly one of the most unique dishes I have found in a while." 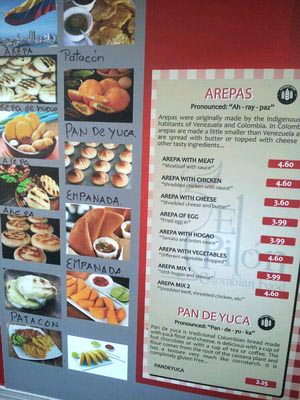 Twenty reviewers at Yelp gave El Pilón an average of 4.5 stars out of 5 during its first year of operation. This photo shows part of the menu, which describes each item and its place in Colombian culture.

Marcela commented, "Absolutely phenomenal Colombian food! I got several recommendations to come check this food truck out in downtown Portland and now I know why! Empanadas are to die for and to top it off the owners, a Colombian couple, are so friendly and helpful!" 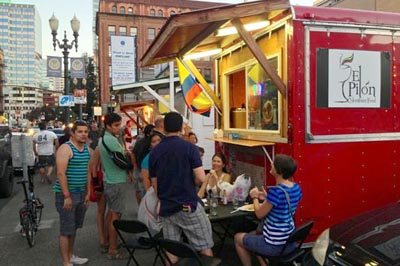 Here's a look at customers enjoying the food in the early evening.

Enrique, who took this photo, said: "As a Colombian I can say that this food cart is fantastic. Very authentic food, excellent service and great prices. I loooooved the Patacon con carne (green plantain with beef on top). If you go to this place, you better try the Salpicon (fruit cocktail) along with your food. Highly recommended." 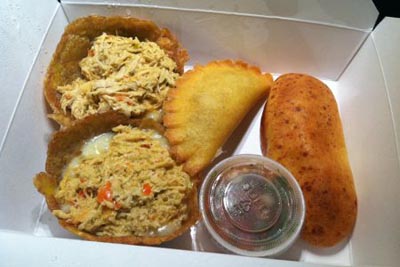 As if those reviews weren't enough, I discovered that El Pilón was included in an online list of Top 5 Gluten-Free Globetrotter Meals Across the Globe (So Far). The Top 5 as rated by Erin Smith's "Gluten-Free Globetrotter" blog, also incuded restaurants in Rome and Prague, high tea in Edinburgh, and a Thai cooking school.

Eating gluten-free is an important health factor for many people, and El Pilón's entire menu uses corn rather than wheat flour.
For those of us who are looking forward to visiting Colombia and taking in a Yipao Willys festival, these spots might be a good temporary substitute. Anybody found other examples?

Thanks to Curt, Natasha, Enrique, Erin, Laina and Kiva for the Portland photos. -- Derek Redmond