Ed. note: When Rich sent the story of his Jeep, and included this photo taken outside The 3-B's Café in Rockford, I knew we had to give this place a plug!   In fact, we should have a gathering of CJ-3Bs at the Café!   The old location seen here was damaged by fire in 2013, and the business reopened at 6901 N. 2nd St. in Machesney Park, just north of Rockford. 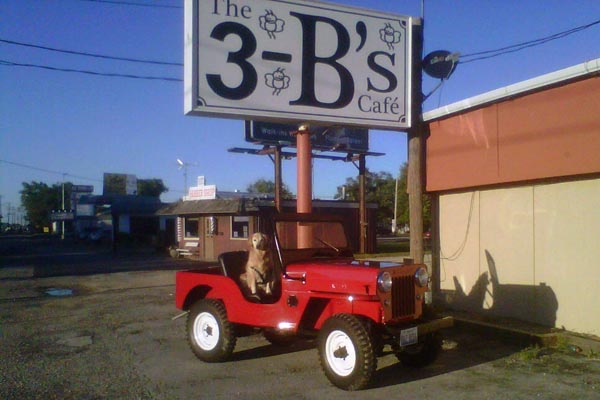 I understand it's a classic little diner, serving great breakfast and lunch. Click on the front cover of the menu, below, to see the 2014 menu. 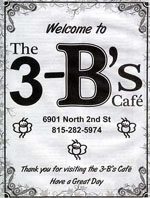 In 1991 a Jeep fan named Fred purchased a rusted white CJ-3B from the York, Pennsylvania Airport, where it was used as a tug and fire vehicle until the engine seized. It had a replacement tub when he bought it, and he told me later that during the subsequent body work blue paint was found. 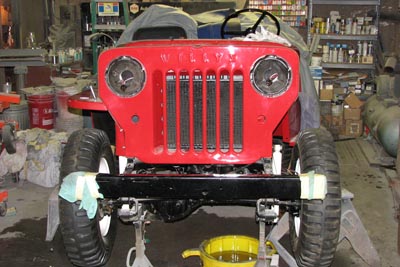 He put four years into disassembly, removing rust, gathering parts, etc. He engaged an excellent hot rod body guy and fed serious dollars into bringing the tin to bondo-free beauty. He wanted to go with blue paint but got outvoted by his wife so red prevailed. But with the Jeep shiny but still disassembled, and its rebuilt engine on a stand, children and business and motorcycles captured Fred's attention, and dust gathered on his project for the next 16 years.

I saw my first high hood Jeep at the Mason Dixon Willys Show in Westminster MD in October 2009, and launched a search for one of my own, that spanned the internet and included nationwide inquiries. In April 2011 Fred Craigslisted his project. He lived only 10 miles from my house in Pennsylvania at the time, so I checked it out and snapped it up. My original plan was to get a worn but functioning "B", but flexibility was appropriate. 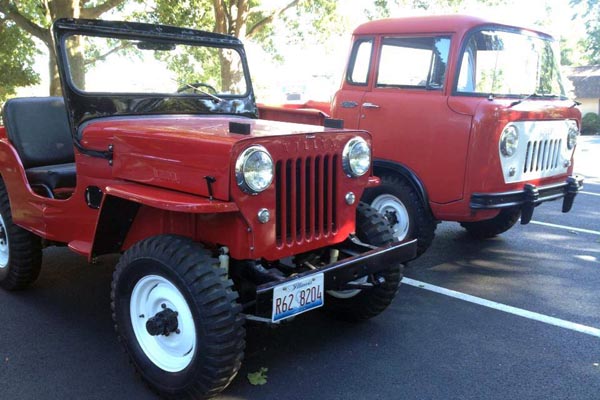 I dawdled through OEM brakes and suspension, parts reconditioning, etc., but in December 2012 I accepted a job transfer and, rather than ship pieces, found a restorer nearby and turned it over to a pro (Tom Brooks of Brooks Auto Restoration, now retired) in Lancaster PA, while I moved to Illinois.

Just as it was finished, Bill from Lime Street Carriage in Lancaster stopped by in his FC for a look (left). 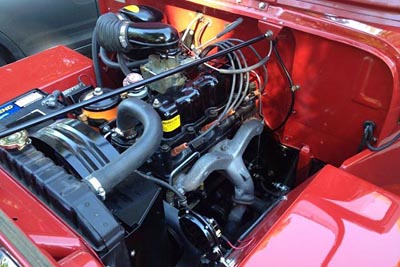 Professionals had already rebuilt the engine for Fred (it was magnafluxed, and one cylinder re-sleeved), also the transmission and transfer case. Only a few components (carburetor, generator, starter) weren't fully reconditioned. Maniacal effort had been applied to the body; the original front clip and hood, and the abused replacement tub, were hammered and welded to very high standards. There's no bondo under the three coats of primer and bright red paint.

They were frustrated that the tailgate had no WILLYS stamp so they found a mangled gate, cut out the stamping and patched it in. You can't find a seam with a microscope. By 1962 Kaiser was phasing out the stamping of parts, so the restoration duo perhaps unwittingly defaced an OEM gate, but it looks great! 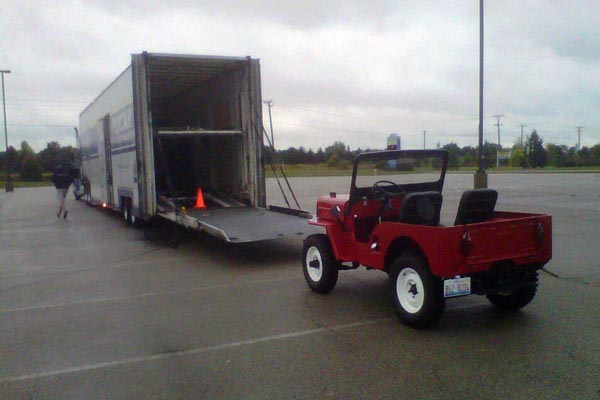 It took 5 months longer and $2K more expense than initially estimated but it "hit the road" for the first time in early September. After supplying rides/drives to friends back in Pennsylvania ­- including Fred ­- it was loaded onto a truck and shipped out here to the Rockford IL area. My first drive was from the truck (left) to my home on Sunday, September 15, 2013. 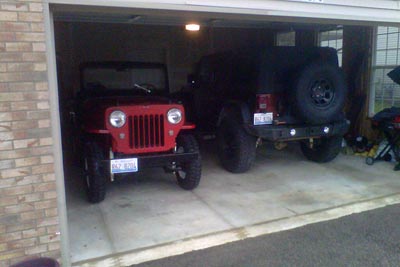 The permanently topless vehicle resides in my garage and is used only on sunny days and clear nights with dry roads. I have a newer and enclosed Jeep for slinging mud and snow. Again, thank you to CJ3B.info and Bulletin Board. They were immensely helpful. I am certain there would have been another "Project for Sale" had it not been for CJ3B.info. -- Rich Meyer

Thanks to Rich for the story and photos. Looking forward to meeting him at The 3-B's Café! -- Derek Redmond