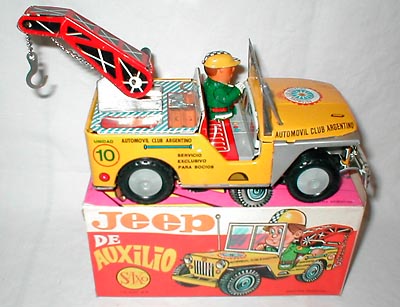 South America has a strong Jeep tradition, with the vehicles having been built under licence in several countries there (see Jeeps Around the World). So it's not surprising that lots of toys based on them have appeared in that market. This page is by no means a complete listing, but does show some typical examples.

This tinplate friction-drive toy, about 8 inches (20 cm) long, was made by Saxo of Argentina in the 1970's. The wrecker has unique and detailed lithography and carries the name "Automovil Club Argentino." There were also military police (50K JPEG) and racing versions. 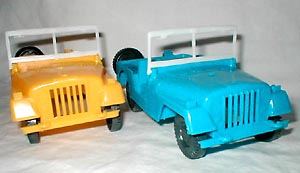 Also from Argentina is this plastic CJ-5 which appears to have been designed without too much aid from a measuring tape. The prototype CJ-5 was built by IKA (Industrias Kaiser Argentina) starting in 1958.

EPLAXA, another Argentinian company, also had problems with the proportions of their plastic flatfender (30K JPEG). 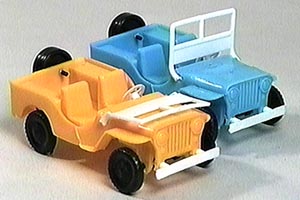 These colors are obviously popular in South America. This plastic CJ-2A is a notch higher in quality, and is a Brazilian product. 4 inches (10 cm) long, it has no identifying marks.

Some other examples from Brazil and other countries in South America:

See more about pottery Jeeps, which are a popular souvenir in many Latin American countries, in Yipao: The Willys Festivals of Colombia. A Jeep model that stands out in quality among South American toys is the 1/43 diecast series from Minibrindes of Brazil, last made probably in the early 1980's. It has the distinctive squared-off rear wheel opening of the Brazilian CJ-5 manufactured since 1967 by Ford. There are a number of versions, including this Coca-Cola paint scheme, military, Red Cross (40K JPEG), United Nations (40K JPEG), and a rare chrome version made by Jue, a predecessor of Minibrindes. 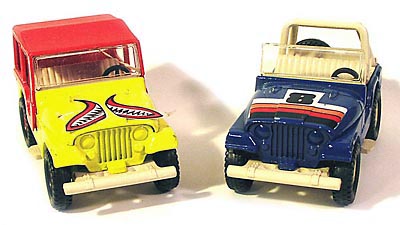 Several variations of the Corgi 1/43 CJ-5 diecast were also produced in Brazil, by Kiko. Although well-made, they don't have the unique Brazilian design of the Minibrindes. See a side view photo (50K JPEG).

And Corgi wasn't the only outside influence; see also a small Jeep made in the 1980's in Brazil, based on the "A-Team" TV show (30K JPEG).

Willys Jeep Station Wagons have always been popular in South America, and I think it's surprising that I haven't run across a model of the distinctive "Rural" wagon built in Brasil from 1960-77. But this set of plastic station wagons represents the Estancieras built by IKA in Argentina. 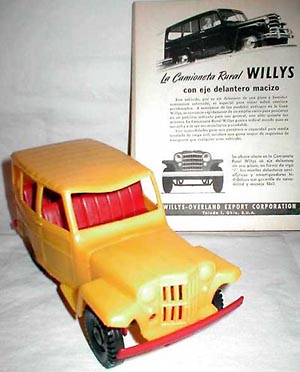 Lisandro Chlaula has these Estancieras, the Baqueano Willys pickups (20K JPEG) and some of the other Argentinian toys above available for sale. He took this photo with an advertisement from the Spanish-language edition of Reader's Digest. See also his photo of the red station wagon (35K JPEG).

See also a Diecast Willys CJ-3B from Colombia, and a 2016 Diecast Jeep Colección for Latin America.