Corgi Toys were introduced by British toy company Mettoy Playcraft Ltd. in 1956, to compete with Meccano Limited's Dinky Toys in the larger-scale (typically 1:43) diecast toys market. The models featured details not found on Dinky Toys, including interiors, spring suspensions, and windows. The factory was in Swansea, Wales, and the Corgi name came from the small Welsh cattle-herding dog. 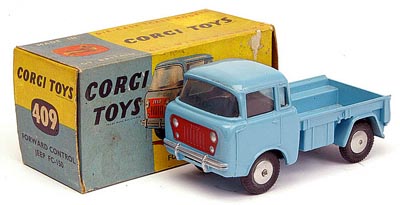 Another difference from Dinky Toys was that for many years the only Jeep in the Corgi catalogue was the FC-150 Forward Control. There were several variations of the 1:43-scale short-wheelbase truck, beginning in 1959. Corgi #409 was a basic pickup in light blue (see the underside, 130K JPEG). This was followed by #470 in several colors with a removable rear cover (200K JPEG), cab interior and suspension. 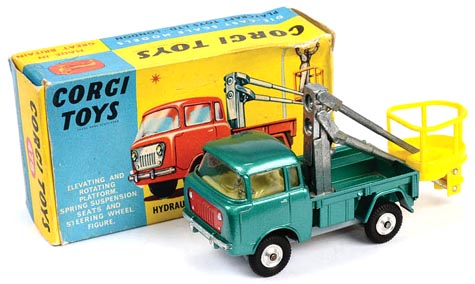 In 1961 Corgi made the 91mm-long (about 3-1/2 inches) FC part of Gift Set #14, a red "hydraulic tower wagon" with an elevating platform, an electrician to stand on it and a street light to be repaired. It is still shown on a 1965 catalogue page (80K JPEG) but that year it was replaced by #478 in green, lacking the street lamp but with interior and suspension added.

Thanks to J-C Guerry for the catalogues, and Vectis Auctions for the photos. 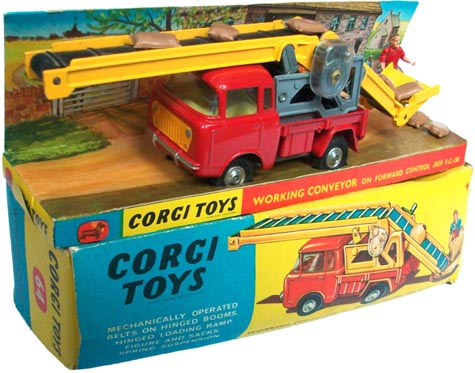 The year 1965 was a big one for Corgi, with new models including their most successful and well-remembered toy, the James Bond 007 Aston Martin with ejector seat. Another classic that year was Gift Set #64, a red Jeep with a bizarre two-section conveyor loader operated by a crank. It remained in production until 1969.


Chief designer for these and all other Corgi Toys from 1956 until 1983 was Marcel van Cleemput, who died in 2013 (see Marcel van Cleemput in The Telegraph.) He also wrote The Great Book of Corgi which includes a photo of a never-produced prototype (140K JPEG) which was a re-working of a #409 FC-150, but was based on an FC-170 camper used in the 1960-64 "Anglo-African Trans-World Safari" (see an article at eWillys.)

Unfortunately a major fire at the factory and warehouse in 1969 destroyed much of the stock. They were back to full production by 1971, but this setback was undoubtedly a factor in the eventual collapse of the original company in 1983. (The History of Corgi Toys.) 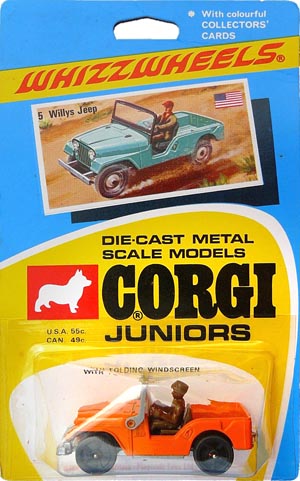 The first Universal Jeep sold by Corgi was in 1968 under the Husky brand name, a smaller-scale (approximately 1:60) green Willys CJ-5. The Corgi name did not appear on Husky #5 (90K JPEG) in 1968, as Husky was their brand for small diecasts at the time, sold primarily through Woolworth's.

In 1970 the #5 Willys Jeep was re-released as a Corgi Junior (left) with Corgi's new "Whizzwheels."

The back of the bubble pack (200K JPEG) had a brief history of the Jeep on the reverse side of the "collectors' card" which could be cut from the packaging. It says, "...the Willys Jeep is a true maid-of-all-work. Properly maintained the Jeep appears to go on forever." 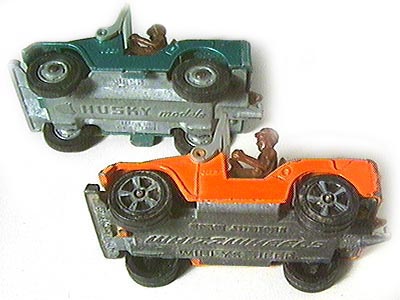 Husky #5 had metal wheels with rubber tires, similar to the original wheels used by Matchbox. The Corgi Junior version had "Whizzwheels" -- plastic wheels on thinner axles, to compete with Matchbox "Superfast," and Mattel "Hot Wheels" which had been introduced in the U.S. the year before.

For a "speed comparison" of the competing brands, see Whizzwheels Hotter Than Hot Wheels on CJ3B.info. 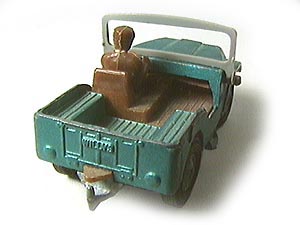 The little CJ-5 had a plastic folding windshield frame and a driver. The tailgate had "WILLYS" stamped on it -- this may be the only Jeep diecast with the WILLYS name on the tailgate. Several colors were issued, including civilian and military (#76) versions, until 1973. 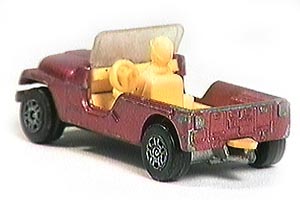 In 1978, a CJ-6 (#12) was introduced. Some examples included a removable hard top (110K JPEG) and a realistic Golden Eagle decal (140K JPEG) on the hood. It was produced until 1981 and was available with and without a driver molded into the driver's seat. 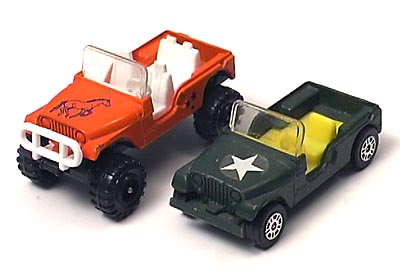 This model was re-released in 1983 as a U.S. Army Jeep, #157 -- a rare model of an M170. It did not have a hard top, and the star on the hood was a clear plastic sticker. This model was later given larger tires (and a plasic base which no longer carried the name "Jeep CJ-6"), just before Corgi was bought by Mattel.

A few variations of the CJ-6 were also sold by Mattel under the Hot Wheels name (see More Hot Wheels Jeeps.) 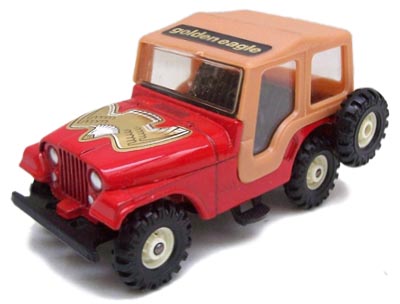 A larger scale (approximately 1:43) Jeep CJ-5 was introduced as the "Golden Eagle Jeep" in 1979. (This is the scale of the original Corgi toys, produced to compete with Dinky Toys.) This CJ-5 (#441) is very well detailed, has a front bench seat and no back seat, and was produced in several colours, including a yellow Renegade (80K JPEG). 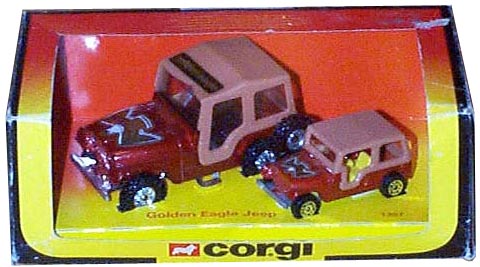 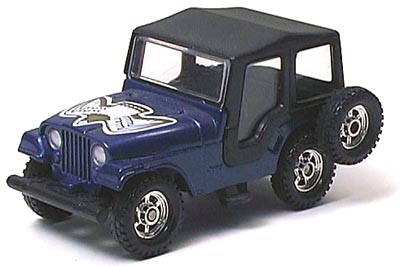 The CJ-5 was re-released in blue paint in 1983 (#448). The Golden Eagle decal was retained despite the color change. The tailgate did carry a prototypical "Jeep" stamping (see a rear view, 50K JPEG). 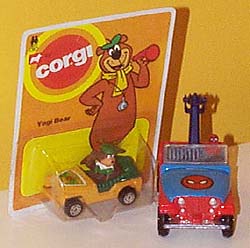 And during 1976-77, as part of their Cubs line of cars, Corgi released a Corgi Cubs Jeep, #501 (24K JPEG). Due to their lack of detail, Corgi Cubs have not acquired collector status.

Thanks to Jarek Skonieczny for his help. -- Derek Redmond