From The CJ-3B Bulletin Board:

Bob Christy: "How in the world do you get the glass back into the windshield frame? I was trying this last night for like two hours!"

Chuck: "Very carefully. Seriously, you sorta gotta shoehorn the thing in. My old Wrangler went through five windshields and it always amazed me how they ran what looked to be masking tape around the edge, shoehorned it in and then got the tape off. Price including glass for the Wrangler was $100. Price including glass for the 3B $85 as of last year."

Stan: "Take it to a professional and have it done. I also tried to do my own and finally had to give up. It's a lot harder than it looks. Spend the money and save yourself some frustration."

Bart McNeil: "I am assuming you are aware of the locking strip inside the weatherstrip. This is from the '56 manual: 'The windshield is mounted in a rubber weatherstrip which in turn mounts in the frame. A rubber locking strip which holds the glass firmly in the frame, is inserted in a molded groove around the rear face of the weatherstrip as shown in figure 312. To remove the glass it is first necessary to remove the locking strip which may be pried out with a screw driver or similar tool. Installation is obvious.' It may be ridiculous to quote this but I had a hardtop, on which I had to fool with the window glass, and at first didn't realize that there was a bead in there which has to be removed. Once the bead is removed it was easy to remove and then install and re-insert the bead (locking strip)." 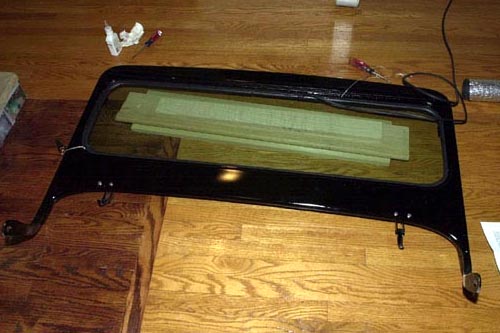 Bob: "I conquered this thing Saturday night. I first put the rubber on the window and then laid it on my dining room floor up on top of some 2x4's. I installed a heavy string, prelubricated with WD-40, into the channel for the frame. After setting the frame over the windshield and lining everything up, I started one end on the frame and then pulled the string, forcing the rubber onto the frame. 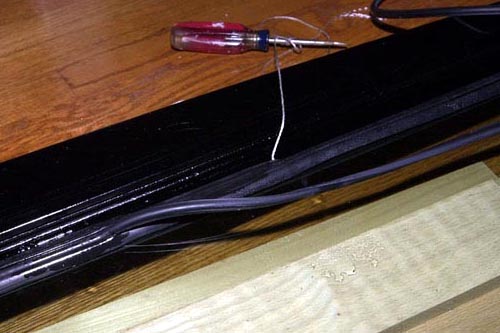 "I did about 1/4 of the window this way and then started installing the locking rubber right behind, using more WD-40 and a dull screwdriver to put it in. Still took about 2 hours."

Chuck: "Wouldn't want to be the one who did repairs on that hardwood floor! Might end up costing a couple of Jeeps to get it refinished."

Bob: "I put the floor in myself and also sanded and finished it myself...it was much easier than putting that windshield in!"

Ernie: "Something that might help you guys with your windshields is to put the rubber into the frame and then the glass into the frame/channel. I was taught that way by a pro when I was 16 and have never done it the other way for this type. Use a little lube and a blunt, rounded screw driver, set the glass in the bottom and start working up the sides. Use some pressure, but never force it or pry on the glass. You may come to spots that feel like it's jammed (upper corners); that means there is a spot somewhere else that is in a bind (glass not fully seated in channel). Find that and things will move along. The string method might be a little safer than a screw driver, just don't pull the string too fast. It should not take more than 15 to 20 min. if the glass is cut right."

Bruce: "Be careful what you use for a lubricant. When I replaced my windshield in 1978, I installed it myself to save a couple of dollars. I think I used WD-40. It was a wrestle, but I got it in. However, a day or two later I got a real suprise when, while driving along, my newly installed windshield popped out and into my passenger's lap. (It then slid off her lap and onto the pavement where it became an old windshield.) I had a professional install the next one and it's still there."

Thanks to all the contributors, and Bob for the photos. -- Derek Redmond