Weak Points in the Flatfender Hood

When I was examining defects in my CJ-3B hood, I realized that the same pattern of problems was found on my CJ-3A hood. A crack at one point would be found at the same point on the other hood. This of course suggests inherent weak points in the CJ hood. One only has to lift the hood to experience some of the problems with hood construction. It is almost impossible to open the hood from the front without causing damage to the hood as the wooden blocks slam against the metal windscreen. I suspect we've all done that. 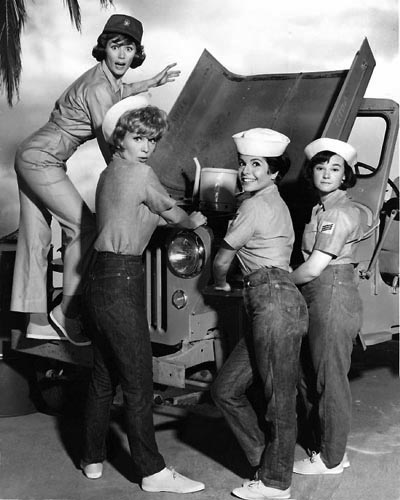 The only way to easily maintain control of the hood is to open it from the side, usually the left front. As the hood is lifted it twists, causing strain throughout. The spot welds at the center flanges take tremendous strain and if there are any stress cracks they will be magnified and grow through the twisting motion of opening and closing the hood.

If the hood is bent or slightly out of adjustment the front bottom edges make contact with the grille, bending slightly until a crack forms at the weak point on the flange. Both my 3B and 3A have stress cracks (50K JPEG) about three inches back from the front edge of the hood on both sides. 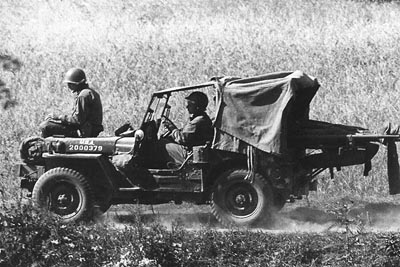 If the hood is leaned on, stepped on, or sat upon, it will be under strain which will eventually break both the center flanges and allow the hood to take on a huge "oil can dent." The break will grow and spread on the hood surface with cracks on both sides of the center being equal in length.

This photo shows an MB used as an ambulance during the Korean War. Photo from Stig Edqvist's The Jeep in Sweden. 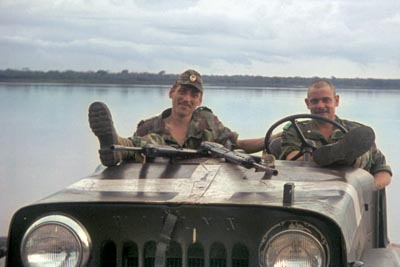 The resuts of that kind of treatment are seen on this M606 of the Congolese Army's 11th Commando, in 1965. Photo from Military Jeeps in the Congo: Part 10 courtesy of J-P Sonck. 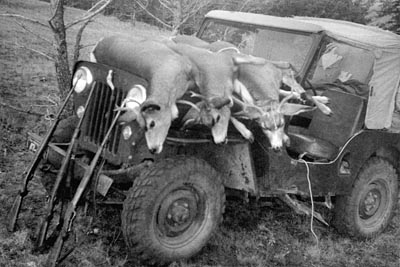 Many flatfender Jeeps used at hunting camps have transported hundreds of pounds of game on their hoods. Photo from the collection of Leif Hellström. 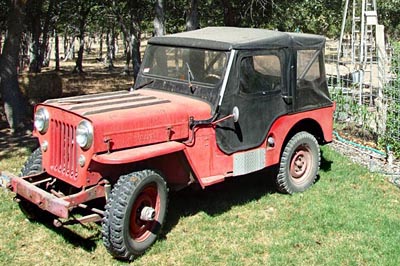 Sometimes the hood has been reinforced to help it serve that purpose. Photo courtesy of Curtis Hickman.


Given that the hood is always being twisted and flexed, any weak point in a flange, for instance, will be subject to a stress crack which will continue to grow. The crack in the center of my hood just about 2 inches back from the front is another example of a stress crack at weak points in the flanges. The rough closing of the hood probably caused this crack. On both my hoods the twisting is causing the spot welds on the center flanges to break loose and cause further cracking.

It seems nothing is immune from the effect of hood twist; on both my 3A and 3B the piano hinge is broken in the same place. Even the thick hinge metal has broken on the last solid area from the bolt hole to the end.

The diagram below shows the problems on my 3B hood. My 3A hood shares most of the same problems:

Ben Page once posted on the "Classic Jeep Mailing List" this description of how to deal with an oil can dent: "'Shrinking' an 'oil can dent' is done with an oxy, and cold water on a rag. It's a bit of an art. You use a small 12 tip and you need to know where to heat a very small portion (about 1/2 an inch in diameter) on the metal. When it's red hot (cherry) you rub the soaking wet cloth around the heated bead in the direction that you wish it to 'shrink'. The process is repeated in various different spots of the 'oil can' to tighten the metal or 'shrink' it. As an aside, if you were able to find a well trained panel repairer who had done a certified apprenticeship you may find that he knows how to 'shrink'. It is not something you are able to convey to someone by words alone. It is an art that has to be learnt with a real 'hands on' application. Hope I've helped a little."

Colin Blair elaborated: "This is how I do it (correct or not it seems to work). I usually start shrinking the dent from the outer edges and work towards the center. I heat an area the size of a quarter to cherry red then take my regular hammer and dolly and hammer it back. heating a spot to cherry will cause the metal to rise up. I hammer back in a pattern (only four or five blows) around the spot then the last stroke hammers the center of the spot. After I finish hammering, I take a damp cloth and cool the metal. If you do this, you can actually watch the metal shrink. This method will shrink the metal and remove the oil can dent. On my rear truck fenders, I had an oil can on the top of the fender and it took somehwere near a dozen spots to get the metal to shrink and remove the dent."

Thanks to Rus Curtis for saving those postings. 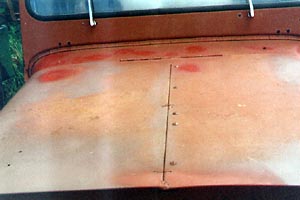 The center flanges on my hood are now reinforced by a piece of iron L-channel screwed to the underside to counteract the flexing of the oil can dent and keep the central crack from growing. From the topside, screw heads are seen which secure the L-channel to the center of the hood. The broken flanges are below the horizontal crack in the center of the hood. 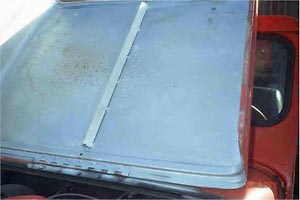 Larry Ford's hood shows a similar approach to the broken flanges, this time welding on an L-beam which covers the flanges and prevents flexing. The only suitable repair seems to be to weld all of the cracks, breaks and broken spot welds back together. It won't cure a badly designed hood but it will delay further deterioration for maybe the next twenty-five years. 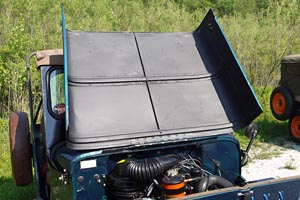 Bob Christy is trying to head off the problem on his 1953 CJ-3B by reinforcing the hood with a second piece of hat channel, salvaged from another hood, welded across the center. 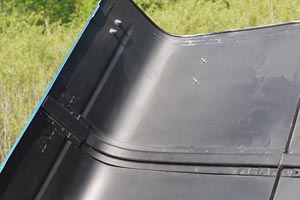 The added piece of hat channel has to be shortened slightly by cutting in the center. Bob has also welded in reinforcement plates at the front corners. 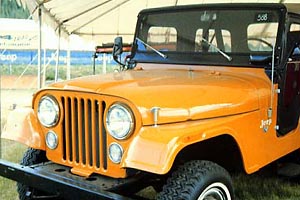 It is interesting that the Jeep hood remained virtually the same for flatfenders from 1942 through the CJ-3B. Most of the problems were then solved with the design of the M38A1/CJ-5 hood, which is much more rigid and not subject to the damaging effects of twist. Its single-piece stamping eliminates the problem of the two-piece hood. Its complex curves throughout the sides and front serve to stress-harden the sheet metal and form a very rigid structure. The center hump lends strength to the expanse of more or less flat sheet metal on top, reducing the possibility of an oil can dent, and there are sections of channel for support under the front and rear.

The design of the M38A1/CJ-5 hood is as much about strengthening as it is about streamlining its military and civilian predecessors. Virtually all of the problems with the earlier military and CJ hoods have been addressed and corrected. The interesting thing about the redesign is that the hood is closer to the original Willys Quad experiment than the WW2 and subsequent civilian designs.

Of course there were reasons for the simple yet weak early hood. Ease of manufacture, repair, and replacement in wartime were some, and in fact the hoods served pretty well, considering.

Thanks to Leif Hellström, Curtis Hickman, Larry Ford and Jim Allen for photos, and Bart for his observations. Also Federico Cavedo for the Broadside photo. -- Derek Redmond