Despite a few attempts over the years by Jeep designers to launch a sports car (see The Urge to Build Sports Cars on CJ3B.info) the closest they ever got was the 1948-51 two-wheel-drive Jeepster VJ convertible. It sold just 10,000 units in its first year, and word got around about how underpowered the Go-Devil 4-cylinder under the hood was for a "sports car." The Lightning 6 was added as an option to the new VJ-3 model in July 1949, but it was too late, and sales tanked at about 3,400 for 1949.(1) 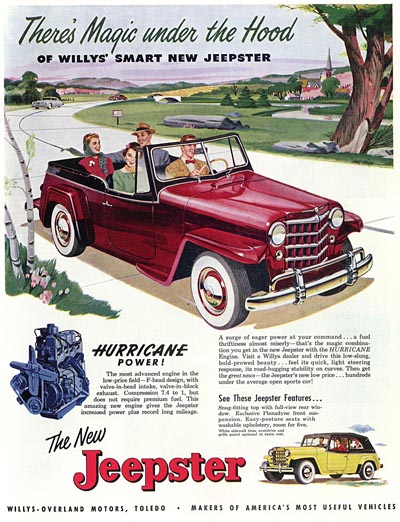 In April 1950 the updated 473-VJ version with the V-shaped grille became one of the first Jeeps to get the new Hurricane F-head engine. It fit in easily since Brooks Stevens' classy design already included a high hood. The F-head provided improved acceleration, and it also improved sales to nearly 6,000 for 1950, including 1,700 of the optional 673-VJ version with the short-lived Hurricane 6. That wasn't enough to save the Jeepster however, as production was ended and remaining 1950 models were sold in 1951.

"There's Magic under the Hood," said this 1950 ad. "A surge of eager power at your command... a fuel thriftiness almost miserly -- that's the magic combination you get in the new Jeepster with the HURRICANE engine." (But it wasn't enough magic to make the Jeepster's image problem disappear.)

The ad shows the Luzon Red paint which had been a Willys color since the CJ-2A. It also shows the new Nassau Cream yellow which became popular on the Jeepster. The windshield and top border are Midnight Cloud Black.

Since the 473-VJ shares the Hurricane engine with the CJ-3B, and the Jeepster was in production during most of the 3B's long development process, I think it's fair to call it a "Sibling of the CJ-3B". -- Derek Redmond 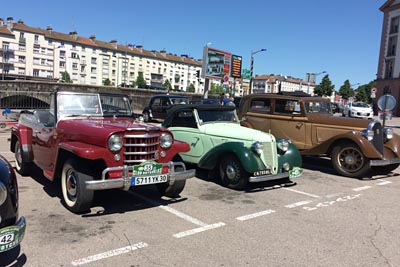 The Luzon Red 1950 473-VJ seen on the left was originally yellow, and was repainted when it was restored in the 1990s. It's now owned by Jean-Francois (Jeff) Lavie in Belfort, France. It's part of Jeff's substantial Jeep collection (which also includes his rally-prepared Rover V8-Powered CJ-3B.)

There aren't a lot of Jeep shows in France, so Jeff often takes the Jeepster to Hotchkiss events, like this Hotchkiss Club National Rally in May 2017. (The green saloon is a rare 1938 Amilcar Compound with front wheel drive and aluminum unibody construction; it did not resume production after the war. The brown sedan is a mid-1930s Hotchkiss AM80 with a 3-liter overhead-valve six.)


A Drive in the Jeepster 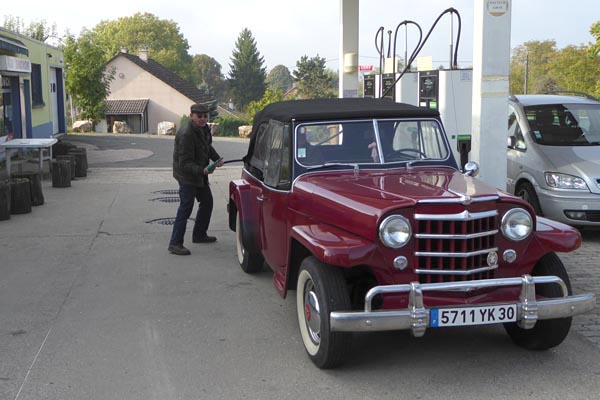 Jeff Lavie offered to take me and Roseanna for a spin, from Belfort up into the Vosges Mountains to the north. It was now October, so we had the top up. The inconvenient snap-on plastic side curtains were not a big selling point back in the day, but Jeff's were new in the 1990s, and provided a great view. 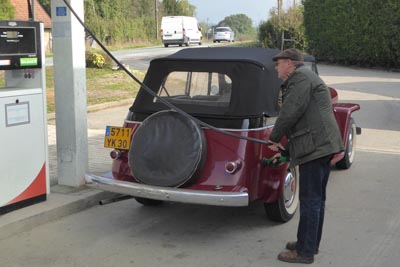 Belfort is in northeast France, near the border with Germany and Switzerland. It's known for the "Belfort Gap" through the mountains, which has been an invasion route since before Julius Caesar moved his troops through in 58 BC.

The most recent military advance through the Belfort Gap was that of the French I Corps in November 1944. The retreating German army held off the French First Army outside the city of Belfort until French commandos made a successful night attack.(2) 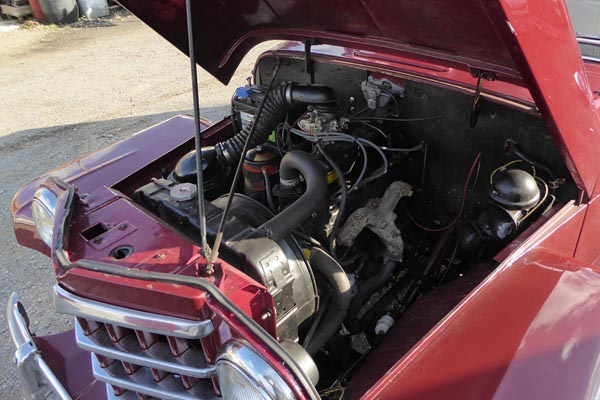 We took a peek at the 473-VJ's Hurricane, which wasn't at all crowded, in an engine compartment largely based on the front end of the Jeep Station Wagon. 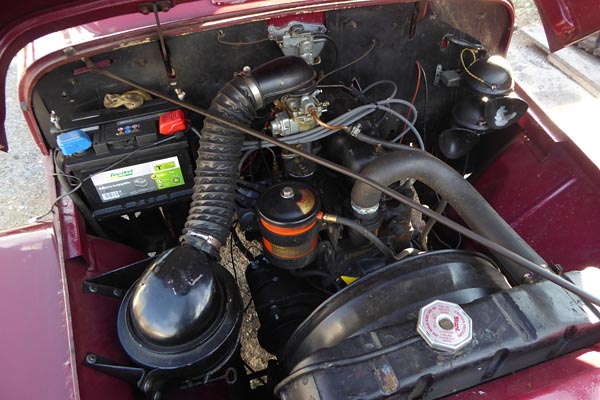 The F-head looked familiar except that the air cleaner and battery had traded places compared to what we're used to in the CJ-3B.

Jeff ordered and installed a Dynator (110K JPEG) built in the UK.(3) It's a modern alternator fitted into a 12V generator look-alike body -- pricey but reliable. 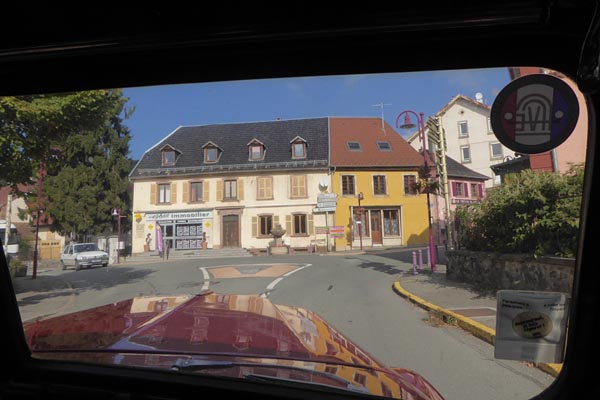 We headed from Belfort into the mountains, through the village of Rougemont-le-Château which was briefly industrialized in the 19th century with water power from the river, but is now quiet again. 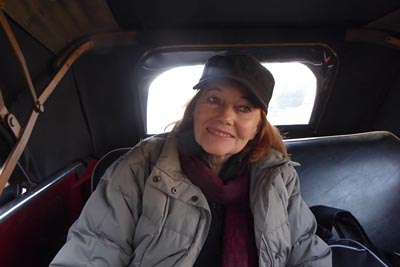 Roseanna has loads of room in the back, although the rear seat is maybe not as generous as it looks in the ad at the top of this page. 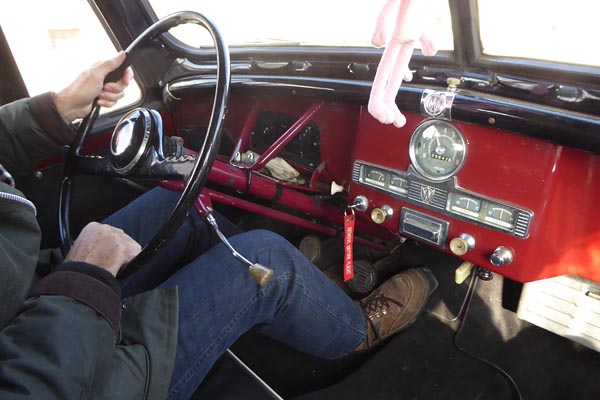 I'm too scared to try getting used to the column shift on the mountain roads. Luckily Jeff is an expert.

The dashboard of the 1950 Jeepster has the stylish new instrument panel which replaced the earlier rectangular panel. 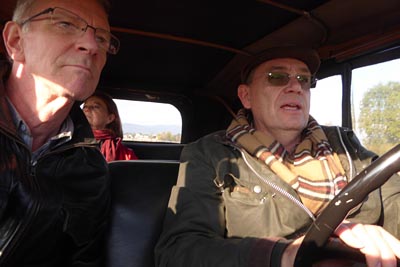 While Roseanna and I enjoy the scenery, Jeff fills us in on some of the details of local color, as well as his current and future Willys restoration projects. The column shift keeps reminding him of his early CJ-2A which is nearly finished. 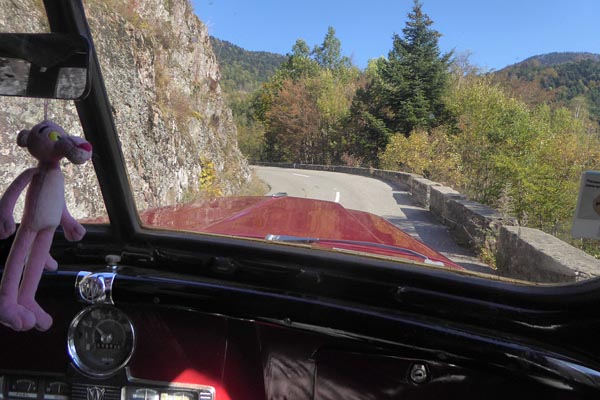 The rounded summits of the Vosges are called ballons in French (meaning "balloons.") We're following a winding road up the Ballon d'Alsace which reaches an altitude of 1,247 m (4,091 feet.) 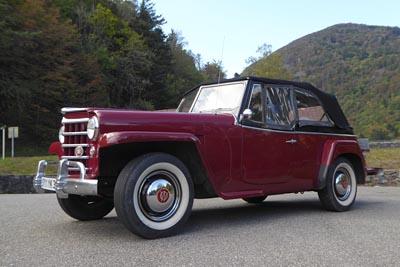 On the front grille is a Club Hotchkiss badge (130K JPEG) with the crossed cannons logo of Hotchkiss, which was established as an armaments firm by American gunsmith Benjamin Hotchkiss in 1867. His timing was good, as he got a lot of business from the Franco-Prussian War, which started in 1870. A major battle was the unsuccessful siege of Belfort by the German armies in the winter of 1870-71.(4) 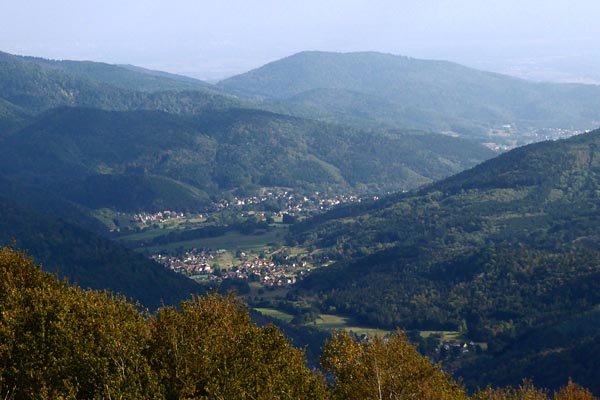 Here's the view south from the top of Ballon d'Alsace. 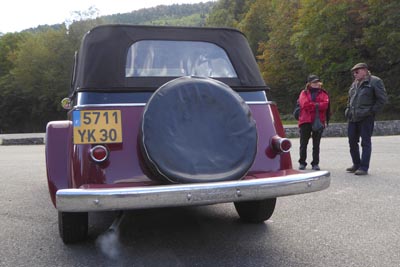 Brooks Stevens did a great job of creating a sporty look for the Jeepster, out of mainly flat panels and many pre-exisitng components. 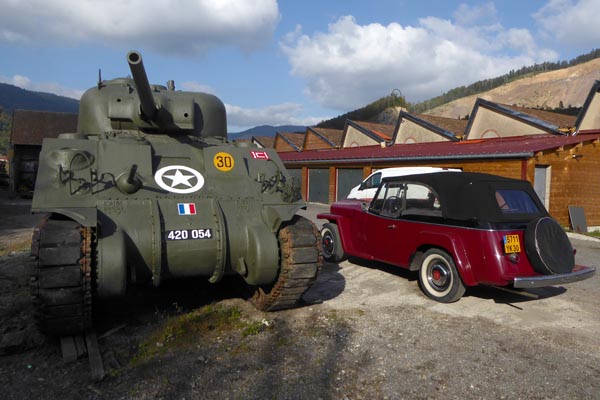 Coming out of the mountains on the way back, Jeff pulls off the road, drives behind an old factory building, and parks next to a restored M4 Sherman tank! See also a rear view (270K JPEG). 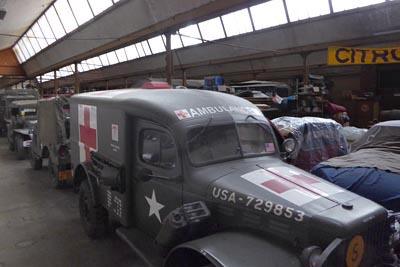 We go inside the building, and find dozens of World War II vehicles, some fully restored like this Dodge WC54 ambulance. Total production of this big 3/4-ton 4x4 truck in four years surpassed the Jeepster: 22,857 were built from 1942-45. (But both pale compared to the 49,000 Sherman tanks produced during the war.) (5) 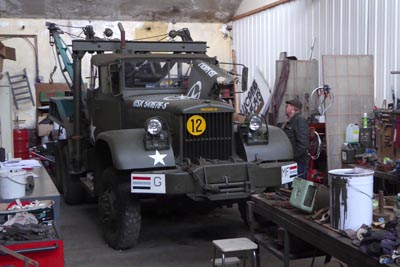 Almost finished in the back shop is a Diamond-T 969A 4-ton 6x6 wrecker!

Want to take a spin in this one? Here's the instructions (80K JPEG). 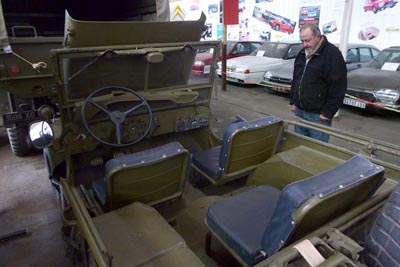 You can tell from the look on the owner's face, that he loves these old machines, left in France after the war. But you can also see in the background, part of his huge collection of Citroëns, designed and built in France. 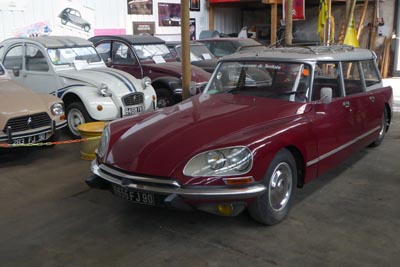 I thought this late-60s Citroën DS station wagon would look nice in a driveway next to the Jeepster. See also a rear view (220K JPEG) with the 2CVs in the background.

In 1999, the Citroën DS placed third in the "Car of the Century" award for most influential car of the 20th century: 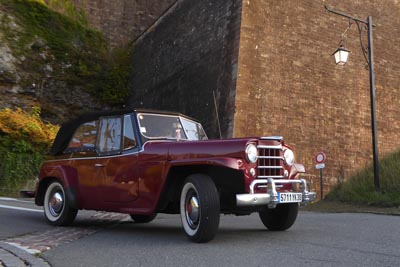 Back in Belfort, Jeff plunged the 473-VJ into rush hour traffic, and we drove up to the citadel which dominates the center of the city. 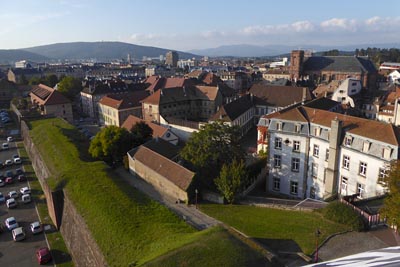 Our view of the old city from the citadel is similar to the photo taken by Adolph Braun in 1871, after the lifting of the siege (130K JPEG) by the German army. 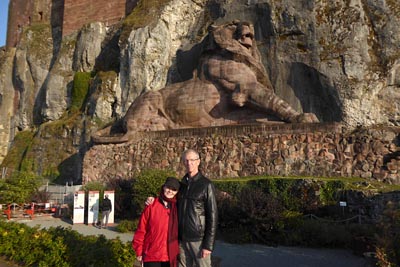 Jeff took a photo of me and Roseanna at the citadel in the late afternoon sun, with the massive "Lion of Belfort", which celebrates the successful resistance against the siege. It's the second most famous sculpture by Frédéric Bartholdi, who completed it in 1880, not long before his Statue of Liberty for New York Harbor, which he titled La Liberté éclairant le monde ("Liberty Enlightening the World").(7) 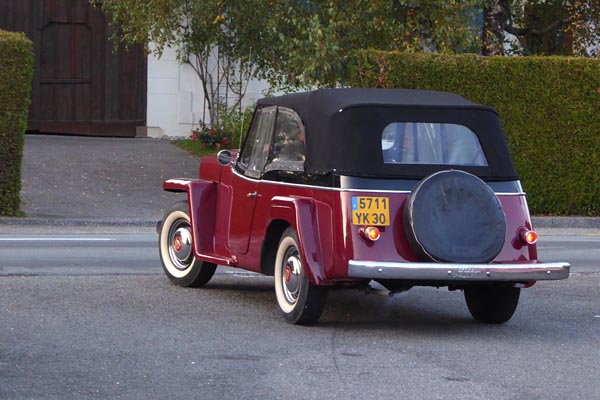 It's hard to think of a better vehicle than the Hurricane-powered 1950 Jeepster for a scenic, historic mountain drive. Thanks to Jeff for the beautiful tour. 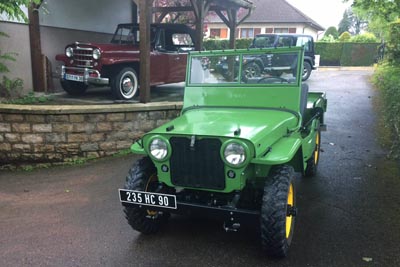 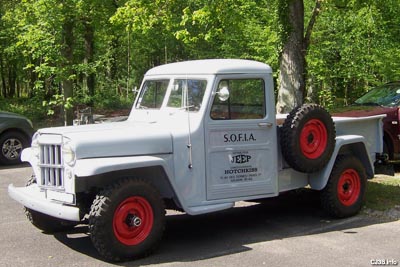 An earlier project is a 1954 6-226 which he restored as a service/demonstrator truck lettered for SOFIA (Société Financière Industrie et Automobile), the French importer of Jeeps from the late 1940s to the mid 1970s, and a subsidiary of Hotchkiss. 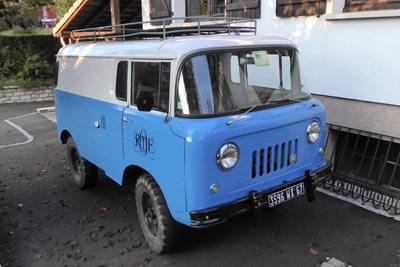 In parallel with the CJ-2A, Jeff has been restoring this 1963 FC-150 van as an RTF (Radiodiffusion-Télévision Française) broadcast truck, but with a camper interior (160K JPEG). See also a rear view (260K JPEG) of this unique FC.


Thanks to Jeff and Claire for being wonderful hosts. -- Derek Redmond