I think Jean-Francois (Jeff) Lavie is the first person to have feature articles about three of his Jeeps here on CJ3B.info. (See the bottom of this page for links to the first two articles.) And these are only a few examples from his large collection of Jeeps, many of which have been fully restored. 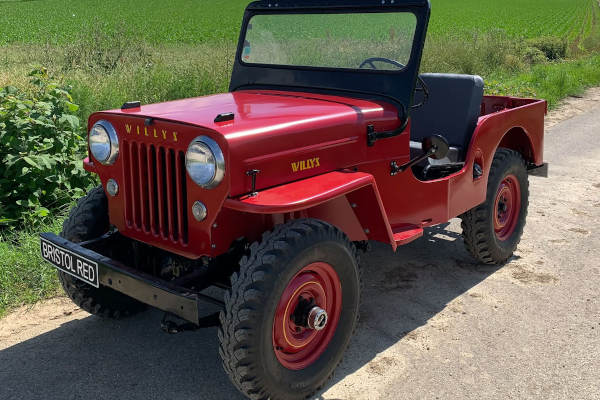 Jeff says, "In the fall of 2018, I decided to rebuild a CJ-3B I had had in stock for years. It was both the right time in my personal life to do a project, and that Jeep would be a nice addition to my previous CJ-2A project (500K JPEG).

"Funny enough, I first decided on the color, following some searching on the net (see Willys Paint Samples 1953-54), and Project Bristol Red was on the go."

Here's a look at Jeff with the 1954 CJ-3B before and after the restoration, although some of the details are not yet complete in this "after" photo. As you can see, it was not Bristol Red to start with; it was actually a former Swiss Army Jeep. 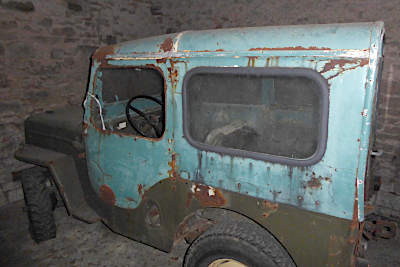 I had visited Jeff in 2017, and at that time I photographed the 3B in his storage garage, complete with a Wenger hardtop, manufactured in Basel, Switzerland and added after the Jeep's retirement from the Army. See the Wenger builder's plate (200K JPEG) and the large rear door (250K JPEG). 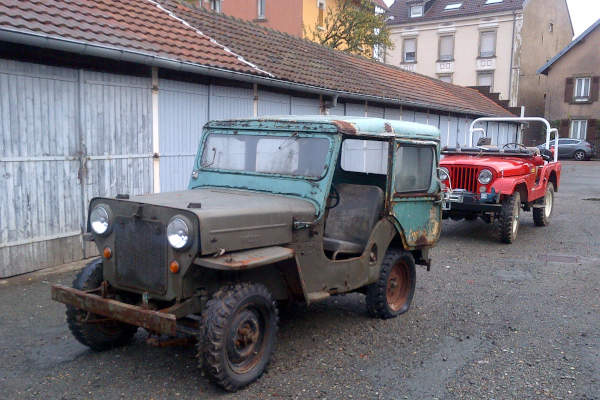 It was more than a year later when Jeff pulled the Jeep out into the daylight, and removed the hardtop. He says he's currently keeping the top in storage, but is hesitant about the idea of reinstalling it and possibly damaging the paint on the 3B. 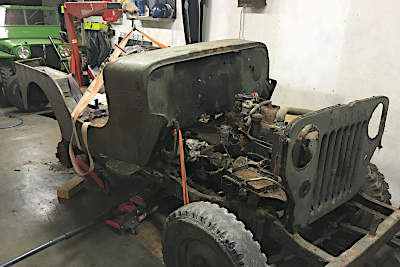 Jeff says, "I started in late October 2018 by dismantling the 1954 Willys that had been last serviced in 1978 according to a dash tag. Anti-seize, pneumatic impact wrench, and here we go. As I put new grade 8 nuts and bolts on all my restorations, I mainly cared about keeping the prisoner nuts intact, and all the special screws. 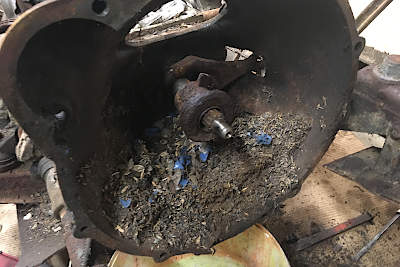 "Then it was the powertrain, and a surprise: the clutch bellhousing was full of felts and other residues from what must have been a mice nest for years. These little animals had also used the place for their toilet and rusted through the disk and seized its hub on the gearbox input shaft. After soaking with anti-seize and using a pry bar, the engine separated from the box. 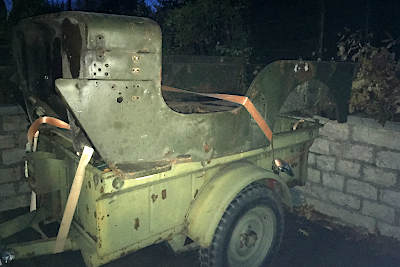 "The body was out within a weekend, and directly loaded on a trailer to go to the sandblaster/painter shop. It was to be fast but took a good four months. But the price was nice... 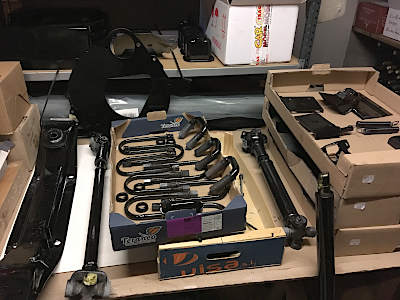 "Once the Jeep was in pieces it was time for cleaning, the worst part of all Jeep projects! For the first time I used my Kärcher pressure washer with a sandblasting kit and honestly this is great for all frame parts, wheels and axles. I finished the job power brushing what was delicate, and then sprayed mono component professional anti-rust followed by a good coat of black polyurethane on all the cleaned components. 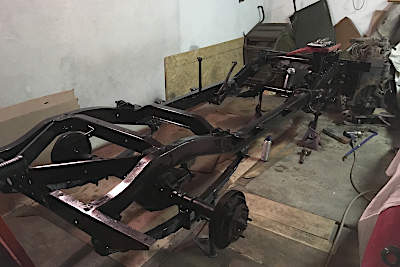 "As I had a rebuilt engine, I concentrated on the rest of the powertrain first, making an inventory of the parts required and those I had in stock. 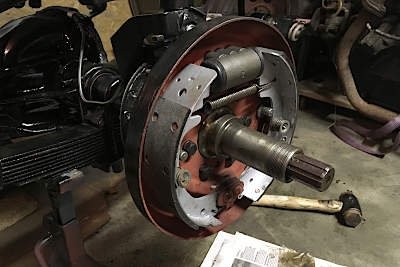 "I ordered in France and from Walck's a full brake kit, suspension bushings, complete clutch and lot of miscellaneous rubber and felt parts." 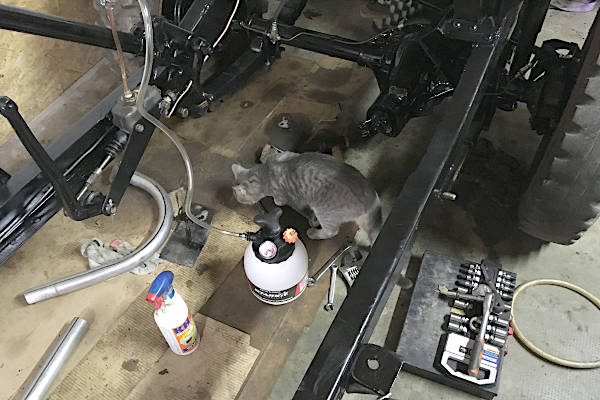 "It was then time to reassemble a rolling chassis, and this was done just before Christmas, when the engine was first started. Before putting silicone fluid in the brakes I made an air test that allowed me to find some leaks without spilling the costly fluid. Here's Wilfried the cat checking for leaks." 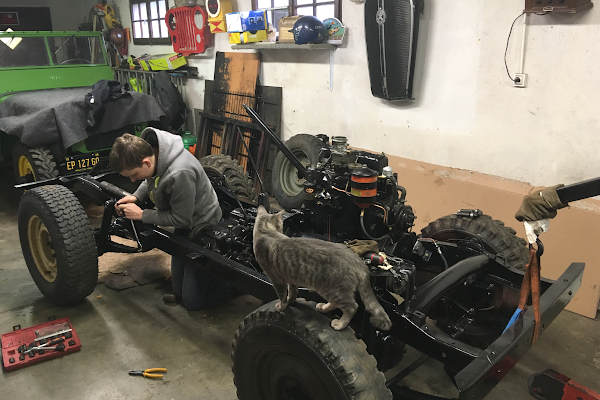 Jeff took this photo to show his two assistants helping out with the final adjustments to the rolling chassis: his son Philippe and once again Wilfried the cat. 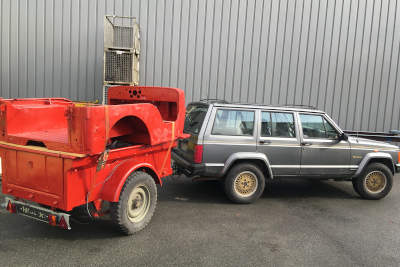 Jeff comments, "Body and trailer back from the sandblaster. The red paint was the primer applied by the sandblasting company. Before on my CJ-2A we did the body work before sandblasting, and it was a disaster. 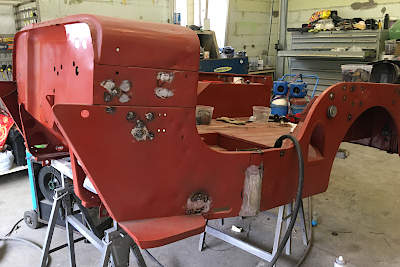 "I could only bring the body from the sandblaster to the body shop in March. Happily, my friend from the body shop who has done all my recent projects had a slot and the body was done rapidly. We counted more than 100 non-original holes drilled, and some rusted through spots that were all welded before applying the final Bristol Red polyurethane (300K JPEG)." 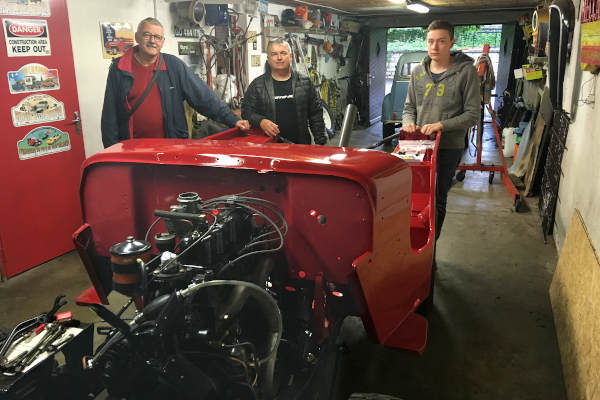 "Putting the tub on the chassis is always a nice moment I like to share with friends. And it makes things easy... 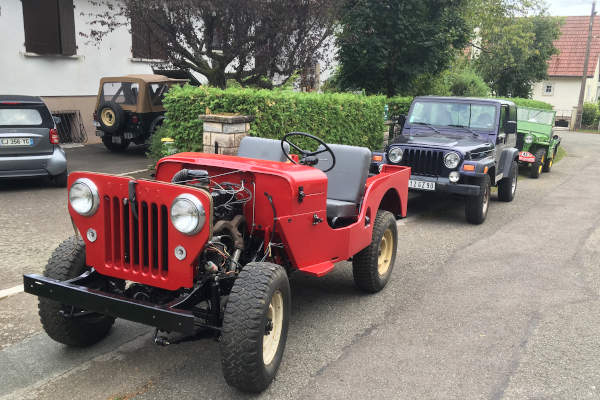 "Now comes the finishing that on these rigs goes quite rapidly, too rapidly even. New Walck's wiring harness and upholstery, installation of a 12V Dynator from WOSP to have reliable charging power, and installation of fixed windshield glass, lighter in look than the original opening windshield." 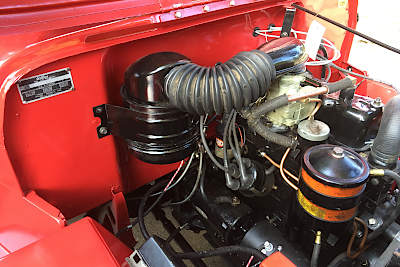 "Here comes the first run, eleven months after bringing the Jeep into the garage, and the first surprise...

"It was impossible to shift in first with engine running. It appeared that the F4 engine I installed is a 1963 ex-FC-150 and has a bigger clutch that requires a specific rear spud shaft. Once I figured it out, scrolling through the parts list, I corrected it rapidly and could hit the road. 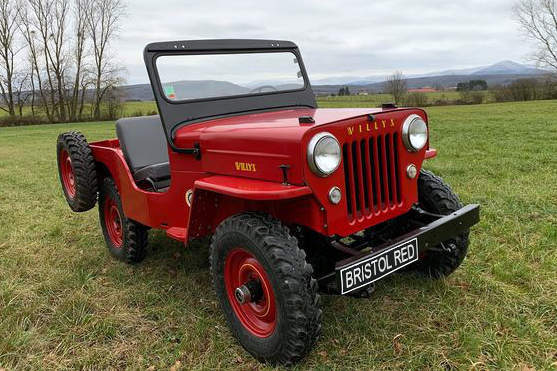 "It's always fun to first drive a new old Jeep, like out of the factory, with no vibrations or parasite noise, sharp steering and brakes, and even better when it's your own built project." 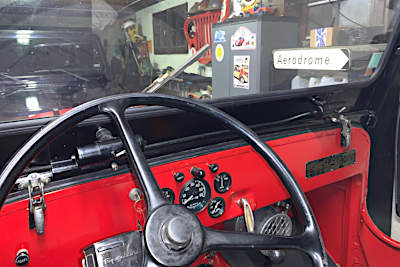 "This is a set of NOS French-made kind of Lucas vacuum wiper motors, found at Musee Peugeot." 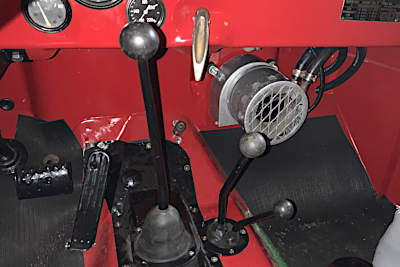 "As a Harrison heater is very hard to find and I had an Evans from the CJ-2A in storage, I installed it. Next step fitting a half cab!" 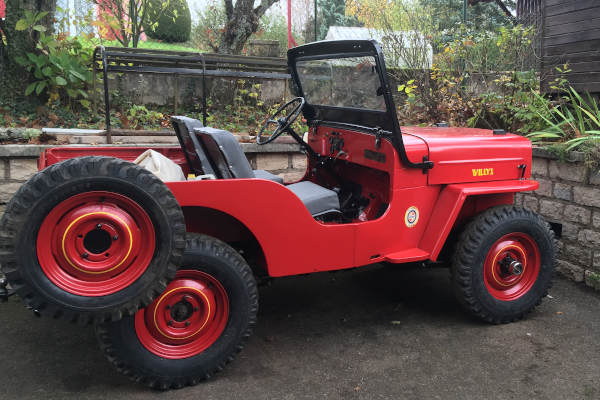 "In memory of our cat Wilfried who passed away recently and who was always present during my work on the Jeep, Bristol Red is now named Willy's."


Thanks to Jeff Lavie for the story and photos. -- Derek Redmond

And see my story on his Hurricane-powered 1950 473-VJ Jeepster, which also includes photos of some of his other Jeep restorations.