with Roger Gainsford and Simon Bruton


The Kingdom of Zululand was a 19th century monarchy on the Indian Ocean coast in southern Africa. In 1879, the British Empire invaded, beginning the Anglo-Zulu War. After an initial Zulu victory at the Battle of Isandlwana, the British Army regrouped and defeated the Zulus in the Battle of Ulundi, and the area was absorbed into the Colony of Natal. (Wikipedia) 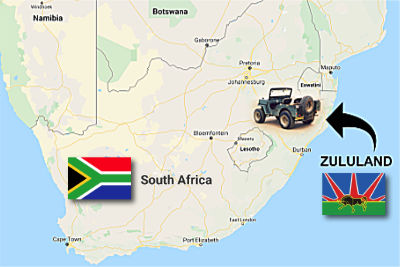 Zululand is now the province of KwaZulu-Natal in the Republic of South Africa. See a larger copy of the map (100K JPEG). Much of the territory is made up of wildlife reserves, and a major part of the economy is tourism.

Roger Gaisford and Simon Bruton have both sent photos and descriptions of their experiences driving Willys Jeeps in the region. 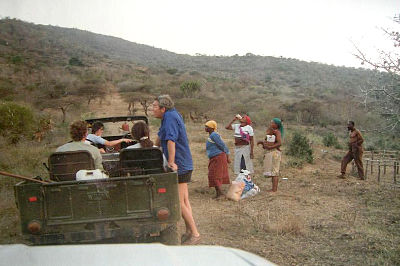 Simon explains, "My love for flatfenders comes from long 4x4 camping trips during my childhood into remote areas of Zululand with a group of my parents' friends who had original, standard Jeeps. Those Jeeps took us to incredible remote, rugged places.

"Here is the typical scenery of this Zululand Battlefields region where the Anglo Zulu wars of 1879 took place." 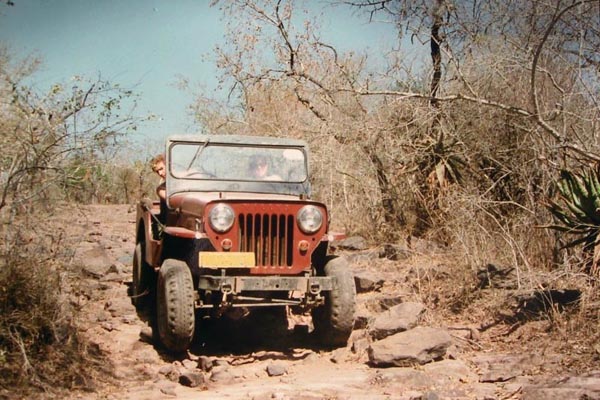 "I love the distinctive sound of the Willys 4-cylinder motors -- I think it is partly that big steel fan that makes a distinctive whine as it accelerates." 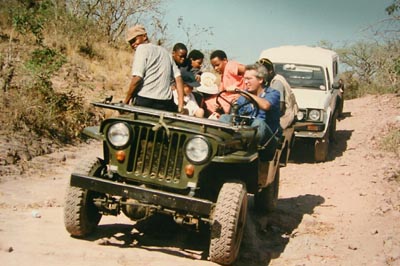 "This is a Jeep taxi, African style, giving a friendly lift to some of the locals down one of the mountain passes." 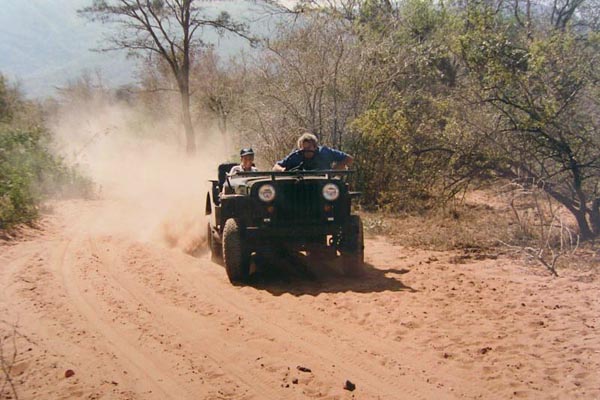 Simon says, "This photo explains why I am hooked on old Willys Jeeps; that is me at the age of about 10 in the passenger seat of Roger Gaisford's CJ-2A.

"Roger has a wide knowledge of the history and people of Zululand and the Battlefields area, and conducts tours along some of these old 4x4 trails." 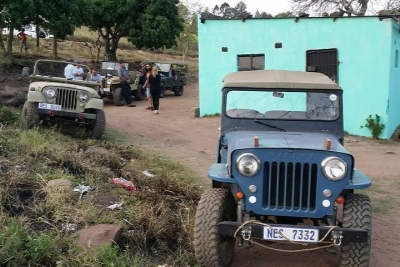 Simon later spent eight years restoring this 1964 CJ-3B, assembled by Willys Afrika in Johannesburg. Roger took this picture of it "outside a local bar while on a 4x4 run through Zululand." 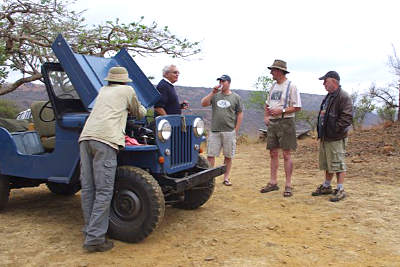 Simon comments, "Being a sixties model, the grille had no Willys stamping on it. Flatfender Jeeps are fairly rare in South Africa, and most Jeeps you see are usually fiberglass replicas, so I wanted to have the Willys stamping to identify it as a made-in-Toledo original. Luckily I did manage to get hold of an earlier model grille with the Willys stamping."

See the full story of the restoration in 1964 CJ-3B in South Africa on CJ3B.info. 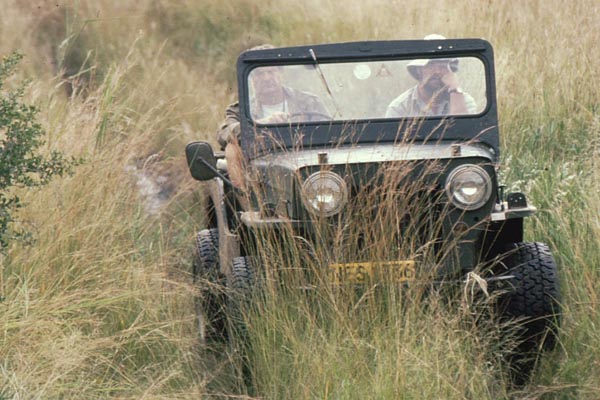 Roger is seen here driving his 1963 ex-South African Defence Force CJ-3B, into which he swapped a 2.5-liter Chev engine (the Iron Duke.)

He comments, "Could cruise at 100 all day on standard T90 box and 5.38. But in hard going it cannot pull the skin off a rice pudding. The motor was designed for cars cruising at 110. Pull at under 2500 revs and down she suddenly stalls. An F-head never does that; it pulls like the devil pulling sinners." 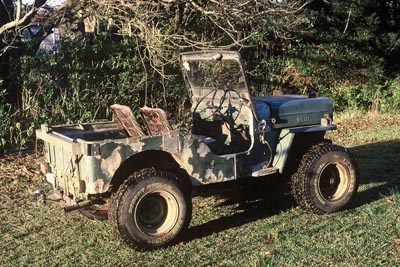 "Right-hand seat toolbox is cut back to allow extra 5-gallon petrol tank. Blackout lighting and tow rings on front bumper. I hot dip galvanised my body because of rust from the Zululand coast. (See photos in CJ-3Bs in the Sand on CJ3B.info.) But the metal became brittle from the heat of the galvanising and the paint peeled off." 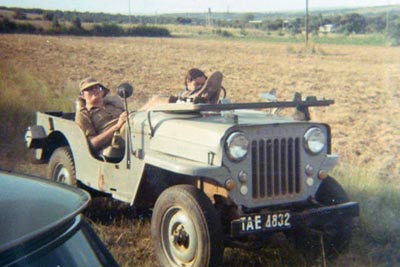 Roger took this photo of Len Van Onselen in his 1955 CJ-3B, and he says, "Len was a geology student in Pretoria who bought this Jeep from a farmer near Lydenburg in the Transvaal, South Africa. The price was 240 Rand, then about $200, and he used it for some years, in the bush and also the beaches of Zululand." (See CJ-3Bs in the Sand.) 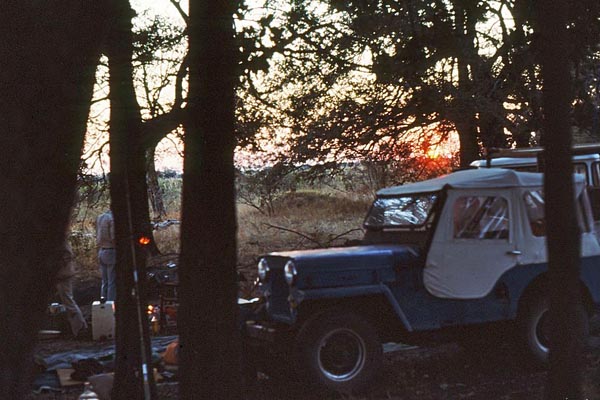 "I live in Zululand, and over some years I have also crossed Botswana many times (see the map) and driven many cars, Land Rovers, Toyotas, Chevrolets, Fords and in 1964 a DAF school bus from Pretoria. Cruisers break transmissions, Land Rovers just break. Not one has given me the adventure of traveling as have my Willys Jeeps." 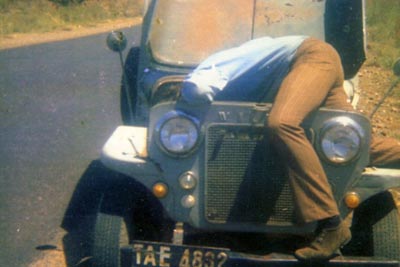 As Len dives under the hood, Roger provides some history of Jeep production in South Africa: "Willys Afrika assembled Willys pickups, Station Wagons and Jeepsters, as well as CJ-3Bs and CJ-5s. Later there were many CJ-6s and Gladiators for the South African Defence Force, as well as Wagoneers. Praetor Enterprises then took over with Gladiators, Wagoneers and CJ-5s and 6s. Toyota and Volkswagen also later assembled 6-cylinder CJ-5s, 6s and 7s. We have had the lot, and used them too." 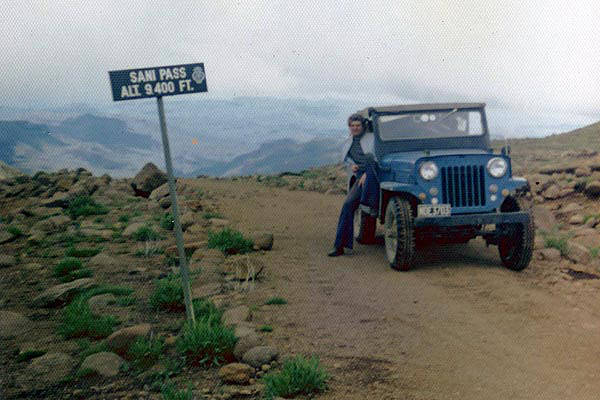 "Len sold the '55 3B to Paul Garner. Paul and his wife Bev used the Jeep extensively, doing trips from his home in Natal 1000 miles to the Cape, up the steep Sani Pass into Lesotho (see the map) and into wild Botswana where his 3B was as an ant to an elephant." 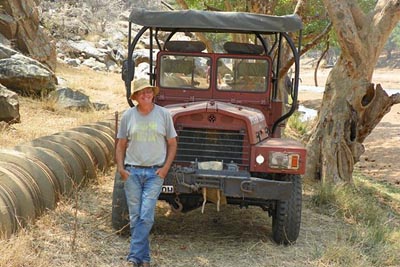 "There is nothing that comes close to a Jeep except an Israeli M325 of which we have a couple we use on a very wild piece of Africa in Botswana. This photo shows myself with my ex-Botswana Defence Force M325 Command Car."

Note: the AIL (Automotive Industries Limited) M325 Command Car (450K JPEG) was produced in Israel from 1970 to 1993. It's designed for carrying up to 12 troops and four 7.62 mm machine guns. Mechanically, it is based on the Dodge Power Wagon, which it succeeded in service for the Israel Defense Forces. (Wikipedia) 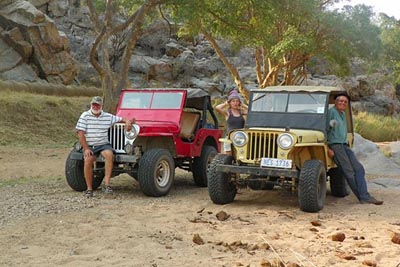 "This is me with my yellow 2A, and Aubrey in the red 2A, in the bed of the Limpopo River." 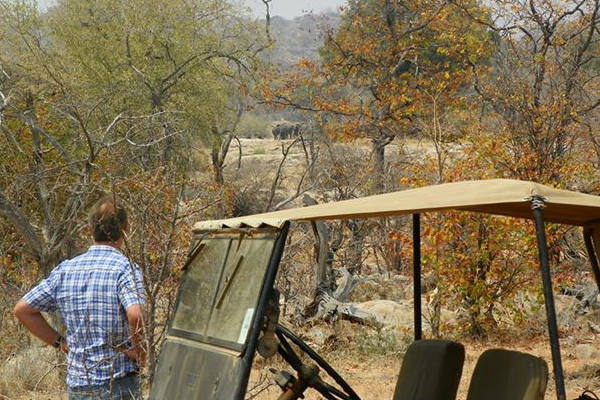 "Herd of elephant in the distance here.

"I lie to people telling them the 2A I now use is the original I bought in 1969. I used it so much on the Zululand beaches it rusted to bits. However, the 2A I have had since 1980 uses elements of my original 2A, so I do not feel too bad about lying..."

Thanks to Roger Gaislford and Simon Bruton for their stories and photos. Thanks to CRW Flags and Martin Grieve for the KwaZulu-Natal local flag seen on the map. -- Derek Redmond

See Simon's restoration of a 1964 CJ-3B, and a military 3B belonging to Jens Buus in Cape Town, with some more information on SADF Jeeps.

Also on CJ3B.info, see a Mahindra CJ540 in Swaziland.