As far as I can tell from Dating a CJ-3B by Interior Details, my 3B is a 1964 model. It has a 1964 engine number, no Willys stampings, the large speedo, the T-handle park brake, and steering wheel with the large rubber horn button. It is right hand drive and was assembled in South Africa. 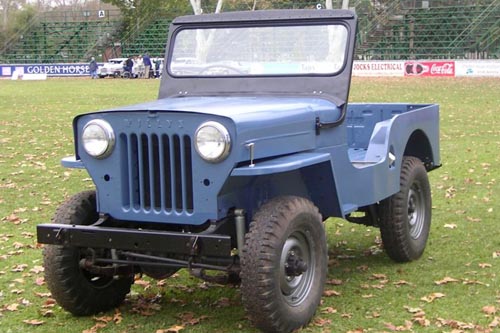 Being a sixties model, the grille had no Willys stamping on it when we got the Jeep. Flatfender Jeeps are fairly rare in South Africa, and most "Jeeps" you see are usually fiberglass replicas on a VW Beetle pan or Japanese pick-up chassis, so I wanted to have the Willys stamping to identify it as a made-in-Toledo original. Luckily I did manage to get hold of an earlier model grille with the Willys stamping. The hood is a poorly made replica which fits terribly but will do for now. According to Tailgate Reading on CJ3B.info, the tailgate is definitely not original for the vehicle. The tailgate has the Willys stamping, no cutouts and has footman loops which seem to indicate it is pre-1951. It has the fittings for the ventilating windshield but I don't have the center frame so have just put fixed glass in it.

My father bought the Jeep about 8 years ago as a light restoration project. It was our first Jeep, we were the uninitiated and unfortunately it had more problems than we foresaw. We thought the body was original and in good shape but after sandblasting it (removing layers of bodyfiller) we discovered it was a badly made and badly rusted repaired/replacement body. We discovered that the frame was rusted within the boxed section beneath the battery, so at that point realised that a complete frame-up restoration would be necessary. The rusted section of the frame was cut out and replaced (120K JPEG). The frame had cracks around the spring hangers ahead of the rear axle, which required welding. See a photo of the unrestored rolling chassis (90K JPEG). 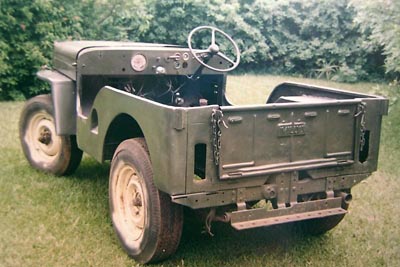 As one can see from this "before" photo, the Jeep had many original parts missing when we bought it, which were difficult to source in South Africa. It had no seats and no pinion in the rear diff but the motor was running so I took it for a first and last drive (in front-wheel-drive) round our small front garden sitting on a wooden box. The next day my father and I started stripping it down. If I had known the motor would only be ready to start again eight years later I would have video'd that last historical drive. 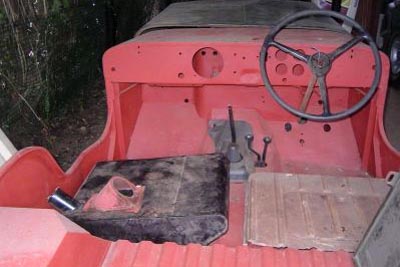 The only part of the body that was still the original steel was the firewall and cowl. As mentioned the rest of the body was badly rusted replacement steel, so we cut it off at the footwell and had a sheetmetal worker remake the body from the firewall to the tailgate. The reproduction body turned out very well; only the educated eye can see that the ribs in the floor are not the original size and shape and that the bottom corners of the rear wheel arches are not rounded. A toolbox donated by a fellow Jeeper was grafted back into the remanufactured body as the original was badly rusted. 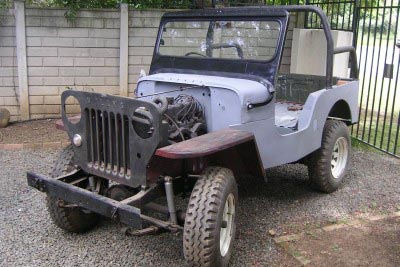 I wanted to preserve the windscreen frame as best as possible so had it galvanised and then powder coated black, which worked out very well. Thanks to a complete overhaul of the Carter YF by our local carb center, and help from CJ3B.info on setting the static timing, the motor fired up easily after standing for eight years. The motor, gearbox and transfer case are the only parts of the Jeep that have not been completely overhauled -- I'll be holding thumbs. The only parts of the 3B that will not look original are the seats and the rollbar. High-back seats and the rollbar will allow for the extra safety of inertia-reel shoulder seatbelts. 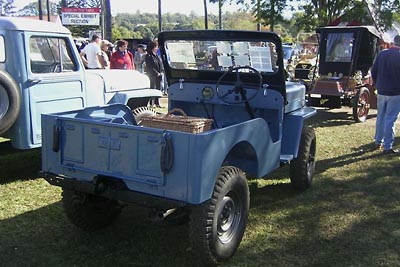 A few weeks back my home town held its annual Cars in the Park show and the freshly restored CJ-3B had its first outing. At this stage the restoration is about 90% complete. Also see a picture of the CJ-3B at the show alongside its older brother, my dad's 1956 Willys pickup (120K JPEG).

At 42 years old my Jeep bares all its scars. It must surely have a proud history of hard work so shows its battle wounds with pride, shunning plastic surgery (only small amounts of filler plug various holes that would otherwise let water in. Unfortunately I know nothing of its history, but know that it will still have a long history with my family on travels to exciting destinations, or just Sunday drives to walk the dog.

I know it is easy to say but I hope to never sell this Jeep; it was my first car and I hope it will be my last. There is too much of my blood, sweat and tears in the 8-year restoration to part with it!

To understand why I have a passion for old flatfender Jeeps one just needs to look at Exploring Zululand in Old Willys Jeeps, with a picture of me in a Willys at about 10 years old. -- Simon

Thanks to Simon for the story and photos. -- Derek Redmond