Here's another Willys Jeep with a mystery history. It may have been originally sold to the Union of South Africa military, but that is largely speculation. 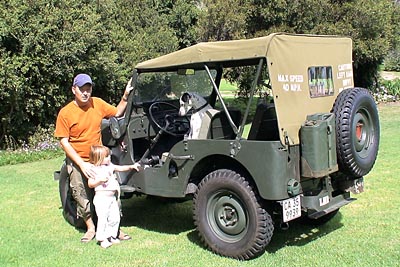 Jens Buus sent this photo of his project in late 2007, and reported "Coming along nicely. Beachwood Canvas have been great and their help outstanding. They supplied among other thing a top, spare wheel carrier (M38) and original front fender blackout light." See also a front view photo (190K JPEG).

A few years ago he told us what he was aiming for: "I have been restoring it to military condition. I'm not sure if it was a military Jeep. Actually I don't think it was, but that has been my choice. People round here don't recognise a Jeep unless it looks military; they think it's a kit." 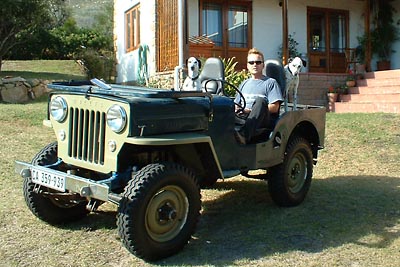 In 2002 he said, "So far I have restored the engine (F-head). The engine number was very unclear when I rebuilt it; only the four digits "4J38" were visible. A chassis number "73757EE" looks like it was recently stamped into the chassis for licensing purposes, so I don't think it is original. Any idea where I could find out the history of this vehicle?"

Well, an engine number of 4J38XXX would indicate a late 1953 model if the engine is original, according to our Serial Number and Engine Number List of surviving CJ-3B Jeeps. Sometimes that chronological list also gives some clues about how a Jeep found its way to a particular location, as there are some clusters of Jeeps obviously shipped overseas together. But in this case there is no indication of a large overseas sale in late 1953. 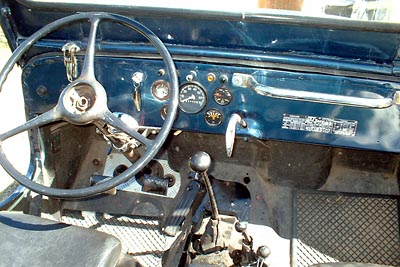 Because of the British and French colonial influences in Africa, it's more common to find Land Rovers or French Hotchkiss Jeeps in use by military forces. But according to the South African War Museum, the South African Defence Force did purchase some 3B's: "In 1960, 25 CJ-3B Jeeps were ordered as well as 61 of the more modern CJ-5. Of the total 88 ordered, only 85 were delivered at first, the rest arriving at a later date. In about 1963/64 the SADF purchased 109 CJ-6 Jeeps." -- R Henry, for Chief Curator J L Keene, 6 October 2003. 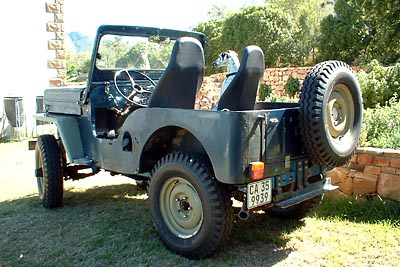 Jens says, "Buzz, one of our dogs, loves the Jeep and I just can't get a pic without him in it.

"The original condition I got it in was more for off-roading. It had wide tires and a raised suspension (90K JPEG). You may notice that I have already put narrow tires (7.00x16) on, and I intend to lower it soon by about 60mm. It had a roll bar, lots of aluminium plates (cosmetic I thought), bucket seats, etc."

"Body parts are non-existent here, but I have found someone locally that rebuilds Jeeps and he has put me in contact with a company in the Philippines that I can get some body parts from. My intention is not to overdo it on the military thing, but I believe they can supply seat frames for the MB (do you think they should fit?) a bow set, jerrycan holder and the odd bracket or two." 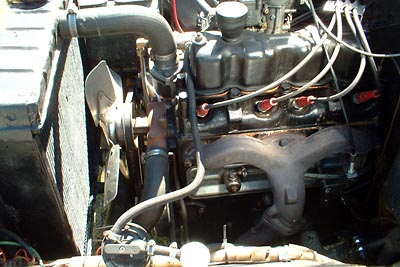 "The engine was in bad shape. When I checked the oil level the dip stick was white, and it had a bad knock. Fortunately I found a place near Johannesburg (far from where I live as always ) that had bought all our army surplus. They had just about everything I needed for a complete overhaul. I had to scratch around for some parts though." 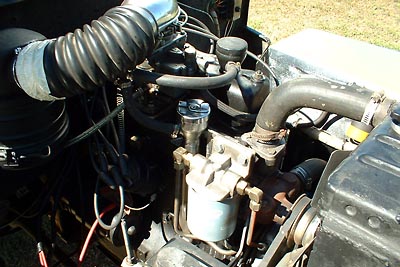 "Still got a few leaks but the motor sounds and runs quite well. The only bits that aren't original are fuel pump, carburetor, radiator, oil filter and 12V electrics. Mechanically I must still overhaul the gear and transfer boxes. They sound a bit rough."

See also some 2010 photos from Jens of the completed project: CJ-3B Restored as M606. -- Derek Redmond