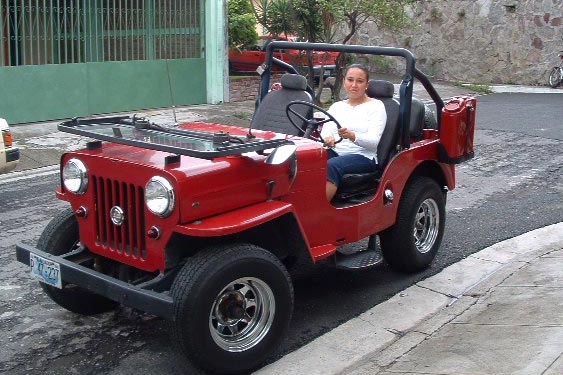 Joel writes in Spanish: "I live in El Salvador in Central America, in the capital city of San Salvador, and I have owned my 1964 Jeep for about 10 years. I bought it in an auction from the army -- it was painted yellow at the time.

"My wife is called Ligia, and she also enjoys the Jeep. We're proud of the vehicle; when I drive it (80K JPEG) in the streets of the capital, people admire our dedication in getting it into such good condition.

"My objective now is that my son who is 3 years old, will drive it when he is old enough, and the Jeep will then be around 50 years old. 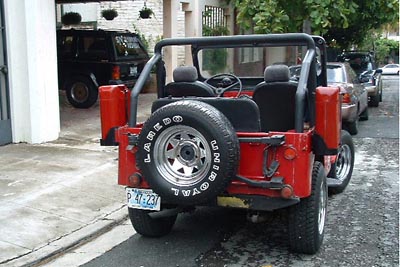 "I have made modifications such as adding wide aluminum rims, fuel cans and spare rim at the back, and an electrical fuel pump.

"I have wanted to buy a canvas top, but in El Salvador there are no places that sell them. If somebody can recommend to me where to buy one I will be thankful. 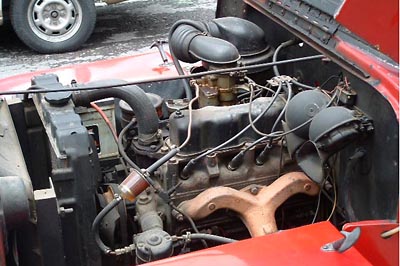 "The Jeep has some mechanical problems, such as an oil leak from the transmission, but I have not found a mechanic that can repair it, and I would be happy to get advice on the matter. 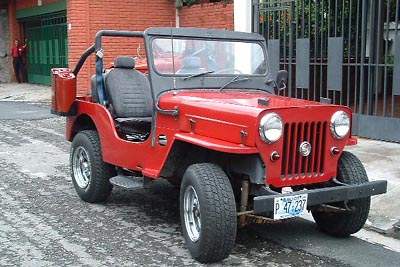 "In the first years I owned it, I would take it to the mountain, the sea and on other long trips, but at the present time I only use it on the weekends, to avoid deterioration from too much use. In my country, parts for an antique vehicle that dates from 1964 are expensive. There are many of these Jeeps here, but an association or club does not exist. You can see them mainly still rolling through the streets of the towns, or even loading coffee harvests.

"At one time I considered selling the Jeep, but when my daughters heard about it they began to cry, and I decided to keep it in the family."

Thanks to Joel for sending the photos from El Salvador. -- Derek Redmond