This is Part 2 of Glen's story of his scratchbuilt CJ-3B project, with a CJ-5 frame and a 1981 Isuzu diesel engine.

In Part 1 he built the drivetrain and started the bodywork. -- Derek Redmond 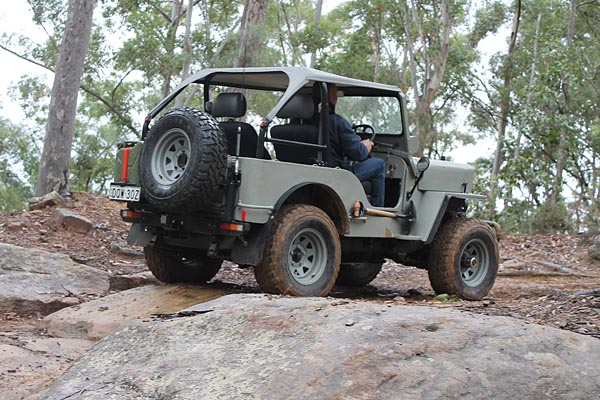 This started off just going to be an el cheapo fix-up project using parts on hand or whatever I could make fit, cheap.

I ultimately decided on a diesel setup and a more modernised build to resurrect this old girl. 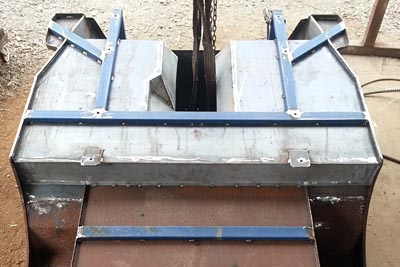 Here's the sub-frame for the body; I didn't follow the factory layout but I think this arrangement will work fine. The original top hat channels were totally kaput, so rather than replicate them I have used 50mm x 25mm x 1.6mm rectangular hollow sections. 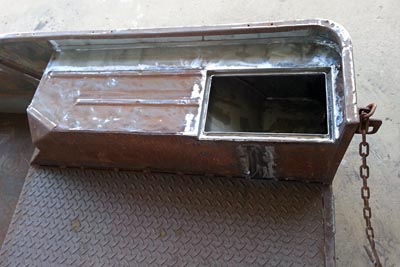 Got the left and right rear storage bins mostly finished. The left side needs to allow for the fuel line going through, so it's a bit of a difficult opening to seal up. Lack of storage places is the only thing I don't like about the older Jeeps.

I have decided to leave the original under-seat toolbox out, and make a storage space under the right seat accessible from the front so the seat won't have to tilt. The new tunnel makes the original tool box impractical to refit. Those, along with a centre console and under-hood storage, should satisfy my obsession. 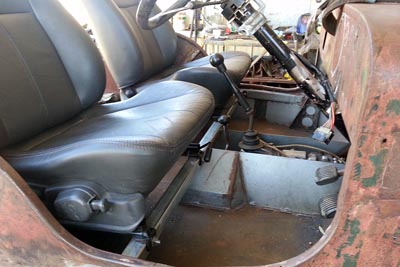 These Subaru seats are the best I have found so far for my purposes; they have a relatively narrow distance behind the lumbar region so you can get your bum as far back in the seat as possible.

I didn't need to notch the CJ-5 to use these seats, but the 3B is a bit more compact. Decided to do the notching to move the seat back (240K JPEG) two inches or so. After the cut it had the legroom I wanted.

The steering column is out of an old Mitsubishi 4WD ute. That lets me have the headlight dipping and hazard light switch on the column, rather than on the dash and floor like normal. 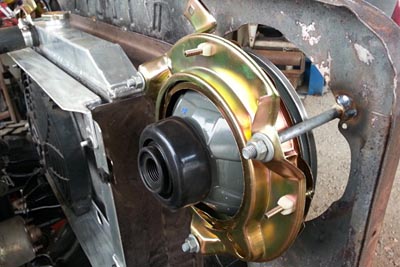 I was also thinking of doing something different with the headlights. The original buckets are totally shot so I am mounting the lights further back in the grille like the military Jeeps did.

Easiest way to do it appeared to be a few bolts welded to the grille panel and use a nut either side of the mounting holes, so they would sit back inside the distance I want them to. Other benefit is that any major lighting alignment can be done by adjusting the nuts. Lights are about an inch behind the grille. I will make some cover plates to hide the gaps. 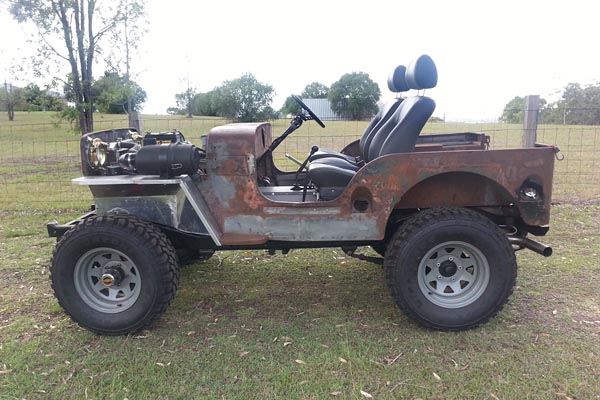 Air intake is almost level to the top of the hood so I will be able to almost go full submarine if I want. 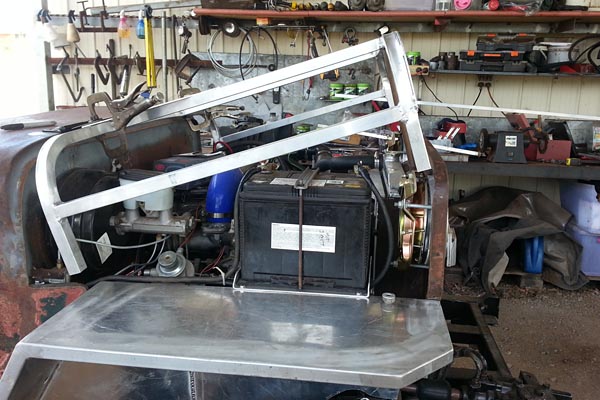 Finished the bonnet framework; fitted and welded the lateral bars between the front and back bows. The front bow needed to be set back away from the grille because as the bonnet lifts, the lower front point gets closer to the grille.

Added on some 1/4"-thick plates where the hinges will bolt through the skin and frame. Also added a reinforcement plate where the bonnet latch will bolt on the sides. I set the grille up to be around 3/8" below the bonnet skin because I will be using a stick on rubber seal between the skin and the grille. 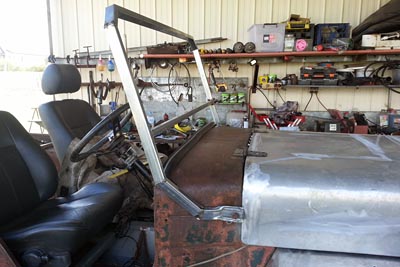 Here's the windscreen frame so far, with the cross bars installed. I have to lower the one above the cowl more yet, or decide if it needs to be removed altogether once the skin goes on. I have set up the frame one inch shorter than the standard height. 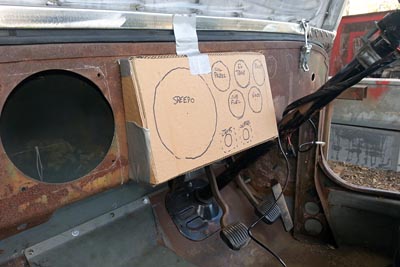 I like storage spaces, so I cut out a big glove box opening where the speedo hole is, and will box under the dash almost half way across from the left side. Then make a removable sloping dash section that holds the gauges etc. This would put the speedo more on the centre line like the CJ-5. The panel would attach to the dash with screws, and hinge down to do the wiring (220K JPEG).

I was worrying about the dash being weakened if I cut out a big opening for both the glove box opening and the instruments, then remembered that the glove box base and side sections will act like a big gusset so I reckon it will be sweet. 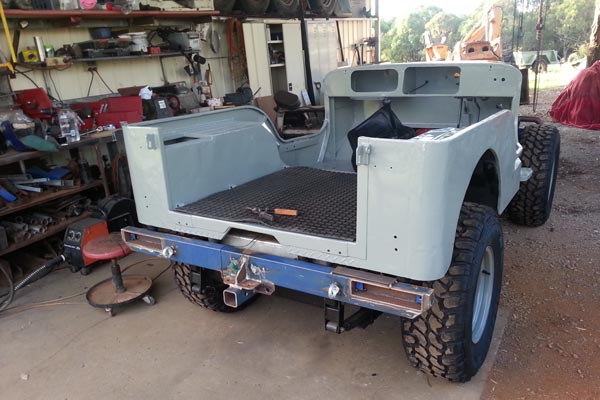 I wanted something that kept with the spirit of the military look, but not the generic olive drab, so I had a look through the local industrial colour charts and found this shade that is used on everything from roof sheeting to fences. It's called "bushland" down here and is a light olive green with a bit of a grey tinge. Looks a bit different depending on if it's in direct sun or the shade. 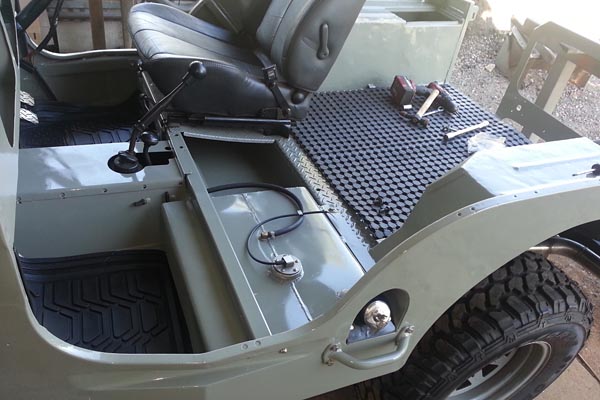 After painting, the beastie is going back together way faster than it did the first time. Under seat fuel tank installed with the valves rebolted and both tank filling points attached.Steering column and shaft to the steering box reassembled. Seat cross bar and seats put in. 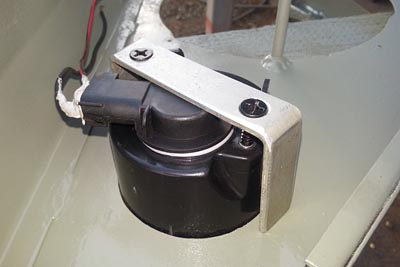 About the only thing I do like about modern vehicles is the LED lights. Not having the correct plug available to incorporate into the future wiring harness, I just soldered some wires to the appropriate terminal in the female plug so I can fit my own plug, and filled the original plug opening with silicon to seal it.

The other thing real Jeeps don't have is a method to retain these LED do-dads in the grille. Taking inspiration from the method that a lot of instrument gauges use to mount, I made a pair of U-brackets simply bent from 1/8" thick x about 3/4" wide flat bar. It retains the unit in the grille even better than I thought it would. 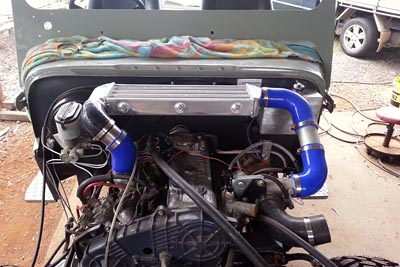 Worked on the intercooler install while the front mudguards are still off. Makes access easier when you can step in around the front tyre. I believe the intercooler was originally out of a small Toyota hatchback.

Because it sits pretty high above the engine it made sense to body mount it, so I re-purposed the bracket I had welded to the firewall that was going to hold the hot water heater I will be installing later. 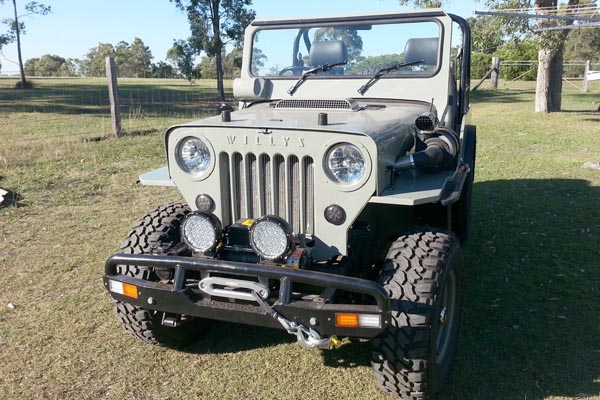 I mounted the intercooler above the engine because there is no room in front of the radiator unless I modified it all substantially to pull the radiator back to make room. So I made a bonnet scoop to direct air in and down. 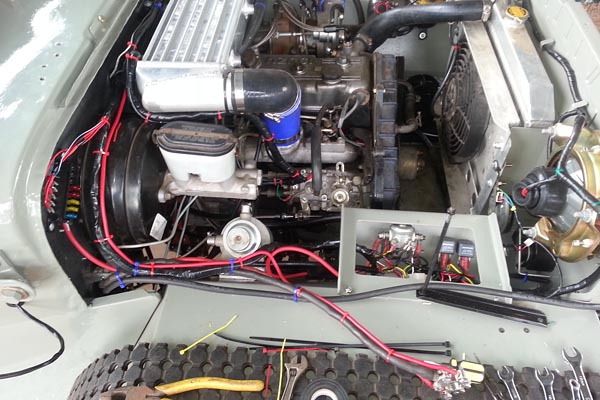 It has taken a bit of time to get the wiring done because I am working with no diagram. Had to determine which of the outlets in the recycled switches and the steering column did what function, then began with the ignition switch, glow circuit and the fuse blocks. It started off looking pretty simple. Then it started getting messier.

Did notes and sketches as I went so I can create a bit of a diagram for my own records. I am mounting the solenoid for the glow circuit and the relays for the headlights under the battery. For the wires to the front and rear I used lengths of 7-core trailer wire. 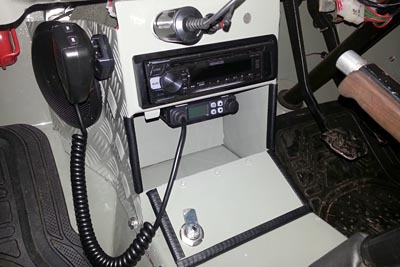 Have been doing the final touches on the interior (200K JPEG). Did the housing for the radio and UHF system, as well as the centre console. 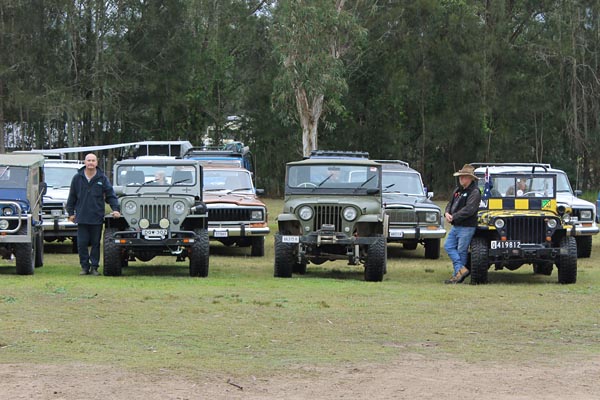 Road legal just in time for "Classic not Plastic" weekend, June 2018. There was a display lineup of all the Jeeps from earliest restored original MB's up to modern ones and everything in between, original condition and heavily modified.

The trips were well looked after, with experienced lead vehicles who had done track recon's before the weekend, radio com's, and a Tail End Charlie making sure no one got left behind. 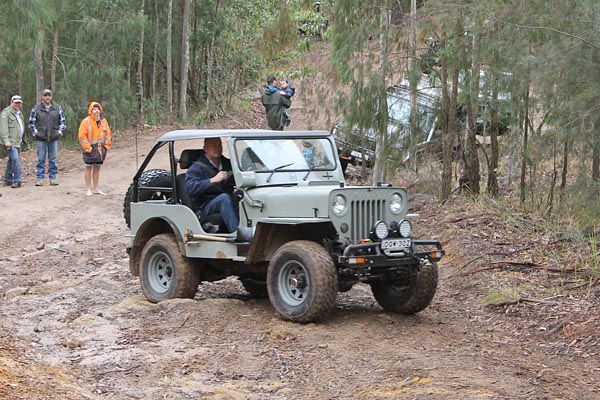 The bride took heaps of photos. This one was just at the start of a slippery hill that I took a little bit too gently the first run up, and lost traction about 2/3's of the way to the top. So backed it down and gave it a good squirt to get the turbo singing on the second run.

Big shout out to the Cherokee Club and the NSW Jeep Club who put on the event; a very friendly atmosphere and everyone was very welcoming.


Thanks to Glen Plumridge for the photos and story. Return to Part 1.

You can also see the original 24-page build thread with much more detail, on the Early CJ-5 forum. -- Derek Redmond