Here's a pretty original and impressive project from Australia. It's just the second Jeep built by Glen Plumridge, who had barely finished a 1974 CJ-5 when he started this one in early 2017.

Much of it is built from scratch, starting with a rusted-out CJ-3B tub and grille, and an early CJ-5 chassis. In the package deal he also picked up a flathead Willys Super Hurricane straight 6, and his original plan was to use that engine.

In this Part 1 and in Part 2, Glen takes us through the whole project. -- Derek Redmond


I am a boilermaker/welder by trade, and got some fitter machinist experience from my father, as well as the all round education on the way things work from growing up on a farm. I have always liked Jeeps since growing up watching MASH and seeing the Jeeps zipping around.

By the time I got the CJ-5 on the road and drove it for a while, I was hooked on the open Jeep driving experience, so getting another one just seemed to happen. I got the CJ-3B and the chassis from the same guys I got the CJ-5 from; they had the 226 Super Hurricane engine there as well, so for a few extra bucks we did a combo deal. 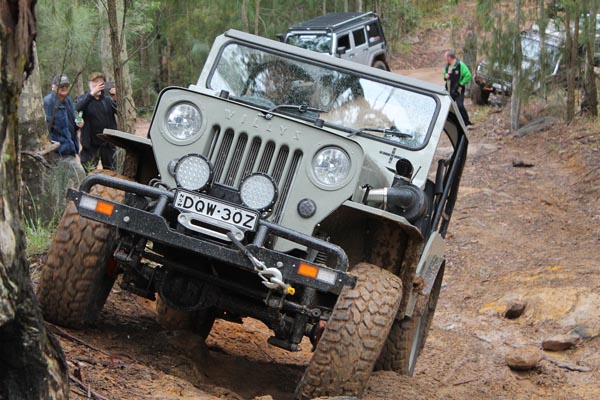 But I thought a diesel would be good, and eventually the new plan was to build the 3B as a 5-speed turbo diesel that should be both fuel efficient and powerful enough to move it at highway speeds, and have good torque to make the 5.38 diff ratios awesome off road. 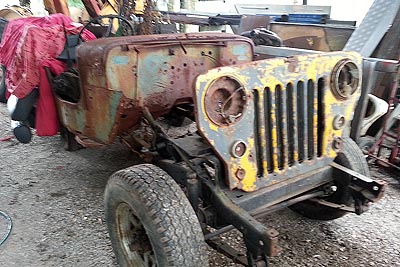 I managed to find an Isuzu 1.8 litre diesel (240K JPEG) built in 1981 that had never been run. It was a factory demo engine used as a training tool, so never got fitted to a vehicle or started. It will also get turbo'd.

In addition to the engine and transmission, a lot of other items were also missing when I purchased this project: fuel tank, front fenders, hood, windscreen frame, tailgate, and seats. 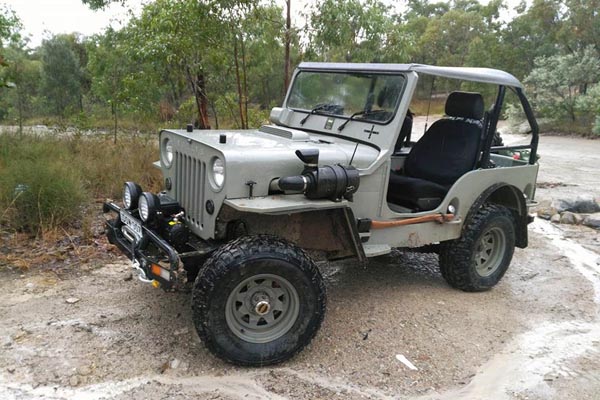 The fenders, windscreen frame and hood will be aluminium. Hood will be a square hollow tube frame to make it stiff, then sheeted. Tailgate will also be alloy probably -- it all helps to save weight.

Seats for the CJ-5 I already did were out of a Subaru and are really comfy, so I will go with something similar in the 3B. 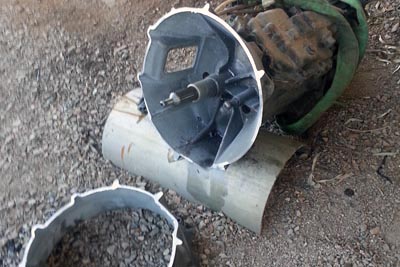 I have decided on a 5-speed transmission out of a 1989 Daihatsu SWB (called a Rocky here in Australia) which is about as compact as I can obtain here, and the outputs are perfect. Will need a bellhousing front modification to bolt to the engine, but I have already sourced a clutch plate that suits both the Isuzu flywheel's clutch housing and matches the spline size in the Daihatsu.

I am lucky enough to have some equipment that makes life easy. A small milling machine to level the cut faces to the exact length I need. It's easier if you have equipment and a lifetime of working with metal as a background. 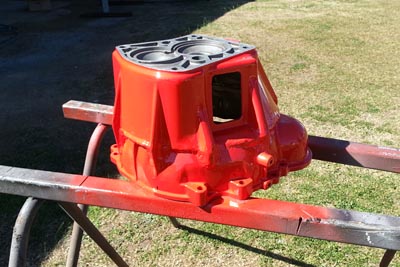 Then a paint job. Because every weld looks better with a coat of paint. 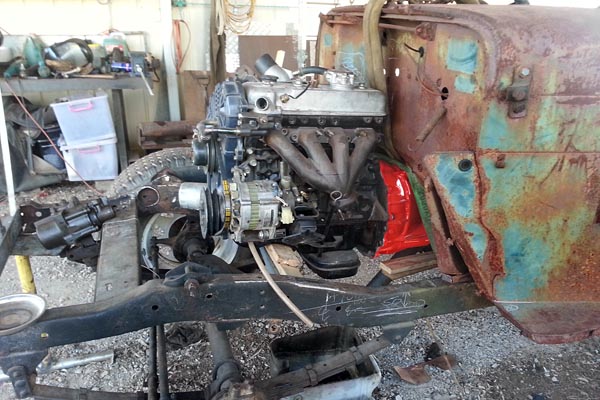 I have been fiddling around with the steering box and the body position on the frame over the last little while, and got around to slipping the engine onto the chassis to assess the positioning and try to see any interference issues before they become too big a problem.

First assembled the engine and gearbox with the bellhousing conversion between them. Then sat it on the chassis where I have calculated it to be the best position. 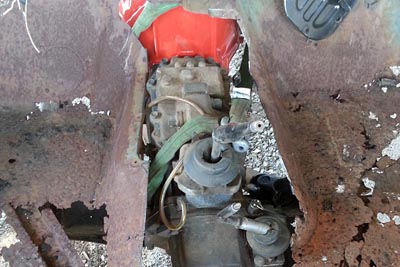 The tunnel will be a full custom job to make this work. The idea is to make the cover with incorporated storage spaces. The Daihatsu 5-speed is a lot bulkier on top than the original T90, and the shift levers are further to the rear. 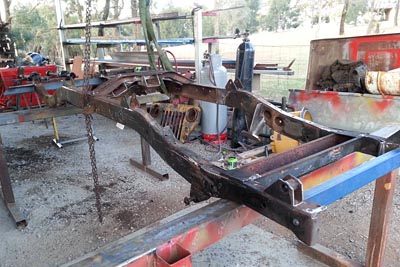 This chassis started life as a CJ-5 but it also had the mod to be RHD here in Australia after it was imported. It has a few cracks in places; at the front, the spring hangers where the shackles mount, and at the rear, where the spring fixed point is.

So I extended the boxing at the front to eliminate the flex point, and the rear mount boxing will be repaired and re-welded. Should be good for another 60 years then.

The blue coloured cross member is an addition to ensure the mount for the steering box can't flex, plus it will also become the front member for the mounting of the winch. 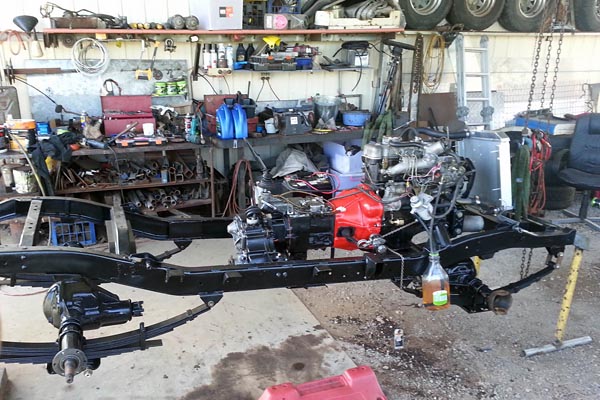 I cleaned up the chassis and gave it the paint treatment as well. So it was just sitting there, looking all spiffy and daring me to put the motor on the engine mounts (260K JPEG) I had tacked in place.

Well, that just snowballed into getting the engine ready to turn over. 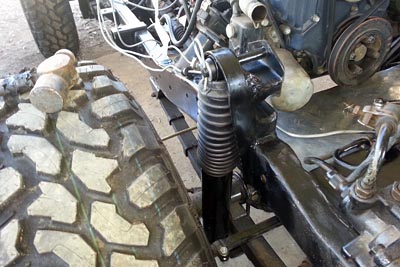 Next step is to put the springs and axles back on the chassis, but I was not impressed with the original leaf plates. They have bent shock mounts and some have small cracks, the holes are too small for the new U-bolts, and I want to protect the U-bolt nuts, so these are not worth modifying. I have made some new ones (260K JPEG) that are a bit more serious.

The shock tower where the steering shaft goes through appeared weak, so I decided to reinforce the shock towers with an external gusset, seen here. Rolled a piece of flat bar and shaped it to clear the relocated mount with a neat taper down to the bottom of the original chassis rail. 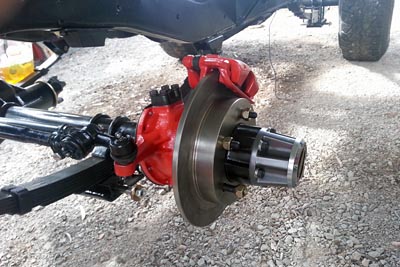 Some decisions just get made for you when you're rebuilding. Decided to inspect the front brakes to see what I needed to order, and discovered that there wasn't anything behind the cover plate. Seems they got scavenged by the previous owner. So that makes the decision to go with front discs an easy choice.

Cleaning the hubs of old crud I pulled out the bearings to do a proper clean and decided now would be the best time to install new bearings. Decided to go a little bit flashy and paint the steering knuckles and brake calipers signal red. Everything else is boring black. 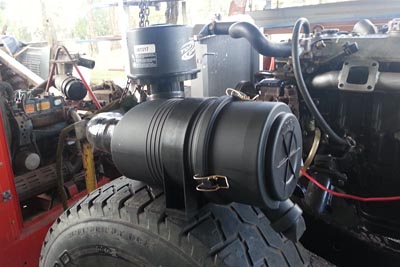 This is the air filter unit I will be using. It will mount on the left fender with the intake tube running through a cut-out section of the hood. It should let the little beastie breathe easy. 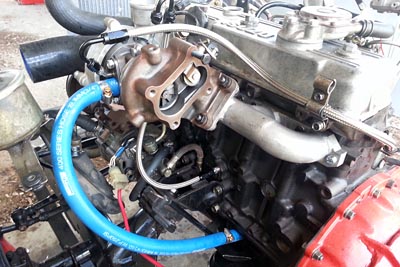 I started to work on the exhaust manifold to mount the turbo, and the bracket to hold the power steering pump. The right hand side of the engine already has the brake booster (170K JPEG) and there is no room to mount the pump that side.

The pump will have to fit in between the alternator and the hose for the air intake to the turbo. Sourced a complete Toyota Hilux power steering assembly (210K JPEG) that will go in with some bracket making. There is a vacuum pump as part of the alternator assembly, that gives the suction to the brake booster. 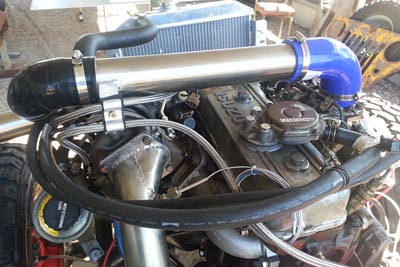 I made a mount for the cross pipe from the turbo, as it vibrated horribly when idling. It also made a nice spot to secure the oil and water feed pipes.

Intalled the exhaust system (240K JPEG), and still need to squeeze the battery in there somewhere. 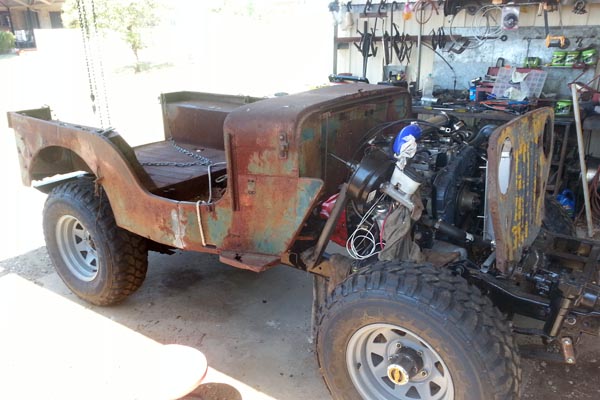 As well as an aluminum under-seat fuel tank, the main tank (210K JPEG) will live between the rear chassis rails, same as the later CJ-5. I had an idea to use a Y piece at the standard filler that comes out next to the seat. It would fill both the under-seat tank, and a pipe to the main tank at the rear. I set the body in place to see what the pipe line would have to look like, and it was impractical.

For the fuel tank switching system, I looked at buying an electric switching valve, but I went with the cheaper option of ball valves and some creative plumbing. 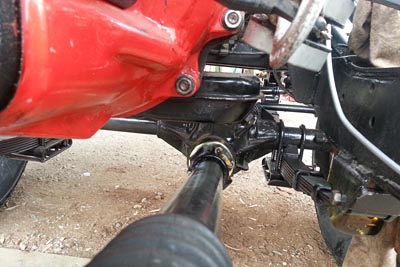 A concern I had about the front driveshaft possibly hitting the sump when the suspension bottoms out started to look like it could be very real. It would be a close thing, so I got a chain puller and compressed the front suspension fully and it just misses by a mickey hair.

The rear driveshaft (170K JPEG) was cut to length and re-welded so it fits the distance from the diff to the transfer case. I was concerned early on that the shaft angle may be really steep because the new transfer case is a little further to the rear than the original would have been. But the Daihatsu transfer outputs are also lower than the original Dana 18 so it looks as good as a Jeep driveline ever looks. 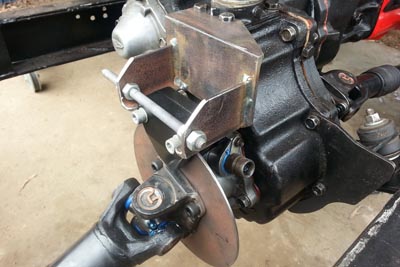 Cut the 1/8" steel disc for the handbrake, and drilled it to suit the bolt pattern. After looking at various ways to mount the caliper, I decided keep it simple and mount it to the selector cover of the transfer case.

The only concern I have is the torque effect of the disc may put a lot of stress on the short distance between the mounting holes if it gets used while the vehicle is in (fast) motion, but a low speed rolling stop and jamming on the brake showed no movement or twisting that I could see. 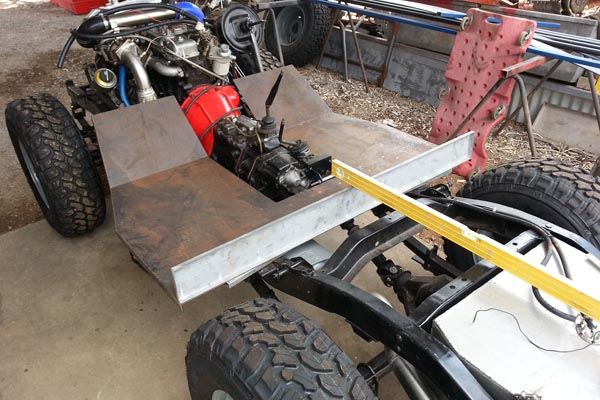 Got the new floor pan fabbed up and tacked. Decided to do the floor pan before putting it in the body so I could get the cut out for the tunnel worked out easily. 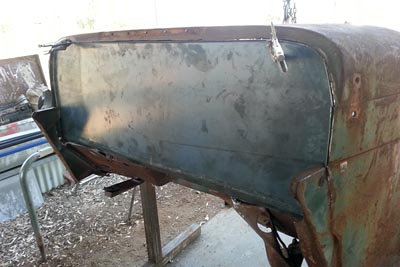 I decided to go with a new rear floor, so got that cut and pressed to shape. But first I will replace the firewall. I would need to modify it anyway to let the brake booster fit the correct spot, and while the the floors are being done it is just as easy to do that as well.

Measured it and cut and pressed the straight bends. All these flat plates are 1.6mm thick (16G). Then cut a cardboard template using the body as a guide, then a steel plate to get the curves at each top corner. Cut off the excess corners and formed the corners to the right shape. 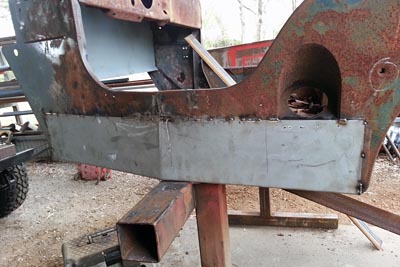 I decided that it would be better to have one big panel insert rather than try to repair the sills and fill rust damage, so here's what I did. Remove the step, and new panel tacked in place. Instead of spot welding the new panels in, I fillet tack weld them in place. Then later those tack welds get covered with Sikaflex sealant. 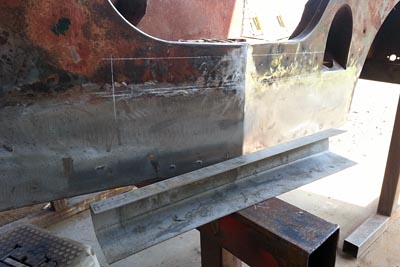 Getting the original steel panels back to perfectly flat is nearly impossible, I discovered, so I thought I would set up body tool storage like the MB and GPW's had, but modified to suit my needs. I want to carry a shovel and an axe so I only need one recess in the body below each door opening. Plus it will let me cut out the worst of the rough sections. Win, win.

I cut out the marked area and inserted the channel shape, about 1-3/4" at the deepest point. Rather than a sideways V-shape, I am going with a squared slot so the handle sits in close to the body. The axe head (210K JPEG) will be above the foot step pointing down. The axe is shorter than the shovel, so it doesn't get in the way of the filler. 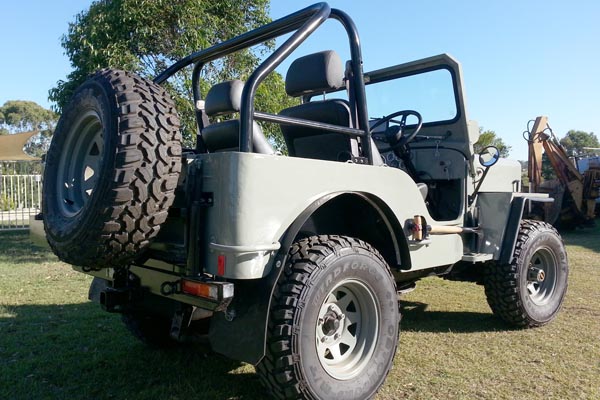 The shovel on the other side will have the same slot inserted.


Continue to Part 2 where Glen tells the rest of the story.

Thanks to Glen for taking us through the project, and thanks to Ivan Wrzos for the July 2018 cover photo. -- Derek Redmond