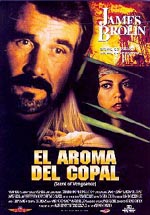 It was in early 1999 that Ricardo Suárez wrote from Colombia to say, "I saw a movie called El Aroma del Copal with James Brolin. It was filmed in Costa Rica in 1995. The movie is full of red CJ-3Bs. They belong to an American oil company and I would say they are the main actors in the movie."

This 1995 Spanish film was written, produced and directed by Antonio Gonzalo. The "copal" of the title, is a resin taken from certain trees. When burned, its smoke is a sacred incense in some cultures. One character in the movie says it can be used to communicate with the gods, including requests for "riches or vengeance." Hence the most common English-language version of the title: Scent of Vengeance. 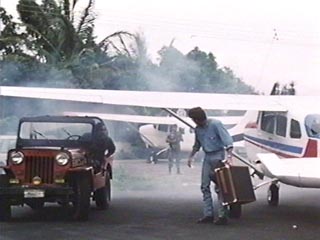 The plot of Scent of Vengeance involves oil company engineer Jesse Martin (played by Jay Roberts Jr.) who is sent to an oil field in the jungles of Central America, where he gets involved with two women and a guerrilla war. Although James Brolin gets top billing, his part as John, the oil field boss, is really a supporting role.

The first shot following the opening credits (and the first shot in the theatrical trailer on YouTube) shows an oil company Jeep meeting Jesse at the airstrip as he arrives in the unnamed Central American country. 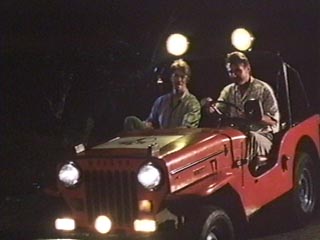 The oil company appears to have several red CJ-3Bs, although only once do we see more than one in the same shot (50K JPEG). This one with the extra driving lights on the roll bar belongs to the boss, who takes Jesse out on the town on his first night in the country.

The oil company logo on the hood of the Jeeps is never shown clearly in the film, but in one scene the Willys name on the grille gets great product placement (50K JPEG). 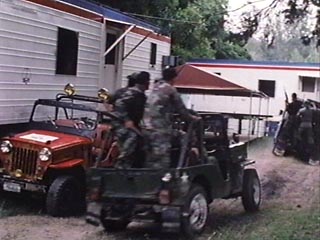 When the army shows up at the oil company camp in search of rebels, they are driving a Land Cruiser, and a CJ-3B with chrome wheels. The white star on the side underscores the point that the brutal military is backed by the United States, but this Jeep is far from an authentic M606. Perhaps because it doesn't make a very convincing military vehicle, it's only seen briefly.

The boss's Jeep in the background here has apparently regained its windshield. Another shot gives us a good look at the dashboard (50K JPEG). 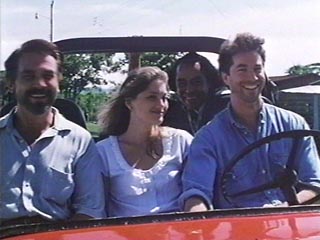 In one of the few scenes in the film where everybody is happy, Jesse drives up to a fiesta in a small town in the hills, with John and the schoolteacher Celeste (Christine Champion).

Scent of Vengeance has a number of things in common with Fire on the Amazon, but is a much stronger film overall. It should also be noted that Jesse's love scenes with Celeste and with local girl Sybille (Seidy Lopez, seen on the poster) are much more graphic than the nude scene in Fire on the Amazon. 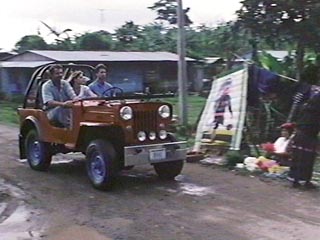 The CJ-3B they're driving here has the same red paint and blue wheels as the other Jeeps, but is distinctive for its chrome bumper and for the three bucket seats (50K JPEG) in the front. 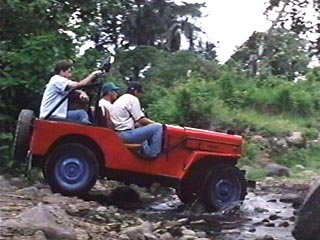 When John and Jesse take John's Jeep to a remote well site, the windshield is again missing.

The driver doesn't mind, and he boots it through streams and over rocks. 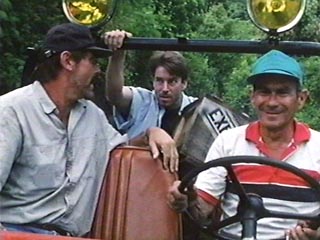 It would be fun except that Jesse is cradling a couple of cases of dynamite in the back seat. Looks like the driver didn't notice the "explosives" label. Although not usually at a loss for coarse and colorful language, this time John just tells him to drive "more responsibly." 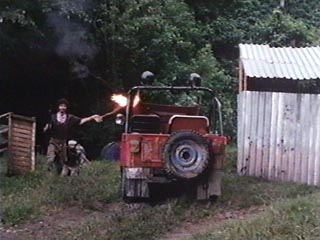 At the well site, they are ambushed by revolutionaries who want the dynamite. As the rebels leave, they toss a torch into the Jeep. 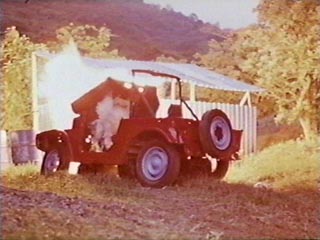 We cut to another angle as the Jeep explodes, and a close look tells us that this is in fact a different Jeep, a junker dressed up in order to be blown up.
There are a few more surprises and acts of vengeance before the film ends, but it's not really what you would call an "action film." Typically we see the aftermath of violence rather than the violence itself. And there are doses of politics and passion, but not enough to really give the film a strong identity. James Brolin fans, meanwhile, may be disappointed in his limited role.

So as a result it's been hard to sell this film in North America, and consequently it's hard to find on video. But for CJ-3B fans it's well worth the search.

Thanks to Ricardo for telling me about the film, and to Linda for eventually finding a copy for me. -- Derek Redmond