Fire on the Amazon 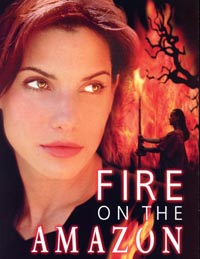 This film, starring Sandra Bullock early in her acting career, was shot in 1990 but not released widely until 2000, apparently because Bullock was unhappy with the result, and probably also because nobody else was very happy with the result either. Users of the Internet Movie Database give it an average rating of 3.4 out of 10, and the general consensus of user comments is that Bullock is pretty good but the writing and direction are amateurish. Click any frame here to see a larger copy (40K JPEG).

As far as CJ-3B appearances go, Fire on the Amazon is not a classic, but there are a few good action shots of the assassin driving a high-hood (whose headlights are falling off for some reason.) There is a big closeup of the grille as good guys Sandra Bullock and Craig Sheffer drive up in a Russian-made GAZ-69 4-wheel-drive vehicle (40K JPEG).

Later in the same scene the CJ-3B becomes a low hood, in a shot which was probably done later, since all that's visible of the wounded assassin is his foot.

The film was shot in Brazil, although it is set in Bolivia. Plot summary from the Internet Movie Database: In Bolivia's Amazon basin, corporate cattle ranches are replacing the rain forest. When the charismatic leader of the rubber tappers forges an alliance with Indians to protest deforestation, he is assassinated. R.J. O'Brien, a US photo-journalist (Sheffer) who has no skills as an investigator, wants a story when he thinks the police have framed and murdered an innocent Indian as the assassin. In his search for the truth, he involves activist Alyssa Rothman (Bullock, who drives an early CJ-5.)

As O'Brien gets deeper into trouble with the cops (who drive a YJ Wrangler) and the real assassin, he not only needs Alyssa's help but also that of the Indians' leader (who drives what looks like a Willys stakebed in this scene where O'Brien tries to convince him to help). The final confrontation with the assassin is the scene with the CJ-3B.

Thanks to Hobbs for spotting the CJ-3B in this film. Thanks to Roberto Flores and Christopher Land for identifying the GAZ for me. -- Derek Redmond

Elsewhere on the web, you can download the movie trailer for Fire on the Amazon.