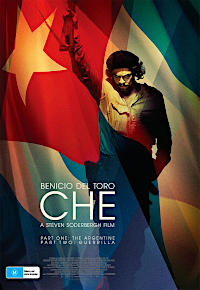 Ernesto "Che" Guevara was the Marxist, physician and guerilla fighter from Argentina who played a major role in the Cuban revolution in the late 1950s. Time magazine named him one of the 100 most influential people of the 20th century. A number of movies based on his life have been made, including the two-part Che (2008) directed by Steven Soderbergh and starring Benicio Del Toro in the title role.

The first part, The Argentine, depicts Guevara's struggle for victory in Cuba; the second, Guerilla, follows his unsuccessful attempt to bring the revolution to Bolivia, culminating in his death. 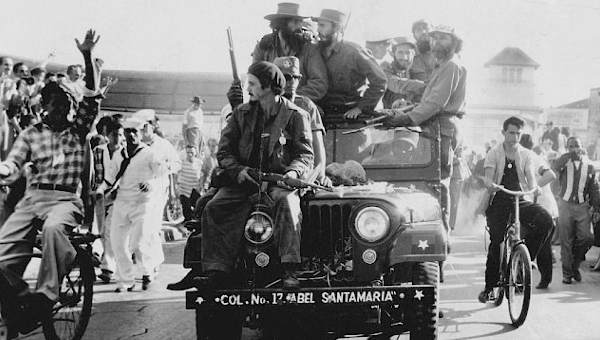 This is not a frame from the movie, but a photo of the real Guevara (front) entering Havana victorious on 8 January 1959, with Fidel Castro (center), and Camilo Cienfuegos (left, with the beard) who became head of the Cuban armed forces.

The Willys appears to be an export CJ-5 (with a split-pane windshield) and carries the name of Abel Santamaria, an early hero of the revolution who was imprisoned and killed.


Part One: The Argentine 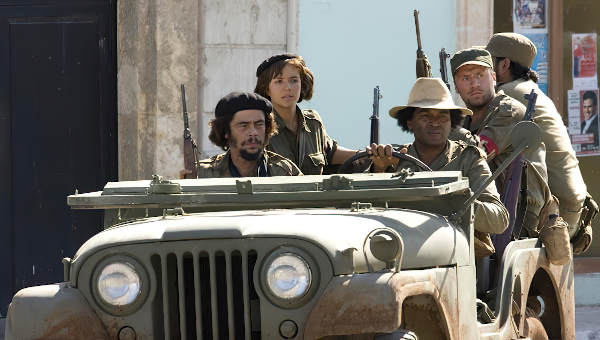 Steven Soderbergh and his crew shot Part One of Che in Puerto Rico and Mexico. Credit to them for finding Jeeps that pretty well match the look of the export CJ-5s that show up in all the actual photos from Havana. This one looks like a Kaiser M606A2, the military export version of the CJ-5. 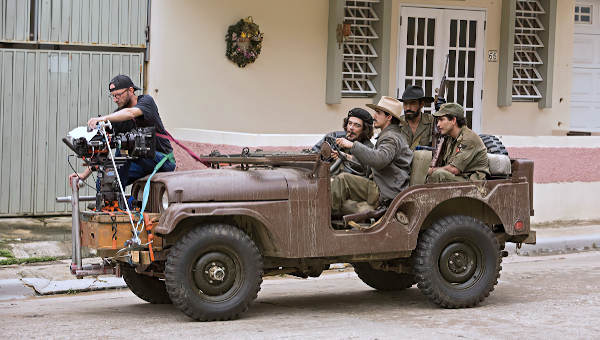 The difference from all the historical photos though, is that in the film the windshields are down, and this picture shows why: Soderbergh's camera has a much better shot of the characters without the windshield in the way. The Jeep seen here seems to be an M38A1 with front fenders from a later AMC CJ-5. 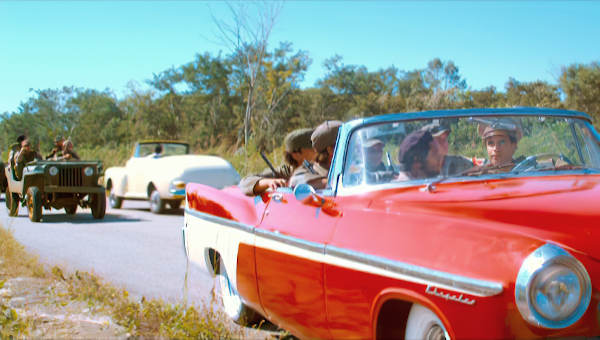 A good scene at the end of Part One shows how serious and committed Guevara was, even at the moment of victory. He sees a group of his fighters heading to Havana in a beautiful 1956 Chrysler Windsor convertible, likely belonging to a friend of ousted dictator Fulgencio Batista. 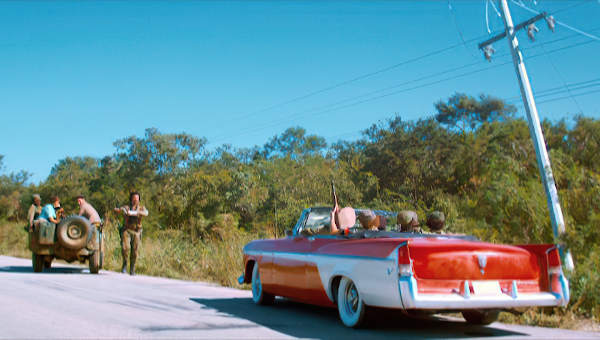 Che tells them in no uncertain terms that taking the car is not appropriate, and that the only acceptable modes of transportation for revolutionaries are bus, Jeep, or foot! Che's Jeep in this scene is possibly an M38. 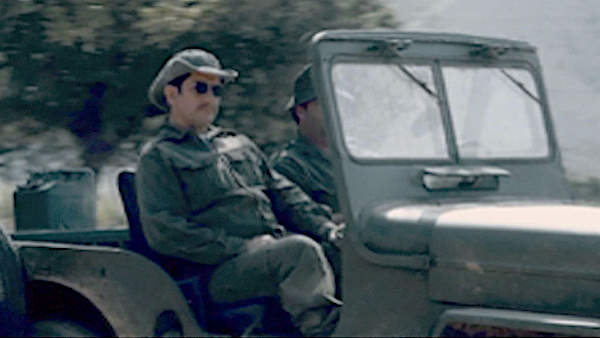 Part Two of Che was shot in Spain, before Part One. The look of this second half of the film is darker and more claustrophobic, and now it's the Bolivian Army, not the revolutionaries, who have the Jeeps. 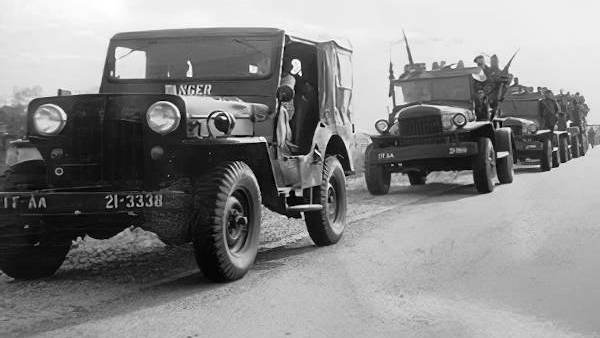 The Bolivian Ranger battalion created specifically to capture Guevara was trained for six months by American Special Forces. These actual photos of the Rangers are courtesy TeleSurTV.net. 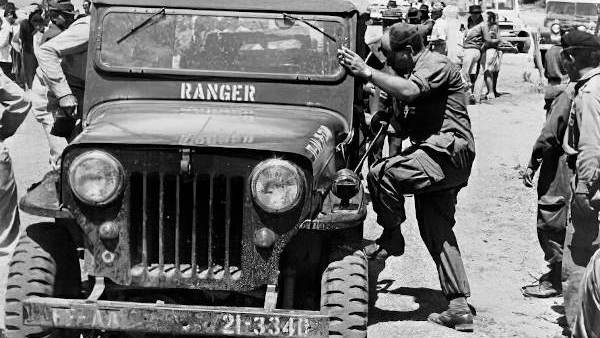 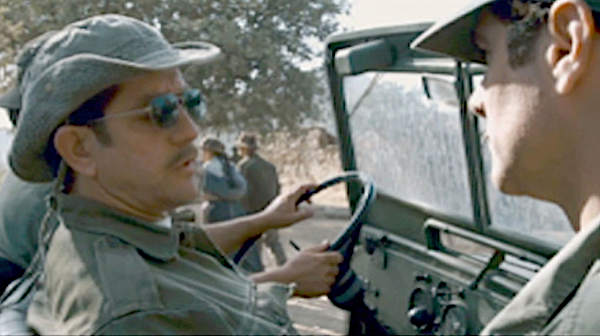 Not surprisingly since Guerilla was shot in Spain, a close look at the Jeeps in the film reveals that they're Spanish-built CJ-3Bs. Again a pretty good match for the real thing, but that might be just a coincidence. 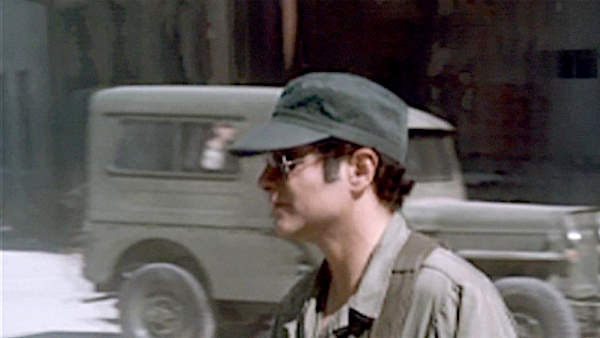 Long-wheelbase Jeeps were built for more than twenty years in Spain (see Room for Sunbathing on CJ3B.info,) and fiberglass hardtops, as spotted on this EBRO Bravo L in the film, were also popular. 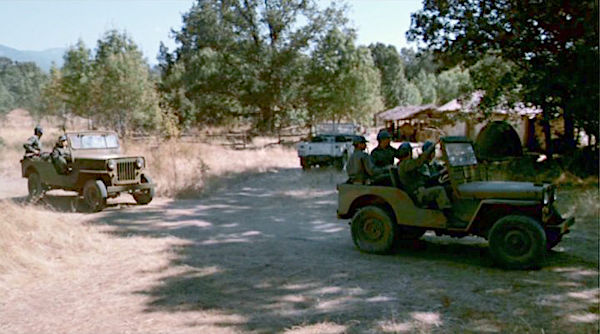 The Jeeps include this long-wheelbase VIASA CJ-3B and a Willys CJ-3A which may be Spanish Army surplus (see Military Jeeps in Spain on CJ3B.info.)

Che was wounded and captured by the Rangers in the village of La Higuera, which has since become a tourist attraction. The following day, 9 October 1967, he was executed, shot in such a way to make it appear he had been killed in action. 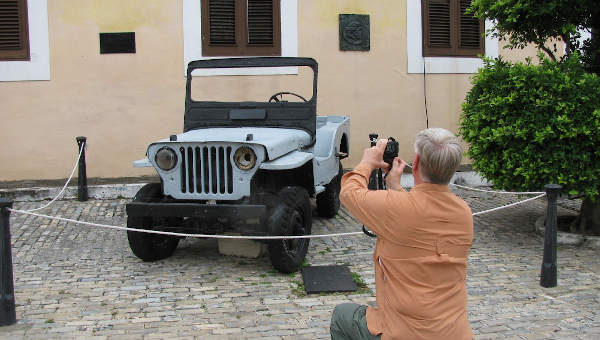 La Cabana de Che Guevara in Havana was briefly Che's family home following the Cuban revolution, and is now a small museum commemorating his life and times. Apparently confirming Che's opinion that the appropriate vehicle for a revolutionary was a Jeep, a CJ-3A reportedly belonging to him has been on display outside the house. This photo is from a 2013 Cuba Trip.


Thanks to Federico Cavedo for spotting the Jeeps in the film. -- Derek Redmond