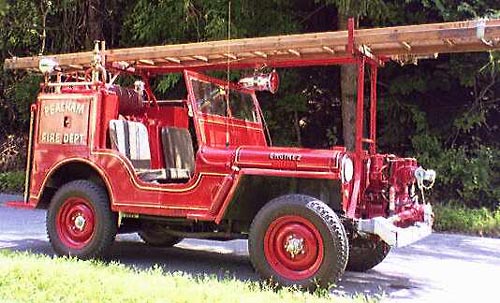 Back in 1950, Chief Gib Randall and the rest of the newly formed Peacham Volunteer Fire Department in Peacham, Vermont, were uncertain whether a 1946 Willys Jeep fire engine which they had their eye on, would be capable of protecting their community.

The little pumper was really aimed at the industrial market -- in Vermont it was the kind of truck used by sawmills. The Chief decided the test would be whether or not its pump could shoot water over Warren Farrington's barn.

The Jeep passed the test, and went into service as Engine 2. 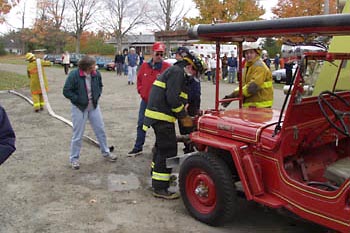 Engine 2 is still in service in Peacham today as a reserve unit.

In September 2001 the Peacham VFD completed a major addition to their firehall, and celebrated with an open house. They decided to re-enact the famous pump test that was required for the purchase of the Jeep. But this time, they intended to pump water over the new addition. Barry Hayes captured the event in photos, starting with the carefully supervised laying and connecting of the hose. 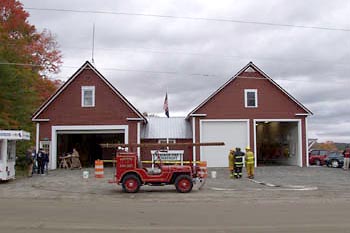 The new addition is on the right in this photo; it's designed to be fully modern and functional, while fitting in nicely with the original firehouse on the left. 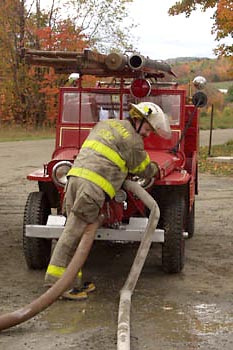 Fire Chief Jeffrey Berwick cranks up the 500 GPM pump as he keeps an eye on the line. 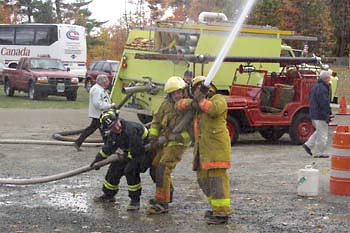 The stream under the control of Firefighter Aaron Morton (nozzleman), Junior Firefighter Steven Kimball, and Firefighter/EMT Ethan Hayes (in black turnouts) has no trouble getting over the roof. The Jeep has a 160-gallon tank, but here it's pumping the water from Peacham's 1977 Ford F800 tanker in the background.

It's a great way to celebrate another historic moment for the department. Warren Farrington would be proud.