Jeep Cherokees in the Fire Service 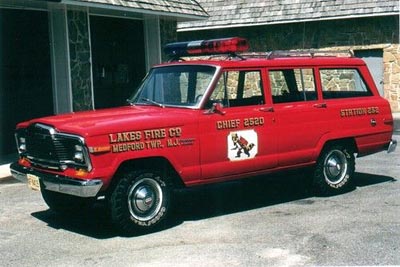 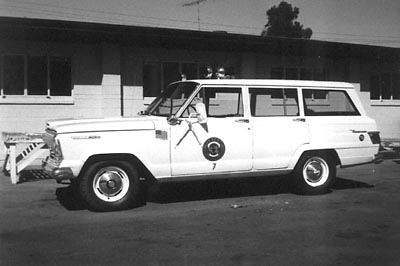 This 1967 Wagoneer was assigned as Car 7 to Battalion 3 at Los Gatos, California, now part of the Santa Clara County Fire Department. This photo from the SCCFD Archive is part of a large collection of historical photos on the department's website, including a variety of cars and pickups from the 1950s and 60's. See also two Jeep M38A1 utility vehicles which served Los Gatos and Santa Clara County. 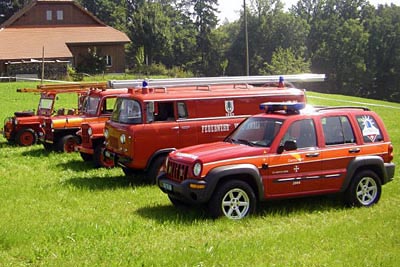 Here's a remarkable photo taken by Markus Hoffman on 30 August 2008 at a Jeep event called Jeeptreffen, at Rothrist, near Basel, Switzerland. As is evident from the badge on the door, the Jeep Liberty was known in Europe as the Cherokee. This one was owned by the Feuerwehr (Fire Department) in the nearby town of Oensingen, who have nicknamed the 2004 Jeep "Remo." (See also a right side view, 72K JPEG.)

Just behind the Liberty is the Vordemwald FC170, but I can't see enough of the other Jeeps to identify them.

Introduced by American Motors in 1984 and produced for nearly two decades, the XJ Cherokee was a widely used command and utility vehicle with police, fire and EMS organizations in North America and in fact around the world. 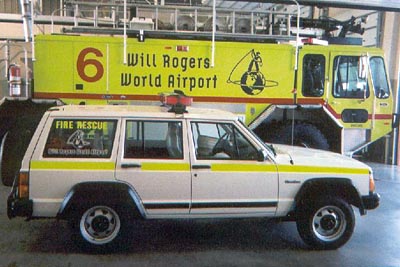 This 1997 Cherokee was photographed alongside the big crash trucks at Will Rogers World Airport in Oklahoma City. WRWA is both a commercial airport and the site of an Air National Guard base. Photo courtesy okcairportfd at yngfire.com. 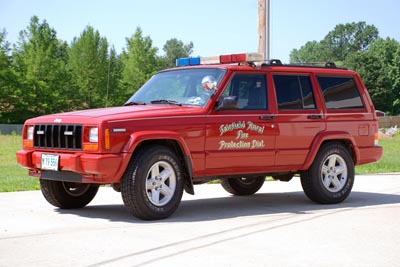 A 2001 XJ serving the Fairfield Rural Fire Department, an all-volunteer department formed in 1984, which protects the area surrounding the City of Fairfield, Illinois. 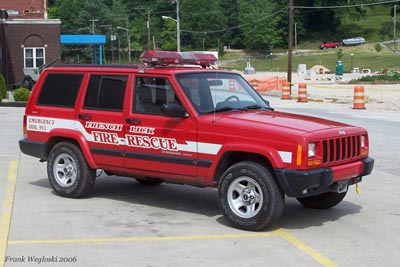 French Lick Fire Deparment in Orange County, Indiana uses this 1998 XJ as Squad 12, an EMS quick-response vehicle. Thanks to Frank Wegloski for the 2006 photo from IndianaFireTrucks.com. 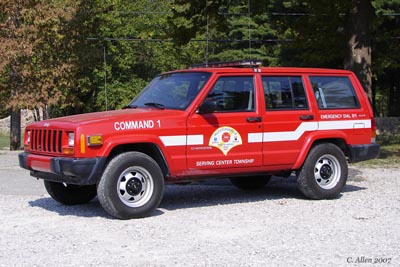 A 1999 Cherokee is Command 1 for the McCutchanville Fire Department in Vanderburgh County, Indiana. Photo by C. Allen, 2007, courtesy IndianaFireTrucks.com. 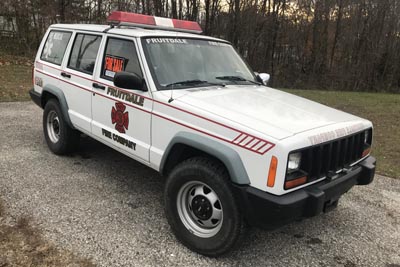 XJs seem to be popular with Indiana fire companies. This Cherokee was sold in late 2018 by the Fruitdale, Indiana Volunteer Fire Department where it had been in service since 2003, covering an area that includes several state forests. 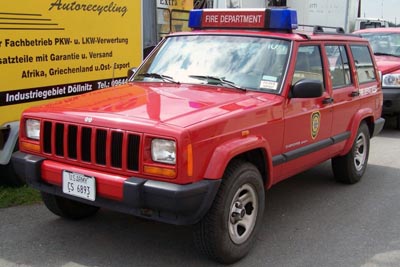 Another overseas photo, but this one is from the fire department at the U.S. Army barracks in Grafenwoehr, Germany, formerly U.S. Army Group Grafenwoehr and now part of USAG Bavaria. Note the logo on the front grille. 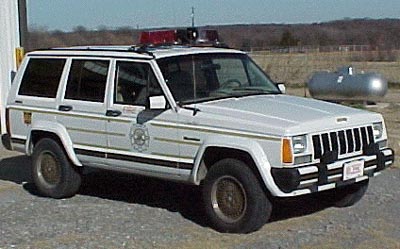 Bill says on the SCVFD website, "When we get a call, the Chief responds to the scene directly from his home. When the firefighters arrive at the station, the Chief radios the size-up, establishes command, and advises which equipment is needed. He then directs the units as they arrive, resulting in a well-conceived, well-coordinated, professional approach. (Yeah, right. That's the theory, anyway.) This unit carries a trauma kit, oxygen kit, blankets, tarps, a 20# ABC fire extinguisher, and the Chief's turnout gear." 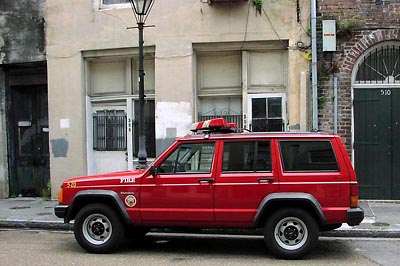 New Orleans is a city filled with history, including the Good Friday fire of 1788 which burned much of the city to the ground, as well as Hurricane Katrina more recently. The volunteer brigade known as the Firemen's Charitable Association was formed in 1829, and evolved into the paid New Orleans Fire Department in 1891. The Department operates a museum in the former Fire House #23, the last fire house to trade in its horses for a motorized vehicle, in the early 1920's. This 2003 photo by Mike Albright nicely captures the juxtaposition of old and new in the famous French Quarter. 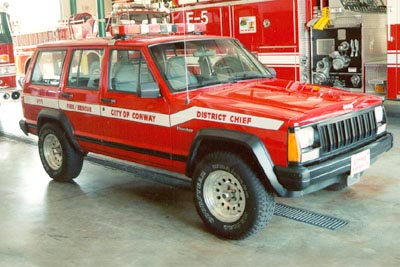 The Conway, Arkansas west sub-station houses this Cherokee which is the city's West District Chief's unit. The west station is also home to Engine 5 and Engine 6, Pierce Sabers with 750 gallon tanks and 1,250 GPM pumps.Photo by Michael Cossey of Internet Engine & Hose. 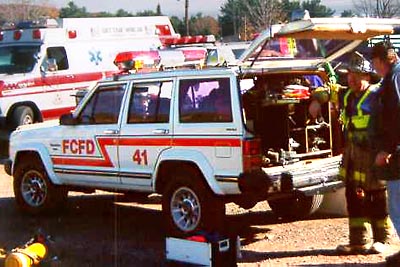 Squad 41 of the Forest City Fire Department in Susquehanna County, Pennsylvania, was a 1985 Jeep Cherokee used as a transport and command vehicle.

This was one of my Suggested Matchbox Cherokees for 2001. 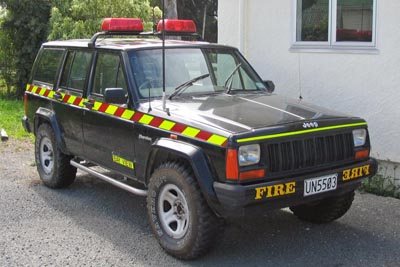 This 1994 Chrysler Jeep was photographed at the Bay View Volunteer Fire Brigade, in the Hawke's Bay region of the North Island of New Zealand.

Photo by Derek Quinn at 111 Emergency. 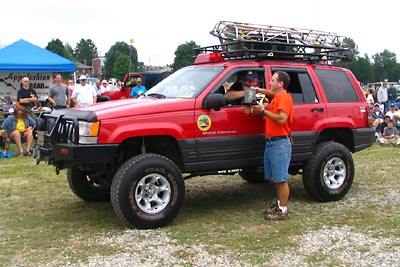 George Aupperlee was a U.S. Navy Corpsman for 20 years and has been a civilian EMT/Paramedic for longer than that. His built-up, EMS-equipped '96 ZJ is on-call for rescue work at Paragon Adventure Park events.

He's seen here picking up a trophy at the 2004 All Breeds Jeep Show organized by PA Jeeps in York, PA. 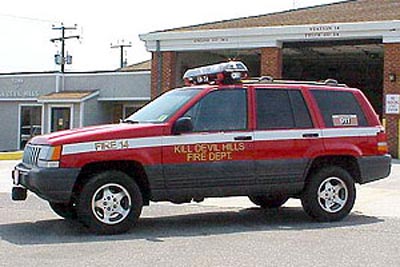 Another Grand Cherokee: Kill Devil Hills in North Carolina ran this 1996 ZJ as a command vehicle. 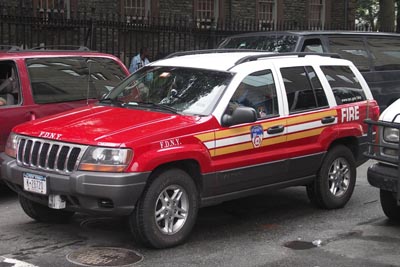 The 2006 photo by Michele Sacco says it all. I don't have any further information on this WJ in FDNY livery in New York City. Photo courtesy of Fiamme Blu.

Thanks to Arleigh Movitz of the Santa Clara County FD, and Ron Richards for the Forest City photo. -- Derek Redmond