Over the past couple of years, Matchbox has released a great series of models based on its 1/58 scale Cherokee Sport casting (see Matchbox 2000 Jeeps and Matchbox 1999 Jeeps). All conceived as vehicles which might have a light bar mounted on the roof, they include an airline pilot transporter, water works maintenance vehicle, animal rescue unit, and Camp Jeep staff car.

Here are some suggestions for more in the series of XJ's: 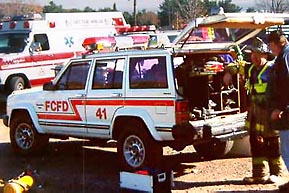 Matchbox has done a couple of Fire Chief Cherokees, but lots of fire departments also employ them for EMS and squad use (see Jeep Cherokees in the Fire Service and Laguna Beach Lifeguards). This one in particular, in Forest City, Pennsylvania, has sharp graphics on white, and a standard red light bar, which would be a nice departure from the previous Matchbox versions in red paint with blue lights (see Jeep Cherokee Fire Service Toys.) 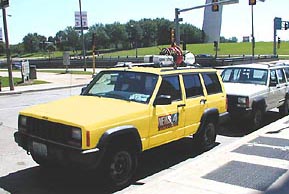 TV news crews all over North America use the Cherokee as a location vehicle: this photo was taken by Mike Albright in St. Louis (see part of the arch in the background). The News4 unit is actually white (70K JPEG), but a Matchbox "Live at 5" XJ could be a flashy yellow and carry an amber light bar, or (better yet) a microwave dish on the roof.

(I've always thought of yellow as the classic Matchbox Jeep color, because of the original Matchbox No.72 yellow CJ-5 (see The Matchbox Jeep Story) -- that's why the background of these pages is yellow.) 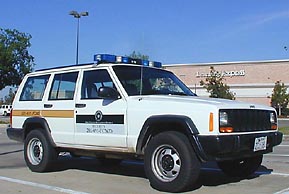 Mike also spotted this security patrol unit at a Texas shopping mall, painted white with graphics which make it look like they picked up a replacement door at the junkyard. But for a private security patrol, Matchbox could choose any color in the spectrum -- or how about a U.S. Secret Service type unit in basic black with red light bar? 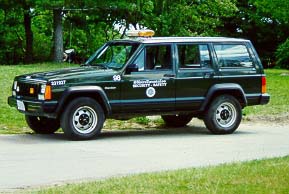 Here's a classy version in dark green -- a "Security and Safety" vehicle at the Metro Toronto Zoo, photographed by Jarek Skonieczny. Come to think of it, a "Zoo Jeeps" 5-pack would be nice.

See also a Chicago Parks Department XJ (60K JPEG) with a two-tone paint job that would be nice, in a photo from Jeep Mud. 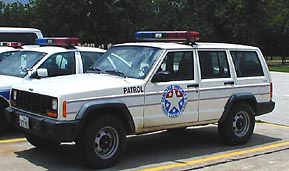 Matchbox hasn't done a police Cherokee, so how about it? That field certainly hasn't been exhausted by the "Sheriff" XJ's from Majorette. This "Constable Precinct 5" patrol unit of Harris County, Texas, has nice graphics. And maybe somebody could figure out how to do a red/blue light bar in miniature without breaking the bank. 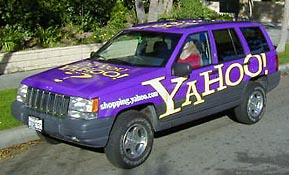 While we're making suggestions here on the Web, why not throw in this idea for a Grand Cherokee? The purple would give Hot Wheels a run for their money on store shelves. Personally, I'd prefer to see something like this rather than the non-prototypical fire and police ZJ's we've seen from some other toy manufacturers. This photo was taken by Bob Davidson in San Diego.

Go to the Toy Jeeps Pages on CJ3B.info.