Here's a vehicle that's not usually included when people list Jeep models, but the 2-1/2 ton ("deuce-and-a-half") 6x6 truck built for the military by Kaiser-Jeep, shares both corporate name and go-anywhere attitude with its smaller contemporary, the 1-1/4 ton M715.

Supplied to the military with various body configurations, the basic chassis was referred to as the M44-series, and also known as the "multifuel" truck because of its diesel engine which was designed to accept kerosene or even gasoline if necessary, as well as diesel fuel. Kaiser built 150,000 of these trucks at the former Studebaker truck plant in South Bend, Indiana, according to a History of AM General. The first contract was in 1964, and production continued into the late 1980's under the ownership of AM General.

Big and little Jeeps: Snohomish Fire and Rescue in Snohomish, Washington calls their 2-1/2 ton "The Beast." Volunteer Eric Melander took this photo of the truck with his 1970 CJ-5: 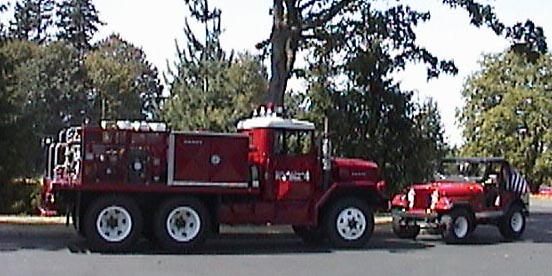 This truck is a 1981 model built by AM General. See also a front view (50K JPEG). The tank and equipment were originally mounted on a 1969 Kaiser which has been taken out of service. 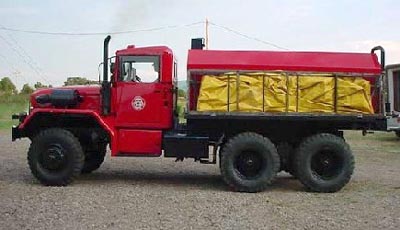 Watalula Fire Department in Franklin County, Arkansas has two 1966 Kaiser trucks: Unit 4 has a 2000-gallon tank and carries a 2000-gallon dump tank. Unit 5 (30K JPEG) is also a 2000-gallon tanker. The trucks were both military surplus dump trucks, which still belong to the U.S. Forestry Commission. The tanks were provided by Watalula and were installed at an Arkansas State prison.

The trucks run well with a top speed of about 50 MPH, but they're loud; the Department uses headphones in the cab for radio communication. A new motor supplied by U.S. Forestry had to be installed in Unit 4, using a backhoe to lift it, and it's reported that it was about all the backhoe could do, to lift the massive motor. 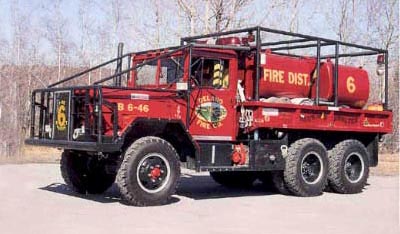 This 1976 2-1/2 ton serves Delano Fire Company No.1 in Delano, Pennsylvania as Brush 6-46, an all-in-one heavy brushfire attack unit. A military surplus truck rebuilt by members of the company, it carries dual 600-gallon water tanks, and three pumps. The steel cage protects the cab and equipment from the heavy brush of the Blue Mountains. 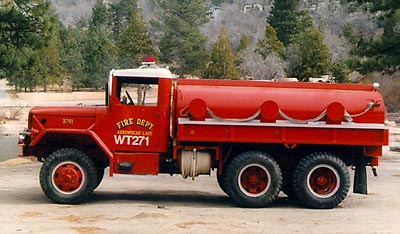 Another Kaiser-built 6x6, this 1969 tanker served the Arrowbear Lake Fire Department in California, protecting the San Bernardino Mountains around Arrowbear. It was retired in the 1990's. 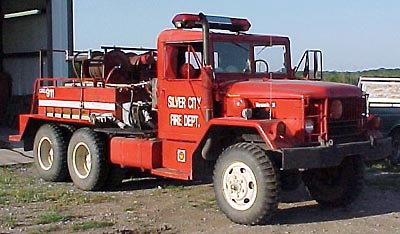 Silver City Volunteer Fire Department in Oklahoma has three Kaiser 6x6's on its roster of apparatus. Assistant Fire Chief Bill Beall says, "There are many of these trucks in service in Oklahoma. We get them from the state Forestry Division. A guy at the Forestry yard at Goldsby, Oklahoma has a bulletin board in his office that is covered with pics of fire trucks that have been made from Forestry-supplied ex-military vehicles."

Unit 302 is a 1966 Kaiser deuce-and-a-half, placed into service in March, 1999. The North West Rogers County Fire Department donated a 600-gallon bed which had been used on one of their trucks, and Silver City asked Forestry for a 6x6 to go under it. They then added a 250 GPM Hale pump. After getting it into service they have been carrying out further improvements including an air-operated power steering kit.

See the military 530B fire truck version of the M-44 at Fire Trucks at War: Vietnam War.