Willys-Overland had a CJ-2 Agrijeep outfitted as a fire engine by American Marsh Pumps in 1945, and I have referred to that as The First Civilian Fire Jeep, although the Willys factory already had a pump-equipped MB fire engine protecting the plant as early as 1943 (see WWII Jeeps as Fire Engines.)

Now it turns out that the American Bantam Car Co. factory in Butler, Pennsylvania, where the very first jeep was built (see On the Trail of Jeep History, Part 2 on CJ3B.info) had three of its own 1941 Bantam Reconnaissance Cars modified as fire apparatus. Some of the photos seen here were discovered in the archives of the Butler County Historical Society in early 2020, by Butlers Standard Eight, a Facebook page covering the automotive history of Butler County PA. They may show the first jeep modified specifically for fire fighting.

The 1941 Bantam BRC-40 seen here has an extended wheelbase, with its custom body riveted rather than welded together, and the rear body dropping down to the sides of a rear step. The "Bantam" name is lettered on the red paint in fire department style. 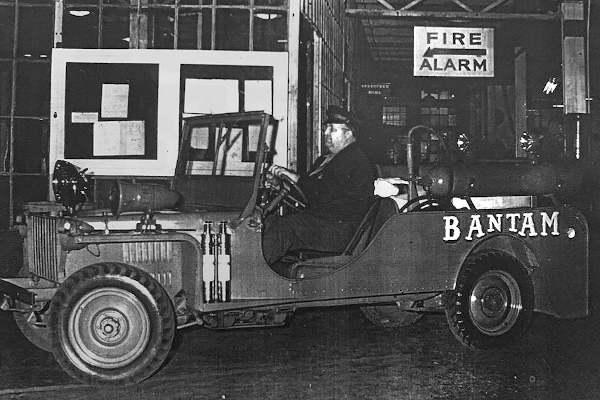 A handwritten note found with the photos indicates that three were built, with one on duty at the factory's loading dock, one in the office area, and one to be assigned where any flammable materials might be in use. There may also have been thought given to the possibility of enemy sabotage, as Bantam built trailers, torpedo motors and landing gear for the rest of the war.

Even in a noisy factory environment, people would have heard this BRC-40 coming, with its massive Sterling siren. 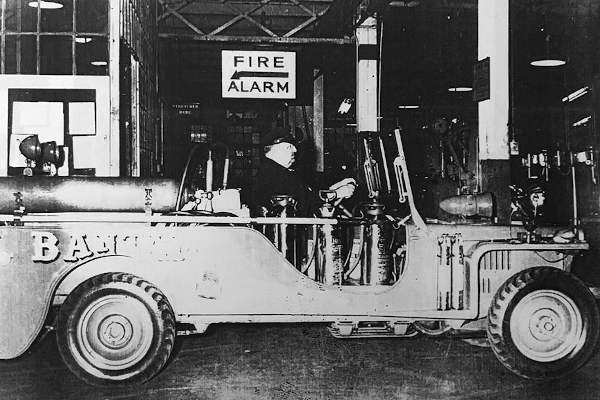 The jeep is equipped with two large carbon dioxide cylinders, each with a coil of hose and a CO2 horn attached, plus a number of water and soda acid extinguishers loaded into the passenger area, and a couple of carbon tetrachloride extinguishers behind each front fender.

The passenger side also has a pike pole mounted, a pocket for carrying an axe, and a large floodlight on the front fender. 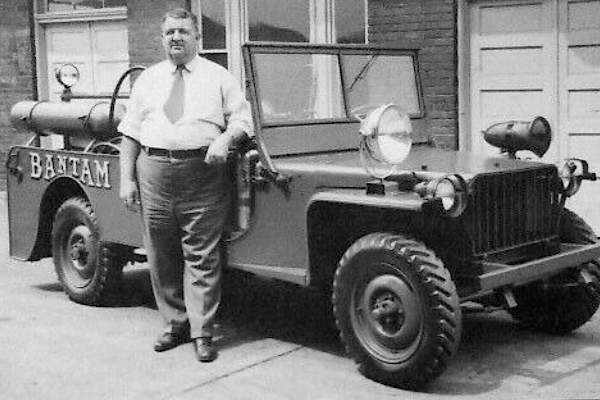 Another photo gives a good look at the floodlight. This may be a different BRC-40, or perhaps the picture was taken before the pike pole, axe holder and carbon tet extinguishers were installed.

The gentleman posing here appears to be the same one driving the vehicle above.

A photocopy of a rear view photo shows what is possibly the third jeep, lacking the floodlights front and back. There appears to be a load of hose in the back, and a nozzle on the back step.

It's unknown how long the jeeps remained in service at the plant, or what happened to them when Bantam American stopped producing jeep trailers and the building was sold in 1956. At least one of them has survived. The Beloit Fire Department in Beloit, Ohio purchased it in 1962 from Amentini Motors in Cleveland (see the Certificate of Title, 200K JPEG.) 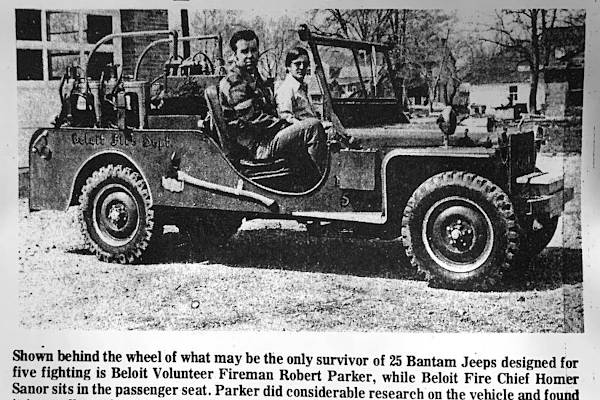 This photo comes from a 1975 newspaper article (330K JPEG) announcing that the Beloit Fire Department was selling the jeep by auction, and summarizing the history of the American Bantam Car Co., owned by Roy Evans.

The photo reveals that the fire company modified the body by cutting it behind the rear wheel to allow for higher ground clearance, and apparently converted the vehicle from 6 to 12 volts, requiring the larger battery to be moved to a battery box behind the front bumper.


Another newspaper photo (160K JPEG) shows the Bantam in a 1974 parade in Beloit, with a water tank and hose reel in the back.

An article from an unknown publication, written some years later by Cathy Cunningham, and titled "The Life and Times of Roy Evans' Fire Truck" (410K JPEG), describes how it was purchased from the Beloit FD by Roy Evans, the former owner of American Bantam and now a car dealer in Florida.

This article repeats the statement attributed to Evans in the 1975 newspaper piece, that 25 of the 2,675 BRCs built were similar fire fighting vehicles, and raises the possibility that another one of them ended up in California. However, it's surprising there would be only one known survivor, if there were originally 25. This also conflicts with the note found in the Butler archives stating that three were built. 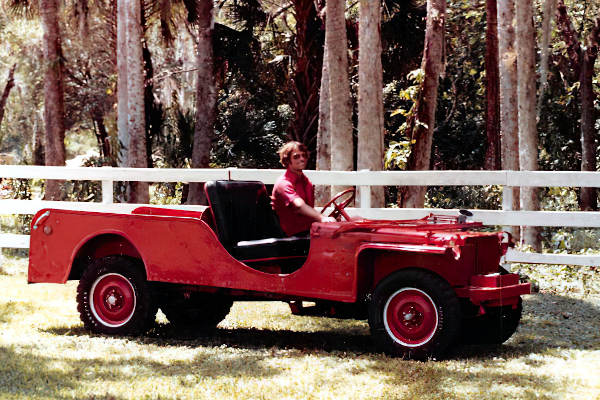 The jeep was soon purchased from Evans by Lamont Johnson (right) who used it as a work vehicle on his property in Florida for the next few decades until his death in 2020. 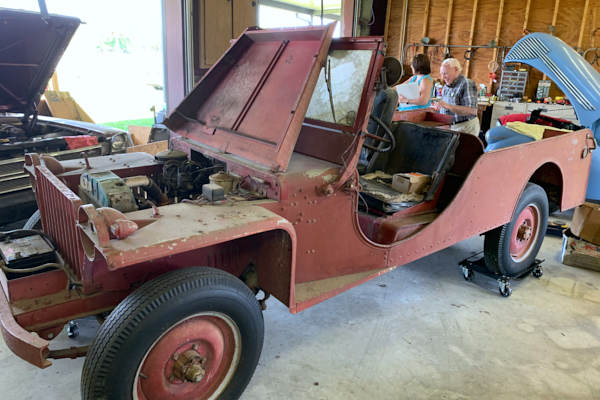 After Lamont Johnson passed away, Bill Ringeisen of Butler PA went to Florida with an interest in purchasing the Bantam on behalf of the Bantam Jeep Heritage Festival and the Butler County Historical Society.

Bill took these photos, including a look at the Continental flathead engine (400K JPEG). 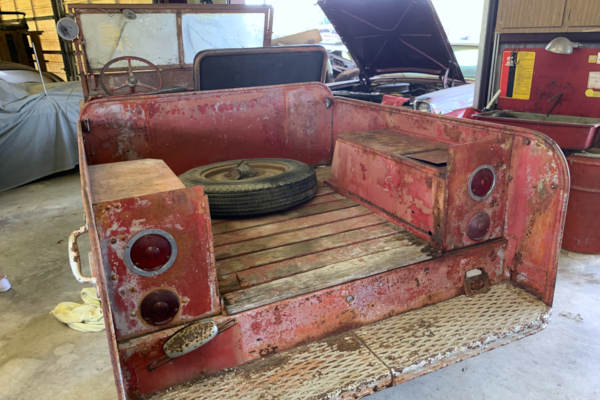 Bill also gives us a good look at the back of the fire truck. The water tank has been removed, but the rear step is still in place. 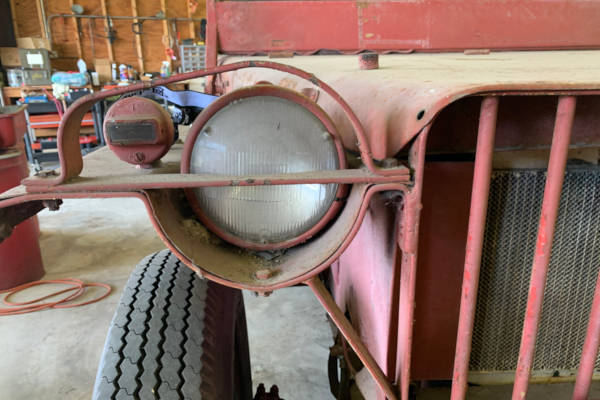 Unique to the Bantam jeeps are the headlights, sunken into the front fenders, with blackout marker lamps. Also distinctive are the Bantam oval gauges (300K JPEG). 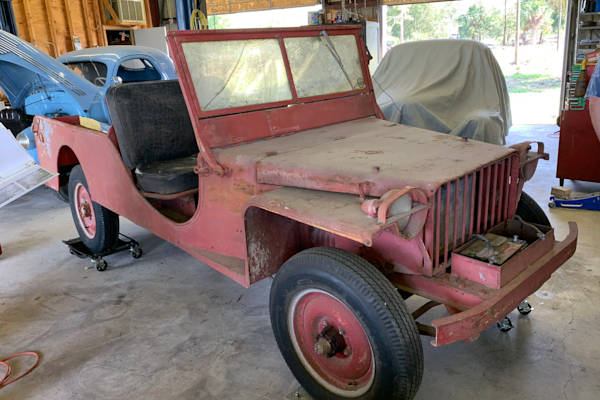 In the end the surviving Bantam fire jeep was sold to a BRC collector in Texas, who has had it restored. 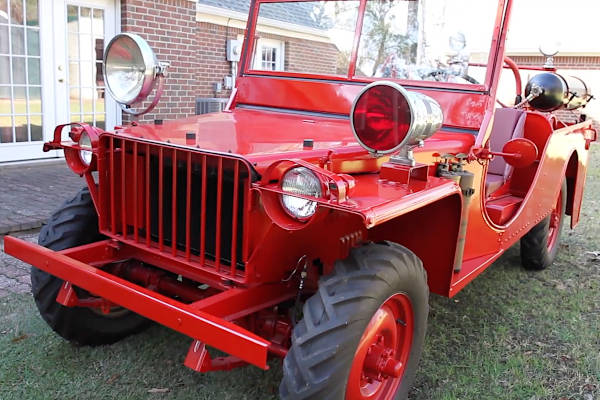 As of January 2022, BRC specialist Duncan Rolls has completed a detailed restoration on the BRC-40, including replacing the lowered rear step and installing appropriate lighting and firefighting equipment. See also the engine compartment (230K JPEG). 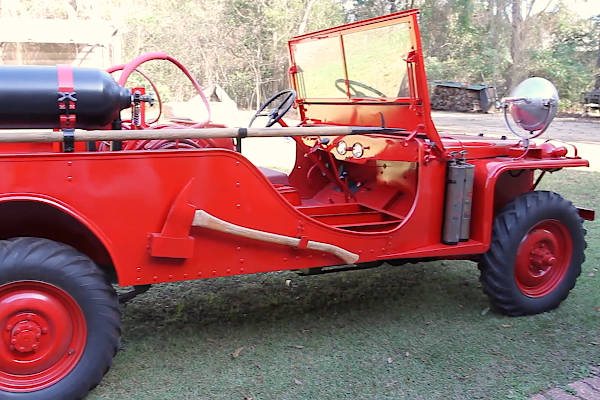 Rolls located the original holes, many of which had been filled, for mounting equipment such as the fire axe. Thanks to BRC historian David Kanally for these photos from his video showing the details of the restoration, on YouTube.


Thanks to Bill Ringeisen, and to Bob Parker, Jim NcNatt and the Beloit Fire Department. Thanks also to the Butler County Historical Society and Butlers Standard Eight. -- Derek Redmond

Last updated 6 May 2022 by Derek Redmond redmond@cj3b.info
https://cj3b.info/Fire/BantamFire.html
All content not credited and previously copyright, is copyright Derek Redmond