Look! Up in the Sky!

In 1958 the United States was getting excited about the coming decade of the sixties, with a wide open race for President after eight years of Ike, and a wide open race to put a man in space following the launch of the USSR's Sputnik I and II in late 1957, and the American satellite Explorer I in early 1958.

In November 1958, Nelson Rockefeller was on vacation at his ranch in Venezuela, after being elected Governor of New York, and he would soon return to the U.S. to start campaigning for the 1960 Republican nomination for President. When you look at the photos below of the confident, Jeep-owning governor, it's tempting to speculate on how the sixties might have been different if Rockefeller had become the nominee in 1960 or when he tried again in 1964 or 1968.

Instead, Nelson Rockefeller eventually became Vice President from 1974-77, when he was appointed by Gerald Ford following the resignation of Richard Nixon. 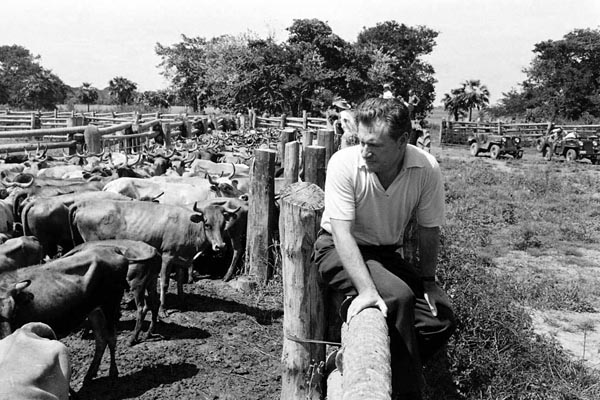 One of Rockefeller's priorities in public life was always international development, and this as well as his Presidential campaign was likely part of the reason for inviting the press to follow him around his Venezuelan ranch in a couple of CJ-3Bs (seen in the background here.)

These photos were taken by Alfred Eisenstaedt for LIFE magazine, but did not appear in the article in the 8 December 1958 issue. 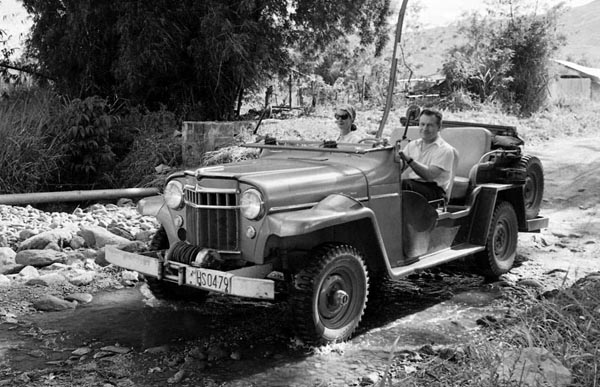 Rockefeller's personal transportation was not one of the lowly 3B's, but this unique, custom-built 4WD roadster which appears to have been based on a 1956 Willys 6-226 chassis. 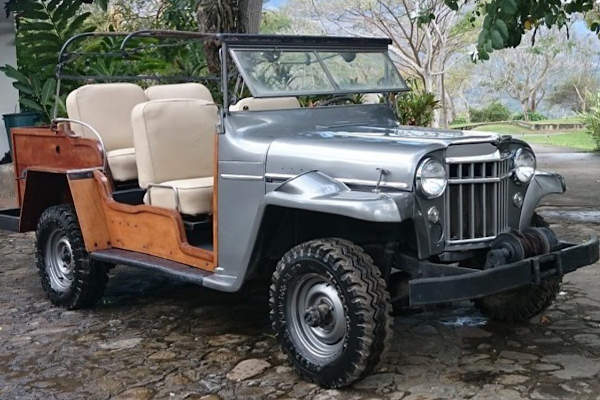 The Willys has turned up in 2020, in near-perfect condition in Venezuela, and it may be headed for sale in the U.S.

Apparently there is nobody still around who knows the purpose of the bulges on the front fenders, but they may have been intended to hold rifle scabbards. 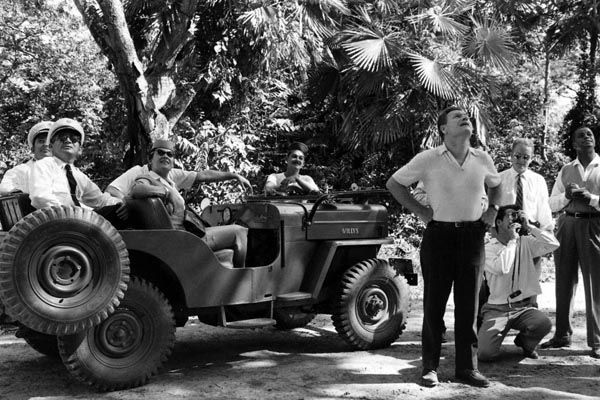 We get a good look at a '57 or '58 CJ-3B in this shot of Rockefeller with the press and what appears to be a flight crew of pilots and stewardess in the Jeep. It's not clear what they're looking at in the sky -- maybe an airplane, or even a hot air balloon? 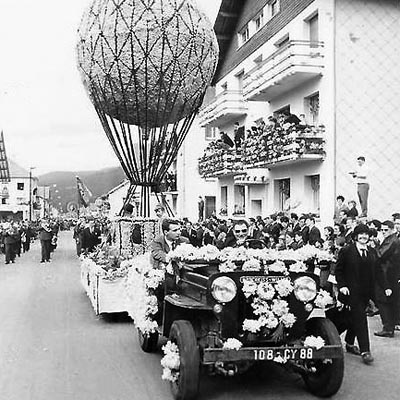 A balloon is the center of attention in this undated photo of a parade in Gerardmer, France, probably in the late 1950s or early '60's. The float is pulled by a French-built CJ-3B, more specifically a Hotchkiss-Willys JH-101, built between 1955 and 1960.

It's too bad this photo is black & white, because this is Gerardmer's annual Fête des jonquilles (Daffodil Festival) which is noted mainly for acres of yellow daffodils covering every possible surface. 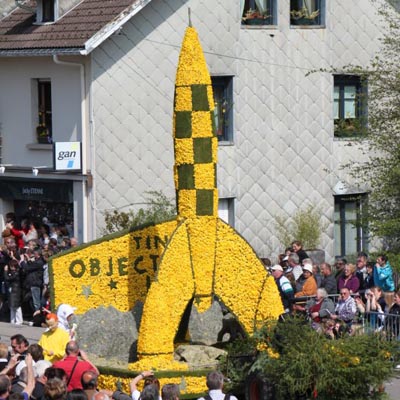 For example, a float in the 2011 Festival parade is seen here in color (photo courtesy Anna Reck.) The float is a daffodil-covered reproduction of the famous moon rocket from the Tintin comic Objectif Lune ("Destination Moon"), the sixteenth volume of The Adventures of Tintin comics series by Belgian cartoonist Hergé. The beloved story was published in book form in French in 1953, and the English version appeared in 1959. 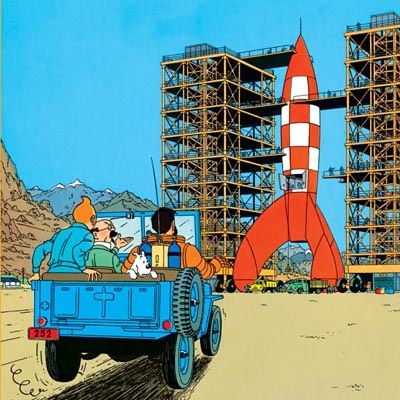 In Objectif Lune, Tintin and his friend Captain Haddock receive an invitation from Professor Calculus to come to Syldavia, where Calculus is working on a top-secret project to plan a manned mission to the Moon. Hergé apparently did extensive research before drawing what he thought a moon rocket might eventually look like. The story also features an accurately-drawn CJ-2A in an important supporting role (130K JPEG). 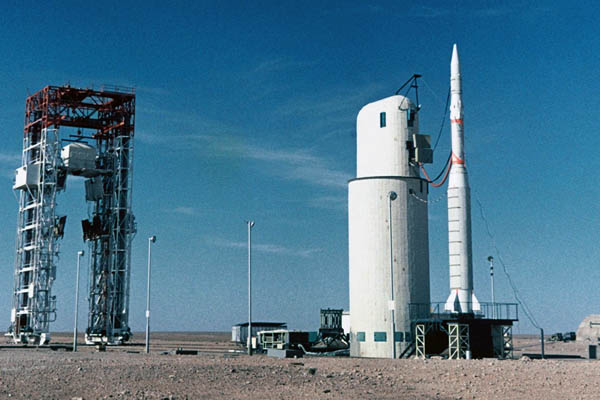 France's actual rocket launching site was in the desert at Hammaguir, Algeria. It was here at the "Brigitte" launch pad that France became the third nation to enter the space race when it launched a Diamant rocket carrying the "Astérix I" satellite in 1965.

A Jeep is visible in the distant backgound of the picture. Photo courtesy of Sven Grahn. 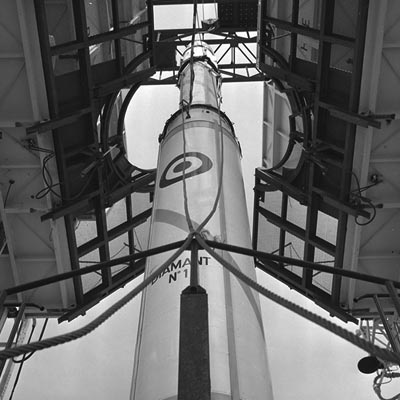 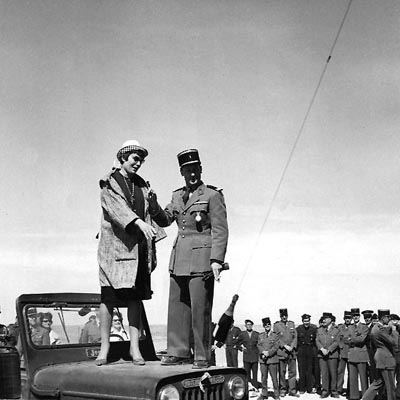 The French military Hotchkiss-Willys Jeeps at Hammaguir did get their closeup photos, when they were used as platforms for the launching of champagne bottles, presumably to christen the latest rocket on the launch pad.

These two photos, showing two different Jeeps, are both dated 1965, so it seems likely that one of them is the christening of Diamant No.1, carrying the historic French satellite. (Click the photo above to see its original non-animated version.) 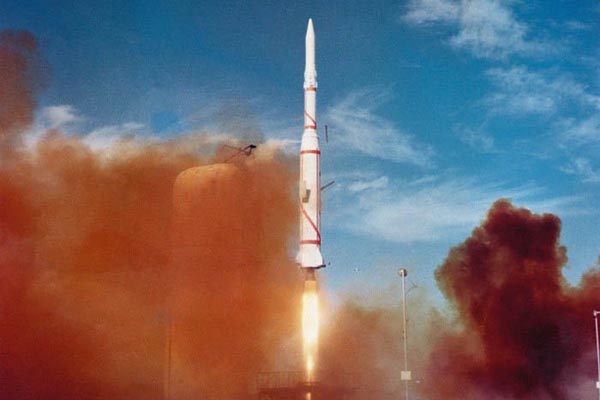 Diamant No.1 blasted off with Astérix I on 26 November 1965, and the rocket's second stage dropped into the Mediterranean off the Tunisian coast.

The Brigitte rocket facility was closed in 1967 as part of the agreement for Algeria's independence from France. Thanks to ECPAD for the photos. 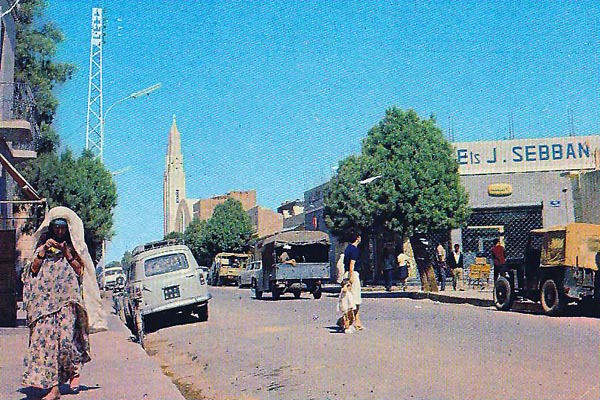 A couple of hours drive northeast of Hammaguir was the district capital of Bechar, a recreation destination for the French military personnel. This postcard of Bechar's main street features a couple of Jeeps, and what almost appears to be another rocket, but is actually the church known as Notre Dame de la Saoura ("Our Lady of the Sahara"). 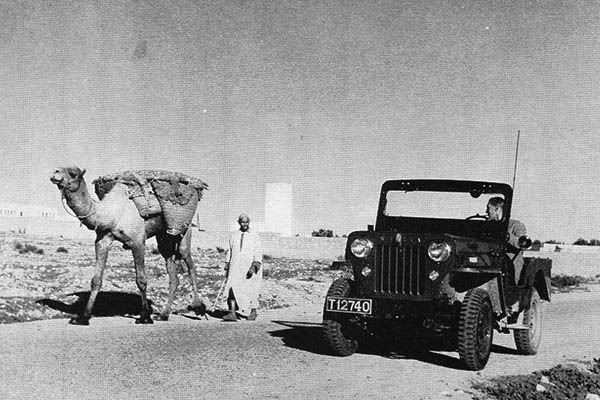 This photo of a Willys CJ-3B in an unknown location in the Sahara, was published in the Willys News in June 1957, with a caption supplying little information except that the camel driver was envious of the Jeep. 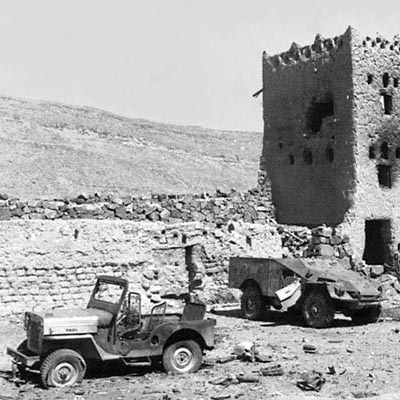 During much of the 1960s, Egypt was involved in what became known as Egypt's equivalent of the Vietnam War -- the North Yemen Civil War, on the Arabian peninsula. This photo reportedly shows the aftermath of an engagement in which Egyptian troops unsuccessfully defended this building against rebels supported by Saudi Arabia. See the full photo (190K JPEG) taken in Yemen circa 1963, courtesy of journalist Vicente Talon Ortiz.

The armored car is a Soviet-built BTR-40; most Egyptian military equipment after 1955 came from the USSR. The burnt-out Willys CJ-3B is more of a mystery. The seat frames would suggest late 50's, or very early 60's before the WILLYS stampings disappeared from the hood. Did Egypt continue to receive Jeeps from the US as they played for aid from both Cold War superpowers, or was this a vehicle supplied to the rebels by the Saudis? The unburned front of the Jeep actually appears to be in civilian paint. 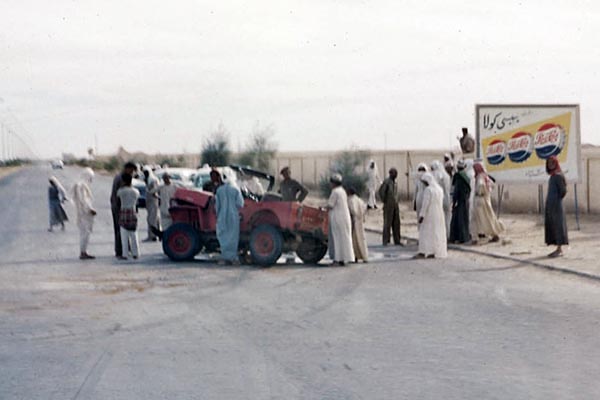 And did this Jeep have a disagreement with a camel? The picture was snapped from inside a Dodge Power Wagon in Riyadh, Saudi Arabia in August 1960, by Keith Wheeler who was assigned by the U.S. Army to the U.S. Military Training Mission to Saudi Arabia at the time.

Keith comments, "The picture was taken 'on the fly' and definitely not an approved photo at the time. We had to be very careful of such situations." 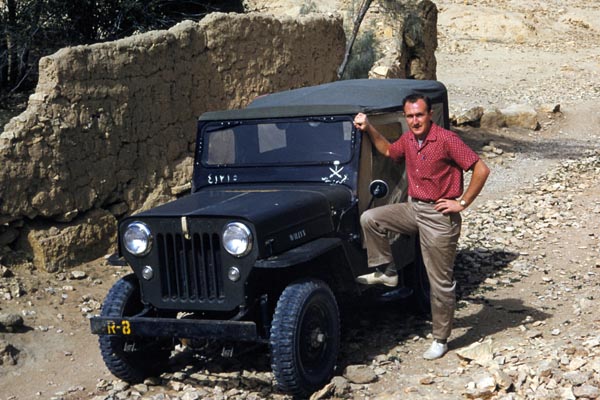 Here Keith poses beside a Jeep used by the Training Mission, during an excursion to the ruins of Diriyah, the ancient home of Saudi royalty (which was declared a UNESCO World Heritage Site in 2010.)

He adds, "A usual practice was for us to give military hardware to the Saudi government so that we could use it. On the Jeep, the upturned tips of the swords were an important Saudi military symbol of the time that would let local folks know that while we were foreign military personnel we were in their country with the approval of the King." 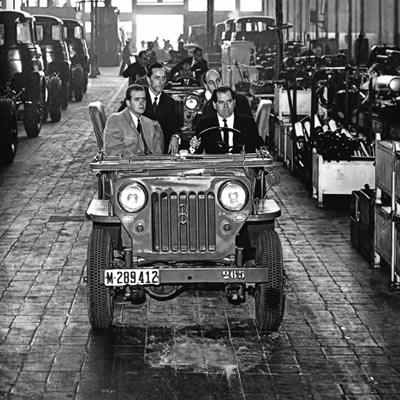 Speaking of Jeeps and royalty, this is Spain's Prince Juan Carlos visiting the Barreiros Diesel factory in Madrid in February 1964. The company was founded in 1954 by Eduardo Barreiros (driving the Jeep here) to produce diesel engines initially based on the Perkins diesel (which wasn't patented in Spain.) The engines were used in vehicles including VIASA Jeeps, and Barreiros also began building their own trucks and cars. (Wikipedia)

The Prince became King Juan Carlos I in 1975, and abdicated in favor of his son Felipe VI in 2014. 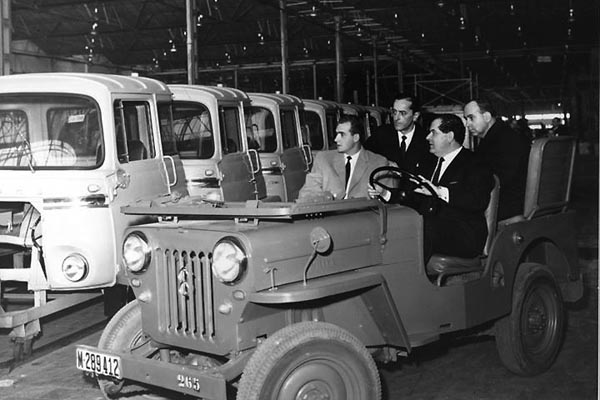 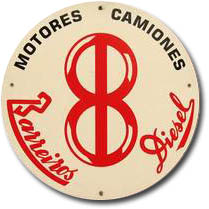 What looks like a chromed figure 8 on the front of the Jeep is actually the Barreiros "EB" logo, representing the initials of the founder, who presumably wanted to indicate the diesel power under the hood of the Willys-Viasa CJ3. 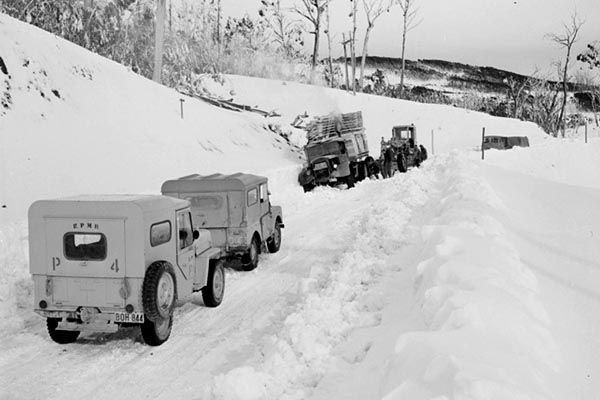 A Jeep and a Land Rover wait for a truck to be pulled out of the ditch during construction of the massive Snowy Mountains hydroelectric project in southeastern Australia, which included sixteen dams built between 1949 and 1974. (Wikipedia) The Jeep is lettered for "KPMR", possibly a contractor working on the project.

The photo was taken in 1958 on the road up to company town Cabramurra. Photo courtesy Australian National Archives. Thanks to Mick Broomfield and Willys Australia. 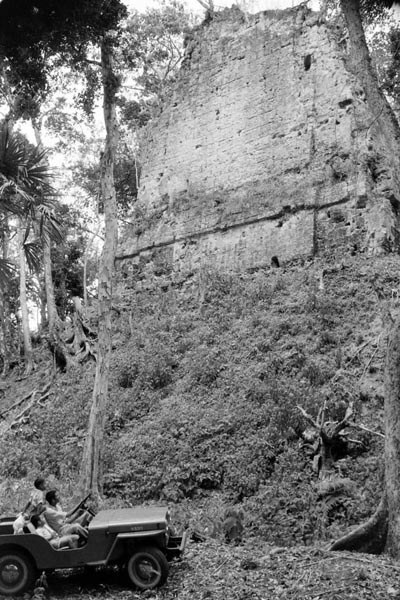 Also in 1958 but half a planet away, archaeologists in Jeeps including this DJ-3A were exploring the ruins of Tikal in the Guatemalan rain forest.

Tikal (which was named a UNESCO World Heritage Site in 1979) was the capital of a powerful Mayan kingdom, under a royal family with some 33 rulers between about 90 AD and 900 AD. It is now known to have covered more than 16 square kilometres (6 sq. mi.) and included about 3,000 structures, with causeways spanning swampy areas. (Wikipedia)

The archaeological discoveries as of 1958 were described in LIFE magazine's 13 October 1958 issue. 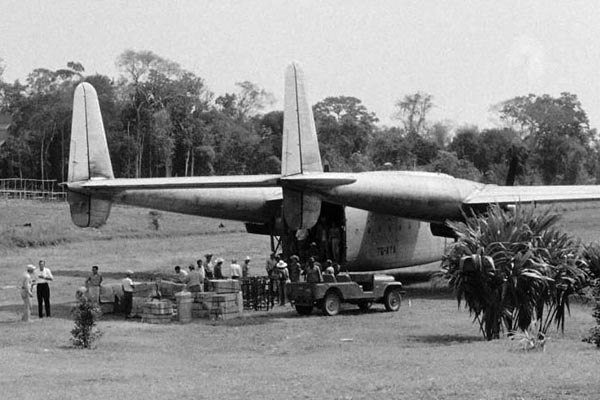 Photographer Fritz Goro also took some shots of the Flying Boxcar the scientists' equipment arrived in, including this CJ-6. But surprisingly, there were no CJ-3Bs in evidence at Tikal, and the two-wheel drive DJ-3A (160K JPEG) seems like a strange choice for the rain forest.

(Also on CJ3B.info, see more on Jeeps and Flying Boxcars.)


Well, that's a little tour of some spots around the planet where things were happening in the 1950s and 60's. Whether it was space exploration, archaeology, farming or industry, the vehicle helping out was often a Jeep, and often it was a CJ-3B, which I call "the world's Jeep."

Thanks to Federico Cavedo for finding a great collection of photos, and to Leif Hellström. Thanks also to the LIFE photo archive. -- Derek Redmond

Last updated 31 May 2020 by Derek Redmond redmond@cj3b.info
https://cj3b.info/Finds/FindsFederico2.html
All content not credited and previously copyright, is copyright Derek Redmond