The Fire Truck in the Tintin Book

For those in North America who may not be familiar with Tintin, he is the young Belgian reporter who was the hero of a series of comic book adventures which started in 1929, and continued until the death of the author Hergé in 1983. The stories are mysteries, combined with political satire, science fiction and humor. A total of over 200 million copies of 24 books have been sold worldwide. Read more about The Adventures of Tintin at Wikipedia.

Although Tintin himself never seemed to age, one of the many appealing aspects of Hergé's clean, detailed artwork was his accurate depiction of vehicles throughout the half century. 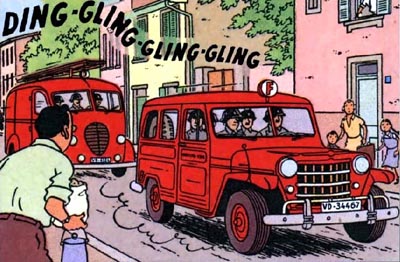 In 1956, Hergé made one of his many trips to Switzerland. During this visit, he met firefighters in Nyon and asked permission to draw their vehicles for the next Tintin book, The Calculus Affair (original French title L'Affaire Tournesol).

In the book, Tintin and his friend Captain Haddock arrive at Route de St-Cergue 113 (a house which still exists) to visit Professor Calculus. Moments later the house explodes, and the fire brigade responds in their 1953 Jeep and a pumper (which no longer survives.) 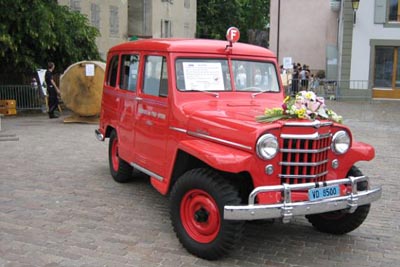 The Willys entered service in Nyon on 21 August 1953, with its first call to a fuel depot fire on 27 August. It served as a response vehicle until 1992 when it was purchased by the Association of Firefighters of Nyon. During its later years of service the "F" identification lamp had been replaced by a standard blue beacon (100K JPEG). The Association, knowing the worldwide interest in the vehicle, restored the Jeep to its original appearance. 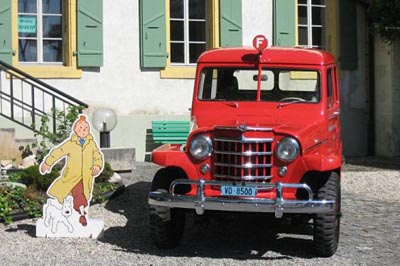 One of the many occasions when the Association has put the Willys on display was a May 2007 event celebrating "The Footsteps of Tintin and Calculus in Nyon" at the Museum of Léman.

The cover of The Calculus Affair shows Tintin, Calculus and Haddock, along with Tintin's faithful dog Snowy.

In The Design of Tintin, Jonathan Howells says, "The covers alone (before I even opened the books) got my heart racing. Just looking at one, I knew this was going to be a good episode. While lapping up the colourful pages, I was (we all were) exposed to the designed objects of the day, and the obsessive attention to detail Hergé and his artists paid to these designs, whether they be rockets, boats, planes, trains or cars. The amazing site Tin TIn's Cars by François de Dardel, lovingly celebrates Hergé's attention to car design. Amazingly, de Dardel actually identifies all of the vehicles (153 of them apparently) in each and every Tintin episode." 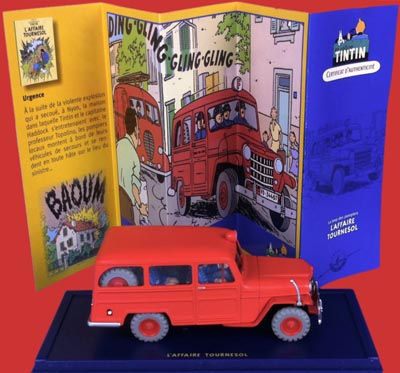 Many of the Tintin vehicles have been reproduced in a series of 1/43-scale models from Atlas Editions, and the Willys is No. 57 in the series. It features the four pompiers figures and the spare tire, exactly as seen in the book. Included in the packaging (80K JPEG) is an illustrated "Certificate of Authenticity" and a plastic display case.

See also some other Tintin Jeeps in Cartoon Jeep Toys on CJ3B.info.

Thanks to the firefighters in Nyon, and to Michael Voogd for the in-service photo. -- Derek Redmond

Elsewhere on the web, see a page in French with Hergé's original sketches of the fire, and see the official Tintin website at Tintin.com.