Yael Dayan in the LIFE Archive

The woman at the wheel below is Yael Dayan, and she made such an impression on photographer Paul Schutzer that he apparently fell in love with his subject. The photos were found by Federico Cavedo in the LIFE photo archive of more than 10 million pictures at LIFE.com. See other acknowledgements and footnotes at the bottom of the page. 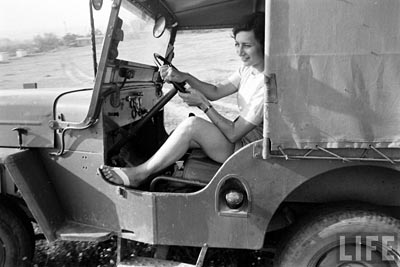 Yaël Dayan (hear it(1)) was a fiery young Israeli Army officer, writer and feminist, when she was profiled for LIFE by photographer Paul Schutzer in 1959. He took a lot of photos of her in a Jeep, but only one was included in the LIFE article (90K JPEG). The caption said she claimed to be "the best Jeep driver in Israel," but "friends consider her a notorious chance-taker." 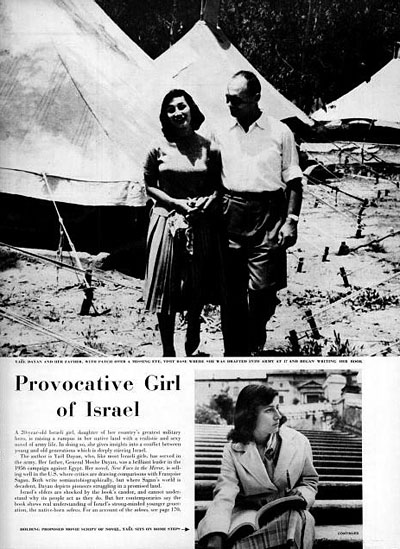 The first photo in the LIFE article shows Yael with her father, Gen. Moshe Dayan.

The text of the article begins:

"A 20-year-old Israeli girl, daughter of her country's greatest military hero, is raising a rumpus in her native land with a realistic and sexy novel of army life. In doing so, she gives insights into a conflict between young and old generations which is deeply stirring Israel.

"The author is Yaël Dayan, who, like most Israeli girls, has served in the army. Her father, Genral Moshe Dayan, was a brilliant leader in the 1956 campaign against Egypt. Her novel, New Face in the Mirror... depicts pioneers struggling in a promised land." 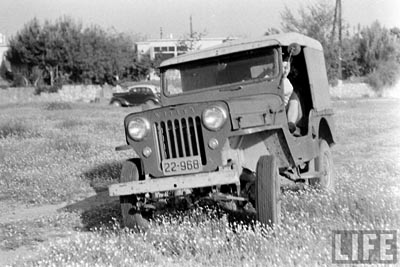 Among the unpublished photos: Dayan still has her foot up on the door opening as she takes the Jeep for a spin in an open field.

A side view photo (130K JPEG) of the civilian CJ-3B reveals interesting details including locking hubs on the rear wheels, and sheet metal sunshade and roof, with canvas side curtains. The side rear view mirror has been moved up to the windshield, and the Jeep likely dates from 1953-54 when most Israeli CJ-3Bs were assembled.(2) 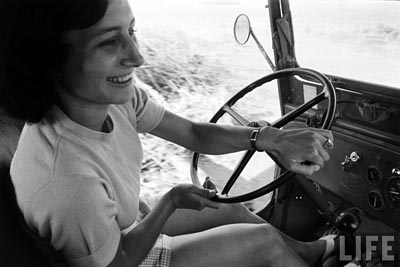 Paul Schutzer climbed into the Jeep for a series of wonderful close-ups of Dayan, full of joy as she spins the steering wheel. This photo wasn't posed; check out the ignition keys swinging in the large copy of the photo. Was this the moment when Schutzer realized he was photographing somebody very special? 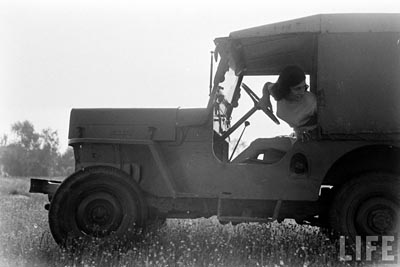 There are a lot of photos; Schutzer kept shooting even when Dayan was putting the Jeep into reverse. 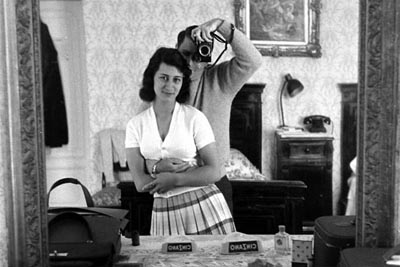 Research by Ben Atlas(3) into Paul Schutzer's massive archive of LIFE photos, has found a huge number of pictures of Yael Dayan, and some of Paul and Yael together, suggesting he was in love with her. 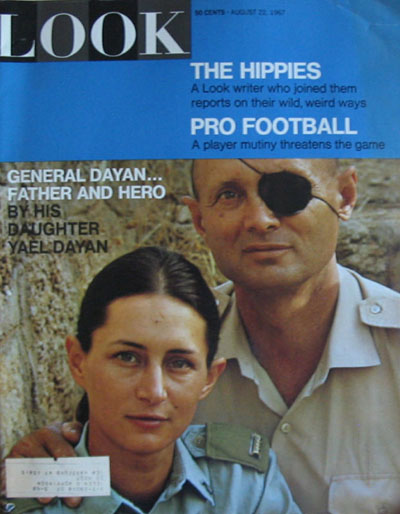 Whatever happened between the young woman and the photographer, it didn't last long. Between 1959 and 1967, Dayan reportedly lived with Michael Cacoyannis, the Greek filmmaker from Cyprus best known for his 1964 film Zorba the Greek.(4)

In 1967, father and daughter would both be on active duty again, in the Six Day War. LOOK magazine perhaps outbid LIFE for the rights to Yael Dayan's account of going to war with her father, which was published in LOOK, 22 August 1967. Dayan also published a book called Israel Journal: June, 1967 (40K JPEG).(5)

Yael Dayan wrote a total of eight books, and become one of Israel's most prominent activists for peace and women's rights. She was a member of Israel's legislature, the Knesset, between 1992 and 2003, and later Chair of the Tel Aviv city council.(6) A 2001 photo (30K JPEG) was taken by Michael Collopy. 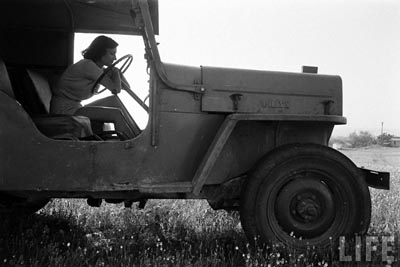 Paul Schutzer went on to take many historic and evocative photos. He was killed while embedded with an Israeli armored column on the first day of the Six Day War, at the age of 36. Shortly after he shot a photo of the tank ahead of him taking a direct hit, the halftrack he was riding in was also hit. His final roll of film was found in his camera.

Thanks to Federico Cavedo, Luis Mariano Paz and Ben Atlas for finding the pictures in the LIFE archive at LIFE.com. -- Derek Redmond