Two characters, very different but both controversial, were photographed for LIFE magazine during 1958-59 with their leg sticking out of a CJ-3B Jeep, a perfect pose to demonstrate their confidence and independence of spirit. In the case of Yael Dayan (see Jeep Spirit on CJ3B.info) the photographer fell in love with his subject.

In the case of Ezra Taft Benson, someone at LIFE decided that the old-fashioned values of Eisenhower's right-wing Secretary of Agriculture were perhaps better symbolized by showing him on horseback, and the Jeep photos were not published. But they were found by Federico Cavedo in the LIFE photo archive of more than 10 million pictures at LIFE.com. See footnotes at the bottom of the page. 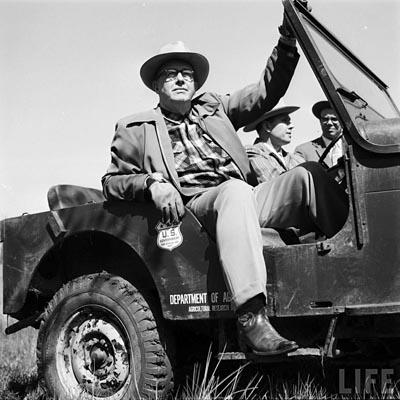 Ezra Taft Benson was a farmer and religious leader, who served as U.S. Secretary of Agriculture from 1953-1961, and later President of The Church of Jesus Christ of Latter-day Saints, from 1985 until his death in 1994.

Born on a farm in Idaho in 1899, he was the oldest of eleven children in a Mormon family. He studied at Brigham Young and Iowa State University, then ran the family farm, became a county agriculture agent, and founded a farmers' cooperative. In 1939 he moved to Washington with the National Council of Farmer Cooperatives, and in 1953 was appointed Secretary of Agriculture by President Eisenhower.(1) 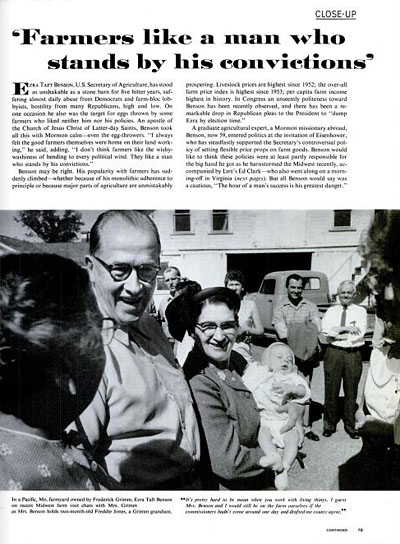 The Benson "Close-Up" by photographer Edward Clark appeared in LIFE on 2 June 1958.(2) The cover story that week was about Gen. Charles De Gaulle and the situation in France and Algeria.(See a summary of that history on CJ3B.info, in The Blue Caps: French Jeeps in Algeria, 1957.)

Some of the text of the article: "Benson... has stood as unshakable as a stone house for five bitter years, suffering almost daily abuse from Democrats... and hostility from many Republicans, high and low. On one occasion he was also the target for eggs thrown by farmers. Benson took all this with Mormon calm -- even the egg-throwers. 'I always felt the good farmers themselves were home on their land working,' he said, adding, 'I don't think farmers like the wishy-washiness of bending to every political wind. They like a man who stands by his convictions.'

"Benson may be right. His popularity with farmers has suddeny climbed -- whether because of his monolithic adherence to principle or because major parts of agriculture are unmistakably prospering. Livestock prices are highest since 1952... and there has been a remarkable drop in Republican pleas to 'dump Ezra by election time.'" 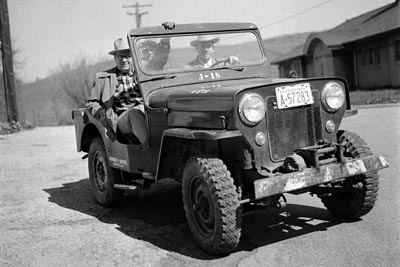 On a tour of the Midwest, Benson was photographed by Ed Clark in an unidentified location, riding in a USDA CJ-3B, perhaps on loan to another agency, judging from the "CPA" and "J-18" stencilled on the Jeep.

Benson opposed the system of government price supports and aid to farmers which he was entrusted by Eisenhower to administer, arguing that it amounted to socialism. But he survived in his cabinet position for all eight years of the presidency. He was selected as the administrator of the Emergency Food Agency, part of a secret group that became known as the Eisenhower Ten, created to serve in the event of a national emergency.(4) 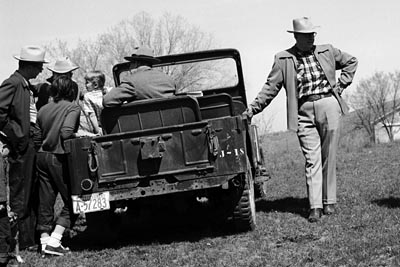 Benson was an outspoken opponent of communism and socialism, and supporter, although not a member, of the John Birch Society, which he praised as "the most effective non-church organization in our fight against creeping socialism and Godless Communism."(5) He published a 1966 pamphlet entitled Civil Rights, Tool of Communist Deception.(6) 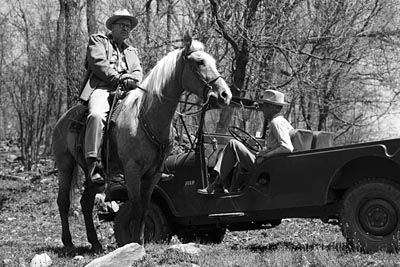 Photos of Benson on horseback at a ranch in Virginia included a shot of a CJ-6 belonging to the ranch.

Benson told LIFE, "I frequently have a hankering to get out close to growing things. I think a man has to get away from Washington if he is going to keep his perspective. I like to take a hard ride in a good old Western saddle. I used to ride the range out near my father's place in Idaho where I was born." 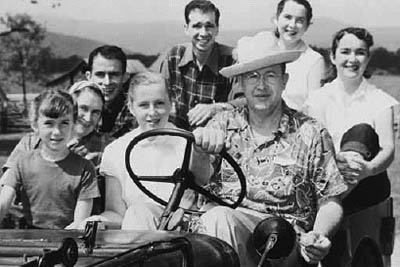 Ezra Taft Benson may have also owned a Jeep himself. A photo published by the Latter-Day Saints Church shows him with his wife Flora (also seen in the LIFE article above) and his children, driving what appears to be a Jeep with a ventilating windshield.(7)

Despite his confidence and success, Benson is a reminder that there were dark sides to life in the 1950s. But he was definitely a character who displayed that go-anywhere, do-anything Jeep spirit.

Thanks to Federico for finding the pictures in the LIFE archive at LIFE.com. -- Derek Redmond