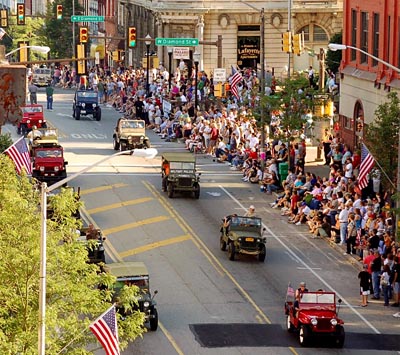 The first annual Bantam Jeep Heritage Festival was held in Butler, Pennsylvania on 12-14 August 2011, to celebrate the "Birthplace of the Jeep." In 1940, Butler's American Bantam Car Company developed and produced the Bantam Pilot Model in response to the U.S. Army's request for an all-purpose military vehicle, and nearly 3,000 jeeps were produced at Bantam's factory during 1940-41.

Festival organizers decided that one of their events would be an attempt to break the record set in Colombia in 2006 for the world's longest Jeep parade. 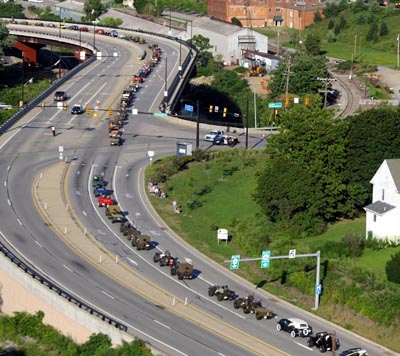 Well, the record was broken handily. The organizers reported that 1,106 Jeeps of all makes and models rode from Butler Community College on Route 8 to the heart of downtown Butler, led by a group of original Bantam jeeps (200K JPEG).

For the parade to be an official Guinness event, each Jeep owner had to supply car registration, driver's license, and a photo. Official Guinness representatives counted the vehicles as they passed by, but as of this writing the new record has not yet been confirmed.

Thanks to Bob Brandon and Butler County Tourism for these aerial photos. 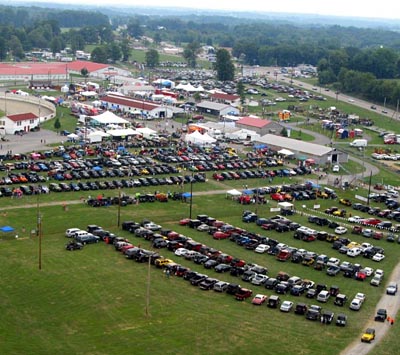 Bob Christy took his CJ-3B to the Festival, and here's his report:

"We got to Butler on Saturday around 2 P.M. due to working until noon. It was a quick drive into Pennsylvania and the fairground was very easy to find. Parking was great and we were guided right to the trailer parking area. I unloaded and found my reserved (by my buddy) spot waiting for me. They had an entire show and shine area where most of the Jeeps were parked. Willys Jeeps were right up front. I was told they had 700 spaces for Jeeps in there, and 600 showed up. 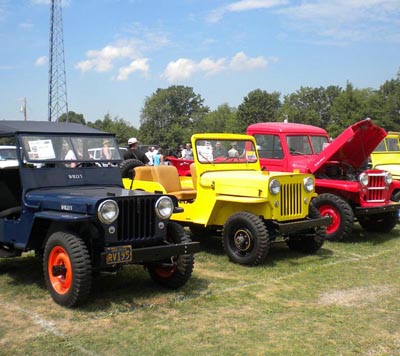 "The lineup of Willys Jeeps was impressive, well over 100. There were two Bantams down at the start of the row, and several GPW, MB, M38s and such down there also. Then the Willys trucks and CJ's. Note: the yellow 3B is Sebastian Lobo-Guerrero's '53 from Pennsylvania. In behind were the newer Jeeps and non-street-legal machines. It was a quick walk from our Jeeps to the others, maybe 75-100 yards.

"The big talk of the day was the parade and how many Jeeps and spectators there were. The numbers I heard were 1106 Jeeps in the parade and 35,000 spectators along the streets. Looked like Friday and Saturday were the big days to be there. By 5 P.M. Saturday, many of the Jeeps were gone. My buddy told me that when he got there Saturday morning, there were crowds around all of the Jeeps. When I got there at 2, the voting was over (a bit strange for a two day show). 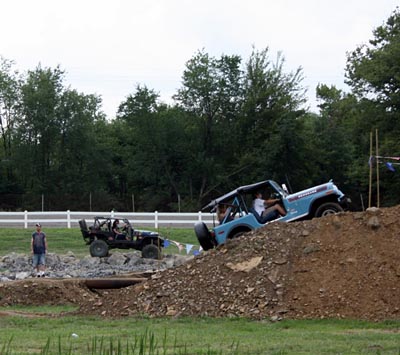 "Sunday, we got there around 8 and got set up. Everything was open by 9 and we walked through the vendors and bought a few things. There really only were two guys selling Willys stuff; the rest were vendors for the new stuff. There were also many, many food vendors (very high prices) and guys selling other things like tie down straps and such. We went over and watched the "Jeep playground" and some of the trails, and got to drive new Jeeps through the woods. It was a pretty fun day.

"Overall the show was a nice one; it was a good venue, easy to get around, everyone was pretty nice and the restrooms were easy to find. The negatives I saw could be tied to it being a first year event. The registration was kind of odd in that they would not let me pick up my buddy's forms (my wife told them she was his wife to get them), we were supposed to pay for my wife to get in but never did, and no one seemed to mind or even check. The rules said no coolers were allowed, which is ridiculous, but everyone seemed to have one. The only other drawback is that the hotels were pretty far away. I think the closest one was in Butler, which is 11 miles away from the fairgrounds. I'd say we'll go back to this show, but definitely Friday and Saturday."

While Bob was taking in the event, he managed to get photos for us of many of the CJ-3Bs in attendance, and it was a pretty good turnout. Mostly from around Pennsylvania, but also Ohio and even Florida. And several are Jeeps that we haven't seen before here on CJ3B.info.

Thanks to Bob Christy for the 3B photos and his story. Also Bob Brandon and Butler County Tourism and Sebastian L-G for the event photos. -- Derek Redmond

See our 2000 visit to Butler, in On the Trail of Jeep History, Part 2: Butler, Pennsylvania.