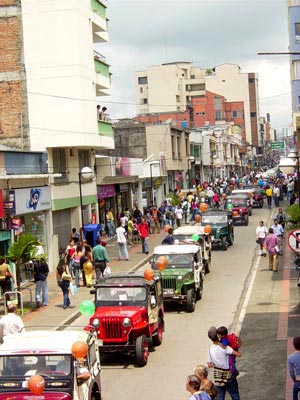 According to an article by Juan Andres Arbeláez Palacio, the attempt on 7 February 2006 in Colombia to set a Guinness World Record for the longest Jeep parade, was successful.

Organizer Juan Carlos Ospina wanted to bring 300 of the working Willys Jeeps from the coffee producing area of Colombia (see Java Jeeps on CJ3B.info) together in Armenia, the capital of Quindio state. In the end, 354 vehicles from across the country arrived for the afternoon parade. An AP photo shows some of the World War II jeeps brought by military collectors (80K JPEG). 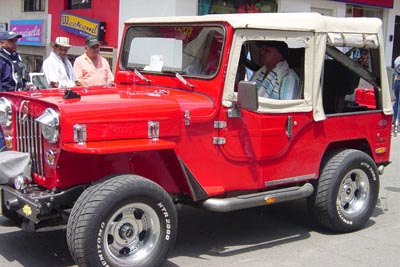 One of many CJ-3Bs in the parade was this tricked-out example with lots of chrome trim and one of those deluxe South American soft tops. 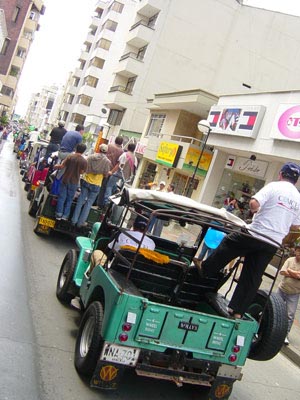 For years CJ3B.info has documented the unique role of Willys Jeeps in this area of Colombia (see Yipao: The Willys Festivals of Colombia). Juan Andres points out in his article that it is a major cultural phenomenon, and believes the parade has brought attention to it from around the country and the world. His only complaint about the parade is that some politicians in the middle of an election campaign tried to take advantage of the event to promote themselves. 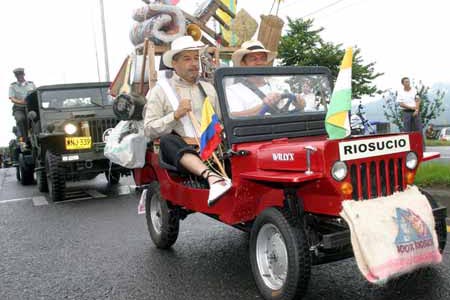 I'm not sure if this is a politician, but I'm thinking it might be the mayor of Rio Sucio, a city some 400 miles north of Armenia. This mini-high-hood is flying a Colombian flag on the mayor's side, and the flag of Rio Sucio on the front. The Festival of Rio Sucio, every two years in January, is another one of the country's big cultural events. 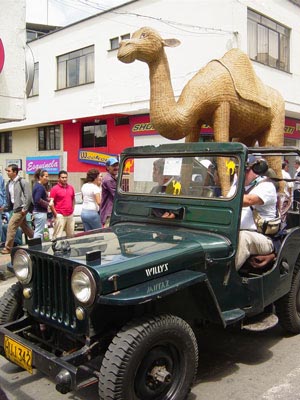 Definitely not a politician riding in the back of this nice CJ-3A. Camel stencils on the windshield as well as the camel in the back must mean something -- we'll have to try and find out what exactly. 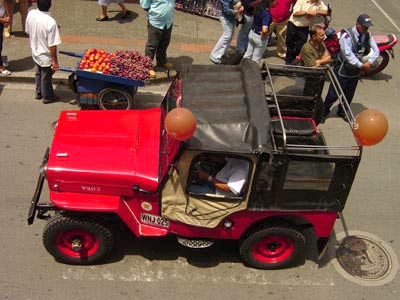 This soft top has the moon roof open.

Thanks to Federico Cavedo for letting us know about the parade, and Juan Andres Arbeláez Palacio for the photos. -- Derek Redmond

Return to Jeeps in Colombia or see more Willys Event Reports on CJ3B.info.