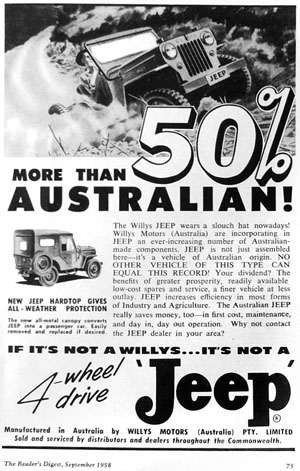 1958 was an exciting year at Willys Motors Australia, as the factory in Brisbane began production of completely Australian-assembled Jeeps, and the Army was testing the CJ-3B as a potential replacement for their fleet of MB's. Although the Army decided against the 3B (see The 1958 Australian Army CJ-3B Trials), Willys Motors Australia went on to build over 1000 short and long-wheelbase CJ-3Bs (see Willys Australia Serial Numbers.)

Back at Willys Motors in the U.S. the CJ-3B was a five-year-old model, so it might have been stretching things to advertise it in downunder as "new," and this may have factored in to the decision to promote it as "Australian made." This ad in the September 1958 Australian edition of Reader's Digest emphasized that the Jeep was not just assembled down under, but was "a vehicle of Australian origin," with an "ever-increasing number" of locally-made components. The right-hand-drive illustrations are based on photographs seen in the CJ-3B brochure below. 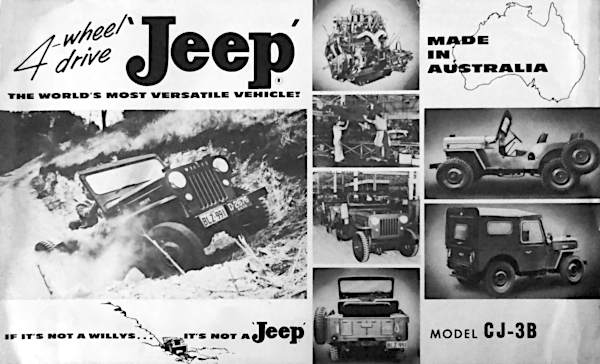 This brochure was also headlined "Made in Australia" and used the slogan that I'm surprised Willys in the USA never used: "If it's not a Willys... it's not a Jeep." The brochure included original photos showing right-hand-drive CJ-3Bs and the Brisbane assembly line.

Thanks to Michael Bowen for the scan. The reverse side has an extensive list of specifications (270K JPEG). 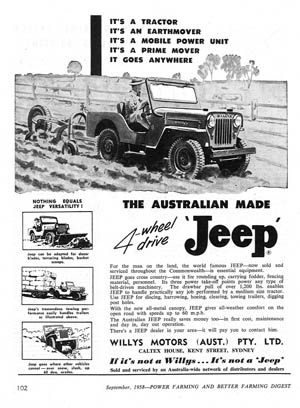 Willys Australia saw agriculture as a likely market for their Jeep, and placed this ad in Power Farming and Better Farming Digest in September 1958, just as Willys in the U.S. had advertised in Farm Journal in the early 1950s. It featured original, right-hand-drive illustrations, and stated, "For the man on the land, the world famous JEEP -- now sold and serviced throughout the Commonwealth -- is essential equipment." Thanks to Dom Serong for finding this ad.

Six years later, Bernie's Auto Sales in Lidcombe, New South Wales advertised Willys' extensive line of vehicles in Australia in an April 1964 ad in Power Farming (380K JPEG). Lidcombe is a suburb of Sydney, but the headquarters of both the NSW Rural Fire Service and the Dairy Farmers co-op are located there, and apparently Bernie's was a dealership that served the surrounding farming area. They offered to bring a vehicle to your farm for a demo. 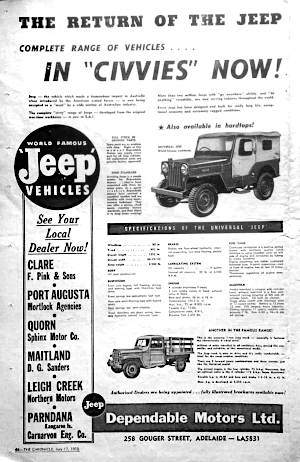 This was local advertising in South Australia, in the weekly newspaper The Chronicle for 17 July 1958. It focussed less on the Willys name and the percentage of Australian content, and more on specifications and dealer support. The headline "In Civvies Now" was obviously aimed at a population who remembered the jeeps brought to Australia by the Americans during World War II. 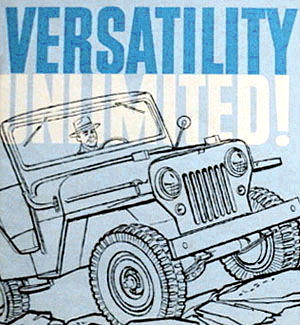 "Versatility Unlimited" was the cover of a folding 11x17" brochure (290K JPEG) containing standard Willys illustrations and text describing the Hurricane engine and Jeep four-wheel drive. Also included is a map (220K JPEG) of dealer locations across the country. Thanks to Vaughn Becker for the scan. 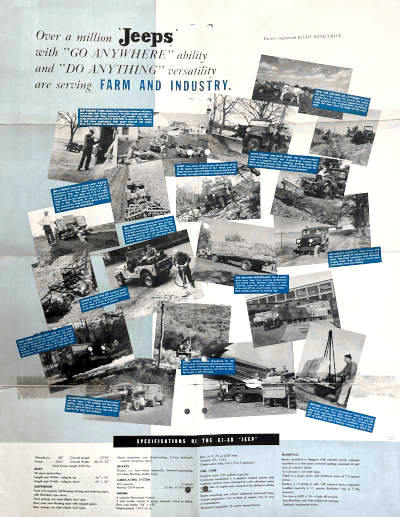 The reverse side of the brochure is a big collage of photos showing Jeeps working in farming and industry, some with special equipment attached. They all appear to be left-hand-drive, so the photos also presumably come from Willys in the U.S.A. If you look closely, some of the Jeeps are older flatfenders, or even CJ-5s, which had been available since 1954 in North America but were not being imported into Australia. Below the collage is a set of basic specifications of the CJ-3B. 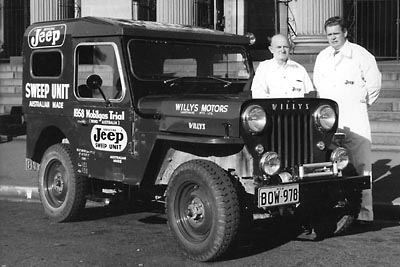 Looking for other ways to promote the new, locally-built right-hand-drive Jeep, Willys apparently offered to supply an official support vehicle for the 6th Round Australia Mobilgas Trial. This was one of the most prestigious of the long-distance rallies which were very popular in the 1950s. 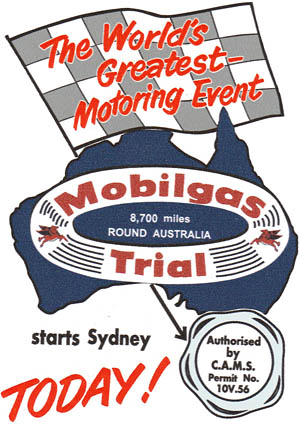 The 1958 Mobilgas Trial began on 20 August in Sydney, and ran around most of the continent until taking a shortcut across Queensland to Brisbane, where the Willys Australia staff must have turned out in force to see their "sweep unit" in action. After passing through Sydney again, the winners arrived at the finish line in Melbourne on 7 September.

The race garnered a lot of attention for some of the unheralded competitors. In one of the first uses in print of the term "Beetle" in reference to the Volkswagen sedan, Autosport magazine referred to the "victorious beetles" who took 1st, 2nd, 4th and 5th place in their class in the rally.

An even more dramatic impact was made in the sports car class, by the 1st and 4th in class finishes of a long-shot entry from Nissan in Japan, the Datsun 210 (70K JPEG). This was a major milestone in the development of the long, successful line of Datsun Z-cars. (See detailed race results at UniqueCarsandParts.com.au.) 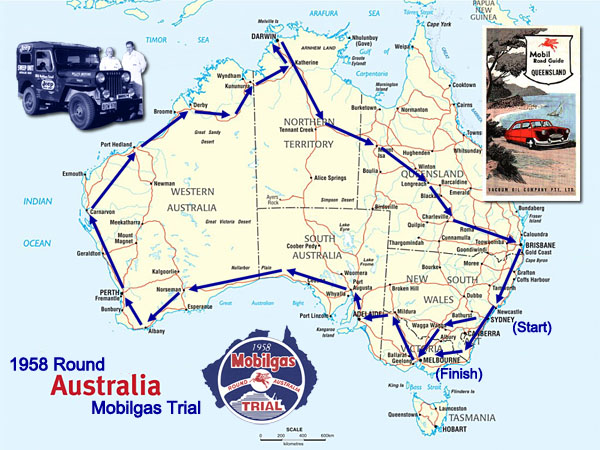 The 10,000 mile (16,000 km) rally stretched the endurance of the cars, and only half of the 67 entries completed the course. One driver, Jack Phillips, was killed when his Morris Major rolled on the section between Darwin and Tennant Creek. 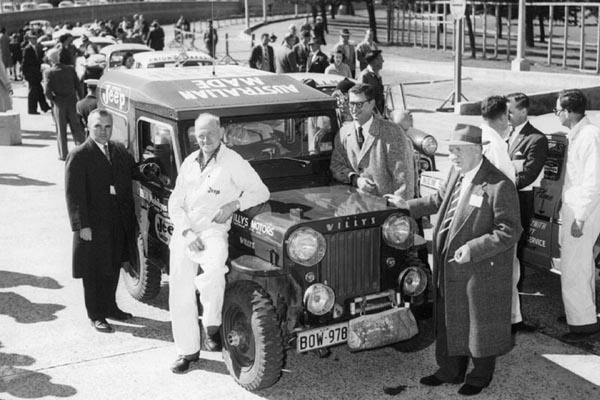 The difficult conditions of the rally would have made a good background for exposure of Willys Australia's new Jeep to press and public around the country. In this photo, VIPs pose with their sweep vehicle, now with headlight guards installed, and clearly identified for any aerial photographers as "Australian Made."

This Jeep has the notched Australian Hood Blocks which were installed on at least some of the CJ-3Bs assembled in 1958. 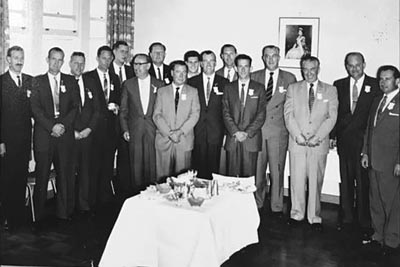 Reportedly there was more than one Sweep Unit built by Willys. Warren Jacobsen commented in 2018, "John McRae (former Willys Brisbane manager) told me he had full hand in preparation of these vehicles. The Yanks weren't happy about the hard top, which rattled like a tin can. He often talked about those sweep cars and was as proud as punch of them."

John McRae is seen fifth from the right in this photo of a group of Willys managers. Behind John is the gentleman in the striped tie seen wearing a hat in front of the Jeep above. Photo courtesy of Michelle Kopp. 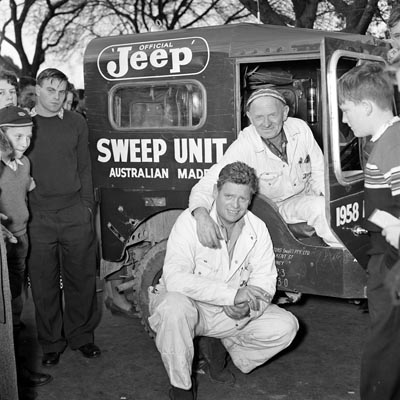 There could quite possibly have been one sweep unit to run ahead of the competitors, and one to follow them, although the photos here all show the same Jeep. I have seen no reports of how the Jeep(s) made out, but they were undoubtedly kept busy.

This photo was taken by Laurie Richards in Melbourne -- probably at the completion of the rally, judging from the wear and tear on the Jeep. Photo courtesy Museum Victoria. Can anyone identify the Jeep driver/mechanics? 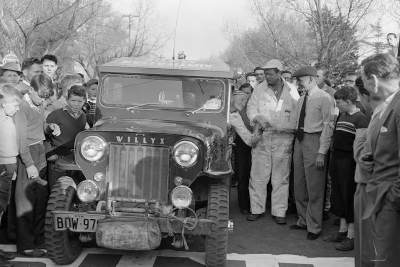 The Sweep Unit may also have been used at more than one rally. In this finish line shot the Jeep no longer has its hood blocks or headlight guards, but has a chaff screen. Photo courtesy Mick Broomfield.

The Australian distributors, Dominion Motors in Brisbane and Stokoe Motors of Melbourne, arranged for newspapers to review the first Jeeps to be available in significant numbers since World War II. See a large, readable copy of this review in the Sydney Morning Herald of 11 August 1958 (420K GIF).

A similar piece in The Melbourne Sun of 6 May 1958 (440K JPEG) was also a favorable assessment, again taking issue mainly with the quality of the conversion to right-hand-drive.

The Sydney Morning Herald followed up their review a couple of weeks later, with a multi-page feature on Willys Australia on 25 August, while the Mobilgas Trial was underway. It included ads from Willys and from many of the parts manufacturers who were supplying sub-assemblies for the Jeeps. 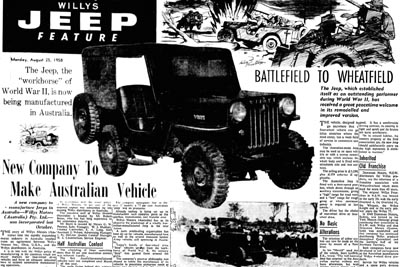 Page 11 (right, 800K JPEG) stated that Willys was producing Jeeps with over 50% Australian parts, and aiming for 75% within a year. It also included a half-page ad from Dominion Motors, listing all the Willys dealers in New South Wales.

Page 12 (1.1MB JPEG) had an article on the "Evolution of the Jeep", photos of "Jeep Celebrities", and a Willys ad announcing the Jeep being chosen as the Mobilgas Trial Sweep Unit! 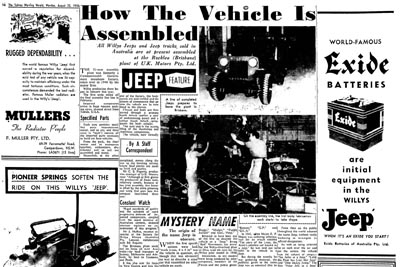 Page 14 (right, 900K JPEG) featured anecdotes from World War II, and photos and description of "How the Vehicle is Assembled" in the plant at Brisbane, where three crates provided all the imported parts necessary for six finished Jeeps. 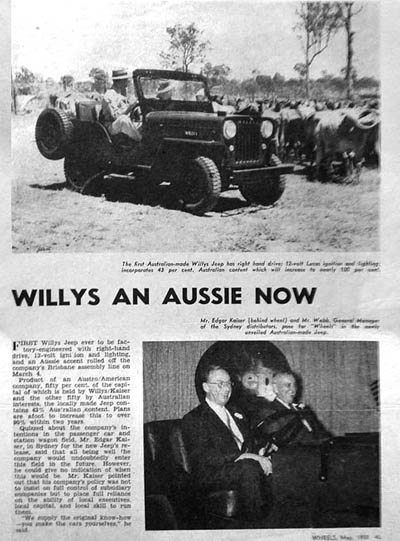 An article in the May 1958 issue of Wheels magazine noted that 50% of Willys Australia was owned by Willys Motors in the U.S., and that Edgar Kaiser, president of Willys Motors, came to Sydney for the introduction of the first Australian-built CJ-3B. That Jeep had rolled off the assembly line on 4 March, and Kaiser stated that passenger cars and station wagons would undoubtedly be introduced in the future.

Thanks to Justin Kennedy for finding this scan. 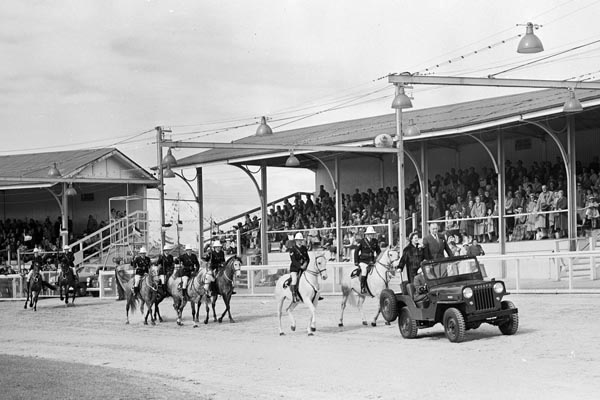 This great photo was taken at the Royal Melbourne Show, September 1958 in Melbourne, Australia. A procession entering the Showgrounds Arena in front of a packed grandstand is led by a brand new CJ-3B, escorted by the Victoria Police Mounted Branch. Check out the large copy (280K JPEG).

It was probably Stokoe Motors in Melbourne who arranged this "high profile" Jeep appearance, since Willys Australia was not headquartered in the state of Victoria, but in Sydney, New South Wales, and their plant was way up the coast in Brisbane, Queensland. 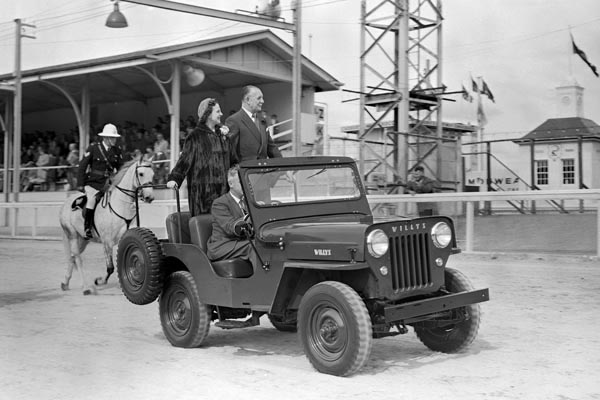 The Royal Melbourne Show is a huge agricultural exhibition, organized annually since 1848 by the Royal Agricultural Society of Victoria. Riding in the Jeep in 1958 was Sir Dallas Brooks, Patron of the Society and Governor of Victoria, with his wife Muriel.

The new Australian Jeep was driven by somebody familiar with the vehicle, maybe a Stokoe manager. I say this because he appears to be moving fairly quickly, and Sir Dallas and Muriel don't have much to hold on to, so he better be pretty smooth at stopping and starting. 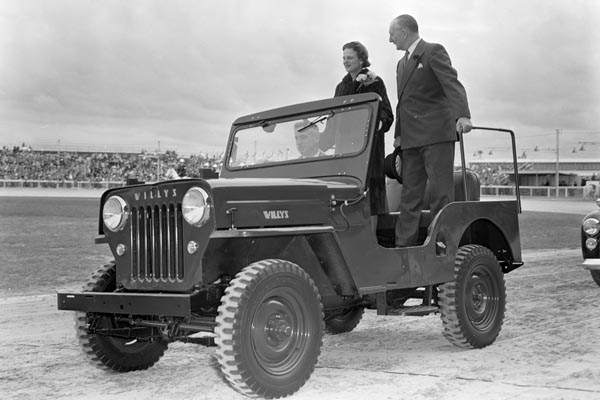 The parade apparently completed a circuit of the track, and the Mounted Branch headed out onto the field in the background to demonstrate their riding skills.

This is a great series of photos to have -- almost like factory photos of the Jeep, which has body color wheels. The photos are courtesy Museum Victoria, and were taken by Laurie Richards, who began his career as a newspaper photographer, and operated a successful commercial photography studio in Melbourne in the 1950s and 60's. 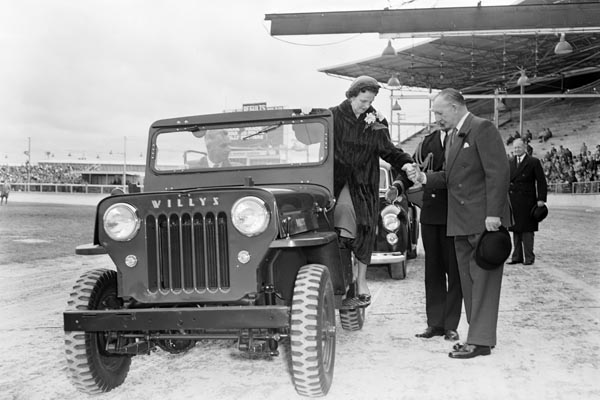 Luckily side steps were installed, and Muriel was finally assisted down from the Jeep by her husband. Born in England, Sir Dallas Brooks had been a First World War hero with the Royal Marines at Gallipoli and Zeebrugge, and later became Commanding General of the Marines. He was knighted in 1949, and served as Governor of Victoria from 1949 to 1963. He died in 1966, and the Melbourne suburb of Dallas was named after him. 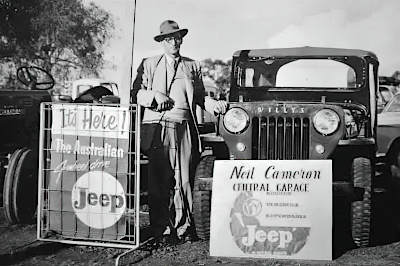 And so it fell to salesmen across the country to take the five-year-old "new" Jeep out to agricultural shows. This picture shows (perhaps) Neil Cameron at the 1958 Mulwala show, not far north of Melbourne, just across the border in New South Wales.