CJ-3Bs at the Port of Toledo

Jeeps Prepare for a Trip Overseas 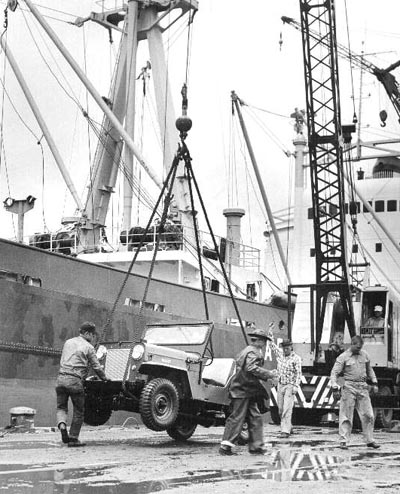 As one of the busiest ports on the Great Lakes, the Port of Toledo serves as an entry point for bulk and containerized goods imported from around the world. As of 2003, over 13 million tons of cargo went through the port annually, according to Crossroads of America.

Exports primarily include large amounts of bulk commodities such as coal, grain and iron ore, but in the past the traffic in manufactured goods was also significant. This included Jeeps from Willys Motors destined for export around the world, as seen in the mid-1950s photos here. The pictures are part of the Images in Time collection at the Toledo Lucas County Public Library.

In the photo at left, a CJ-3B touches American soil for probably the last time, as the crane operator gets the "take her away" signal. We can assume these CJ-3Bs are all for export, since those intended for North American dealers would likely be shipped by rail or truck. 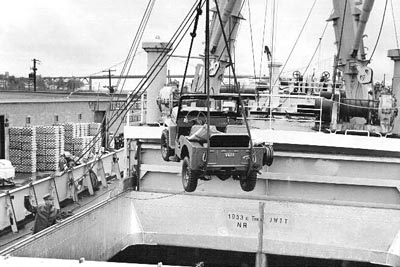 A Jeep goes down into the hold of the same ship. The packaging behind the front seats probably contains a canvas top and doors. There is a rear passenger seat included, but oddly there is no tire installed on the spare wheel.

The instrument cluster on the dashboard indicates a 1957 model or later, and in fact the date of this photo would be sometime after the completion of the St. Lawrence Seaway in 1959. Prior to 1959 the Jeeps would be shipped by rail to a port such as New York. 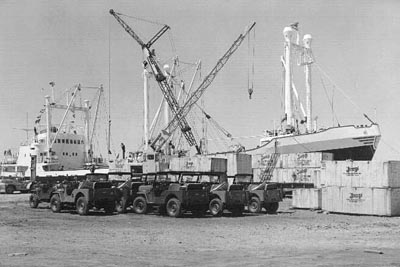 Another ship prepares to load a fleet of Jeeps, including many in crates. The crates probably hold CKD (complete, knocked down) vehicles requiring assembly; typically three crates held all the parts for six Jeeps. See also another photo of crates ready for loading (75K JPEG).

Production of the CJ-3B dropped in the mid-1950s as Willys concentrated on the new CJ-5, but rose again dramatically in the early 1960s, due in large part to increasing export sales. 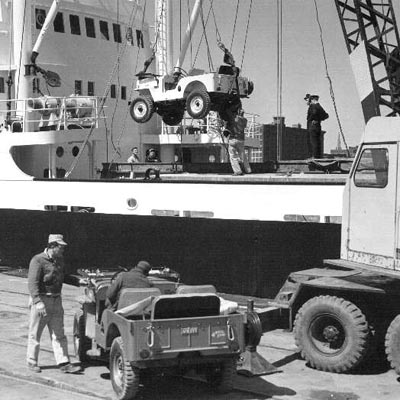 This is a closer view of the same ship, with two CJ-3Bs in the process of loading. It appears they are being driven right up to the ship under their own power. Also notable is the fact that both Jeeps have wheels painted body color.

The large building just visible in the background suggests that this dock was in the older section of the Port of Toledo, directly across the Maumee River from the city's downtown. 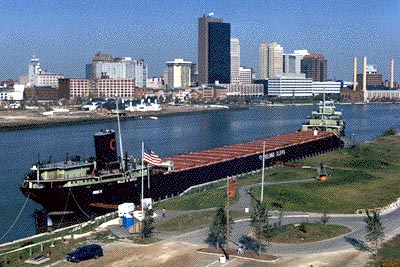 Toledo's 2000 population of 313,619 made it the fourth largest city in Ohio and the 57th largest in the United States. The glass and automotive industries are both major employers; in addition to Jeeps, automotive components are built by several other manufacturers. One is the Dana Corporation, whose parts such as axles and transfer cases are found in Jeeps and many other vehicles.

The port area across from downtown is now International Park, and the only large vessel docked there is the 617-foot S.S. Willis B. Boyer which has been a floating museum since 1987. She was the biggest and most technically advanced lake freighter in service when she was launched in 1911. By her 1980 retirement she was one of the smallest. 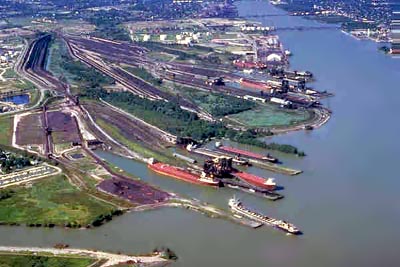 The deepwater port activity is now further down the Maumee River, where it empties into Lake Erie. Some of today's ships are over 1,000 feet long, carrying farm and mineral products to other U.S. and Canadian ports. Cargoes are transferred to ocean-going ships at the Port of Montreal for delivery all over the world. 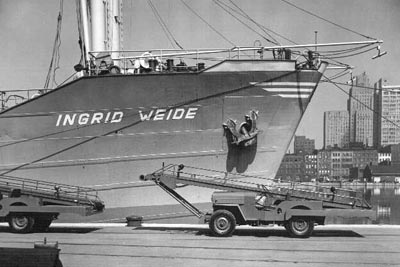 In this photo, again taken at the old port downtown, more than one conveyor-belt-equipped CJ-3B sits dockside waiting to be loaded onto the German freighter Ingrid Weide.

These Hoveyor Jeeps were built in South Bend, Indiana, and typically used for loading baggage at airports (see Airport Jeeps of the 1960s.) I would be interested in finding photos of these Jeeps in use at European airports.

A picture apparently taken from the bridge of the Ingrid Weide, shows a conveyor Jeep on its way down into the hold. . 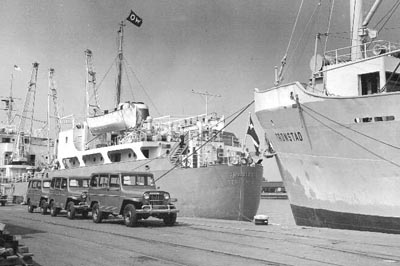 Some of the photos here were used in Globetrotter magazine from Willys-Overland Export Corp., July-August 1955. A caption states that the Ingrid Weide was taking the Jeeps to Gothenberg, Sweden. See the full issue at eWillys.com.

According to the Maritime History Archive, M.S. Ingrid Weide was a German vessel built in 1953 for the Flensburg-Stettiner line, and was wrecked 22 January 1976 off Borkum Island, West Germany.


For more details on Willys exports, see CJ-3Bs for the World.